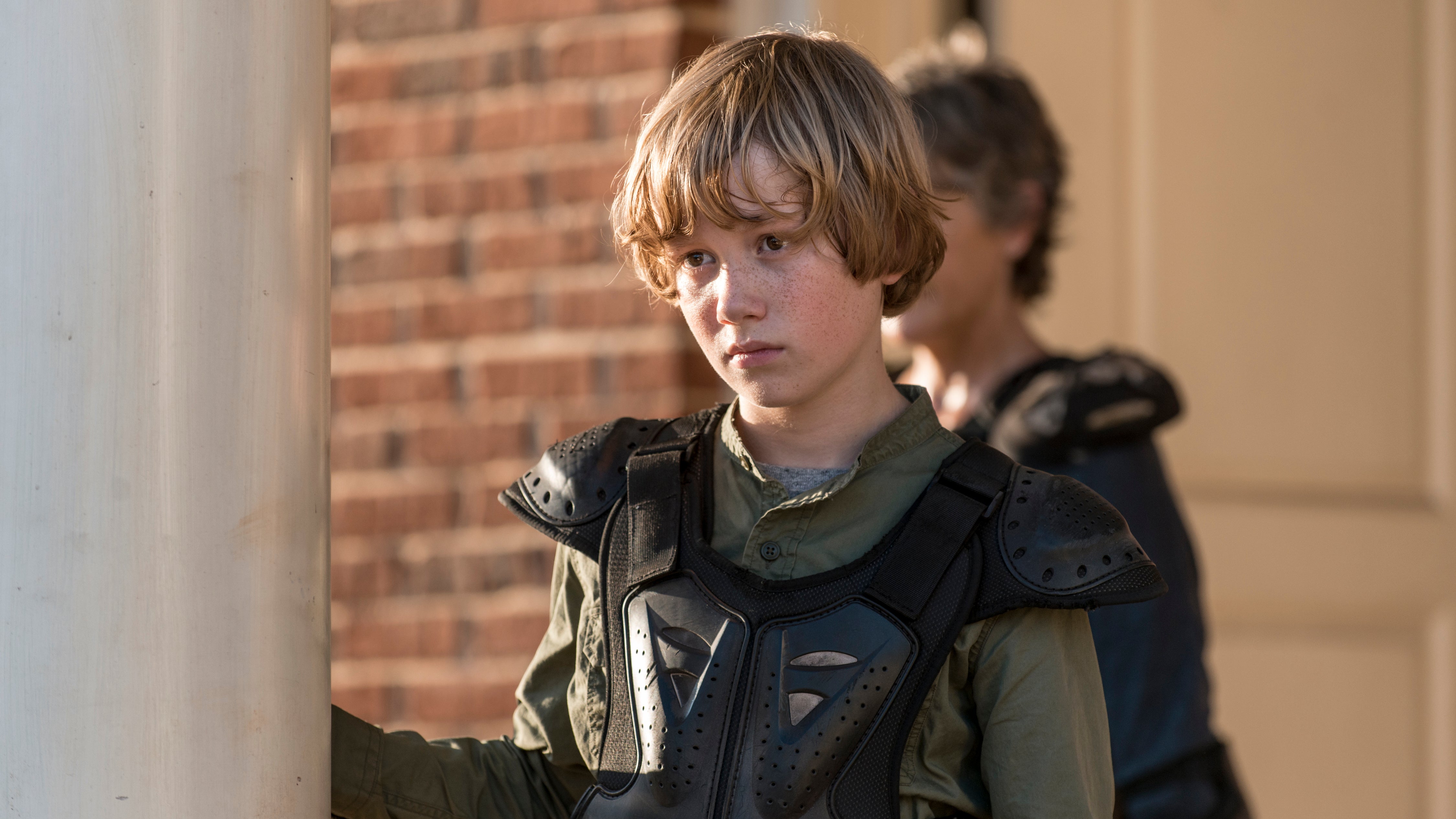 This is why we can’t have nice things.

Where to even begin? I’ll start with one tragic fact: I had to watch this episode twice. As a Super Important Walking Dead Reviewer, I get screeners of the show so I don’t necessarily have to write these recaps between 10:00PM-1:00AM on Sunday nights where I’m located. But between the Savior night attack and the midnight zombie garbage, this week’s episode, “Do Not Send Us Astray”, was just so dark I honestly couldn’t tell anything that was going on onscreen. So I watched it live, on TV, hoping that the brightness was fixed.

It was, but unfortunately, this allowed me to see in crystal clarity how goddamned idiotic this episode was. There was so much stupid packed in it that it’s kind of impressive. It’s so insultingly dumb that my head literally aches as I write this. Which sucks, because – well, because it was garbage and I spent not one but two hours of my life on it – but also because there’s a little bit of gold hiding in that pile of crap.

For instance: We got to see Maggie not just as the badarse leader of Hilltop, but as a badarse tactician. Simon leads the Saviors’ assault on the colony, but the Widow has an elaborate plan to wholly kick their asses – and it works, too. She blocks their vehicles with a school bus, has an assault-rifle-toting Daryl attack from behind them, and has positioned enough gunners that it genuinely looks like the Saviors are getting slaughtered. Eventually, her forces retreat into the mansion, knocking out the lights and going silent. Maggie (Lauren Cohen) looks how I feel after watching the episode.

Unfortunately, Maggie’s cunning plan and success is marred by the fact that despite that first round of being outmaneuvered and killed, the Saviors – suddenly and idiotically believing that the Hilltoppers might have all fled in the last 80 seconds or so even though they were winning – creep en masse to the mansion, only for Maggie to throw on a ton of lights and gun them down again. And when Simon orders the retreat, they run right into another group of Hilltoppers, led by Rick, who gun them down some more.

Weirdly, despite the lengthy slaughter, it seems like 80 per cent of the Saviors manage to escape, but whatever. It was very cool to see Maggie in General mode, with a somewhat elaborate battle strategy that defended Hilltop while taking out the largest number of enemies possible. I honestly don’t think Rick could have come up with this plan, even on his best days.

Again, since this is The Walking Dead, we can’t have nice things, and the good guys manage to suffer even after a major victory. Because per Negan’s instructions, the Saviors covered their melee weapons and arrows with zombie guts, so anyone who was cut or scratched with them turns into a zombie the next night, beginning with Tobin. Remember Tobin? I sure as hell didn’t. After a Walking Dead Wiki search (which should, in a just world, be called The Wiking Dead), I discovered/remembered he was the middle-aged gentleman who was kissing on Carol back in season six, but who got dumped and since then has been a completely unmemorable background character. Suffice it to say the show’s attempt to make me feel Tobin’s demise was a tragic moment did not succeed. 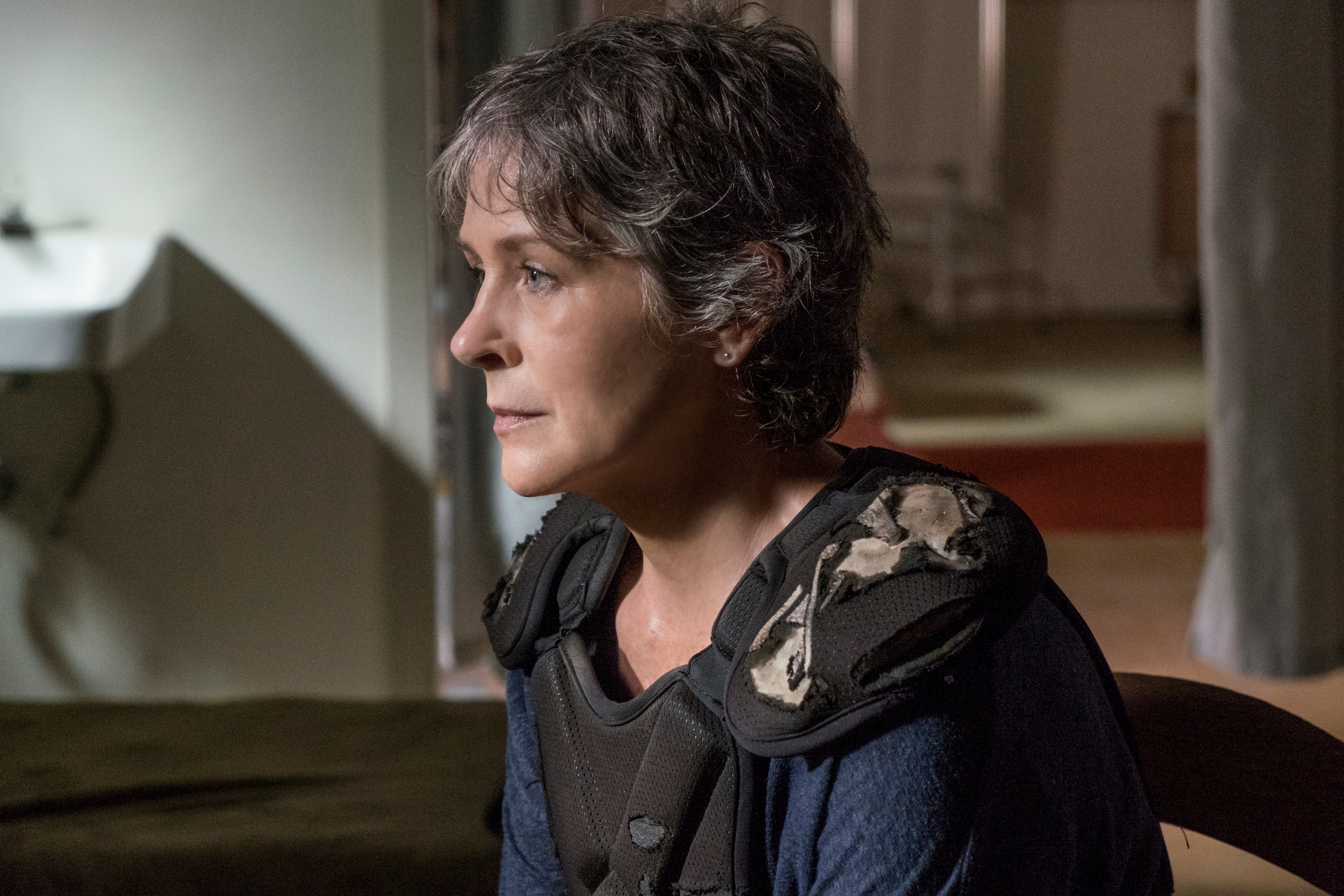 Carol (Melissa McBride) ponders whether Henry needs to look at some flowers.

Here is where the episode’s blood-soaked nincompoopery truly begins.

Let’s be fair: This show has given us a steady stream of inexplicably stealthy zombies; they have been used for jump scares, which are part and parcel of horror in general. But it’s never given us zombies that are essentially ninjas. They cannot be seen. They cannot be heard. They shamble through the mansion undetected, killing in silence, because they are Stealth Zombies.

It’s both insane and imbecilic how much havoc they manage to wreak before someone finally notices them. Here’s everything that needs to not happen for these zombies to do all the damage they manage to achieve:

1) No one can be awake and/or on guard anywhere in the house.

2) No one can scream when they are bitten by a zombie, even when the zombie is not biting their jugular and they could easily scream should they wish to, which you think they might wish to because, you know, they are being eaten alive.

3) No one in the house, which is dead silent because literally everyone who isn’t undead is fast asleep, can hear any of the multiple zombies walking around or attacking people, or doing their constant zombie growls.

3a) No one in the main foyer, where is apparently where almost everyone who isn’t a main character sleeps in a giant hamster pile or some crap, can wake up even when a zombie falls down an entire flight of stairs located in the same goddamn room.

I have become enraged again just typing that. I had to watch it three times just to make sure I was seeing it right. A zombie falls down a full flight of stairs, lands mere metres away from a group of 15+ sleeping people, and none of them wake up until the zombies all get a chance to eat somebody first. (To put in role-playing game terms, they all get a free attack.)

But that isn’t all! Because Henry, the wee lad whose brother was murdered by a rockmelon and killed Gavin in the midseason premiere, decides he doesn’t believe Morgan’s promise that he already avenged his sibling, grabs an assault rifle that people just left sitting around, heads to the gaol, and says if someone doesn’t admit to killing his brother he’s going to gun them all down. 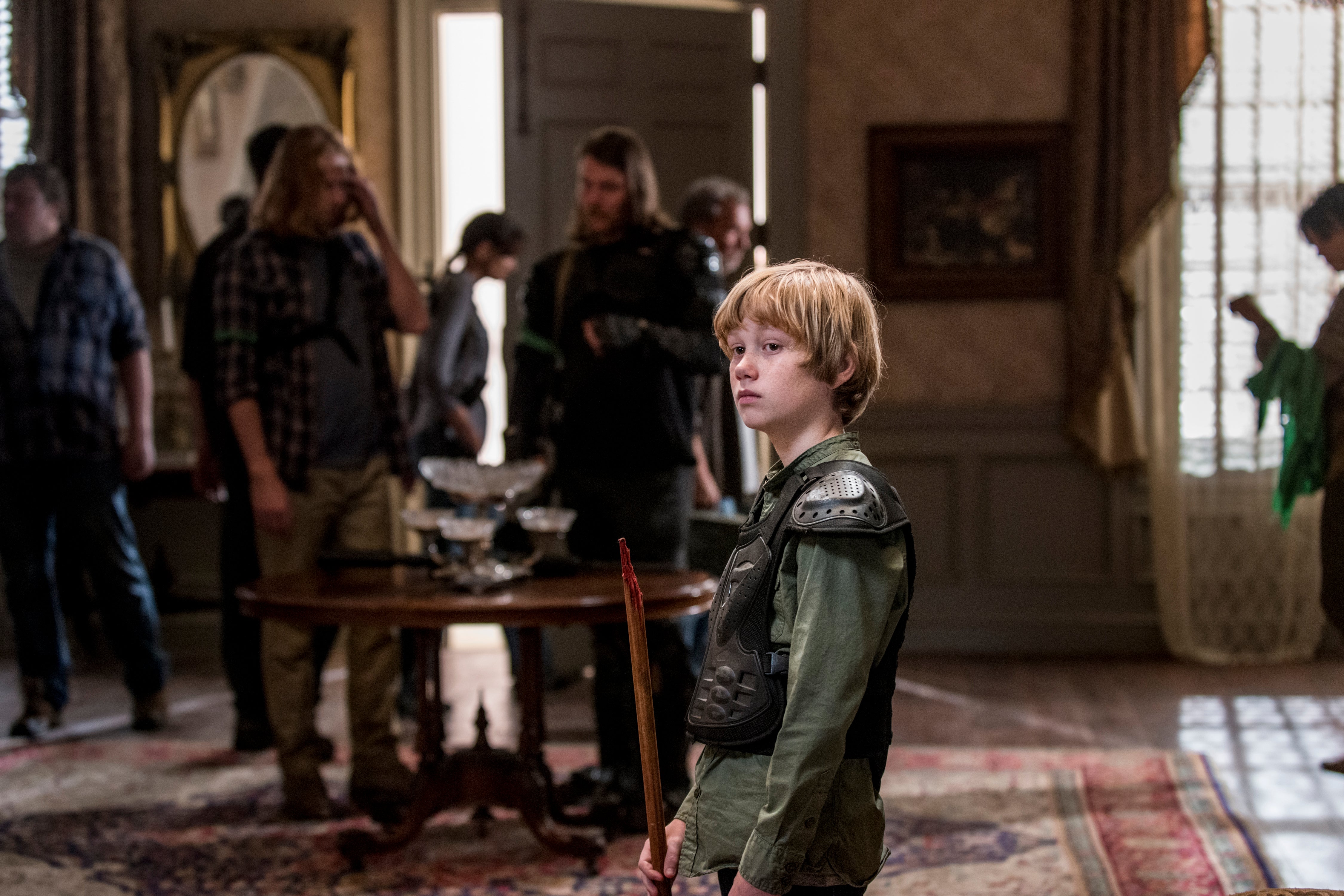 This is stupid, but it’s a reasonably stupid decision for a child irretrievably broken by growing up in the zombie apocalypse to make. Hell, even hanging out with the nightmare that is Morgan for an afternoon would probably lead anyone to want to murder somebody, just by proxy. No, the unbelievably imbecilic part is when Henry unlocks the prison door and steps inside.

I am terrible at guessing ages, but the child actor who plays Henry, Macsen Lintz, is 11, which seems like a plausible answer. And sure, preteens obviously are still learning about the world and maths and science. And who even knows about what kind or how much education he got growing up in the Kingdom. But I still feel he’s old enough to have the spatial awareness to understand that you don’t need to step inside a prison to shoot people when you can fire bullets through the fence.

Shocker: The prisoners knock over Henry and escape, and most of them flee into the night, while a few (led by good prisoner Alden of course) stay to help close the Hilltop gate to prevent zombies from getting in. The next morning people realise Henry is missing, either taken by the Saviors during their escape or having fled into the woods himself out of shame. I’m fine with either scenario.

Next week I will continue to get paid to watch and recap The Walking Dead, and thus will do so again. But right now, if I didn’t have that obligation, I would rage-quit this show so damn hard. Yesterday’s episode was so tremendously idiotic that I want to push it down the stairs. But clearly, it wouldn’t wake anyone who makes the damn show up. 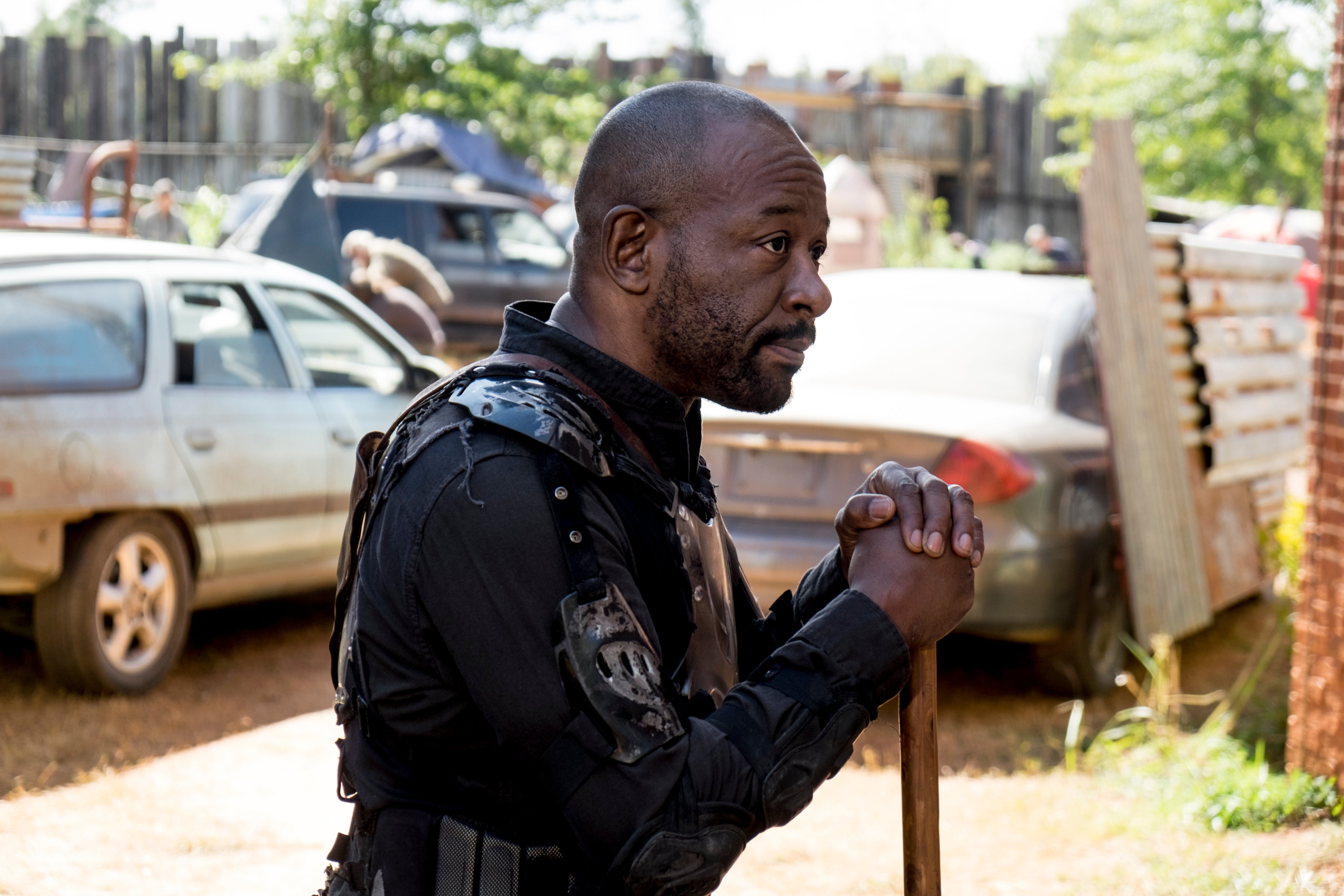 Morgan (Lennie James) wonders if things are less terrible over on Fear the Walking Dead.