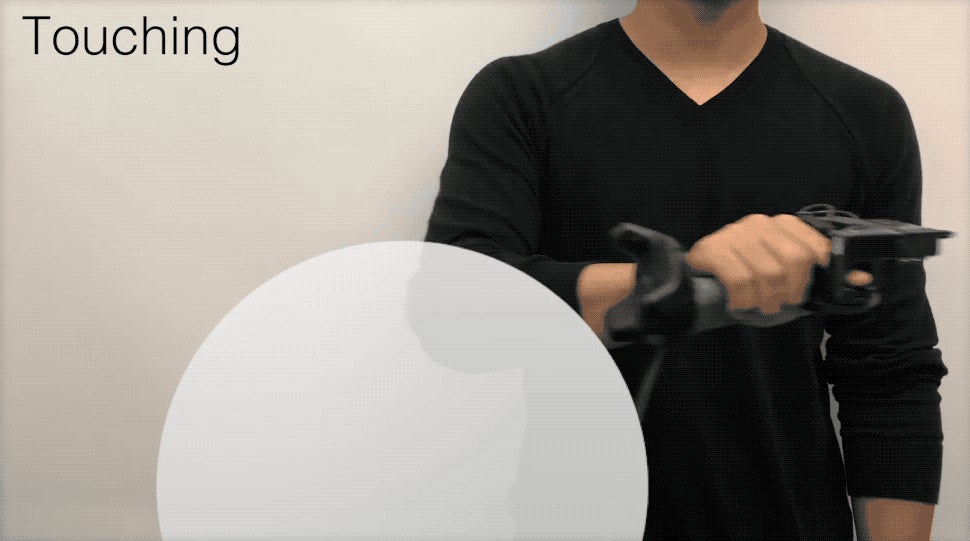 What Microsoft Research lacks in cinematography skills, it’s making up for with super-fun solutions to virtual reality’s biggest problem: The lack of real-world feedback. In a blog post published late last week, Microsoft detailed four different experimental methods for delivering haptic feedback, including a cane that would allow the visually impaired to “see” in VR, and a claw (simply named CLAW) that lets users actually interact with and feel objects in the virtual world.

Virtual reality might be legit way to give people novel experiences, but it’s still all a virtual world lacking tactile sensation. An hour in VR is like swimming in a sensory deprivation tank. You can dodge all the bullets and punch all the bad guys or do something as simple as drive a car, but it still doesn’t feel right. Microsoft’s CLAW wouldn’t perfectly replicate the real world in the virtual one, but it’s a huge step forward.

The CLAW allows a single finger to feel the things it interacts with in VR using a combination of servo motors, force sensors, and perhaps the most cool, a voice coil actuator. The voice coil actuator is positioned under the fingertip and vibrates to replicate the feeling you get when you run your finger across a rough object.

The force sensors and other motors are employed to let your finger experience the sensation of squeezing squishy stuff or “feel” the shape of objects. There’s also a mode to give you force feedback and replicate the sensation of shooting a firearm.

This all sounds really cool, but will probably not be as awesome in practice. Have you ever shot a gun repeatedly over the course of an hour? It’s a numbing experience. The kick of a gun in your hands is reminiscent of the sensation of hitting a fastball with an aluminium bat. It tingles and after a while, if you aren’t careful, it can hurt. Shoot long enough over the course of a day, and you can even get blisters.

That isn’t something I would actually want to replicate in a virtual world. Action heroes are, you know, sweaty tank top wearing folks with big arm muscles and impressive stamina. They actually can shoot guns for hours at a time and have no problem fighting bad guys forever. What they do in movies and video games is exhausting, and that is part of the fantasy that I don’t think most consumers of VR actually want to partake in. But it seems to be a focus on where to take VR next. (Consider Sony and HTC’s respective VR guns last year.)

Now besides the trigger mode in the CLAW that lets you feel like you’re shooting a gun, reproducing real-world violent acts in a virtual one is a big focus of Microsoft’s rather ingenious Haptic Links, too.

Haptic Links is designed to provide tactile feedback and bind two controllers together using an actual physical link between the two controllers (see above). This lets you replicate the feel of controlling a car or motorcycle, or even a trombone – with the two controllers reacting to each other as if they were physically one object. But the video spends a lot of time focused on how you could use Haptic Links to fire a bow and arrow, or go from the feel of wielding dual pistols to rocking a pump-action shotgun.

At least, unlike the CLAW, it isn’t aiming to replicate the more exhausting elements of the action hero lifestyle. Yet both are bumping up against a new potential question in VR game design. In the quest to make video games more realistic, where do you draw the line between make believe and painful reality?

Not all the projects Microsoft showed were focused on virtual violence. The Haptic Revolver incorporates a small wheel that rotates so the corresponding texture in the virtual world is always right under you finger in the real world. If you’re reaching for a playing card it would rotate under finger, then the wheel would move around to felt as your hand skated over the surface of the table. It’s the one project that feels more like a proof of concept than something that could be turned into a product in the near future.

Of the four projects, the Canetroller is the one that looks like it could and should be more than a research project. The Canetroller is all about accessibility. It uses a headset for tracking as well as a shortened white cane such as a visually impaired user would already own, which is then attached to a braking mechanism worn around the waist. The brake automatically stops the cane when it bumps up against objects in the virtual space. It also employs spacial audio, so a user wouldn’t just feel the things they’d strike the cane against, they’d hear the objects as well.

With projects such as the Canetroller and CLAW, Microsoft is showing that the gap between the real and virtual world is closing. We don’t yet have a Holodeck, nor are we close to the VR nonsense happening in Ready Player One. But these projects show that there are potentially more realistic ways to interact with the virtual world.