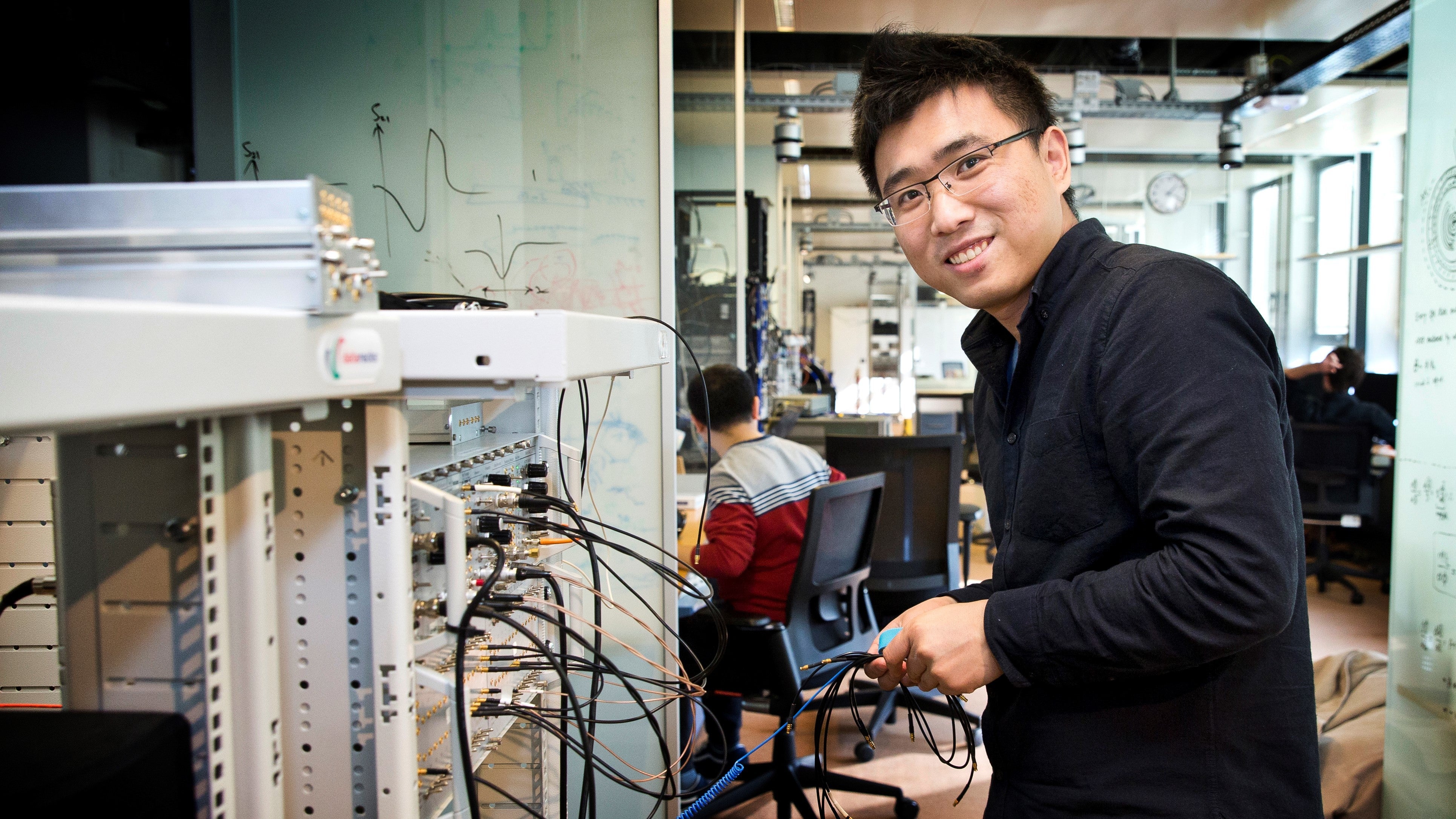 Microsoft just announced a quantum-computing advancement today: A measurement that looks like an electron split in half in a piece of wire. It will be of central importance if the company hopes to create a working quantum computer.

Big companies such as IBM, Google and Intel (and even a few startups) have built quantum computers with multiple qubits. It may appear that Microsoft is lagging behind – it hasn’t even debuted a single qubit yet! But Microsoft is working on its own quantum computer that incorporates brain-melting physics to overcome challenges plaguing the competitors. If it gets everything working, this could be a really big deal.

Quantum computers are machines that use the basics of quantum physics, the physics of the smallest particles, to perform calculations difficult or impossible for regular computers to do. While you may have heard of machines with as many as Google’s 72 qubits, those are imprecise. The tiniest vibrations or energy from the outside environment could lead to an error in the calculation. But Microsoft’s “topological” quantum computers might drastically reduce that noise. Its researchers are making some advances this year, including a paper published this week in Nature, and they think they will have working qubits by the end of the year.

“One of our qubits will be as powerful as 1000 or 10,000 of the noisier qubits,” Microsoft’s Julie Love, director of quantum computing business development, told me a few weeks ago in a Microsoft boardroom near New York’s Times Square.

Computers calculate with bits – two-state systems, like a coin that can either be heads or tails. A quantum bit, or qubit, is the same, except the coin is flipping in a black box during the calculation. You’re allowed to set some initial values on each side of the coin – complex numbers of the form a+bi like you learned about in high school that, when manipulated, output how likely the coin is to land on heads or tails. You only know the value of the coin when you open the box. Computation is done by putting several coins tied together in the box at the same time and interacting them in a way such that those initial values combine mathematically. The output now relies on all of the coins, which makes certain combinations of heads or tails more likely and certain ones forbidden.

This system could be useful for a lot of things, such as advanced chemistry simulations or artificial intelligence. But the key is finding a sort of quantum heads-and-tails system where the two states can form a superposition (the black box), entangle (tying the coins together), and interfere (the likelihoods changing when coins are combined in the box). You also must find a system where the coins continue flipping even if you nudge the box, or find a way to build in redundancies to account for the nudges.

Microsoft researchers think that the key to overcoming the nudging problem is a topological system. We’ve written about these before: They are engineered systems that retain some inherent qualities regardless of how you change them. They are so-called topological objects.

The researchers first needed to build their topological object. Microsoft specially fabricated a piece of semiconducting wire made of indium antimonide, surrounded by superconducting aluminium. Cooling this wire to near-absolute zero in a magnetic field bestows the electrons with a collective behaviour that forces certain electrical properties to take on discrete values. 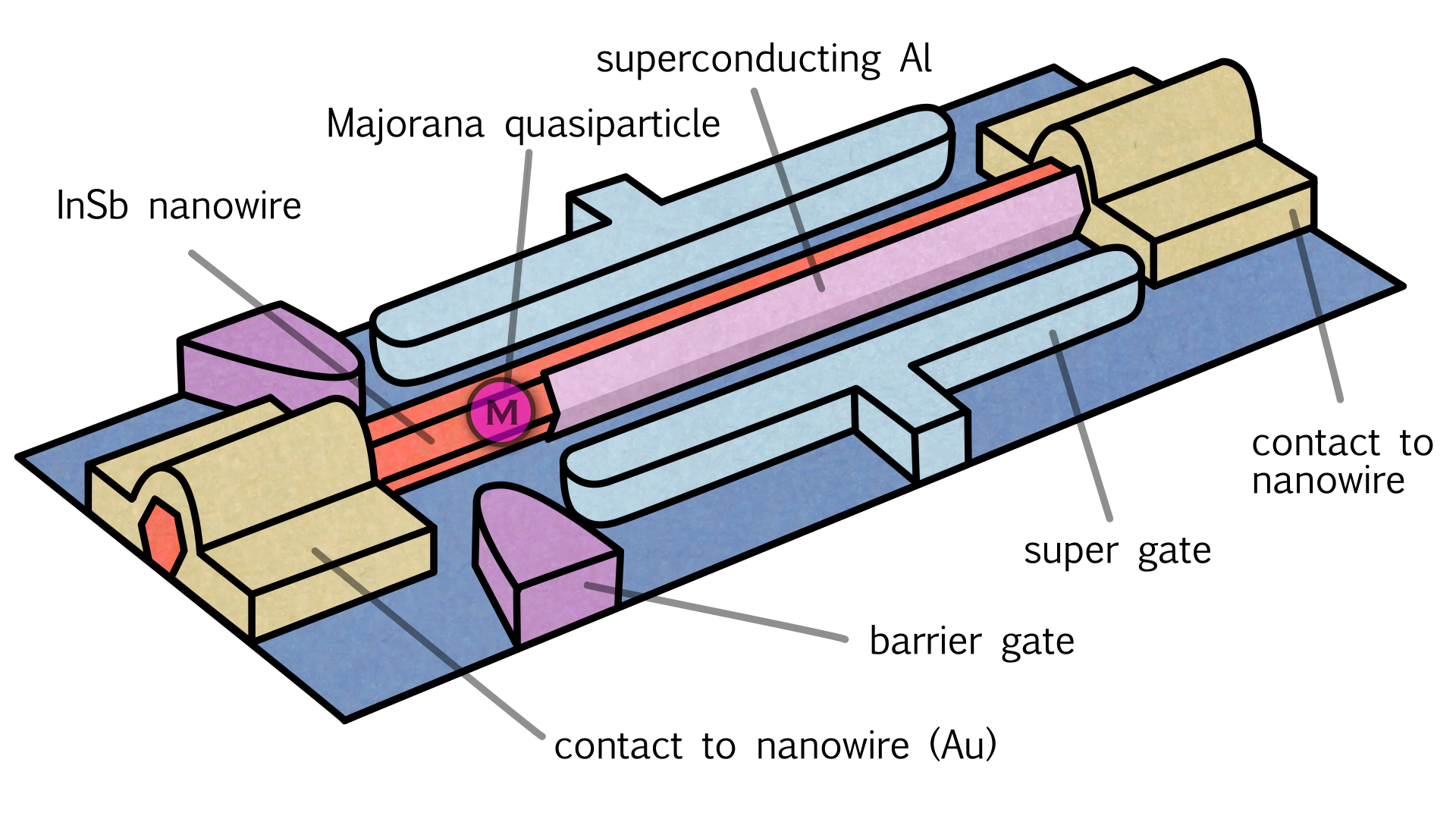 A schematic of a topological qubit. Graphic: Microsoft

The quantum information would be stored in this system not in any single particle, but in the collective behaviour of the entire wire. Manipulating the wire in the magnetic field could make it appear that half of an electron, or more accurately, a particle that’s halfway between an electron and not an electron, sits on either end. These so-called Majorana fermions, or Majorana zero-modes, are protected by the collective topological behaviour of the system – you can move one around the wire without affecting the other.

These Majorana zero-modes also form the two qubit states. If you bring them together, they either turn into zero particles or one full particle.

That’s the advance that Microsoft-affiliated scientists at TU Delft and other universities are reporting this week. They have observed rather robust evidence of the existence of these Majorana zero-modes, electron halves, in their wires.

If you’re reading but kind of lost, it’s essentially that Microsoft developed a system of atoms that look like they have half of an electron on either end. Their special setup doesn’t fall apart to quantum noise when you move either electron half around. Put the electron halves together and you get one of two qubit states: Something or nothing.

But that’s just creating a less static-y system. There’s more to go in order to actually do quantum computing. “We need to move two Majoranas around each other, such that the resulting effect of that exchange should exhibit non-abelian statistics,” Microsoft and TU Delft researcher Leo Kouwenhoven told Gizmodo. You need to actually manipulate the Majoranas in some way.

Don’t freak out about that non-abelian bit. All “non-abelian” means is that if you perform two different operations on the Majoranas, changing the order will return a different outcome. If you flip your phone away from you and then rotate it to the right, it will face one way. If you rotate it to the right and then flip it away from you, it will face the other way. That’s a non-abelian set of operations. Basically, you can get different measurements on the Majoranas if you swap them in different ways.

Technically you need four of these Majorana particles, at least, to do any quantum computing. Let’s say all four are arranged on four corners of an H, with two of those special wires linked in the middle. If you swap the top two Majoranas, and then the side two Majoranas, you’d measure something different than if you swapped the side two first.

This swapping action is called braiding. It’s essentially the tying-together of coins in the black box I spoke about above. The reason it must be non-abelian is that the laws of physics say that every particle is exactly the same – so setting up this system with regular electrons and swapping them around wouldn’t retain any knowledge of what happened before. But these Majorana particles’ non-abelian-ness means they retain a memory of what happened before, which lets you tell your qubits apart and calculate with them.

The researchers have yet to demonstrate the braiding, but Microsoft’s corporate vice president of Microsoft Quantum, Todd Holmdahl, previously told me that they expect to make that discovery within a year.

It’s important to note that these topological qubits can’t do everything that other qubits can do yet, said Kouwenhoven. If you consider every possible combination of two quantum state as points on a sphere, these swapping operations can’t hit every point. But, Kouwenhoven hinted, “we have a plan.”

Physicists not involved with the research were excited about it for several reasons. “I think this paper is a big deal,” Smitha Vishveshwara, associate professor in the Department of Physics at the University of Illinois at Urbana-Champaign, told Gizmodo. She thought braiding could be around the bend or a little further away: “Many steps still have to fall into place. But every time a new step is confirmed I think it’s thrilling.”

She was equally as excited about the physics itself. These “Majorana particles” were originally theorised to exist in free space as their own antiparticle. Majoranas haven’t been discovered in empty space, but it’s cool to spot their analogue in a system like this.

Microsoft has invested millions of dollars to quite literally discover new physics in highly engineered systems in order to get its quantum computers to work. This sort of explains why Microsoft doesn’t have a working pair of interacting qubits yet, though it has been simultaneously working on hardware and a user-facing development kit with a programming language.

Microsoft is confident that if it gets everything up and running, it will have the best qubits of all and will be able to quickly catch up to competitors. “We have a stable qubit, more stable than the other guys’,” said Love. “You can build a house out of bricks or two-by-fours, but that’s not what we build skyscrapers out of. Our qubits are like steel.”