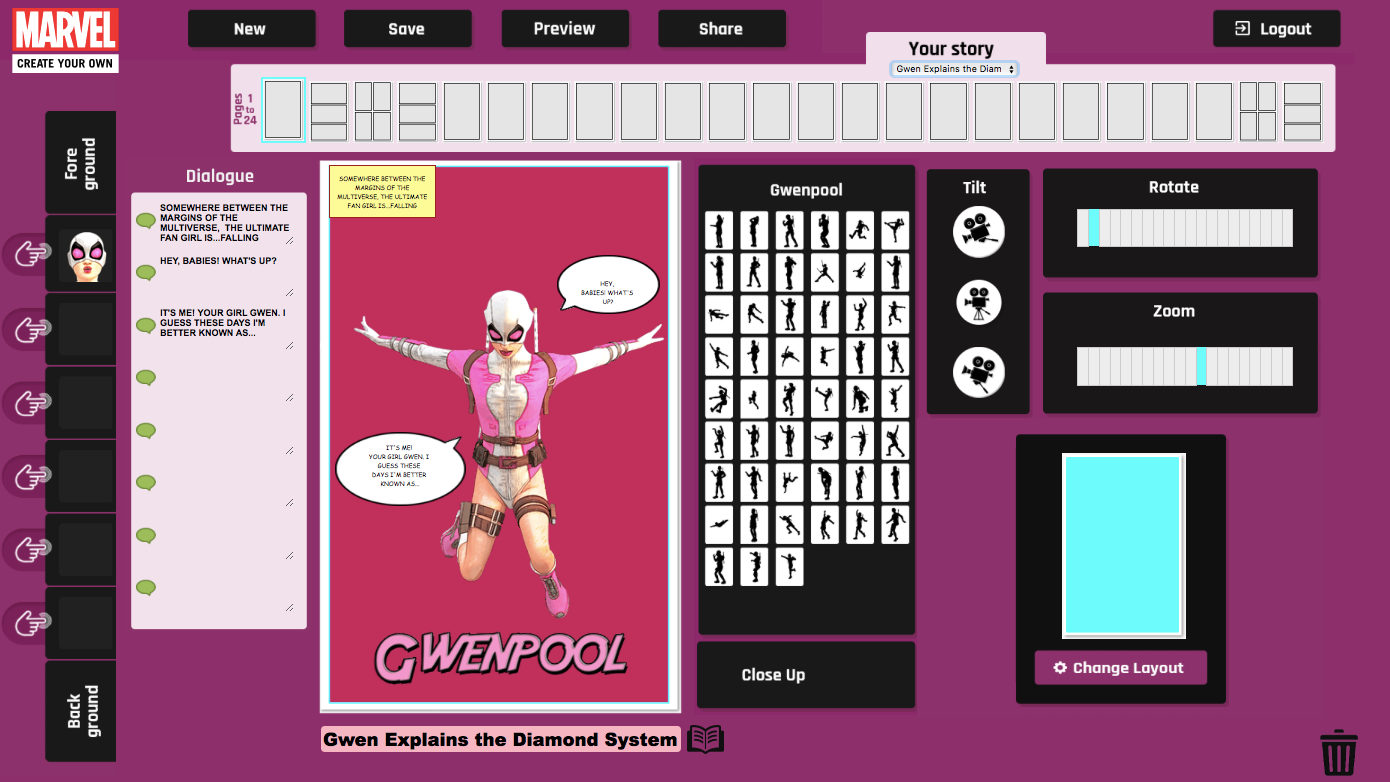 For many people who dream of creating comic books, the biggest thing standing in their way is the fact that they don’t really know how to draw or don’t have an artist to collaborate with. It’s an unfortunate consequence of fate that Marvel wants to help address with its new “Create Your Own” tool. We took a spin around the Beta release and were met with more than a few roadblocks to creation.


The control console for Marvel’s Create Your Own tool. Image: Marvel

Create Your Own is an online tool where users can make their own comics starring a whole host of Marvel characters. Each page can be arranged in a variety of ways with different numbers of panels, and each panel can be filled with posable character models, speech bubbles and sound effects. When you open the digital workspace for the first time, you’re greeted with a sample comic that explains some basic keyboard shortcuts and shows off what Create Your Own can do.

A selection of characters available in Marvel’s Create Your Own. Image: Marvel

Once you select a character you want to place into a panel, you’re given the ability to tilt and rotate them in three dimensions and scale them up and down in order to create perspective. Though fully-illustrated backgrounds would have been a nice touch, Create Your Own mostly offers a series of real-life photos of scenery that have been embossed, colourised and flattened to look somewhat comic book-like. But Create Your Own isn’t meant to make visually stunning comics – it’s a simple tool designed to help you get out those weird, silly comic ideas you’ve had knocking around inside your head.

The unfortunate thing is that Create Your Own isn’t particularly good at that, either. If you’re familiar with manipulating layered images in photo editing programs such as Photoshop or GIMP, then you immediately understand what Create Your Own is going for and see that the website just isn’t built particularly well. The only way to manipulate a character’s size or orientation is to fiddle with a set of predetermined switches, and there’s no clear way of moving visual elements forward and back into the page at will, meaning that you can’t guarantee that things will be layered properly.

The character models don’t exactly look like the illustrations you’d see in a comic book either – they’re a lot more like re-purposed models from a video game. Also, only a handful of characters, such as Spider-Man, Gwenpool and Moongirl, are available to use for free. Most everyone else will cost you $US2.99 ($4) each to unlock. 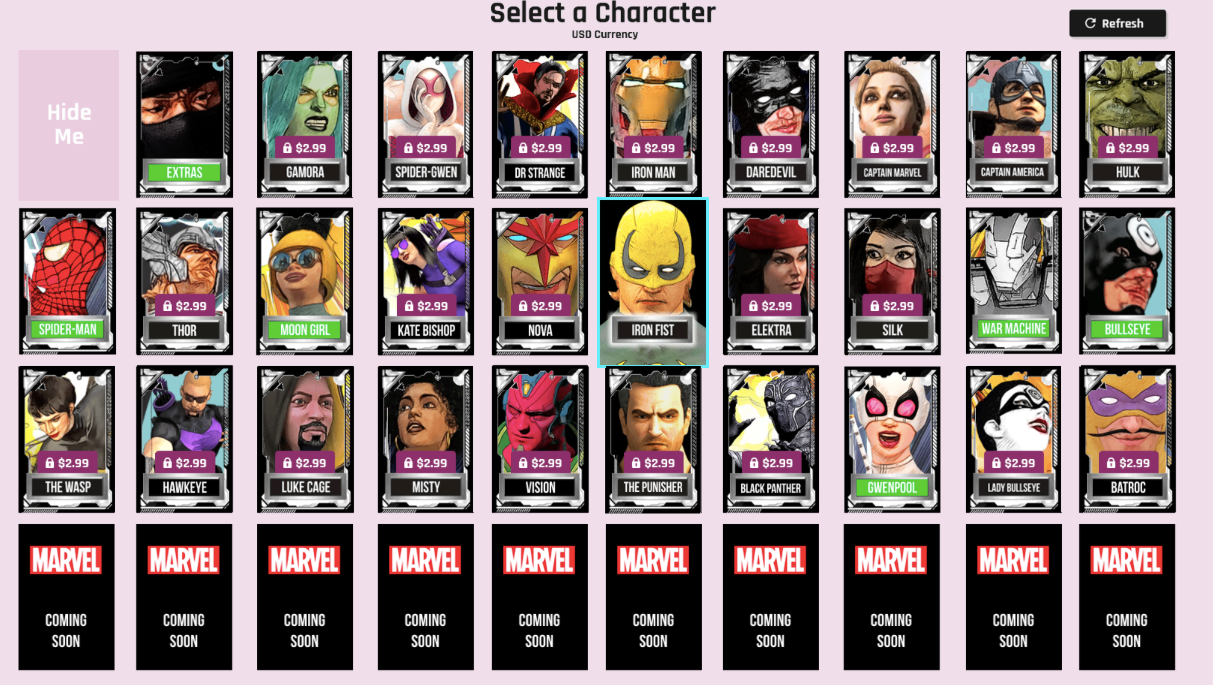 The roster of characters available for purchase on Marvel’s Create Your Own. Image: Marvel

Entering text is a nightmare because you have to guesstimate whether your words will actually fit into the standardised speech bubbles, the size of which cannot be independently altered.

There’s a bit of a learning curve to Create Your Own, and not in a good way. After poking at its unintuitive and inconsistent design in frustration for a while, you’ll feel yourself beginning to learn to work around the tool’s more glaring flaws. You get into the habit of copying and pasting your text lines because the input box is finicky and will sometimes not actually register the words you’ve told it to put on the page. Once you accidentally add a new character onto a panel and realise that there’s no way to delete it, you’ll feel triumphant when you figure out that you can just push it off your workspace, where it just sits there, off in the distance, making the web page look broken and unorganised.

There was a similar brokenness to the finalised pages the tool churned out. Often, text boxes that were arranged one way in the WYSIWYG editor would shift to new positions on the final page, usually messing up whatever mise-en-scène you were hoping to create. Ultimately, the more elements you add in, the easier it becomes for the tool to get things scrambled, so I went with a minimalist approach in my test of the tools: 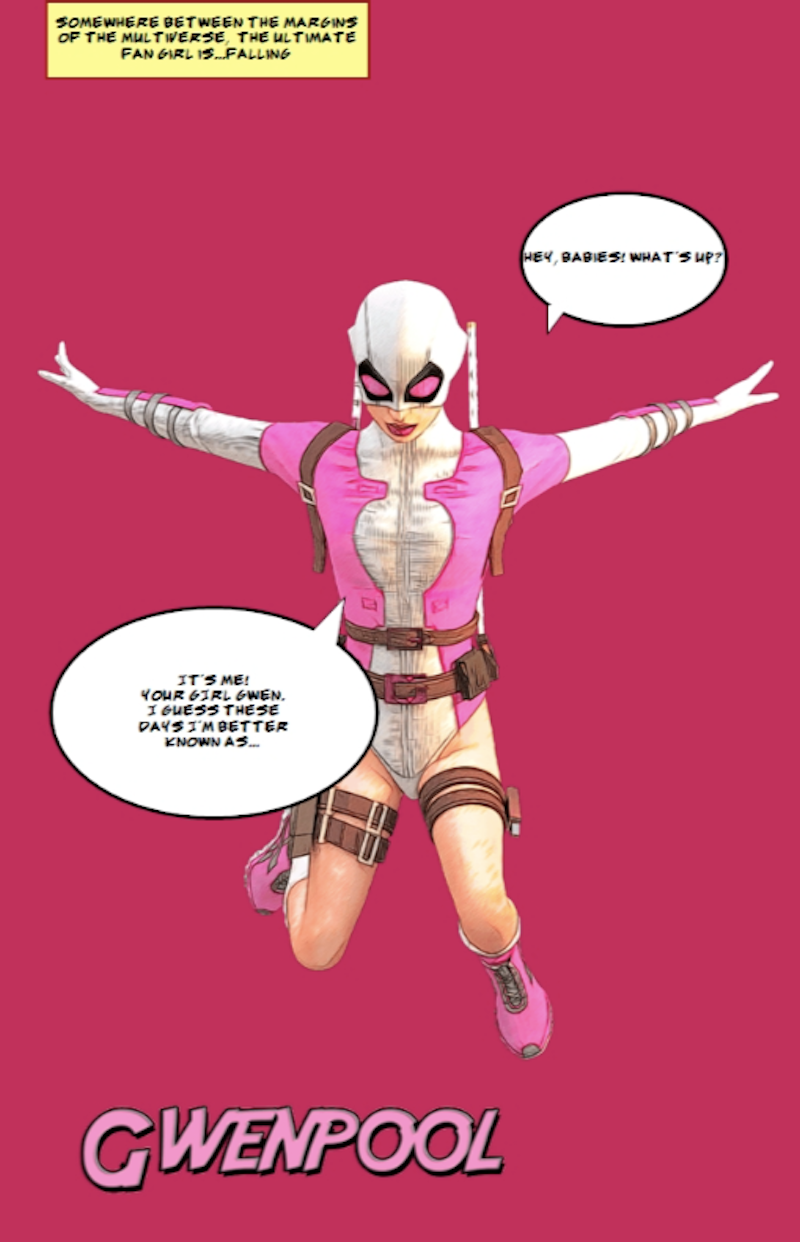 A Gwenpool comic about falling through an existential void. Image: Marvel 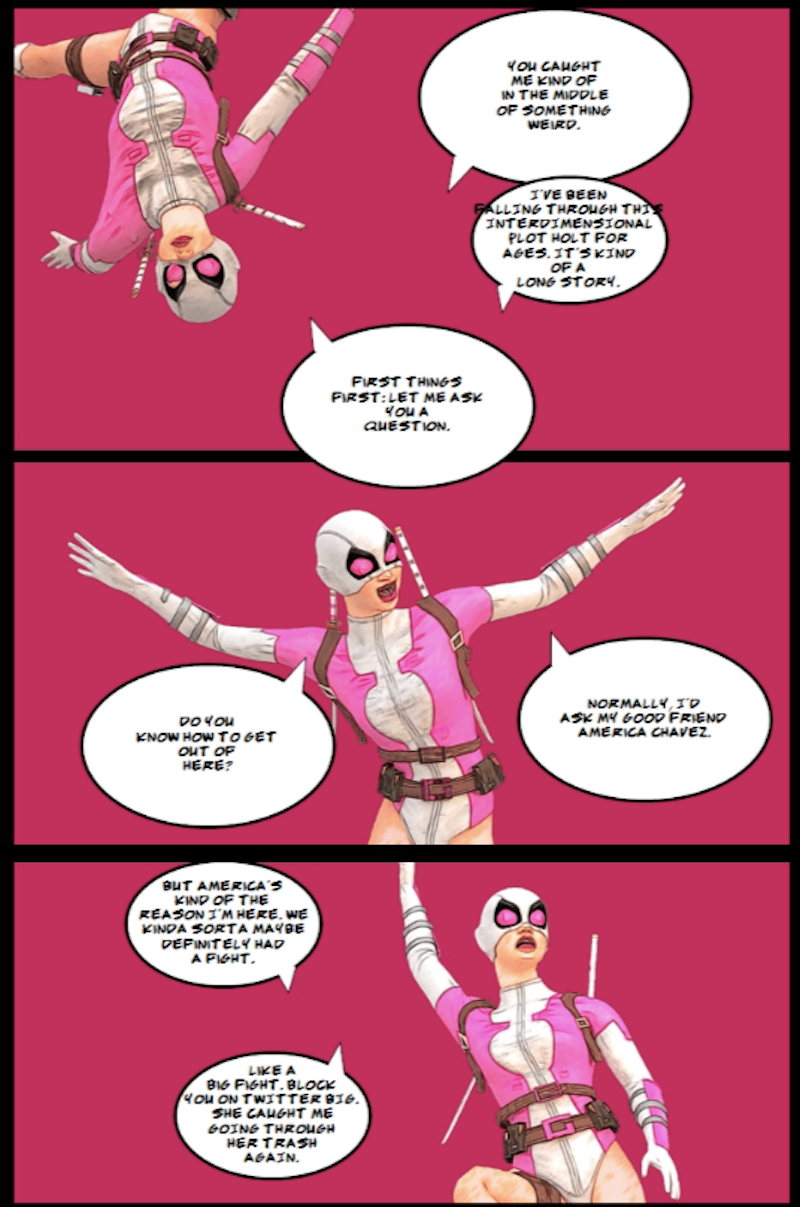 It isn’t impossible to cobble something together, but the end results leave much to be desired. Image: Marvel 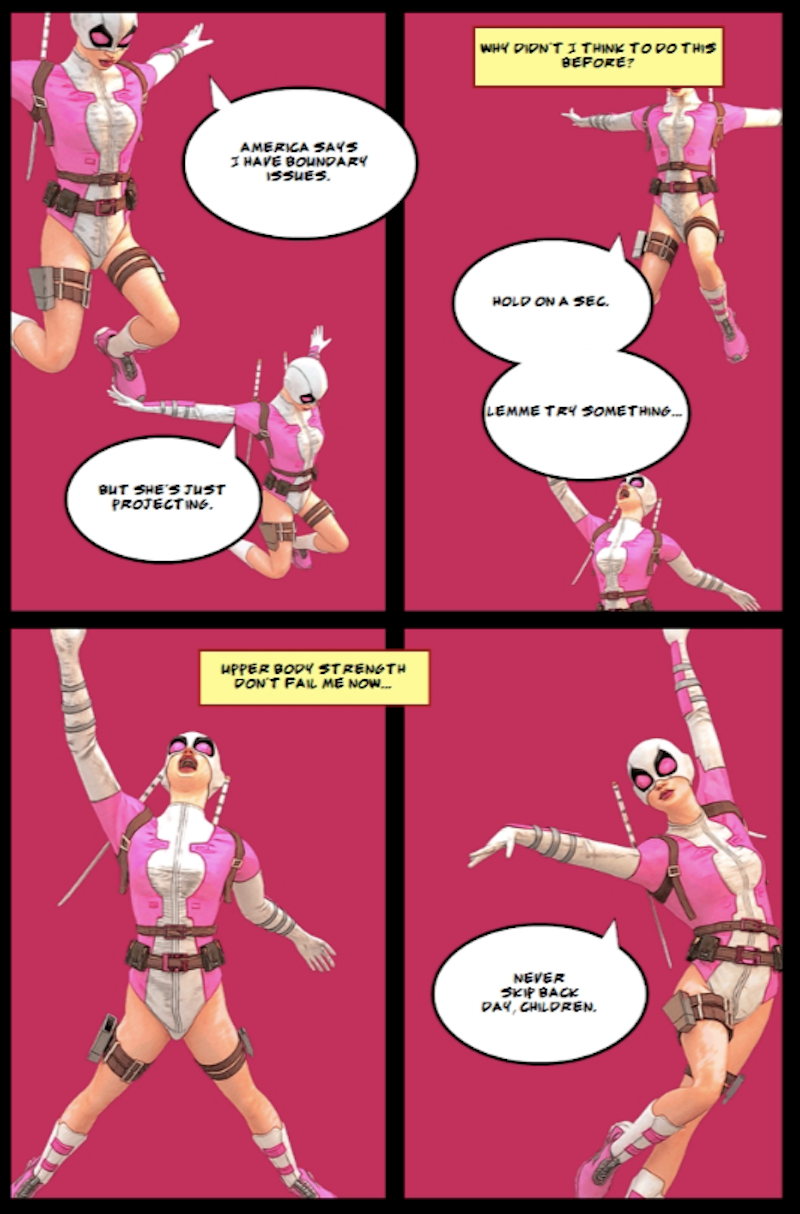 The tool certainly doesn’t make it easy to execute your vision, but it definitely forces you to get creative. Image: Marvel 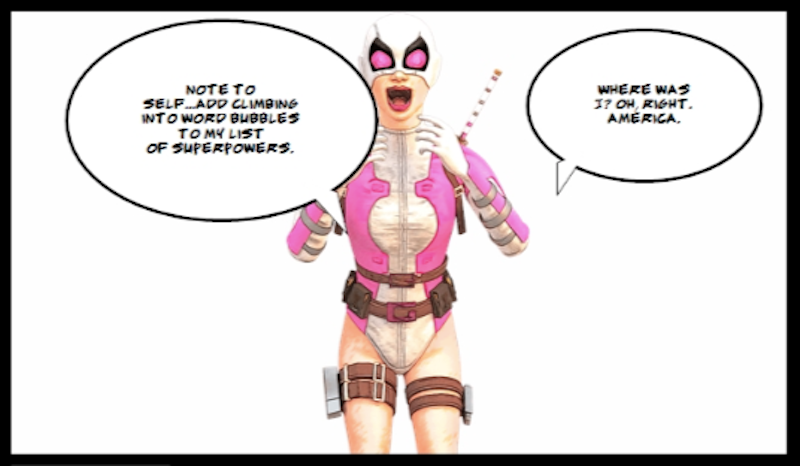 Just as the comic was coming together, Create Your Own refused to save and all of my work was lost, so I gave up. Image: Marvel

It took me more than an hour to figure out how everything in Create Your Own worked and cobble together a small story about Gwenpool, but when I attempted to save the book, the site refused and informed me that I’d set off one of the flags for using an unsupported character or phrase (a “feature” we previously had concern over). The problem was that Create Your Own doesn’t direct you to whatever the issue your book has, and so there’s no way to immediately know what has to be changed or fixed in order to publish and share your work. The user has to open up each dialog box and used the trial and error method. This may just be an issue with the tool’s current beta stage, but as far as bugs go, it’s a rather large one.

Despite all of its setbacks, though, it isn’t hard to imagine a version of Create Your Own that’s actually quite good. The current implementation of the tool is an ordeal to get through that only seems to work on desktop computers, but a polished, touch-friendly version with a bit more fine-tuning could be something phenomenal. But that would require Marvel to rebuild this thing from the ground up, and that probably isn’t happening anytime soon.