How A Virus Spreads Through An Aeroplane Cabin Travelling by plane greatly increases our chances of getting sick, or so many of us are wont to believe. To be fair, it’s not uncommon to come down with a nasty illness after we return from a vacation or business trip. But is flying the culprit? The latest research suggests the answer is no – but much of it depends on where we sit.


New research published today in Proceedings of the National Academy of Sciences suggests that airline passengers infected with influenza – a disease that spreads through the air – aren’t likely to infect other passengers who sit more than two seats to the left or right, or more than two seats in front or back. In other words, your chances of contracting the flu from an infected passenger are slim – unless you’re sitting within about three feet (one meter) of them.

Given that three billion of us fly annually, combined with the popular conception that we often contract diseases inflight, it’s surprising to learn that very few studies have looked into this issue in detail. Tracking the spread of viruses on planes, it seems, isn’t easy. Tools like video cameras, RFID tags, ultrasound, infrared, and other technologies normally used to track human movements cannot be used in an aeroplane cabin during flight for safety and privacy concerns, frustrating efforts to study transmission patterns of disease on flights.

“As far as we know, nobody had any quantitative understandings of the movements, behaviours or social contacts between individuals during flight. We also haven’t seen any studies of testing cabin air and swabs of surfaces for respiratory viruses,” Howard Weiss, Georgia Institute of Technology mathematician and co-author of the new study, told Gizmodo. 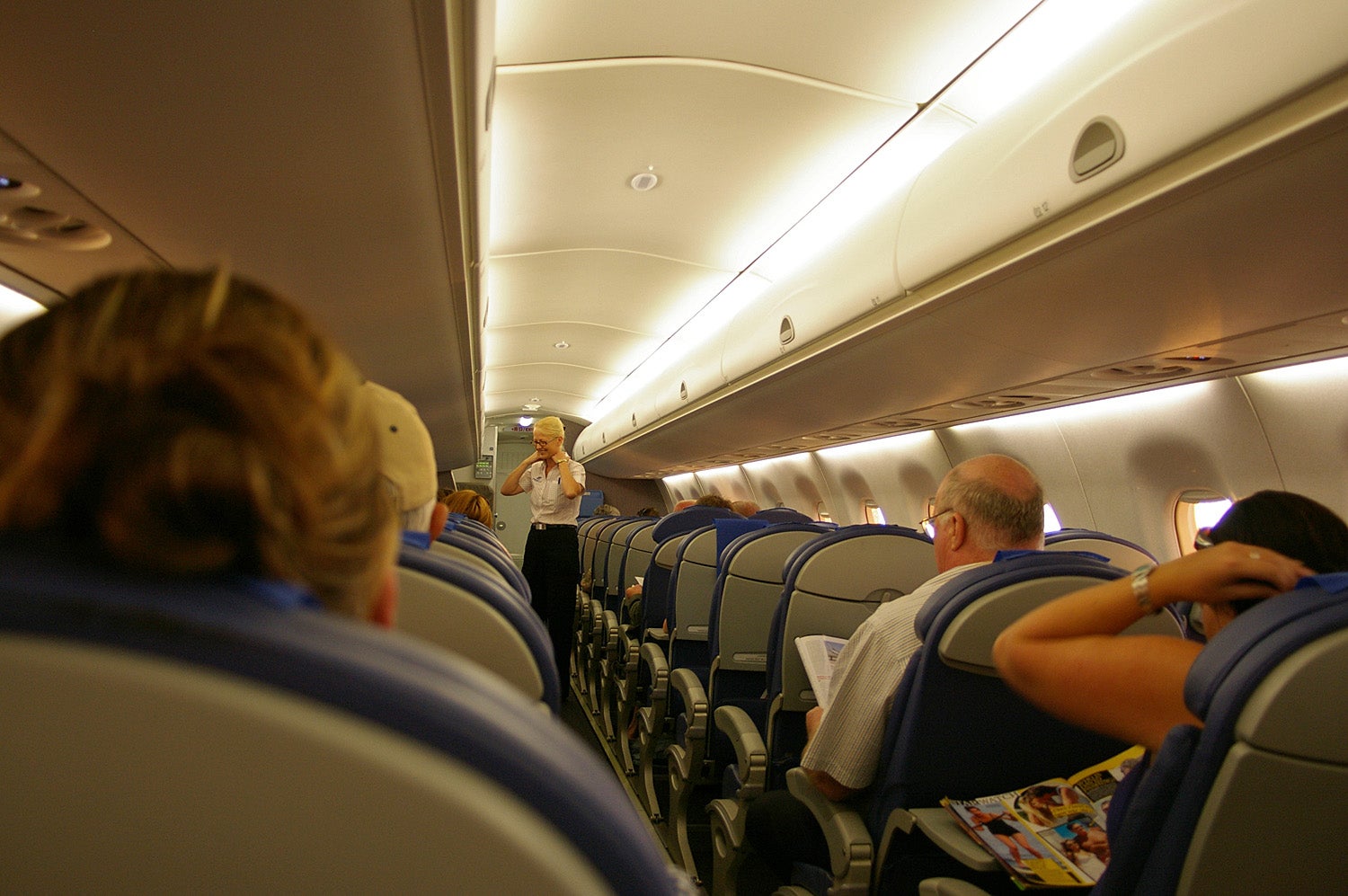 Where you sit on a plane determines how often you get up and move around, new research suggests.Photo: Bidgee/Wikimedia

To study how infectious diseases might spread during flights, Weiss, along with co-author Vicki Stover Hertzberg from the Nell Hodgson Woodruff School of Nursing at Emory University, devised and tested a new observational technique which used paired observers (members of the research team) seated every five rows, each using an iPad app, and later aggregating these local “zone-by-zone” observations to chronicle all movements of passengers and crew within an aeroplane cabin. “We are proud of the success of this method,” said Weiss.

Armed with this protocol, the research team tracked the movement patterns of passengers and crew in single-aisle aircraft over the course of 10 intercontinental flights, eight of which took to the skies during flu season. For the purposes of this study, the researchers were primarily concerned with influenza, a respiratory infection which spreads via droplets (aerosols) through the air. Using this data, Weiss and Stover Hertzberg developed a model that allowed them to determine likelihood of infection during flights; importantly, the researchers did not track the spread of the flu per se, instead using pre-established models of influenza transmission. In addition to recording the movements of passengers and crew, the team also collected air and surface samples from areas most likely to host microbes.

“This was the first study to quantify passenger movement, behaviours, and social contacts and to estimate transmission likelihood using a data-driven model,” Weiss told Gizmodo. “The simulations provide compelling evidence that for influenza, if you are not seated within a meter of an infected passenger, and you practice careful hand hygiene, then you are unlikely to get infected during flight.”

In the new study, the authors used the example of an infected person sitting in the middle of the plane. According to their computer models, passengers who sat in the row directly in front or behind, or within two seats laterally (to the left and right), had an 80 per cent or greater chance of becoming infected. But for everyone else, that number dropped all the way down to 3 per cent. As for an infectious crewmember, they have the potential to infect an average of 4.6 passengers per flight, according to the new model.

Interestingly, of the 229 environmental samples taken on the flights, not a single sample contained traces of 18 common respiratory viruses. Planes, it would seem, aren’t the cesspool of germs we often make them out to be (still, be sure to wash your hands).

The study was also interesting in what it revealed about seat designations and passenger movement, which is important because the more a passenger moves around a plane, the greater chance they have to come into contact with germs; or if they’re infected, the more chances they have to spread the germs. Approximately 40 per cent of passengers never leave their seats during transcontinental flights (which tend to be on the short side), another 40 per cent get up at least once, and 20 per cent get up two or more times. About 40 per cent of passengers who sit next to the window will get up, compared to 60 per cent in a middle seat and 80 per cent with an aisle seat. Passengers who got up did so for an average of five minutes.

So the rate of disease transmission is low, at least on short flights and on planes with a single, central aisle. But if this is the case, why do we seem to get sick so often when we travel?

“Some transmissions may have occurred while waiting in the airport, while boarding, or while deplaning,” write the authors in the study. “Alternatively, some passengers may have been infected by other sources before or after the flight. Three of the five flights in these case reports range from 9.5 to 14 [hours], providing many more opportunities for transmission.”

“This is a helpful study,” Allison McGeer, a microbiologist at Mount Sinai Hospital in Toronto, told Gizmodo. “The risk calculations, however, are based on modelling and assumptions about droplet spread, which — as the authors point out — may not be realistic.”

Fair point. No data was collected over the course of this research to show influenza or any other disease actually spreading from passenger to passenger.

“The study is a bit limited because they had no positive samples, making it difficult to know whether their transmission model accurately reflects real life,” echoed Jason Burnham, an infectious diseases expert at Washington University School of Medicine in St. Louis. “The authors [also] state that sick crew members are unlikely to come to work, but we know from the healthcare industry that this is not always true. They also state that sick crew members would likely take cough suppressants, thereby minimising disease spread. However, generally speaking cough suppressants do not work well. In addition, there was a recent study showing that just breathing can spread virus, [and that] people do not have to cough for viruses to spread,” he told Gizmodo.

Edsel Maurice Salvaña, a molecular biologist at the National Institutes of Health at the University of the Philippines Manila, said the new study is important because we need to better understand how people get sick when they fly, and if they are sick, how they transmit the virus that is causing their illness.

“The study team did a good job with mapping patient movements and going the extra step of testing for a panel of 18 respiratory viruses using highly sensitive nucleic acid testing,” Salvaña told Gizmodo. “This study was limited to flights that ran between two to five hours. It is also limited in that they were only looking at respiratory viruses such as influenza, which, despite the name, is transmitted through droplets within a one meter radius. It did not simulate more contagious viruses and bacteria like chicken pox, measles and tuberculosis which spread over bigger distances.”

All three of the outside experts we spoke to said this latest research shouldn’t affect the average person’s desire to fly on an aeroplane. As the new model suggests, and its many limitations aside, the risk of transmission appears to be low.

“However, for patients with any immunocompromising condition, aeroplane travel during cold and flu season should be taken on with caution,” said Burnham. “If they have to travel, they might want to wear a surgical mask to protect themselves. Everyone should get their influenza vaccination every year as it reduces the risk of contracting influenza, dying from influenza, and protects people who cannot get the influenza vaccination from getting the flu due to herd immunity.”

Burnham says this study should encourage people who are ill – both passengers and crew – to stay home when they are ill. In addition to wearing a surgical mask, “everyone should wash their hands,” he said. “It is one of the most effective ways to protect yourself from illness.”