As much as Black Lightning might want you to cheer for its titular hero from week to week, it can be a little frustrating watching him repeatedly come so close to figuring out one of the many mysteries he’s investigating only to miss all of the glaring signs right there in front of him. Thank goodness he isn’t the only one on the case.

In his defence, Jeff’s had a lot on his place between his duties as a hero, principal and father. But it’s been obvious that in order to maintain the balance of his life he can’t do this all alone, something he accepts and embraces in this week’s episode “The Book of Revelations”.

With the entire Pierce family (save for Jennifer) now knowing that Anissa’s a metahuman, they waste no time in accepting that she’s going to become a vigilante like her father whether they like it or not. So, like any responsible parent, Jeff makes a point of getting in some quality combat training time with his daughter to get her ready to use her powers for good in the world.

Though it isn’t the first time we’ve seen Anissa using her powers or holding her own in a fight, her sparring match with Jeff was a glimpse into what you imagine he, on some level, always wanted for his daughter. Jefferson sees so much of himself in her passion for justice and tenacious fighting spirit that had put them at odds with one another in the past. In coming to terms with the fact that her husband and daughter’s powers mean there’s no way to really keep them from fighting crime, Lynn finally lets go for the first time this entire season and has the chance to become a hero in her own right.

Despite the fact that there have been glaringly obvious clues connecting the 100, Green Light, Jefferson’s father’s research, and the presence of metahumans in Freeland for a while now, it’s Lynn who finally manages to piece the puzzle together. Free from the burden of worrying about changing something she can’t, Lynn’s realisation leads her back to Gambi and finally reveals the horrifying secret that Jeff’s confidant has been hiding.

The origins of Black Lightning‘s metahumans was always a bit of mystery because we knew of no central event such as The Flash‘s dark matter-infused particle accelerator accident. As it turns out, Black Lightning‘s superpowered people – particularly those in Freeland – are the direct result of a governmental experiment on the town’s black population that was designed to keep them docile. The 100, Green Light – all of it ties back to that original testing that killed some, while it left others, such as Jefferson, with abilities.

All it took was for someone to slow down, think things through, and follow up on their leads in order to figure out Gambi’s secret, and it really makes you think to yourself that Jefferson really shouldn’t be doing this superhero thing alone. Together, Jeff and Anissa make a formidable team, not in the least part because Anissa’s a quick study.

Unlike her father, who’s seemingly only just now beginning to learn how to use his powers in a variety of new and clever ways, Anissa deduces that the strength she gains from becoming super-durable can be used in both blunt and precise ways. Thunder is fast-tracking her way to becoming Freeland’s newest (and potentially most effective) costumed hero, and what’s great is that Jefferson is totally cool with it. There isn’t any jealousy or competition or feelings of overprotectiveness – he’s just jazzed as hell that his daughter takes after him in the superpowers department. That’s also true of Jennifer, Jeff’s youngest, who finally begins to manifest powers of her own – electrical outbursts that she can’t control.

As optimistic a tone as “The Book of Revelations” might strike for the Pierce family, if there’s one thing Black Lightning‘s a big fan of doing, it’s making hard pivots that cast its characters in entirely different lights than you were expecting.

The introduction of Jennifer’s powers just as Anissa and Jeff bond over theirs might make you assume that the three will be hitting the streets in costume as a happy go lucky trio. But it’s much more likely that Freeland’s newest metahuman might throw a wrench into things. 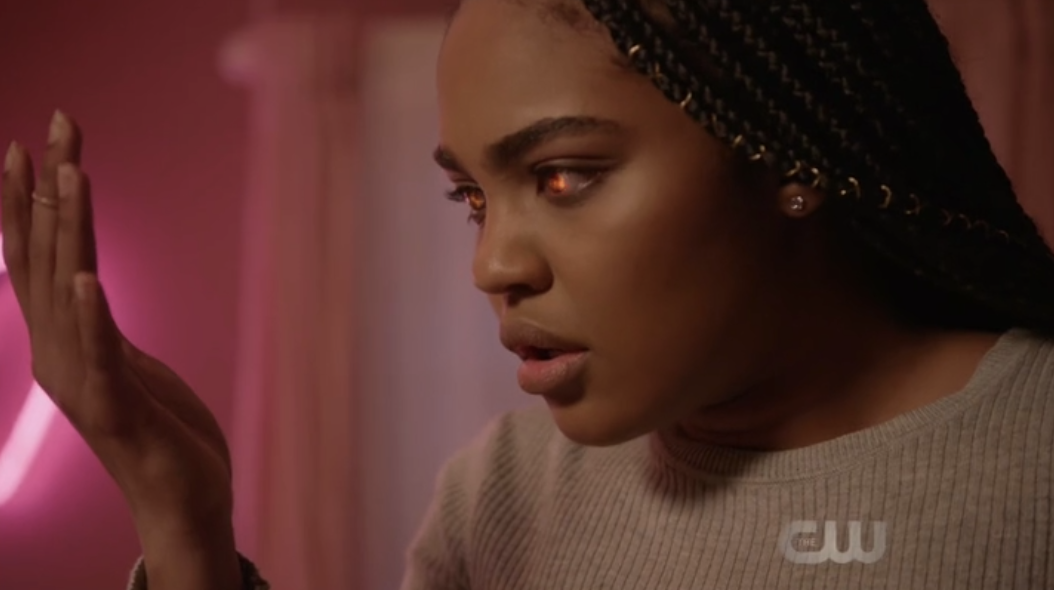