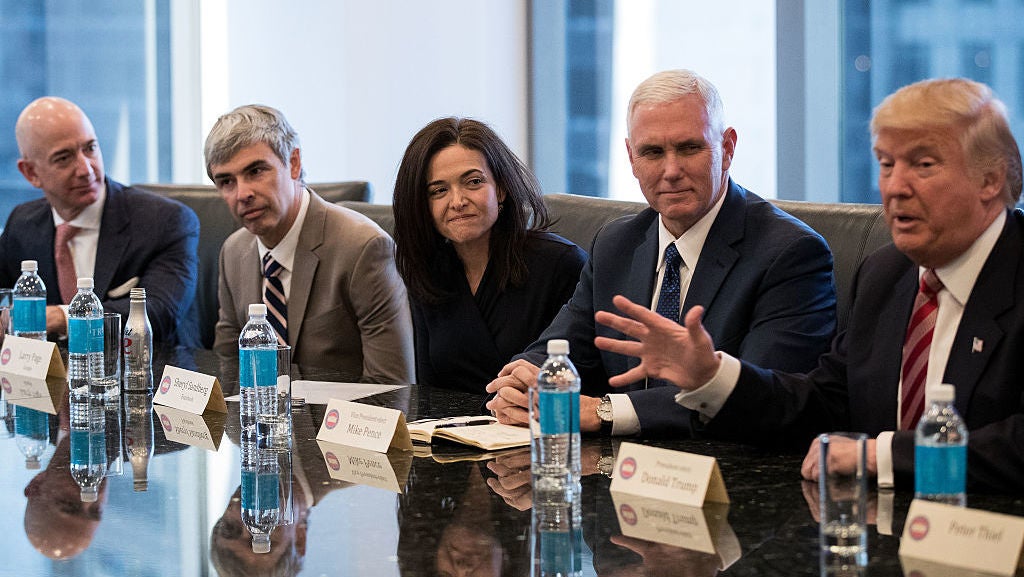 Excerpts from an insider account of Trump’s bumbling first year in office are making big news on. Among the nuggets of new information, a source recounts the aftermath of the president-elect’s first sit-down with tech CEOs at Trump Tower. At the time, it seemed that Trump was rubbing his new power in the faces of the elite, but it appears that the CEOs were really manipulating Trump.


Michael Wolff, a journalist who’s built his career mostly covering the media, has enjoyed rare access to the Trump White House for the last year. Wolff angled for his seat at the table long before election day with multiple puff pieces about Trump. And he was rewarded with the chance to act as a fly-on-the-wall in the White House earlier this year. That time — along with 200 subsequent interviews with members of the Trump orbit — has resulted in a forthcoming book called Fire and Fury: Inside the Trump White House. Selections from the book started trickling out today, and the president isn’t happy.

New York magazine’s Daily Intelligencer blog ran a long excerpt from the book on Wednesday. After establishing that no one on the campaign expected to win, and few thought that Trump should actually be the president, Wolff says that the Donald started to get used to the idea, enjoying being courted by people who needed a favour.

In December of 2016, the president-elect called the leaders of America’s biggest tech companies (including Tim Cook, Jeff Bezos and Larry Page) to Trump Tower. At the time, it appeared that Trump was sticking it to the CEOs, many of whom had expressed opposition to his candidacy during the election. We called it an exercise in humiliation. Quartz called it a “naked power play” that Silicon Valley lost. And indeed, tech CEOs have paid a small reputational price for their proximity to the president. But according to Wolff, it didn’t really play that way for Trump. From Daily Intelligencer:

Later that afternoon, according to a source privy to details of the conversation, Trump called Rupert Murdoch, who asked him how the meeting had gone.

“Oh, great, just great,” said Trump. “These guys really need my help. Obama was not very favourable to them, too much regulation. This is really an opportunity for me to help them.”

“Donald,” said Murdoch, “for eight years these guys had Obama in their pocket. They practically ran the administration. They don’t need your help.”

Murdoch suggested that taking a liberal approach to H-1B visas, which open America’s doors to select immigrants, might be hard to square with his promises to build a wall and close the borders. But Trump seemed unconcerned, assuring Murdoch, “We’ll figure it out.”

“What a fucking idiot,” said Murdoch, shrugging, as he got off the phone.

We should note that Wolff is known for spinning vivid yarns from the tiniest bits of information, and those around Trump are known for lying to the press. But Wolff should have some decent Murdoch sources considering he wrote a biography of the Fox News founder in 2008. And as Wolff notes, everyone around Trump blabs to the media because no one really likes him. The Guardian ran quotes from the book today in which Steve Bannon characterised Donald Trump Jr, Jared Kushner, and Paul Manafort’s campaign meeting with Russians as “treasonous.” He also implied that they’re all going to get burned with money laundering charges. If these quotes are inaccurate, Bannon could easily correct the record on the site he runs, Breitbart News. But thus far, Breitbart is simply reposting the stories about treason and money laundering straight, with no comment from Bannon himself.

Taking ping-ponging positions on the business of tech has been Trump’s modus operandi for years. Back in 2014, when Trump was still building his racist base with conspiracy theories, he tweeted these inspirational words from Amazon CEO Jeff Bezos: “If you never want to be criticised, for goodness’ sake don’t do anything new.” It’s funny because Bezos means that people should, you know, follow their dreams; Trump means everyone but him is wrong. But Bezos would soon be a foil for Trump’s billionaire-populist rhetoric.

In 2015, he called Amazon a big tax shelter. On the campaign trail he said of Bezos: “He owns Amazon. He wants political influence so Amazon will benefit from it. That’s not right. And believe me, if I become president, oh, do they have problems. They’re going to have such problems.” Bezos hasn’t been particularly vocal about criticising Trump personally, but he has offered the president a trip on his rocket to Mars.

Throughout the campaign, he ragged on Silicon Valley as a whole, much like he ragged on Wall Street greed. In May of 2016, he warned that another tech bubble was coming and it was being fuelled by unprofitable startups with no clear path to being a viable business. “I’m talking about companies that have never made any money, that have a bad concept and that are valued at billions of dollars, so here we go again,” he told Reuters. Still comfortable that Trump’s campaign was a sideshow, outspoken tech leaders mocked his comments. “FINALLY someone calls it out,” venture capitalist Marc Andreessen tweeted, as “Make Bubbles Great Again” started trending. It was easy to see that Trump didn’t mean much of anything he said. He’s a rich guy targeting rich guys to get applause. He said was going to drain the swamp and punish Wall Street, then he filled his cabinet with veterans of Goldman Sachs and let them make all of the monetary policy.

CEOs like Tim Cook and Elon Musk have been clear that they only wanted to work with Trump so that they could manipulate him into doing the right thing. Still, those associations have caused direct problems for Uber, Oracle, Facebook, and Twitter. H-1B visas are still in legislative peril and when Trump met with many of the same tech CEOs again in June for a roundtable discussion with his American Technology Council, it seemed like everyone’s demeanour was just a little bit grimmer.

But Trump has hung back on criticising the tech world — aside from the occasional broadside aimed at Amazon whenever he doesn’t like a story from the Bezos-owned Washington Post. Meanwhile, conservative figures like Ted Cruz and Marsha Blackburn have picked up the torch from the neo-Nazis of Twitter and begun to accuse social media companies of violating American’s right to the freedom of speech. And the same tactic was used by FCC chairman Ajit Pai as a distraction during his push to kill net neutrality.

Maybe the Trump Tower summit wasn’t about humiliation. Still, outside of one major factor, Trump hasn’t exactly made these CEOs’ lives easier. But that one factor is huge. It seems that the December tax bill should treat everyone at the table quite well. Companies like Apple can finally repatriate the hundreds of billions in cash that they stashed away offshore because now they won’t have to give Uncle Sam very much of it. Well-paid tech workers are likely to see major cuts to their end-of-the-year IRS bill. And as The New York Times points out, the rate on future foreign profits should give pseudo-monopolies like Google a leg-up over smaller startups that are trying to edge into the market and reap most of their profits domestically.

It’s altogether clear that in this war of egos, we’re the losers. Tech bosses get their money, Trump feels like a big boy, and all we have are some stories to tell and a chance to take a good hard look in the mirror while our pockets are picked by the powerful.