10 Speedruns That Take Over 9 Hours To Finish 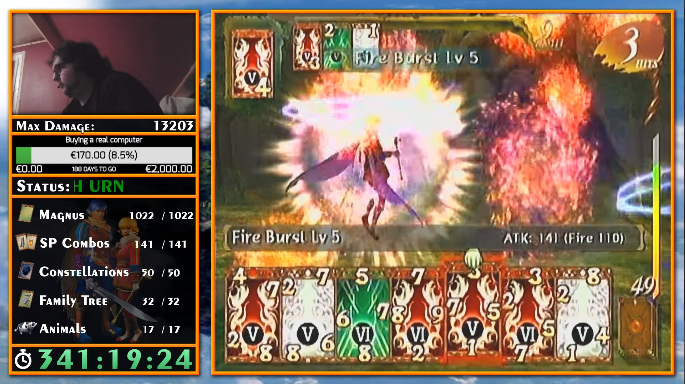 Speedrunners want to complete games or meet special conditions as fast as possible but some games are so massive that it can take days to get through them, even if you’re playing as quickly as possible.

After I reported on Undertale’s absurd, 33 hour long “True 100%” speedrun, my coworkers and readers were curious about what some of the longest speedruns are. These ten speedruns are some of the most gruelling imaginable, lasting dozens of hours or even days to complete. Others bring normally fast games down to a snail’s pace.

Sonic Adventure 2: Battle‘s 180 Emblems category has the dubious distinction of turning the world’s fastest hedgehog into a slowpoke. Emblems are awards granted to the player for completing story missions and side activities. Speedruns focusing on story missions usually last around an hour and a half.

What makes 180 Emblems such a drag is the addition of side activities involving Chao, adorable little monsters that players can raise to run races and fight karate matches. Chao ranching takes up a significant portion of the run, with a full hour dedicated to improving a Chao’s stats by feeding them fruit and giving them animal pals to play with.

One hundred per cent speedruns require a player to collect everything that can be found in a game. For Super Mario Odyssey, this means finding 999 power moons and 40 different costumes, possessing 52 enemies and collecting 1000 purple coins. It’s a tricky process to map out and track so many items, but the really long part comes at the end of the run, when runners spend four hours grinding gold coins to buy items.

The run has a few spots where runners can take breaks, including a stretch of cutscenes at the end of the game’s story that one runner said he uses to go to the restroom… while keeping the controller in his free hand to scroll through the cutscenes’ text boxes.

Much of the run is spent preparing for this fight, which comes nearly twenty hours into the run. With the right equipment and stats, characters can break the game’s damage limit and attack for tens of thousands of damage points. It makes the fight much easier even as one wrong move or unlucky attack can potentially lead to disaster, wasting 20+ hours of the runner’s.

There are 689 cards required to complete this category and defeat every opponent which means grinding through hours and hours of battles. While there is a way to duplicate certain cards, it isn’t allowed in the category’s new rules. The end result is a run that lasts nearly four days in real time. Runners don’t aim for the best ranking but simply try to complete fights as quickly as possible and take breaks about every ten hours.

The Legend of Zelda: Breath of the Wild 100%

Breath of the Wild’s massive scale turns the hunt for every collectable into an excruciatingly long adventure.

Runners need to find 900 Korok seeds hidden throughout the game world and complete every puzzle-filled shrine. While there are tricks and skips to move through shrines faster, the sheer number of shrines to complete make learning every strategy difficult. These runs feel less like a massive string of wild tricks and more like an extended wilderness expedition.


Desert Bus is a minigame found in the unreleased Sega CD game Penn &amp; Teller’s Smoke and Mirrors that tasks players with driving, in real time, eight hours from Tucson, Arizona to Las Vegas, Nevada. Every time the trip is completed, players receive one point. Players need to keep a consistent speed and avoid driving off the road.

There is a notable gimmick category called High Score that no one can really complete, since it involves getting 99 points in total. Alden S. created a tool-assisted run instead, using game-editing software to create a continuous 41 day run that no human could possibly perform.


The Final Fantasy IX insanity run lives up to its somewhat unfortunate name. It doesn’t allow any extended breaks for sleeping, although food is fine. This run’s requirements are huge and involve mastering all abilities, delivering every piece of Mognet mail and obtaining one of every card in the game’s addictive Tetra Master card game.

Insanity% isn’t a real, competitive category but occasionally rears its head when runners want to participate in an extended race.

This category requires the player to fully upgrade their house, get every golden tool, and complete the museum. Players are allowed to adjust the in-game clock, travel between towns, and use gltiches to duplicate items or head out of bounds. Even with those additional advantages, becoming the best damn villager ever means one day of focused speedrunning. Thanks, Tom Nook.

This is the big one and probably the best-known “longest speedrun.” Baten Kaitos: Eternal Wings and the Lost Ocean is a card game with a ton of stuff to collect, and this run requires the player to get all of it.

One of the largest complications to the run is the fact that certain items upgrade in real time. One item, a bottle of shampoo, takes 336 hours to upgrade. The run takes so long that Twitch temporarily suspended the world record holder’s channel for a terms of service violation when he took time to sleep on stream.