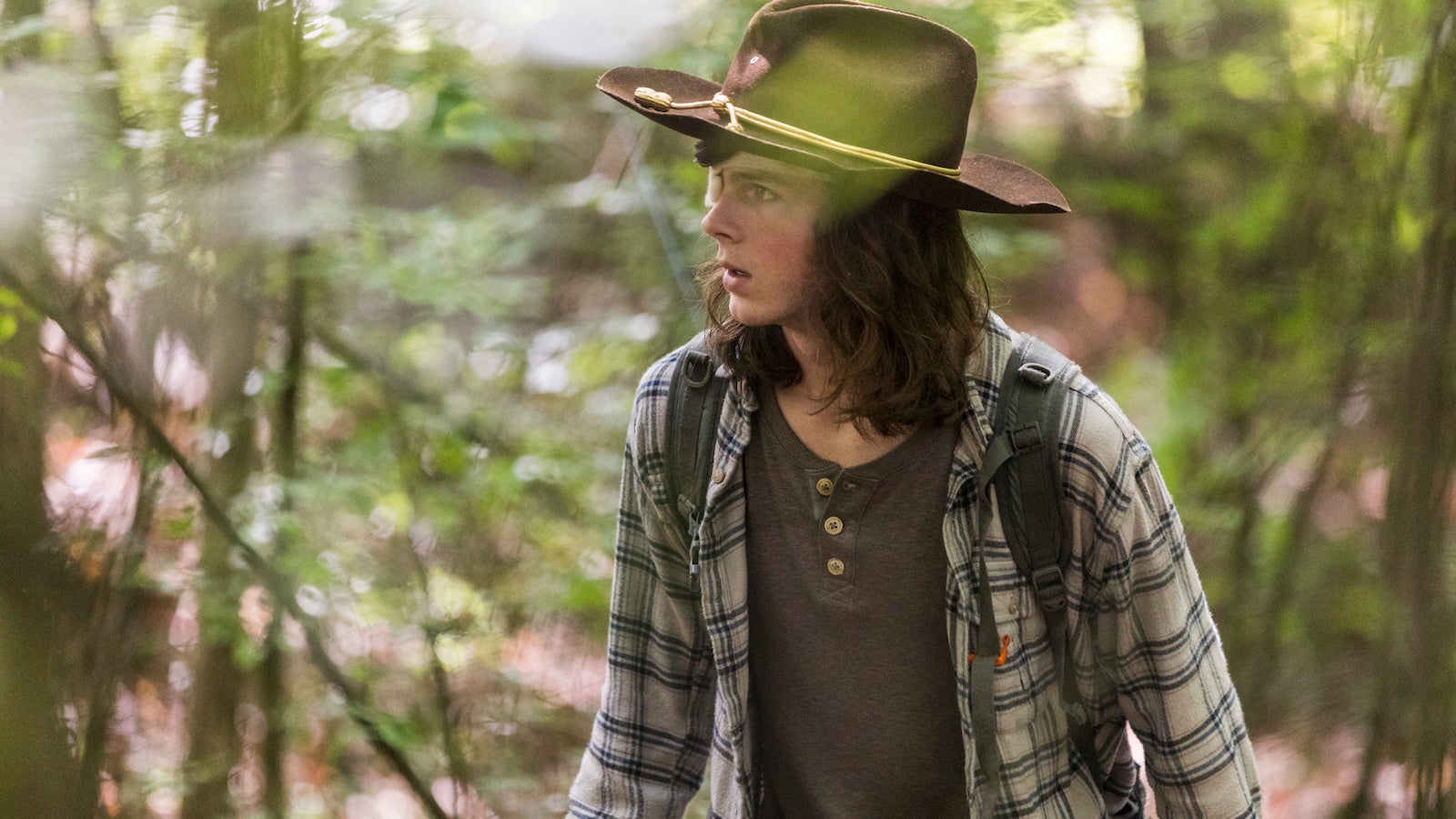 After five episodes detailing the three-pronged attack on the Saviors’ headquarters, several outposts, and a great deal of post-op clean-up, it makes perfect sense that the show would finally see what the hell everyone else is up to. Unfortunately, it means this week’s episode was a bit of a letdown from its recent hot streak, but as a lead-in to the half-season’s “third act” it serves its purpose well. Also: Rick seems to be an imbecile again.

“The King, the Widow, and Rick” could easily have been titled, “The King, the Widow, Rick, Michonne, Rosita, Daryl, Tara, Maggie, Jesus, Gregory, all those Savior prisoners, Carol, that little kid who lost his brother, Aaron, Enid very briefly, that weird performance art group that lives in a garbage dump and betrayed Alexandria, and also the Fat Lady”, because pretty much everyone gets their own little story, which vary in both interest level and in whether the characters involved are being dumbarses. They’re almost all completely separate from each other, so I’m just going to tackle them individually:

Maggie, Jesus, Gregory and the Saviors

If there was an A-plot this week, it was Maggie trying to decide what to do with the prisoners Jesus brought to Hilltop’s front door a few episodes ago. As Gregory makes another hilarious, completely obtuse speech about not letting people you can’t trust inside the walls, Jesus guards the captured Saviors outside, feeding them turnips (which seemed like they were going to rot soon, but Maggie is upset by anyway). During the night, Jesus hears construction going on inside Hilltop; he worries it’s a gallows, but it turns out to be a hastily built prison of barbed wire. Maggie chucks Gregory in there too, for good measure, which Gregory takes exactly as well as you’d think. 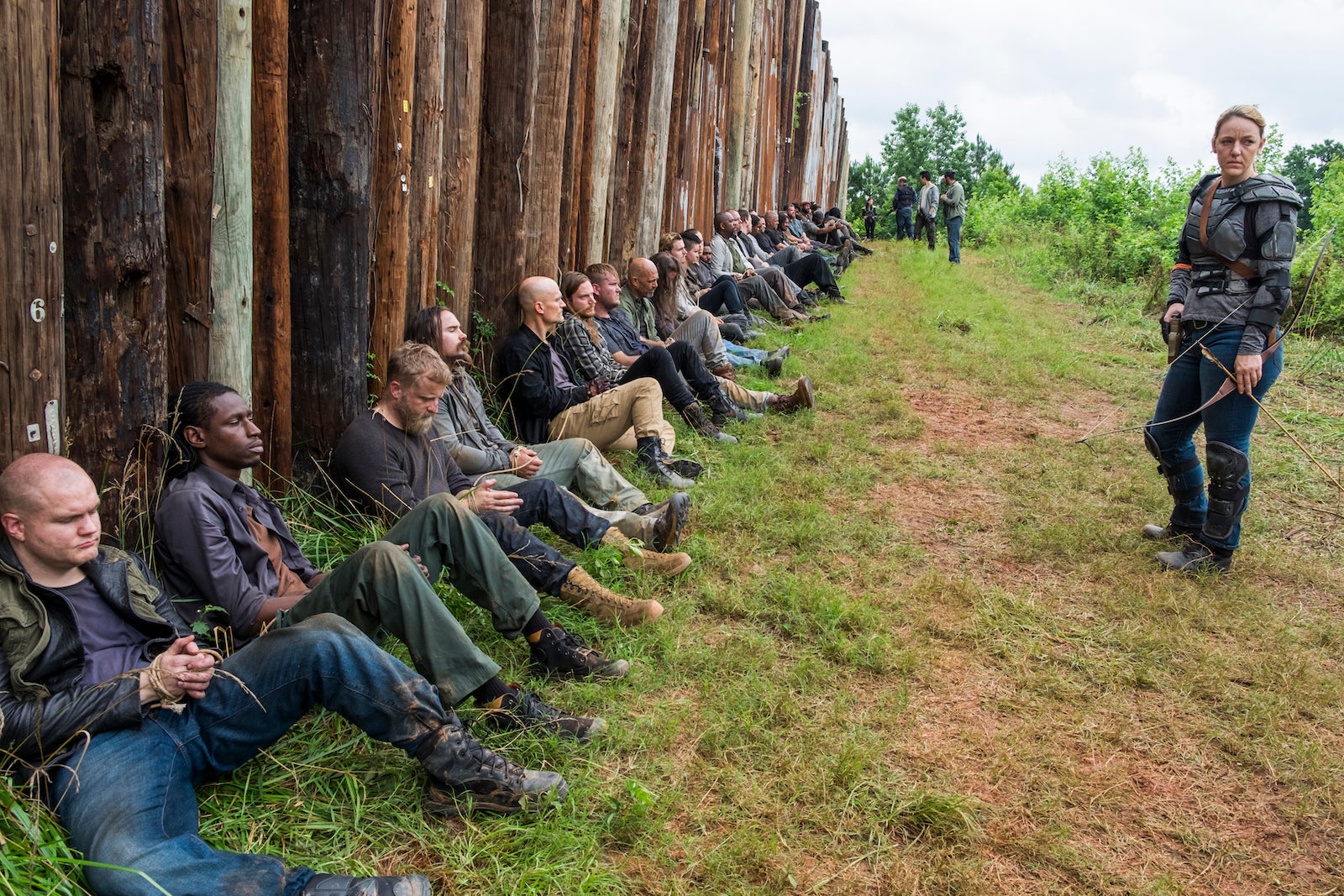 The dilemma at the heart of this storyline is still the same. Should people show mercy to their enemies because they’re better than the Saviors (or at least want to be better), or should they murder their helpless prisoners to erase even the possibility of future threats from them? TWD presents evidence for both sides of the argument with two Saviors; the first is the longhaired arsehole from the Kingdom contingent, Jared, who shot young Benjamin in the infamous “Cantaloupe” episode; the second is a new guy, named Dillon, who says he was sent to the compound to build a wall. He doesn’t pretend he’s utterly innocent, but he’s also grateful that Jesus showed him mercy. When Jared/Arsehole starts trying to surreptitiously cut through his ropes with a rock, Dillon knocks it out of his hands, telling him to not make the Hilltoppers regret their decision not to outright execute all of them.

Given that we now know at least one Saviour is a half-decent dude, it certainly feels like the show wants us to side with Jesus, because clearly some of these Saviors want the opportunity to be better people – and maybe have wanted it for a long time, but Negan’s system of exploitation made it impossible for them. But at the end of the episode, Maggie explains to Jesus she didn’t have the cage built out of mercy; she did it to keep them in case they need to have a prisoner trade later. If they end up not being needed, she’s going to kill them.

Meanwhile, Michonne is still a character that is on this show! After a very brief check in during the season premiere, I believe, Michonne and Rosita – both still injured after the last season finale – decide that, having helped plan the attack, they have to go see Sanctuary for themselves. On the way, they heard a choir singing which leads them to a secret Sanctuary weapons cache.

There’s a gunfight, Rosita shoots a man with a rocket launcher (yes, really), and we learn what “the Fat Lady” is – it’s a truck overloaded with speakers, playing that choir music, which the Saviors could use to lead the zombies away from Sanctuary. Unfortunately, Michonne, Rosita and Rosita’s rocket launcher aren’t enough to stop one of the Saviors from driving away on the truck…

…which is why it’s just so darned fortuitous that Daryl and Tara show up on a garbage truck they got somewhere and drive right into the Fat Lady, destroying it. Daryl and Tara tells Michonne and Rosita that they’re going to end “it” right now, which, as per Daryl’s previous conversation and fight with Rick, presumably means he’s going to blow a giant hole into the Sanctuary compound wall and let the zombies eat everyone inside, Saviors and indentured workers alike. We’ll see if Michonne or Rosita are actually down with this idea later.

Oh, Daryl and Tara also want to kill Dwight ASAP, even though he’s been incredibly useful in the fight against the Saviors. So that’s great.

Carl is also a character who is also on this show! Last seen leaving food for the guy Rick chased off in the season premiere, Carl has tracked him down. His name’s Siddiq, and he seems like a genuinely good person who has spent his time laying traps for zombies so he can kill them and free their souls, as per his parents’ wishes. Carl gives him more food and water and invites him back to Alexandria – 100 per cent not according to his parent’s wish, as he bemusedly points out.

This is a direct continuation of Ezekiel’s no good, very bad day; he refuses to come out of his home, let alone resume his role as king. Carol says all the obvious stuff that “Some Guy” left implicit – Ezekiel owes it to his people to lead them, that the people need him to lead them, and if even if Ezekiel feels like a fraud he needs to play the part for the benefit of the people. Ezekiel still can’t bring himself to do it, though. I am totally fine with Ezekiel needing more time to process his failure, but I hope he shapes up by his next appearance, because I’m still full of leaders wallowing in grief after Rick spent most of last season doing the same. 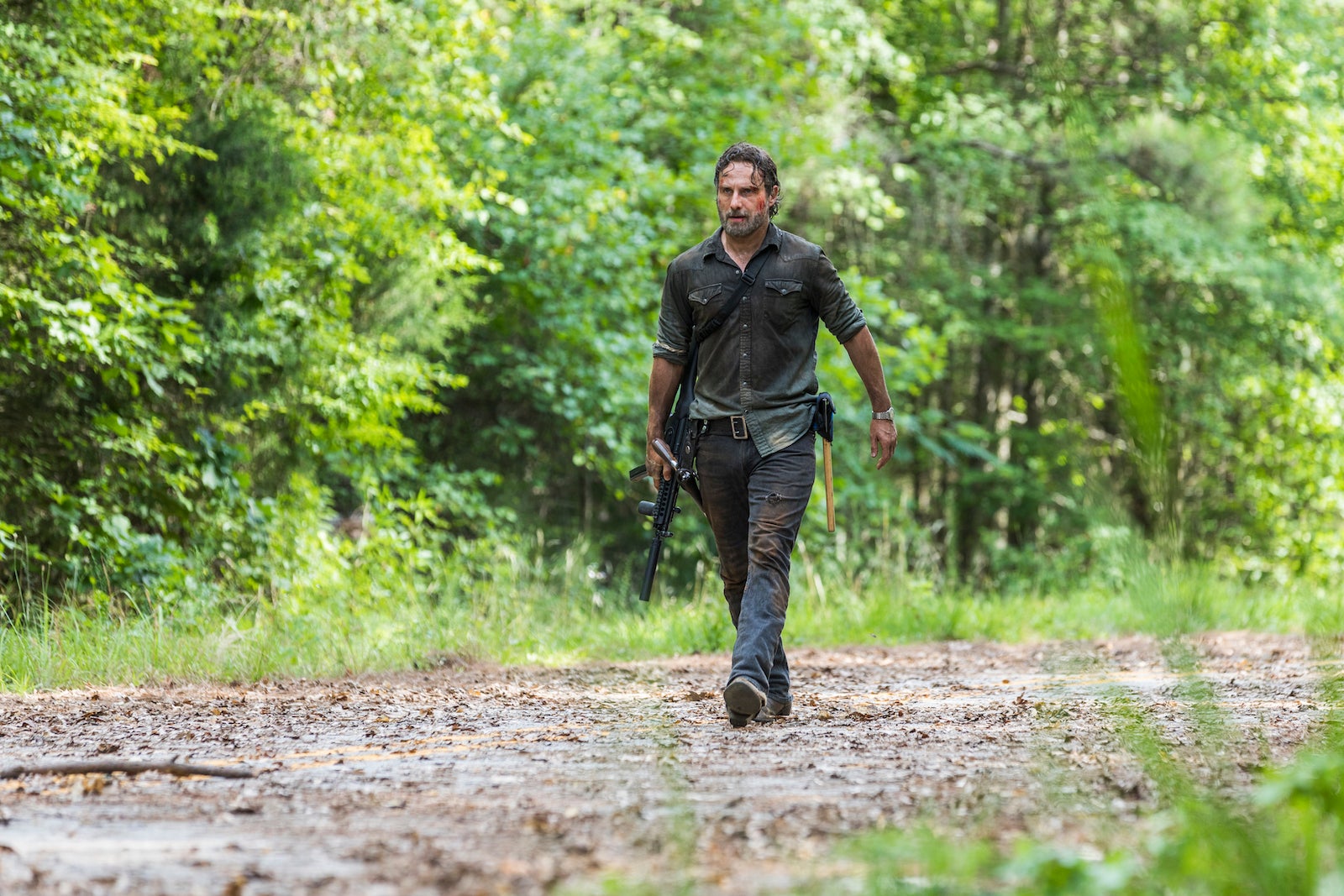 And, finally, the Big Dumb-Dumb of the Day Award goes to Rick, who decides to visit the Garbage People (AKA the Scavengers) and offers them a chance to team up again. You know, after they betrayed him after he made the exact same deal with them last season, after which they killed many of his people. Sigh.

Rick says that if he doesn’t get home, his people know where he is and they will come for him guns blazing, but literally no one else in the episode mentions this or indicates they have any clue they know where he is or what he’s doing. At any rate, Garbage Lady says no and locks him up.

I hope – I hope – this is part of some plan because, if not, it is a teeth-achingly stupid decision on Rick’s part. I mean, even if the Garbage People had said yes, he couldn’t have possibly trusted them, so what’s the point? I will say, however, that if Rick is fine offering amnesty to the Garbage People, he should basically never fail to offer anyone a second chance ever again.

All in all, this was a filler episode, a chance for the characters and the audiences to catch their breath. But in the pantheon of (the many) Walking Dead filler episodes, this has enough going on that there’s still going to be some energy heading into next week. It’s still been one of the show’s better half-seasons in recent memory, so here’s hoping TWD manages to stick the landing. 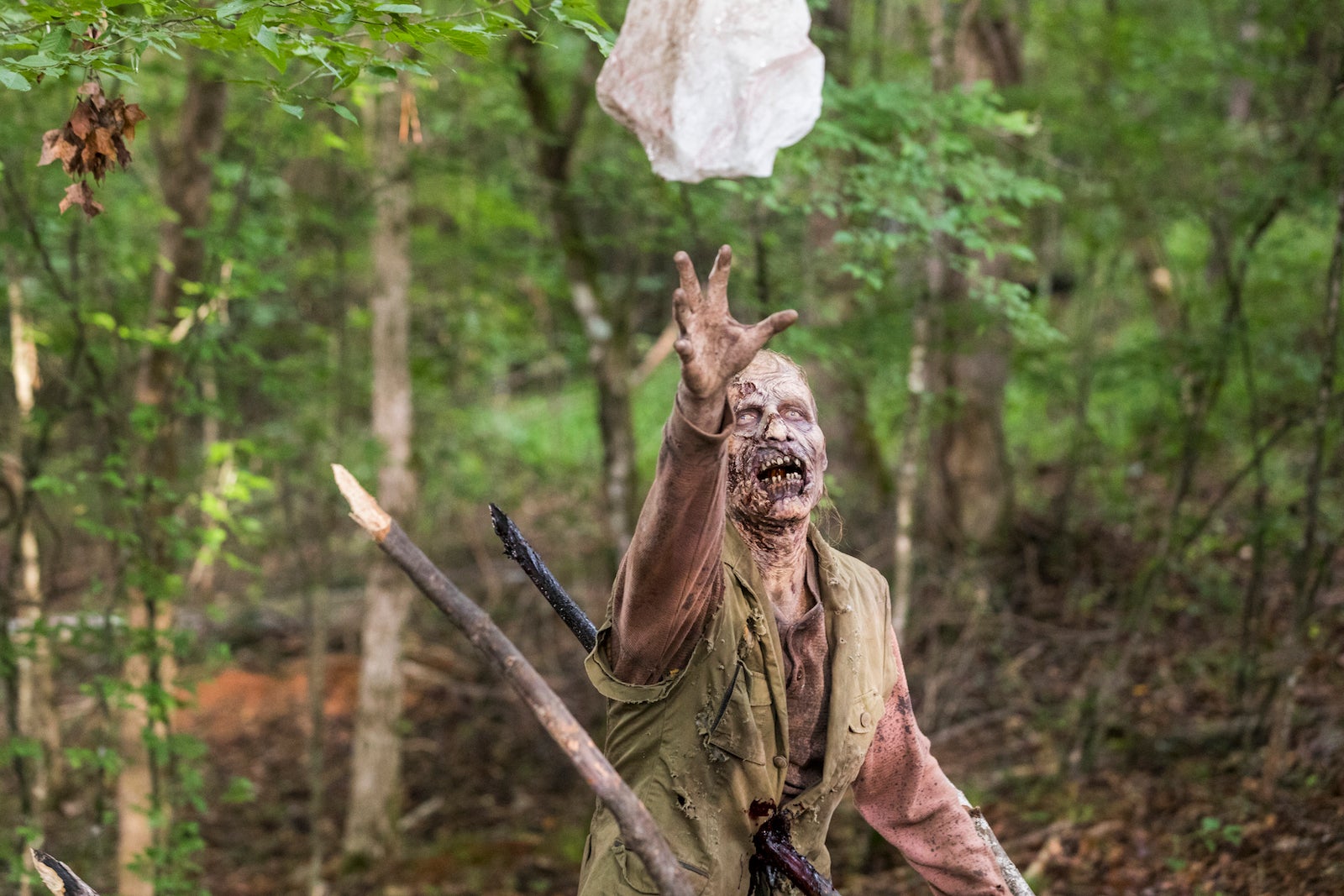