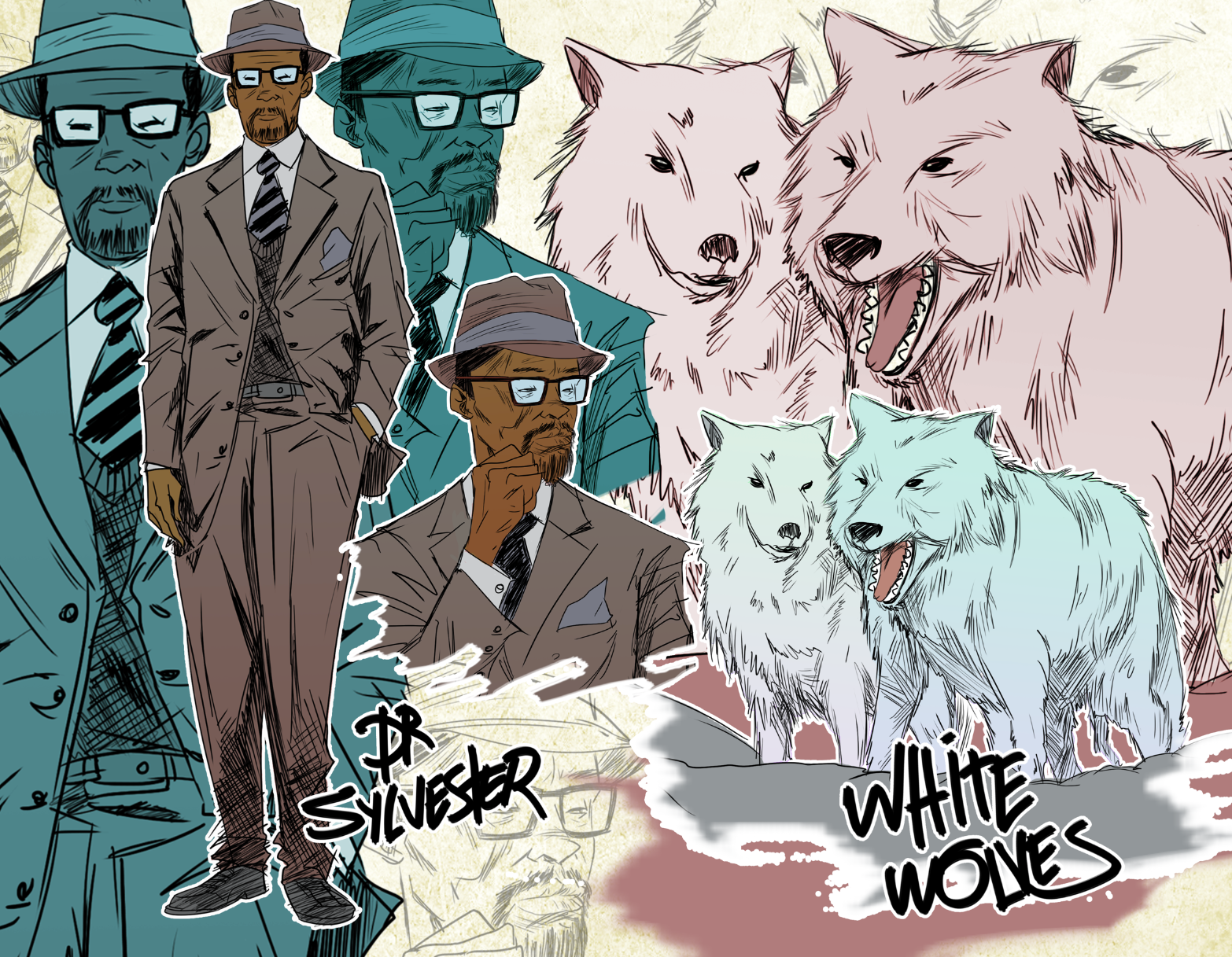 Some concepts just grab you right away. Take this one: a family of demonologists operating during the Harlem Renaissance, with a creative team that includes the writer and artist from Marvel’s late, well-loved Power Man and Iron Fist series. You want to know more, right?

Announced a few weeks ago at Rose City Comic Con, Bitter Root comes from the combined talents of artist Sanford Greene and co-writers Chuck M. Brown and David Walker. Walker and Greene worked together on Power Man and Iron Fist, while Brown’s created Rotten Apple for Dark Horse and written for Marvel, MTVGeek, and Spike. I had the chance to speak with the three gentlemen right before New York Comic Con about Bitter Root, balancing genre lore with real-world history, and why it’s personally important for them to create and see black heroes in today’s comics medium.

An edited and condensed transcript of our conversation follows.

On The Genesis Of The Basic Concept

David Walker: It was really Chuck. Chuck went to Sanford; they were working on it for a while and were like, “we don’t wanna work that hard.” They called me in because they know I’m a workaholic. Sanford and I saw the writing on the wall in terms of what was happening with Power Man and Iron Fist, were getting along really well, and wanted to do something. He and Chuck had this project and were kind enough to bring me on board.

Sanford Greene: [Chuck and I] originally were thinking about this idea and the chemistry that I had with David on Power Man and Iron Fist, I felt like we could benefit from that with this creator-owned series.

Chuck Brown: It was barbershop talk, actually [that sparked the idea]. One barber mentioned that barbers used to set bones, pull teeth, and stitch up people. I was like wow, probably a lot of blood and rags and stuff around… that would be a great cover for demon hunters. Hanging out with Sanford one night, I was like, “Harlem Renaissance. Demon hunters who also heal…” [Sanford] was like “What?!” A couple of weeks later, there were character designs in my email. From there, it kind of just snowballed.

On The Sangerye Family, The Main Characters Of The Book Who Hunt And Purify Demons 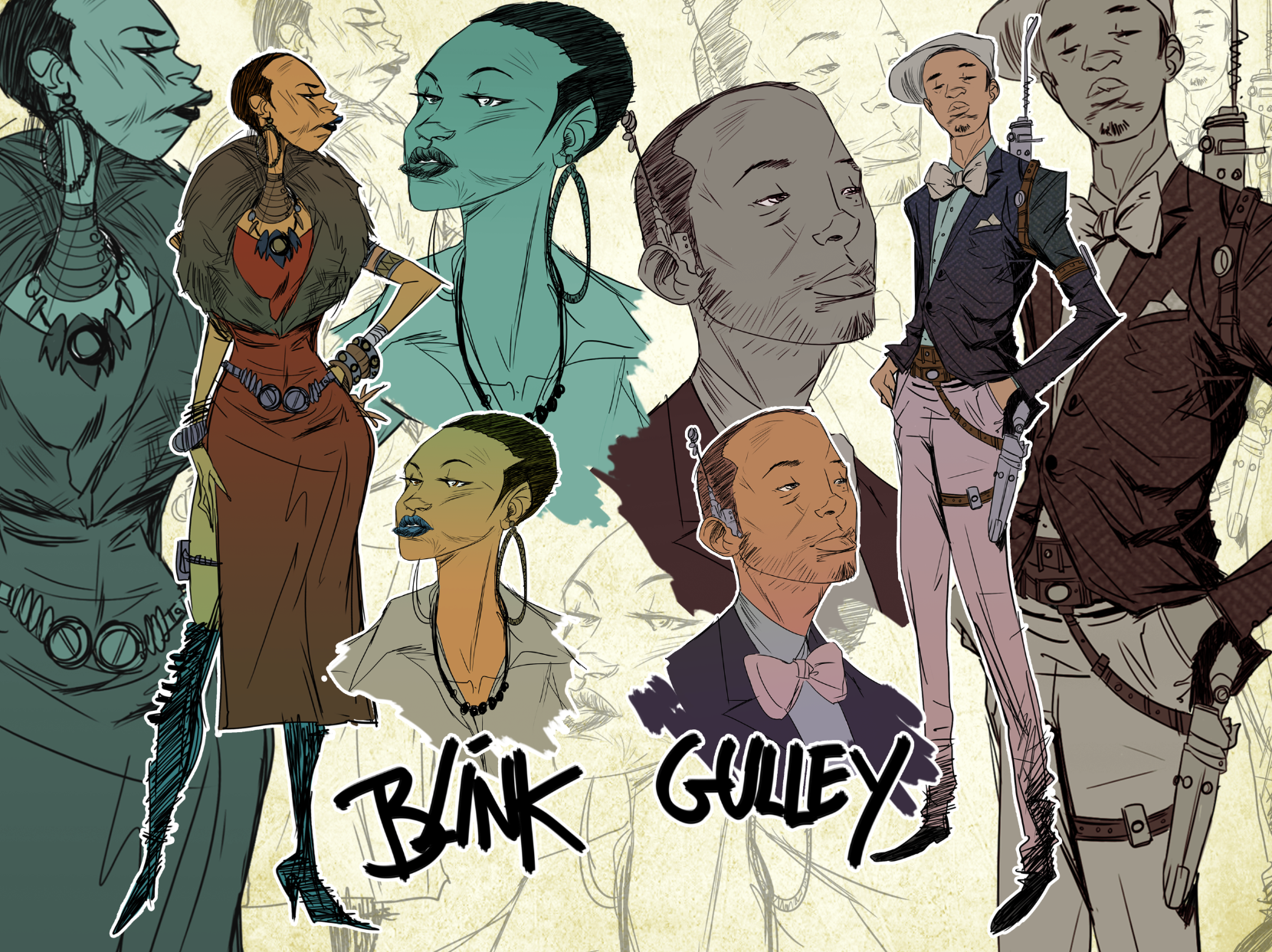 Brown: Like in any family dynamic, you have certain expectations you want for your children. Blink has certain expectations of who she wants to be, in this story. She wants to go against the grain. They both want to go against the grain of what the traditional roles are, as far as demon hunters. Cullen’s still trying to learn the trade. He’s still very new; he makes a lot of mistakes. Blink is more or less the perfect soldier. Yet, she’s really not meant to be a soldier yet in this dynamic.

On Setting This Series In Harlem In This Time Period, As Opposed To The South 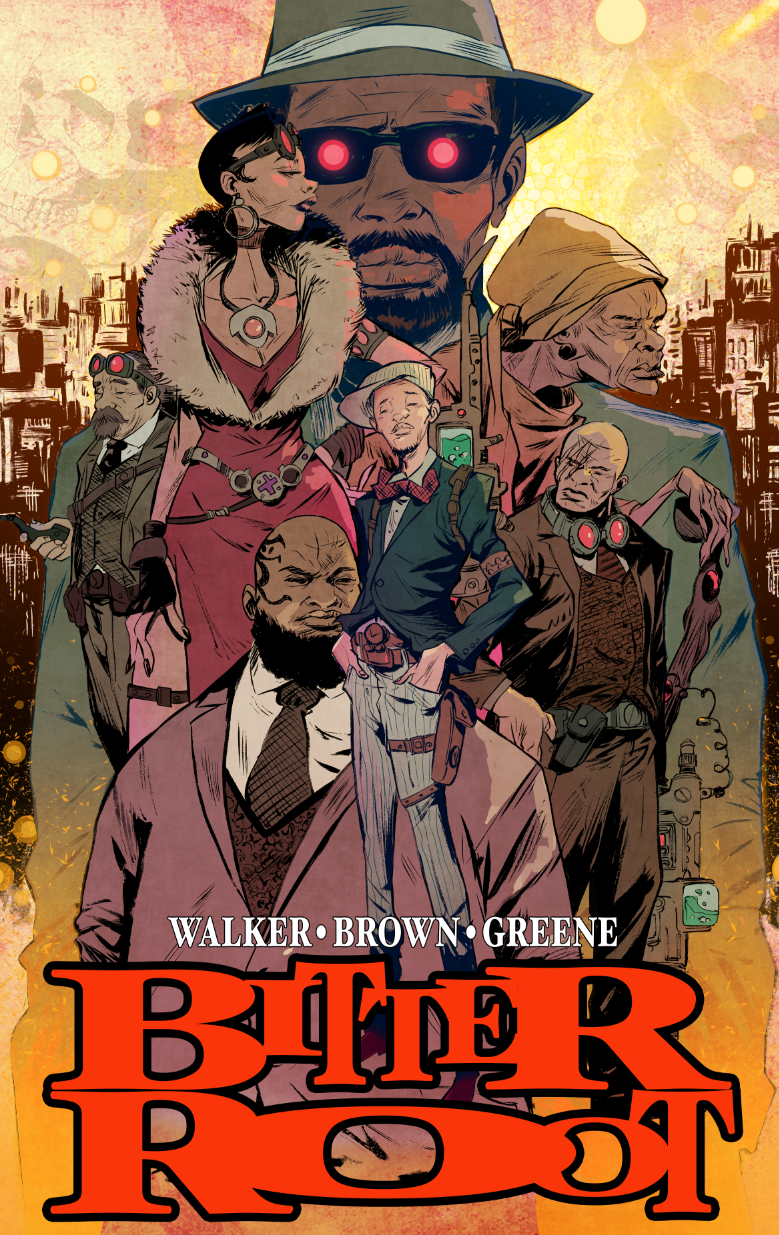 Brown: The Harlem Renaissance is just one of those time periods that really fascinated me. Of course, it’s about an African-American family and the Underground Railroad, but the concept of what we’re building goes way beyond that and expands not just in Harlem but across the world.

On The Character Design Process, When Compared To Traditional Superhero Looks 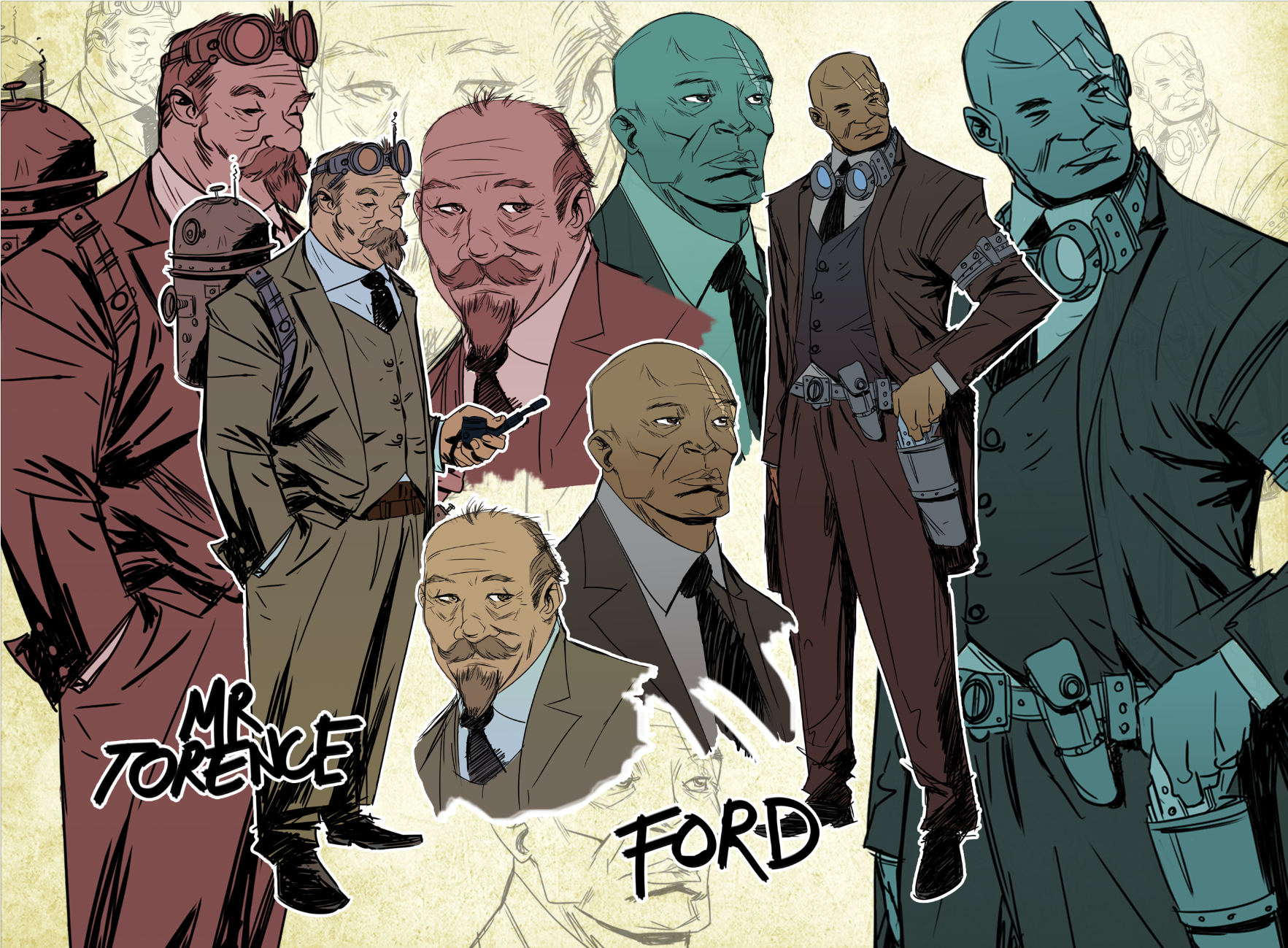 Greene: I’m a big proponent of fashion and trying to [create] a marriage between the two, in terms of superhero tradition. Many people appreciate that because it helps them on their cosplay budget.

Greene: Over the last three or four years, I’ve noticed this uptick in African-Americans participating in cosplay, specifically in steampunk. That really fascinated me. After Chuck introduced me to the original idea, I was like, “Wait a minute, I think there’s a genre for this already.” It’s kind of a natural fit and it just worked perfectly. That’s why I was able to do those character designs a little fast than I normally would.

On The Importance Of Harlem As A Setting, And How 1920s Harlem Is Relevant Today 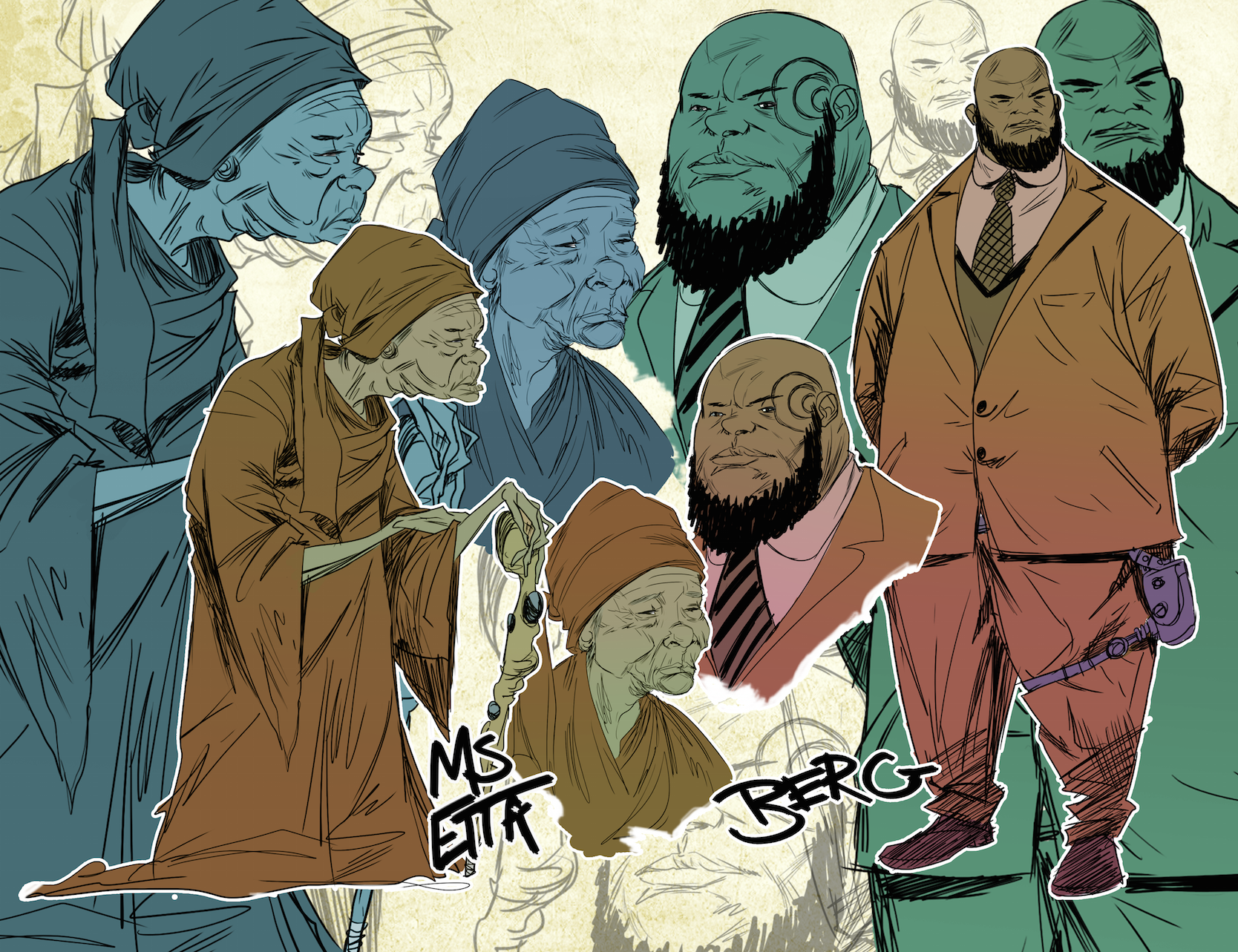 Brown: Harlem is an important setting because there was so much going on. Artists, musicians, singers… a lot of great things were coming out of Harlem at the time. [I liked] the concept of these monster hunters that were poets, professors, doctors but they were also demonologists out there in the streets protecting people day and night. Harlem and the 1920s period, you can relate to current events today and the stories we’re telling in Bitter Root really relate to what’s going on in the news today.

Walker: When you look at what was going on in the Harlem Renaissance — and the Great Migration that, in part, led to the Harlem Renaissance — it was a lot of African-Americans leaving the South because of racism and this tone of oppression. Interestingly enough, we’re only two years away from the 100th anniversary of the Red Summer. One could argue that we’re seeing forms of violence that are reflective of that. Not in those same large numbers. Even though this is set in the 1920s, I’m one of those people who believe it’s a lot easier sometimes to give somebody a bitter pill — or a bitter root, if you will — if you couch it in the past. It makes it more palatable. And then you just have fun with it. There’s so much rich history and a lot of that rich history — which isn’t just black history, it’s American history — is completely forgotten or never talked about. So we’re just picking through and discovering stuff and going, “Oh, wait a second, what if we use this?” I’m still trying to figure out how to work in San Juan Hill. People are like, “What’s San Juan Hill?” and I’m like, “Shame on you!” Before there was Harlem, there was San Juan Hill…

Yeah. Black neighbourhoods, black enclaves have been here since we’ve been here…

Walker: …and we’ve been here since the beginning. We were slaves here. Most people don’t remmeber that there were slaves in New York City or that New York State was opposed to ending slavery.

… a lot of that rich history — which isn’t just black history, it’s American history — is completely forgotten or never talked about.

Speaking of history, cameos from historical figures? Langston Hughes, Marcus Garvey, Madame C.J. Walker… you can’t put a series in the middle of the Harlem Renaissance and not have these people show up.

Greene: Sounds good to me!

Walker: Yeah, let’s do that!

Walker: We have the list and I’m the bad guy because I’m like, “No, no, the time frame we’re working in, this person can’t show up because they weren’t around” or something like that.

Greene: I’ll get super excited, like, “Oh, wow it’d be so cool to draw [someone] and [David will say], “That’s not technically the right era…”

Brown: David is incredible at that. He’ll point out the most minute thing and say that doesn’t fit…

Walker: And I know it’s annoying. I’m trying to loosen up. We’re figuring stuff like that out, [which you have to] when you mix fiction with fact. I don’t want people reading Bitter Root and going, “Y’know, there were really monster hunters in Harlem during the Renaissance!” No, we’re making this up. Then they get lost in what’s fact and what’s fiction. I’ve seen this recently with The Get Down [on Netflix], where people are watching it and think it’s all 100 per cent fact.

On #BlackHeroesMatter, A Social Media Movement Started By Walker And Other Black Comics Creators 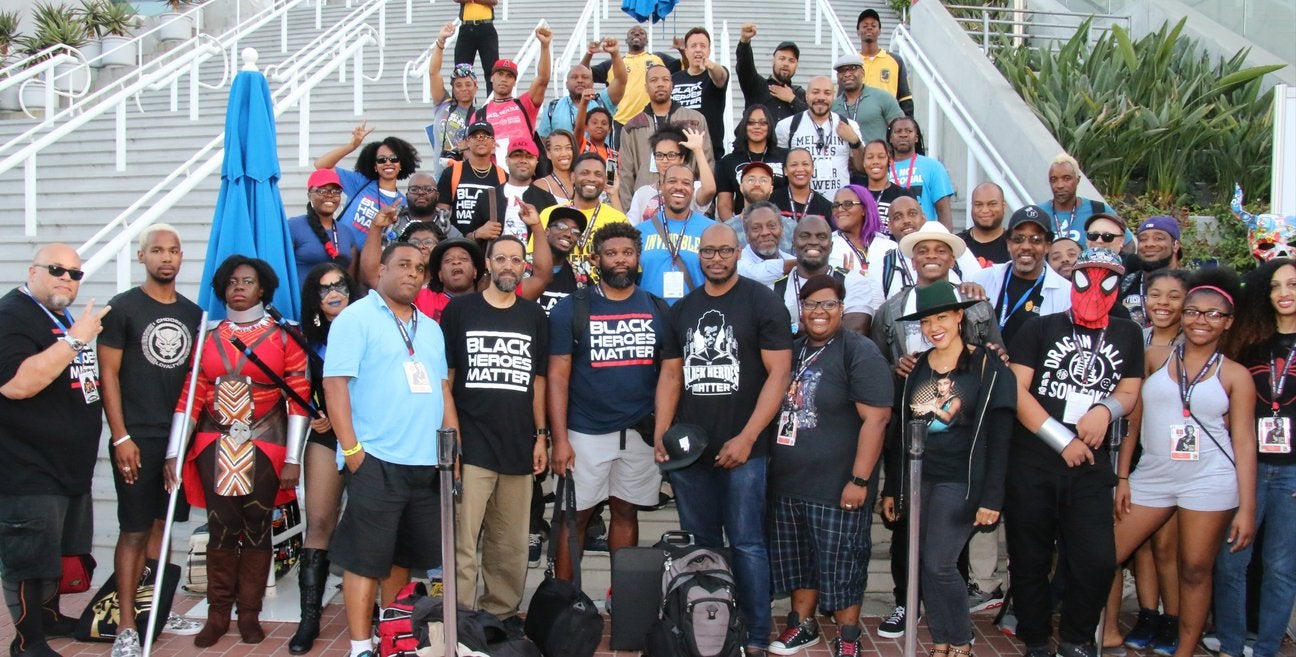 Walker: When I was a kid growing up reading Marvel comics, there were like, five primary black characters. There was Luke Cage, there was Falcon, there was Black Panther, and if you really wanted to stretch, there was Misty Knight and there was Storm. And that was over 40 years ago. And now, there is Luke Cage, Falcon, Misty Knight, Storm, Black Panther. Not much has changed. Some of these characters are bigger profile and there are movies and there are TV series, but they’re not as present. And the moment they are made present, there’s a faction of people out there that claim we’re trying to take over comics and we’re trying to leave them out and we’re oppressing them, as if they could actually be oppressed. The thing that they don’t seem to understand is that that mythology that comics represent to them, that all the things…

…the aspirational aspects of human nature…

Walker: Exactly. [The idea of] understanding our place within our universe and understanding that with great power comes great responsibility — they don’t understand that black folks need this too and that women need this too. And that people within the LGBT community need this — everybody needs this. And they feel that they have a stranglehold on it, they don’t want to let go of it. And it’s like… well, I am going to break your grip. And that’s it. And I find it incredibly disheartening that I, as someone who’s in his late forties, is still looking at this industry and going, “Not nearly enough has changed since I was a kid.” And it’s like… well, what am I going to do? I’ll do this, and then I’ll die. Until then, I’m just going to keep pushing.

Greene: To segue into what David said, seeing Luke Cage on the shelf, it was life-changing for me as a kid . It made me realise that, “Wait a minute — you mean to tell me this brown person, he’s able to do some of the things that I saw Captain America do?” Or even the Hulk, or Spider-Man, or what have you. It was empowering. And like what David said, not nearly enough — but that was enough. For me, at that moment. and we’re at this place in time in our culture, not society, where we’re staring for it. Just having conversations with people on the street about what we’re doing, you can see the excitement about what we’re sharing, and they’re clamoring for it. So it really is kind of a satisfying full circle to know that we could possibly inspire a group of people the same way I was inspired when I was young, as well. So, you know, that’s why it matters, so…

Brown: Just sitting at a con, sitting with David, other adult African-Americans come up to us — and they’re not really comic book fans — but come in to see what’s going on. They get excited to see us, because, we represent them. Representation, that’s why it’s so important. They get literally excited about what we have. They want to know how we got started. And they see themselves in us. And the representation matters. For my children and for Sanford’s kids. You know, it’s important to get these characters out there.

Walker: And the adults bring their kids around, and then it becomes — “You could do this someday.”

Greene: We’ve had institutions of higher learning reach out to us, already, wanting us to come speak. Historically black colleges and universities, specifically. So, it’s really… we understand the weight. I think we do.

Bitter Root is due out from Image Comics in spring/summer 2018.