Burying Beetles' Embalming Butt Juice Is Even Worse Than It Sounds 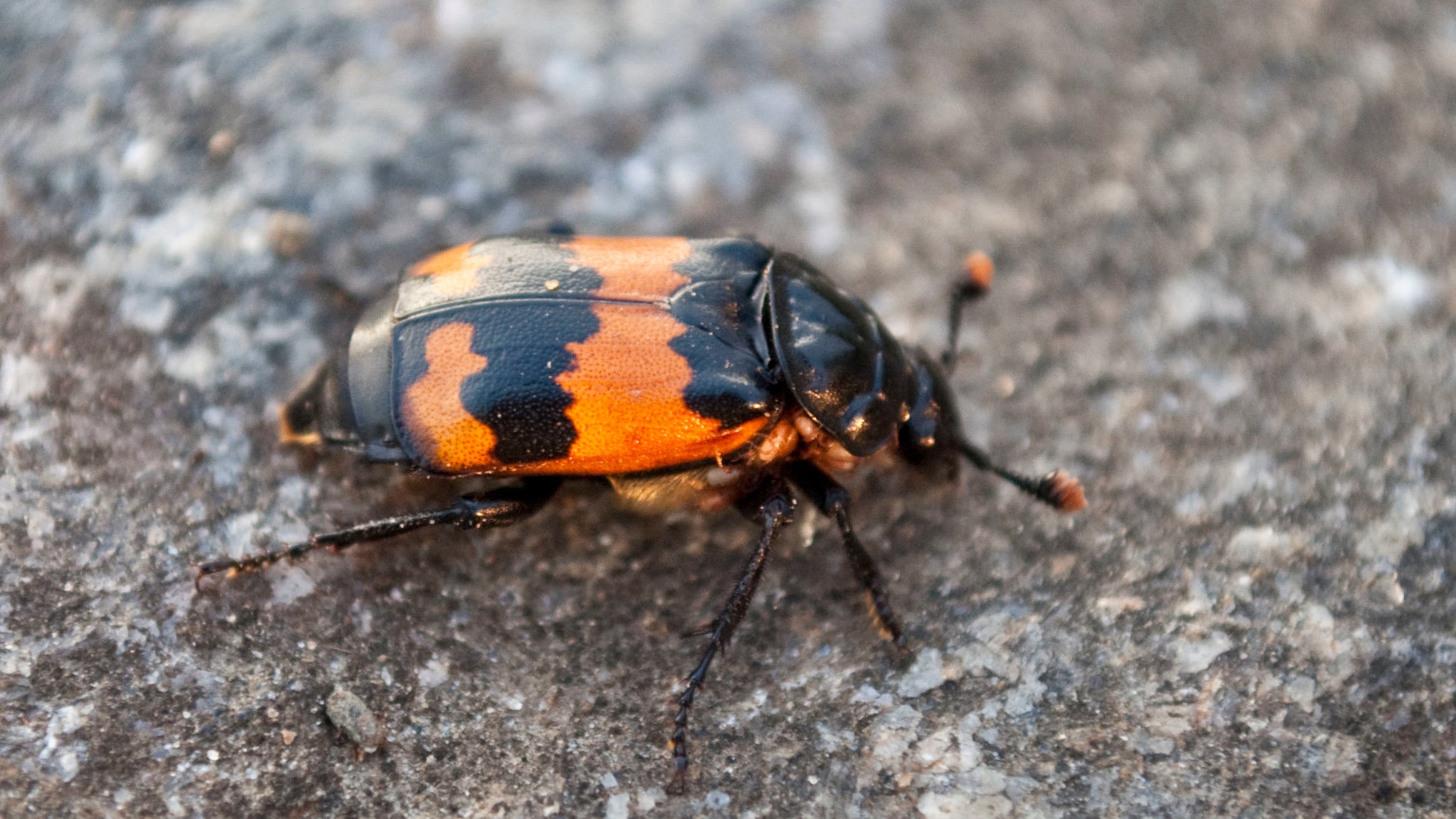 Burying beetles (Nicrophorus) are hard to miss. The insects aren't big, but most species are painted with vibrant, orange blotches on a glossy black background. According to new research, walking around dressed in their Halloween best may have an important function. The coloration may be "aposematic," bright and conspicuous to sternly warn other animals of the wearer's unsuitability as a meal. So, what is it about the burying beetle that makes it noxious to would-be predators?

Science was already well-acquainted with the burying beetle's keister seepage, but in a totally different context: No insect brings its children into the world in a more nauseating manner than burying beetles. A mating pair will find small animal carrion, dig it and themselves into the soil, pluck out the fur or feathers, and then slick the corpse up nicely with the butt juice, which has strong anti-fungal and anti-bacterial properties, basically embalming the body. The macabre crafting sesh gets the little taxidermists all worked up, and they proceed to mate atop their prized love-carcass, undoubtedly while Berlin's "Take My Breath Away" swells in their subterranean crypt. After eggs are lain and hatch, the larvae dine on the preserved flesh. This was the known story, but a study now published in Behavioural Ecology suggests that there is a second role for the butt goop: protecting adult beetles from predators.

Since there is often overlap in what's noxious to ants and birds, the beetles' anal secretions would likely be just as nasty towards feathered foes. If so, the intense orange patches on the beetles' exoskeleton could work as an evolved "aposematic" warning signal. But signals are meant to be very noticeable to the would-be predator, so how exactly do burying beetles look from a bird's eye view? To find out, the research team evaluated how the beetles' markings would look to an insect-eating songbird against a variety of different backgrounds, like rocks, leaves, and twigs. They did this by using a computer program that determines how visible patterns are based on what we know about how bird eyes work. The orange markings appeared to be highly conspicuous to bird eyes in many scenarios and backgrounds, making the pattern a successfully communicated "caution" sign (interestingly, the less colourful species of burying beetle are more regularly eaten by birds).

Burying beetles have seemingly evolved a way to be disagreeable towards an surprisingly wide swath of the Tree of Life, all thanks to their multi-purpose butt juice. They can simultaneously fend off rot microbes from their cache of Gerber brand carrion, and protect themselves from hungry wildlife. All the while, they confidently advertise their repulsiveness with a neon orange marquee. Perhaps the lesson is to go through life like a burying beetle. Proud, honest, and with an arse full of hazardous chemicals.