Honest Abe is lying about being human. The people who handle Walt Disney World’s Animatronics have built an all new, slightly frightening Lincoln that makes the perfect facial expressions for reacting to the upcoming talking Trump in the Hall of Presidents. 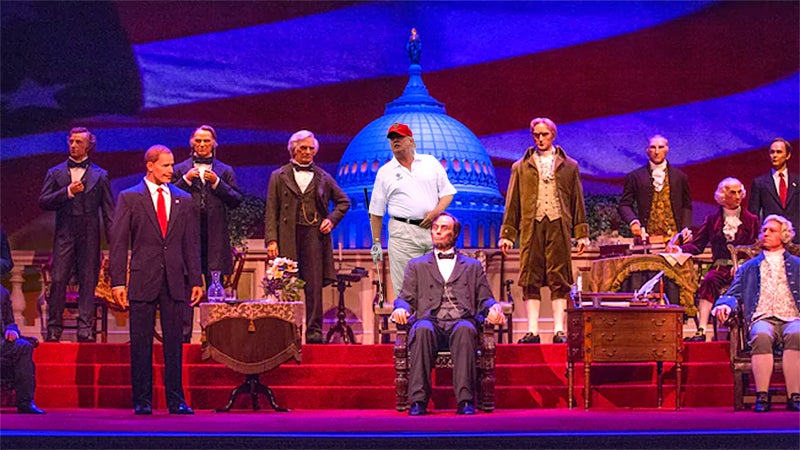 When President Trump was elected, many wondered what would happen with Walt Disney World's Hall of Presidents attraction in Florida. Back in May, Motherboard reported that the new robo-Trump would break tradition and might not speak at all. But Disney announced yesterday that President Trump will indeed speak when the attraction reopens.

Garner Holt Productions [GHP] has built thousands of animatronic figures for theme parks over the course of its 35-year history. Most recently, the studio has taken charge of Disney’s audio-animatronics and its now showing off the most realistic Abraham Lincoln since Daniel Day-Lewis took home his third Oscar. With 40 unique motions and a new proprietary silicon skin that can replicate complex wrinkles, this is one of the finest examples of futuristic facial expressions we’ve seen.

There’s something extra unnerving about the robo-Lincoln when you watch the video demonstration with the Ken Burns-style Civil War music. It really drives home the way in which we’re watching a very famous dead man come back to life in an age that he just wasn’t built for. The cutting edge of robotics and materials starkly contrast with the visage that is supposed to be forever frozen in copper.

First debuted at Disney’s D23 fan club extravaganza in July, the bust of Lincoln is just a demonstration for now, and is planned to be part of a series called “The Living Faces of History” that will be offered to theme park clients and museums. As with so much advanced technology, this one started with work for the military. Company founder Garner Holt explains in a blog post:

We first implemented this sort of work in our projects for the US Marines in the Infantry Immersion Trainer at Camp Pendleton. We created a series of animatronic townspeople to populate the immersive training environment — some of them were slated to be hostile combatants. An effective way to illustrate an animatronic character’s scripted intentions or whether they are friendly or hostile is through changing the figure’s facial expression — in this case, our figures could scowl or raise their eyebrows and smile or frown, all accomplished by mechanical means beneath the animatronics’ silicone face masks.

Currently, the Shaman character in Disney’s World of Avatar attraction is touted as the most advanced animatronic its team has ever made. The company has declined to outline the exact specifications of that model, but all one has to do is look at the video to see its facial expressions are nowhere close to as detailed as this Lincoln. Advancements in servo-motors have allowed for smaller, more subtle expressions to be achieved by GHP’s engineers and Holt claims that its latest creation can behave in unique and not essentially-linear ways. In other words, these facial movements can, to some degree, go off-script.

Holt says that most animatronics move at a rate of 32 frames per second. Lincoln can pull off a smooth 1000 frames per second and that gives you an idea of just how much innovation will be required for robots to look like Haley Joel Osment in AI. There are times when Lincoln comes close to being convincing, but the speed of its movement seems to be the biggest giveaway. That said, the eyes have always been the hardest thing to accurately reproduce and Abe occasionally shows flashes of life in that department.

Based on this demo, we have to say that the future Hall of Presidents has the potential to be a can’t miss horror show.