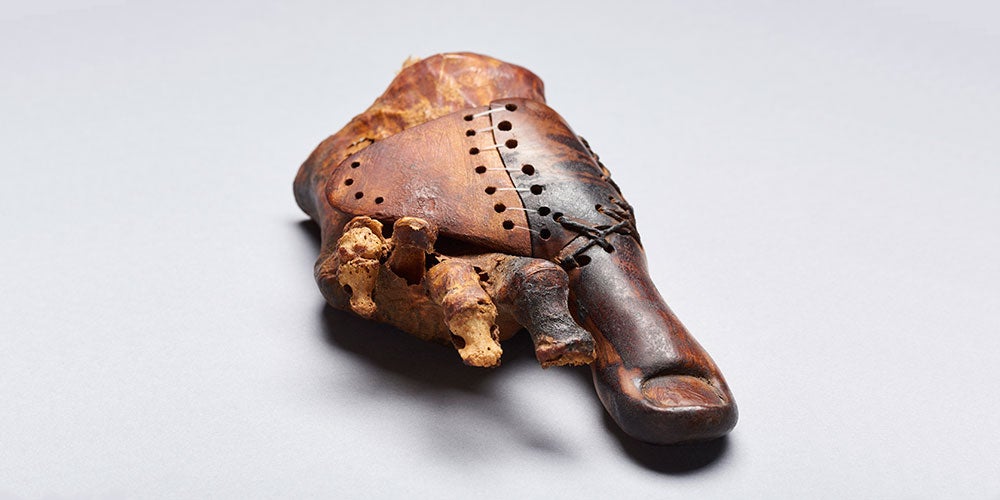 An ongoing reexamination of an ancient Egyptian wooden toe is shedding new light on how the remarkable wooden prosthetic was manufactured, and whether it was used for cosmetic or functional purposes.

It's called the Greville Chester Great Toe, and it's one of the earliest prosthetic devices known to scientists. The Iron Age prosthetic was discovered by archaeologists 17 years ago in a plundered tomb that was carved into an older burial chamber known as Sheikh ´Abd el-Qurna, an acropolis just west of Luxor, Egypt. A team of researchers from the University of Basel and the University of Zurich are currently reexamining the device, and the archaeological site itself, using state-of-the-art techniques — and they're learning some extraordinary new things about it.

According to the new research, which is still unpublished, the artificial toe belonged to the daughter of a priest. Given the quality and craftsmanship involved, however, it must've been a priest of high social standing. Using modern microscopy, X-ray technology and computer tomography, the researchers were able to determine that the wooden toe, which was constructed during the early first millennium BC, was refitted several times to match the exact shape and fit of the woman who wore it.

They also documented the various materials and methods used to manufacture the ancient prosthetic. The artisan or artisans who made the device must have been very familiar with human physiology.

"The technical know-how can be seen particularly well in the mobility of the prosthetic extension and the robust structure of the belt strap," noted the researchers in a press release. "The fact that the prosthesis was made in such a laborious and meticulous manner indicates that the owner valued a natural look, aesthetics and wearing comfort and that she was able to count on highly qualified specialists to provide this."

This woman may have been self-conscious about not having a big toe, and this device, which served both a functional and cosmetic purpose, could have done the trick. The Greville Chester Great Toe is providing us with a remarkable glimpse into the past and our civilisation's first attempts at creating prosthetic devices.

Ryan F. Mandelbaum 27 Feb 2020 6:00 AM
On January 3, 2019, the China National Space Administration (CNSA) accomplished a human first: It successfully placed a lander on the far side of the Moon. Today, the team is revealing new insights about what they found beneath the lunar surface.