Lionfish Are Eating Fish We Didn't Even Know Existed 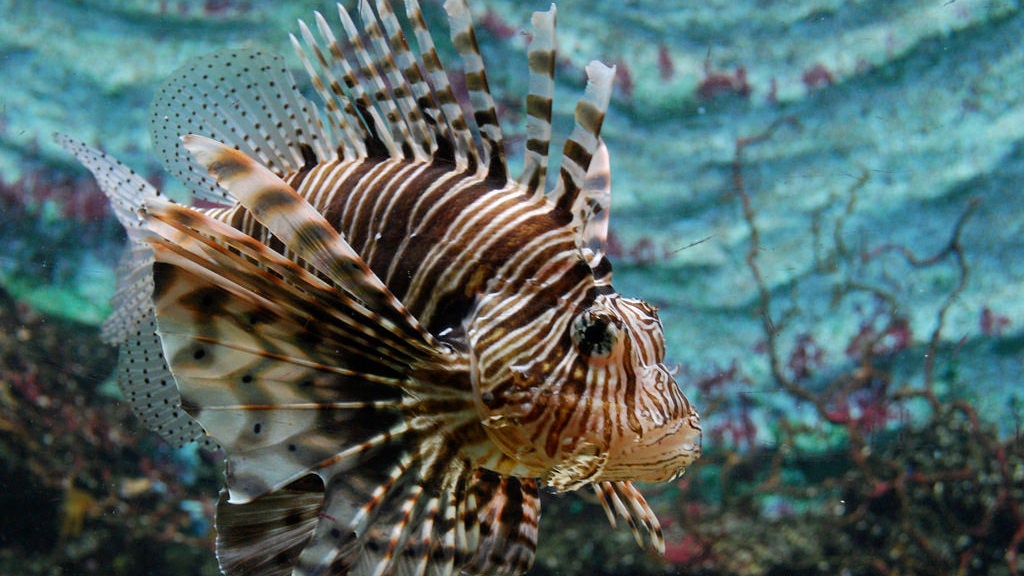 Lionfish have very low standards and will eat anything in sight. Although they're originally from the Indian and Western Pacific Oceans, these vacuum cleaners have been flopping around the Atlantic for the last 25 years, probably because people dumped them from their home aquariums. They're so stupidly hungry and abundant that sometimes, they just eat other lionfish. This would be fine if these venomous beasts just kept to themselves, but because they have very few predators in their new home, lionfish get to ruin everything else around them, too. Seriously, they're such a nightmare that scientists are trying to fight them with robots.

The cherry on top of this crap sundae is that now, lionfish are eating fish scientists haven't even been able to describe yet. According to a new study in PLOS One, researchers from the University of Washington have recorded video of a lionfish noshing on a previously unnamed species of goby (genus Palatogobius) off the coast of Curaçao. The footage was captured by a submersible vehicle — aptly named the Curasub — over the course of several dives from 2013 to 2016.

Researchers have named their new find Palatogobius indendius, or the "ember goby". These unfortunate little fellows are bright orange and less than 2.5cm long, living at depths of about 117m. While the ember goby is still abundant in this region off the coast of Curaçao, it doesn't bode well that lionfish are preying on animals in such deep reefs. These ecosystems are poorly studied, so who knows how many other fish lion fish are terrorising that we don't know about.

In fact, lionfish have a history of hurting goby populations elsewhere.

"Unlike many other reef fishes that can grow large enough to avoid predation as adults, gobies are vulnerable to predation by lionfish both as juveniles and adults," the researchers wrote. "As a result, lionfish have led to local declines in biomass and recruitment in some Caribbean gobies, and several species are now listed as 'near threatened,' 'vulnerable,' or 'endangered' by the IUCN Red List of Endangered Species, due in part to potential threats by lionfish."

While the study doesn't represent the eating habits of all lionfish, the research is still pretty unnerving. Where do lionfish draw the line? Where does the carnage stop? Our best shot at taming these predatory beasts might be these robots, which are essentially vacuums controlled by PlayStation 4 remotes. Innovation rules.

Fingers crossed it works, because the oceans are pretty screwed otherwise.