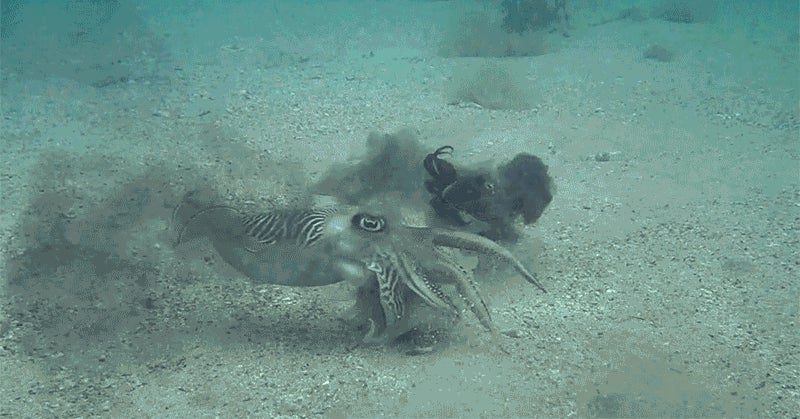 When you hear "cuttlefish," naturally, you think "cuddly," right? Turns out these charming little cephalopods can — and will — throw down if they have to, especially when it involves mating. In a newly-released video, two male cuttlefish suitors duke it out for a lady, and there's nothing that can prepare you for the violent ending.

The video was captured in on May 2nd, 2011, when a team of scientists from Brown University was scuba diving in Turkey. The researchers were observing European cuttlefish in their natural habitat, filming a male and a female swimming together after some nice cuttlefish sex. Sounds pretty relaxing, but then, a second male interrupted the happy couple to try and mate with the female, and things turned brutal very quickly. The ensuing altercation has everything — scorned lovers, jealousy, ink, and one hell of a plot twist. It's also the first time this sort of behaviour has been captured on video in the wild.

"We were surprised at how violent and aggressive the behaviours actually were," co-author Justine Allen, an adjunct Instructor in Ecology and Evolutionary Biology at Brown University, told Gizmodo. "This has been observed in the laboratory before, but never in the wild. And when it has been observed in the laboratory, the fighting usually doesn't get this aggressive...so for there to be so much ink and fighting was really one of the most surprising parts." Allen and her team's analysis of the video footage was published today in The American Naturalist.

Check out the video below, provided by Brown University, and try not to cry: