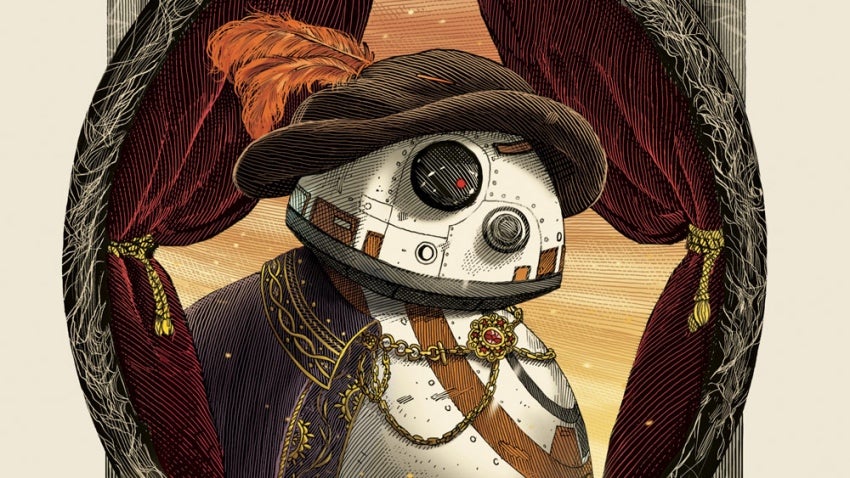 BB-8 is already one of the cutest parts of the new Star Wars franchise, but give him a floppy hat and flowing cape and I’m over the freaking forest moon of Endor.

The cover for Ian Doescher’s latest Shakespeare and Star Wars mashup was recently revealed, putting BB-8 in the role of a young gentleman of Jakku. The Lucasfilm-approved novel, The Force Doth Awaken, puts Rey, Kylo Ren, and all our other favourite Star Wars heroes in iambic pentameter. You know Kylo Ren was whiny before, just imagine him wallowing about his problems in a three-minute monologue.

In an interview with StarWars.com, art director Doogie Horner (wonder if he ever considered a career in medicine) said they chose BB-8 mostly because none of the other characters would have looked right as Elizabethan-era characters. I don’t know, I could see Rey sporting a clever man’s disguise, a la Twelfth Night. Then again, if that were the case we’d be deprived of Henry the BB-8th, and that would be a crime.

“It was sort of a process of elimination. We considered Rey, but one distinctive thing about her is her outfit, which we’d lose when we dressed her in Elizabethan clothes. I just can’t picture her character in a fancy dress. I also considered Kylo Ren, but again, I just didn’t know how to make him look Shakespearean in an interesting way,” Horner said. “BB-8 seemed like the right fit because he’s such a fun character, and this book is funny, too. Also, I like giving a supporting character star-billing like this.”

Doescher has written Shakespearean books for every major film in the Star Wars universe so far, excluding Rogue One: A Star Wars Story. The Force Doth Awaken is set to come out October 3. Here’s the synopsis:

Experience The Force Awakens as a Shakespeare play, complete with Elizabethan verse, Shakespearian monologues, and theatrical stage directions! As the noble Resistance clashes with the vile First Order, Rey, Finn, Poe Damaron, Kylo Ren, and BB-8 are pulled into a galaxy-wide drama — in iambic pentameter! Star Wars fans and Shakespeare enthusiasts alike will enjoy the authentic meter, reimagined movie scenes and dialogue, and hidden Easter eggs throughout. Chewbacca speaks! Leader Snoke gives a soliloquy! And the romance of Han Solo and Leia Organa takes a tragic turn that Shakespeare would approve of. All with woodcut-style illustrations that place Star Wars characters into an Elizabethan galaxy. The story may take place in a galaxy far, far away, but you’ll be convinced it was written by the Bard.