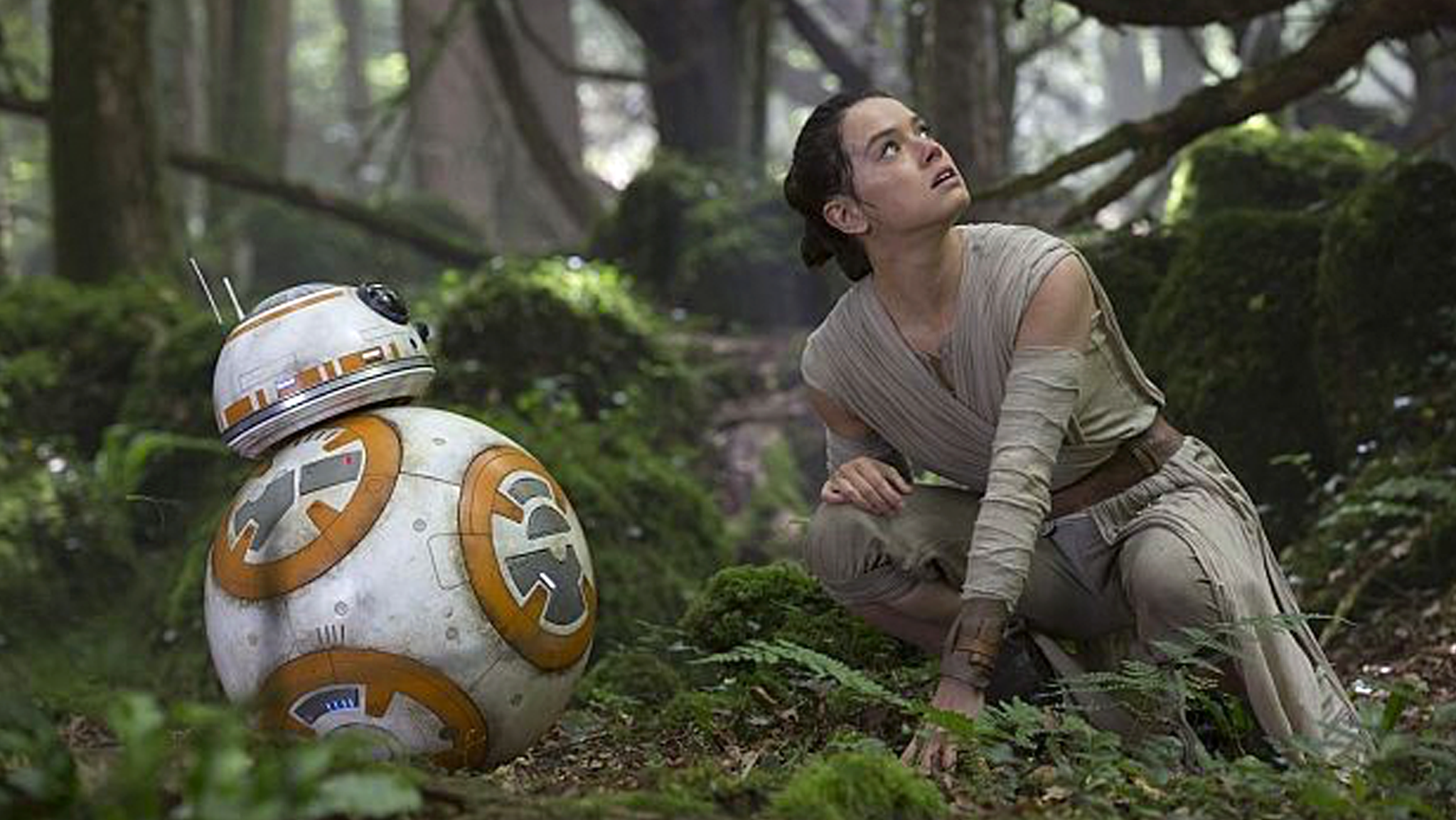 You'd be gravely disappointed if it was too surprising, or too sophisticated. So relax: The Force Awakens has the campy, familiar warmth of a jean jacket you haven't worn in 25 years that somehow still fits perfectly. It is a luxuriant river of movie-theatre cheese. American cheese. So you grin, not wince, when Oscar Isaac — as hotshot pilot Poe Dameron, who swaggers around like he walked off the set of either the Saturday Night Fever remake or the cover of Darkness on the Edge of Town — adds to this supercut. And then, two hours later: "Guys, we got a lot of company." You'll still be grinning.

Primarily, this is due to The New People, which is the best thing you can say about a film my theatre alarmingly (and accurately!) billed as Star Wars 7: It passes the torch, rather than merely clinging to it. As a dazed Stormtrooper named Finn, John Boyega is rad in this, goofy in a steely way and vice-versa, and suffice it to say he and Isaac get a bizarrely moving buddy-comedy chemistry going immediately. It's moving in part because Boyega most definitely does not look like Bruce Springsteen, though the script never hits you over the head with that.

Likewise a little on the nose, but still, look out for Daisy Ridley as Rey, a young scavenger who finds the droid everyone's looking for and picks up the thread from Max Max: Fury Road by stealing the movie even after the movie turns itself over to her willingly. Think Kate Bush does Die Hard. She does some stuff. I'm a little terrified of writing about this at all right now, TBH. No spoilers, promise! Christ, this is stressful. I feel like I've got my finger on the trigger of some ornate planet-destroying super-weapon.

9. "Some moof-milker put a compressor on the fuel pump."

I can, however, reveal that Harrison Ford delivers this line with roughly 65-per cent conviction, which is the precise ideal percentage, as always. Han Solo, too, does some stuff, including punch a couple guys (with 55 per cent of the usual action-movie star's physical grace, also ideal) and bark, "Move, ball" at the cute lil droid every child in American wants for Christmas. He is, thankfully, not quite yet too old for this shit, if only barely.

Yeah, so, Lupita Nyong'o is indeed playing this, uh, lady, and her scenes drive home the general point that this thing is maybe less a sequel than a remake (of the original trilogy), if not a full-on sheepish do-over (of the prequels). "What if Jar Jar Binks had recently won an Oscar and didn't suck," is her general vibe.

Ren says this at one point, fiddling around with some machinery. I might've misheard.

6. "THE END OF A REGIME THAT ACQUIESCES TO DISORDER!"

Once you've all seen this jam, let's discuss the logistics of the bad-guy situation, who's resisting who and why, what exactly has transpired in the onscreen time elapsed between the events of Return of the Jedi and now, etc. etc. It's some combination of confusing, redundant, and silly, which is in keeping with the river-of-cheese thing, of course, though don't expect too much gravitas from most of the villains here, who mostly prance about barking things like, "Weapon charged in 15 minutes, sir" at one another. Shoulda at least thrown in one good Spaceballs reference. There's a whole Lord of the Rings-style mo-cap evil-oracle thing happening, too, which I didn't have much time for, but neither does the movie, really, so.

The one notable exception villain-wise is Adam Driver as Kylo Ren, who manages not to grievously injure himself with his awesome/ridiculous sword and is most effective here if you pretend he's basically playing his aloof, entitled character on Girls, just given a dented helmet and transferred to a multi-billion-dollar intergalactic soap opera. He gets funnier as he gets angrier, but on purpose, which is nice.

Oh, sorry, this was the guy behind me, who reeked of Chinese food and had a great many discouraging words for the Batman v Superman trailer. That movie still looks like butt, especially now.

One pleasantly anachronistic thing about Star Wars movies in general is that not everyone is trying to be witty all the time, in sharp contrast to, say, the Avengers movies, where even Thor speaks fluent Joss Whedon-ese. Which works out just fine for those guys, mostly, but part of the paradoxical warm-jean-jacket effect here is how clunky and painfully sincere a lot of the dialogue is, reaching for Shakespeare without ever really actually trying to grasp it. It's like a Renaissance Fair with lasers.

This is a tricky thing, and as the prequels showed, if you fuck it up, the results are disastrous. But dialogue-wise, nobody gets totally boned here except, alas, Carrie Fisher, who nonetheless blows through some corny exposition with her usual blunt grace and gets more comfortable the fewer dorky words are crammed in her mouth. She's a crucial part of the single prettiest shot in the movie, a cheering crowd / warm hug / cool spaceship triptych that likely carries more emotional weight than anything in most of the movies that will get Best Picture Oscar nods instead of this one.

Plenty of pretty shots in this thing, of course: J.J. Abrams tries his best to reconcile the bootleg analogue charm of the original with the "watch a screensaver destroy Manhattan" CGI vulgarities that power most modern blockbusters, even parts of this one. The other thing we should discuss once we've all seen this thing is whether this series gets around the "millions of dead civilians" problem that plagued, say, the last Superman movie by just blowing up random planets at regular intervals at a respectful screen-saver-type distance, thereby explaining why it's Star Wars and not Star War. But ah, I'm in the weeds, so shit, just go see this, ASAP. The awestruck and inevitably sold-out crowd alone will likely be worth it. Please don't eat Chinese food beforehand.

Meanwhile, maybe I'll go watch it again myself, if only to make sure I got the "moof-milker" line right.