Someone Made A Working Holographic Cortana And It Is Amazing 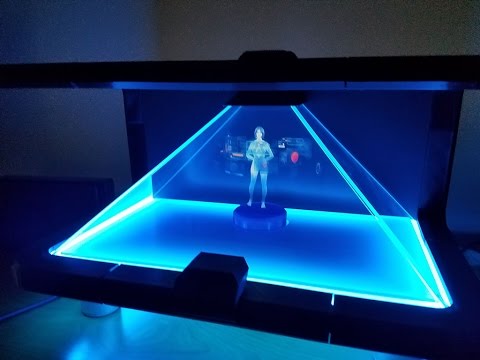 Jarem Archer has created a concept Cortana Appliance, which he explains as “basically what imagined Microsoft’s version of Alexa or Google Home would be like if they were to use the holographic AI sidekick from the Halo franchise.”

Still a work in progress, this is already looking incredible.

“It’s all powered by a Windows 10 device with 4GB of RAM and a built-in Arduino used for controlling the platform lights, Archer explains. “There’s a portable USB monitor on the top that reflects on 3 panes of mirror glass. The enclosure itself is a custom design I modeled. I then 3D printed each part of the assembly in PLA. There’s also an omnidirectional microphone that sits on top of the unit, and a decent mini speaker built into Cortana’s pedestal on the base.”

Archer says the software it runs is in two parts. There’s a Unity 3D app that presents and animates Cortana in three different camera angles, and communicates to a second app – a proxy service that parses data going to and from the native Cortana web service. “The proxy app renders the HTML from Cortana result queries which is then presented in the Unity app,” Archer says.

There’s also real-time face tracking with the front-facing camera, which moves the rendered camera perspective relative to a single viewer’s head position. “This makes it look a bit more 3 dimensional when facing it,” says Archer.

Archer’s wife was the motion capture actor for Cortana’s animations, which were recorded with dual Kinects before being applied to the Cortana model in Unity.

You can read more about it on Jarem Archer’s blog, and he’s also put up an imgur gallery with more photos and details.

I want one. Seriously.