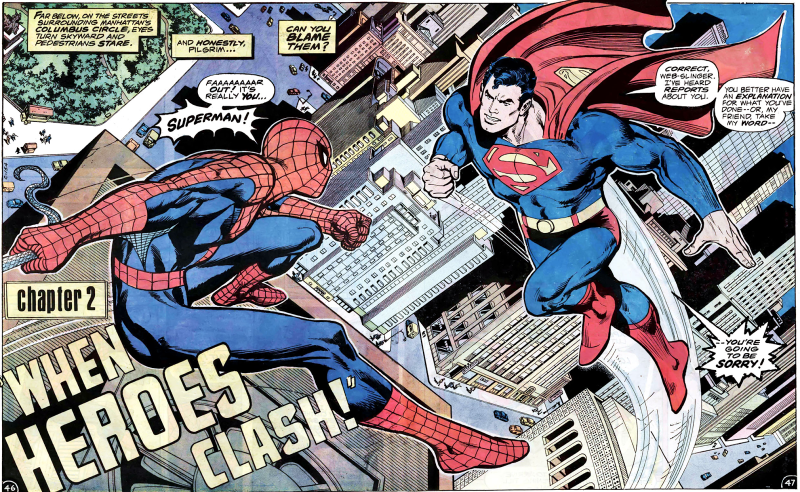 “Maybe you think comics are pictures of people walking and talking and beating each other up. Well, comics are art, which means… new ideas, new innovations.” A rarely seen 1978 documentary about the comics business has shown up online for the very first time, and it’s must-watch material for folks who want to see some of comics’ most important talents in their prime.

A rare copy of “The World of Comic Books” — owned by Word Balloon podcast/host John Siuntres — showed at Comic-Con International four years ago but, as far as I can tell, it’s never been available online before. I came across it via the Twitter timeline of author Sean Howe, who wrote the seminal Marvel Comics: The Untold Story. First screened on Canadian television 39 years ago, “The World of Comic Books” offers a peek at the internal processes of DC and Marvel editorial at a time when the medium was trying to be taken seriously.

Narrated by Jonathan Winters, the film apes the bombastic style that was in vogue in superhero comics at the time, complete with groan-inducing sound effects. But, despite that, it captures a rare glimpse of the people who made classic comics hashing out ideas with each other. One sequence shows Denny O’Neil, Neal Adams and Julie Schwartz as the creators talked about the famous cover of Superman vs. Muhammad Ali with the late editorial legend.

Another dramatically staged interview has Jim Steranko holding forth about putting film noir elements into his comics, with the creator coming across as if he himself is a private investigator. And, with a Black Lightning show on the way, it’s captivating to see artist Trevor Von Eeden at age 17 working on the character’s first issue. “World of Comic Books” also looks at the fan culture of the time, with clips from a late 1970s comics convention and interview segments with Ed Summer, the collector/historian who owned the Supersnipe Comic Art Emporium. Cosplay, critical consideration of craft, and creative collaboration on camera… if you care about any of these things you should watch “World of Comic Books.” And, you’re a reader who happens to know anything about the documentary short, please get in touch with me via email.