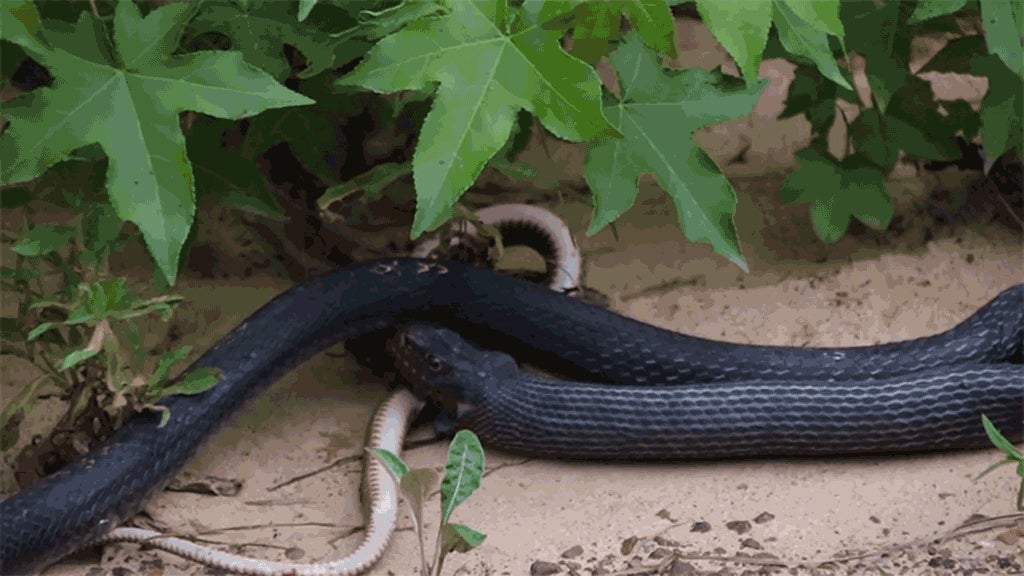 It must be a fever dream, you think, your skin burning and everything going black as some strange force compresses your body. Am I being digested? But suddenly, a muffled human voice begins chatting. A rush of air and you're free, your captor slithering away. Bewildered, you pose in shock for the camera.

Dang, you think. The encounter in question, uploaded to YouTube over the weekend, has become an instant viral hit.

So, what the hell's going on? I asked Sara Ruane, a snake expert and assistant professor at Rutgers University, Newark to watch the video for us.

"Snakes eat each other all the time," she said. "When snakes are startled by something or something is attacking them, one of their first lines of defence is to throw up whatever is in their stomach." That's because they no longer have food weighing them down, and it might scare the predator. I, too, would run away from someone vomiting their lunch on the street.

In this case, it's likely that the videographer, Christopher Reynolds from Newton, Texas, startled the bigger snake when he started filming. "As soon as that snake throws it up it takes off," she said. "Now it doesn't have this other snake weighing it down."

Ruane identified the bigger snake as a coachwhip (Masticophis or Coluber flagellum), based on its location and behaviour. The coachwhip is a common snake that hunts with its eyes and doesn't constrict its prey. It sort of just eats whatever it overpowers. She thought the smaller snake was either another coachwhip or a racer (Coluber constrictor), but it's harder to tell because it's behind a bush.

Snakes inside of snakes might be a surprise to you, but is actually quite convenient in Ruane's line of work. "People don't realise how many dead snakes you find on the road," she said. "Every once in a while you find one with another snake in their stomach and you get a twofer."