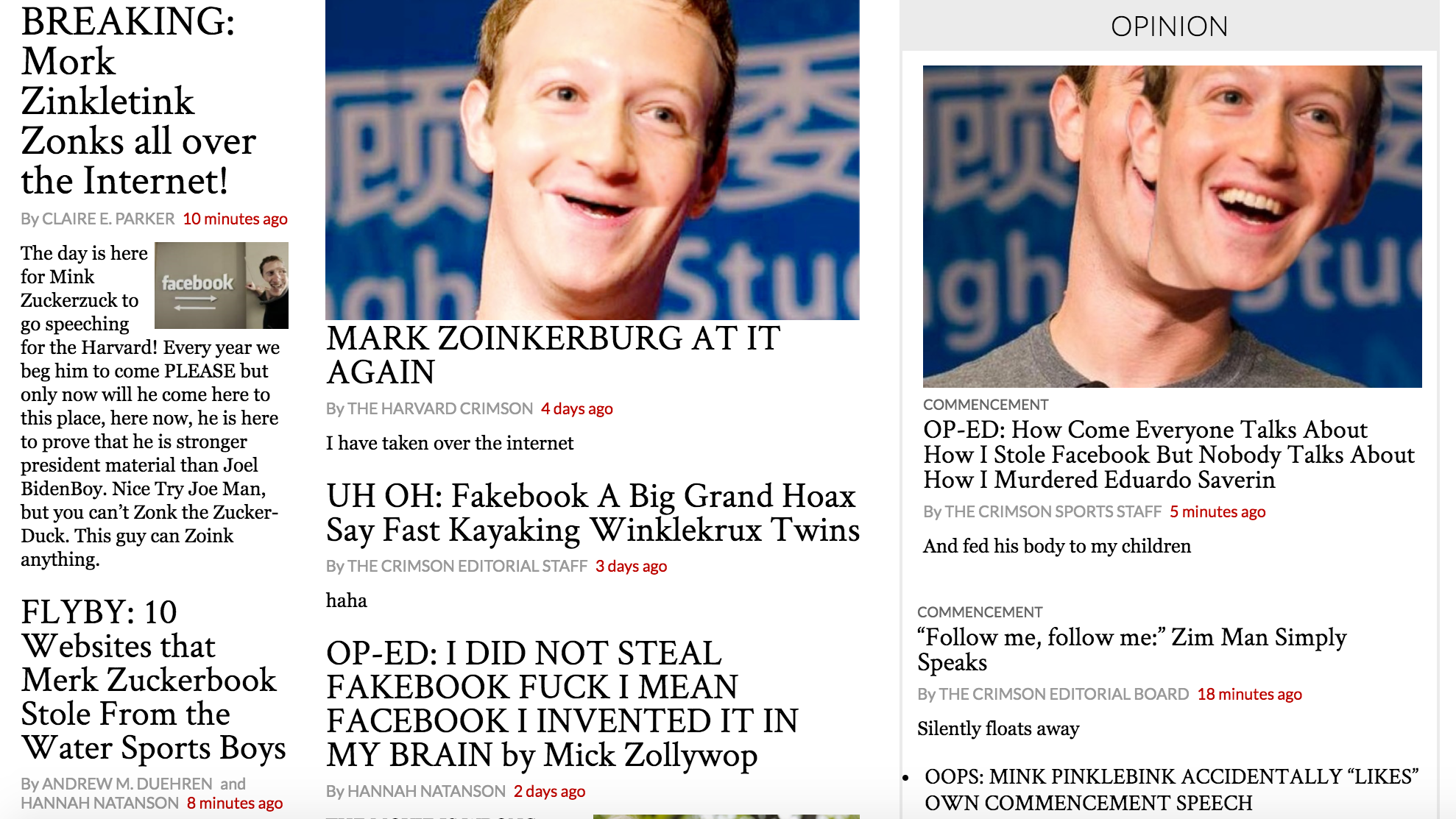 The Harvard Crimson has either become the victim of an incredibly funny prank, or Facebook is beta-testing its silent speech brain interface on university students.

Today, Facebook CEO Mark Zuckerberg returned to the venerable Ivy League institution he famously dropped out of, revisiting his old dorm room and giving a commencement speech to the graduating class of 2017. To commemorate the social networking titan's return to his alma mater, the website of Harvard's 144-year-old newspaper (or whomever gained control of it) ran as its front page story: "MARK ZOINKERBURG AT IT AGAIN."

Related stories included "BREAKING: Mork Zinkeltink Zonks all over the Internet" and "OOPS: MINK PINKLEBINK ACCIDENTALLY 'LIKES' OWN COMMENCEMENT SPEECH". In one image, Zuckerberg is depicted without eyebrows, and with abnormally small teeth.

The site has been intermittently unavailable (though archives confirm the Crimson's homepage actually did display this Incredibly Good content), so Gizmodo has had difficulty determining how many of these articles link to anything in particular. At least one — which was in the "most read" sidebar of the paper which served as a springboard for many award-winning journalists — had a landing page, and was exactly one sentence long.

It did not take long for others to notice these worthy additions to the paper's body of work.

@thecrimson oh my god somebody help the Harvard Crimson pic.twitter.com/UgjVrGo7aZ

The Harvard Crimson has been hacked (or this is a big joke. not sure) pic.twitter.com/jku2Vt2sV5

Thought it appears to have returned to normal, we reached out to The Crimson so see who is responsible so that we might hopefully hire them someday.

Current President of The Crimson Derek Choi responded to Gizmodo over email with the following statement:

Earlier today, The Harvard Crimson's website was altered by an unauthorised user. We are currently working to repair the breach. We regret any inconvenience to our users and look forward to the rest of Commencement.

Derek, you and your staff have nothing to apologise for.

Rob Bricken 24 Feb 2020 2:05 PM
In late 2019, The Walking Dead ended its 1.375-year streak of being genuinely good by reverting to its worst habits. Unfortunately, the 10th season spring premiere did not get the series back on track, although it did provide one of the most perplexing, bananas moments in the show’s history. So that’s something, I guess?