Coordinated Boa Attacks Are A Horror You Didn't Know Existed 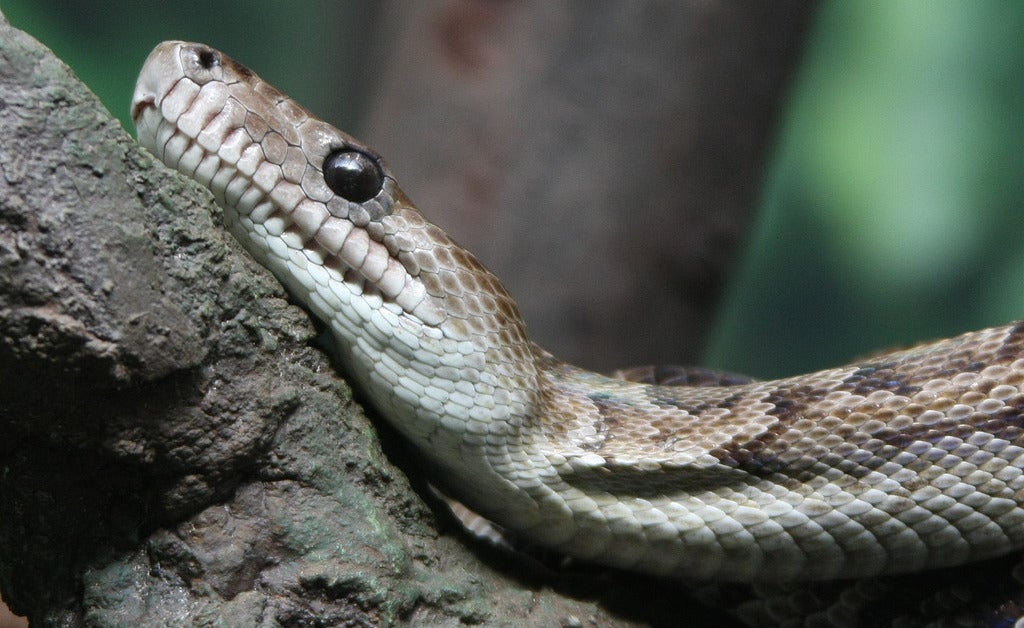 As twilight descends, nocturnal bat species rouse from their daily resting places to feed, creating spectacular clouds as they pour out of caves en masse. But look closer at Jamaican fruit bat colonies as they emerge from sinkhole caves in Cuba, and you may catch a glimpse of a concurrent macabre ritual: As the bats erupt from the cave, a deadly curtain of Cuban boas hangs in their path, aiming to snatch the winged creatures mid-flight.

That's right — these snakes coordinate their attacks, and the result is terrifying.

Vladimir Dinets, a research assistant professor at the University of Tennessee, Knoxville, was guiding a bird- and mammal-watching tour through Desembarco del Granma National Park, Cuba, when he first noticed the cavern-hunting snakes. Intrigued by the bold behaviour, he decided to take a closer look.

The boas involved could all be found basking near the cave's entrance during the day, while the bats slumbered in an adjacent chamber separated by a narrow passage. As daylight faded, some of the snakes would move from their warm nooks into the passageway.

There, they would dangle their serpentine bodies from the ceiling, ready to strike as bats flew past. Other snakes would take up similar hunting positions as dawn approached, catching the bats as they returned. During each potential feeding opportunity, Dinets dutifully recorded the position of the snakes as well as their hunting success, or lack thereof.

"There is an old dogma stating that reptiles are mostly solitary and stupid. My finding is just one of many recent discoveries challenging it."

After eight days of records, Dinets concluded the snakes coordinated their hunts, and published his results in the Animal Behaviour and Cognition. The first boa would pick its place. Then, when the next slithered up, it would position itself in near the first. And if a third snake joined in, it would hang with the others, too. Dinets considered that the snakes might all just prefer the same areas of the passage, but no snake chose the same segment twice during the entire study, suggesting coordination, not similar taste in locale.

And that coordination paid off — boas were significantly more likely to capture a meal if they hunted together. "Visual observations suggested that most bats were able to avoid flying near boas when there were one or two boas present, but with three boas present the bats had to fly either within striking distance from one of them (often colliding with the boas) or very low above the passage floor," Dinets explained in the paper.

While the snakes coordinated with one another, it's not quite accurate to say they hunted in a "pack" like wolves, as that implies a social aspect that Dinets didn't see. "I saw no evidence of direct communication," he told Gizmodo. "They just take each other's positions into account."

Still, coordination to maximise hunting success is practically unknown in reptiles (crocodilians and monitor lizards are notable exceptions). "There is an old dogma stating that reptiles are mostly solitary and stupid," said Dinets. "My finding is just one of many recent discoveries challenging it."

Intriguingly, this isn't the first cave where serpents have been observed hunting bats mid-flight. Writer, ecologist and wildlife photographer Neil Losin and his colleagues have observed a similar strategy among snakes in Puerto Rico. "We saw up to eight boas hunting at the same time, and it's certainly quite a 'gauntlet' for the bats to run," he said. But he and his team only observed and filmed — they didn't perform quantitative science to determine if the boas were coordinating their hunting.

There's also the famous Cavern of Serpents near the village of Kantenmo, Mexico, where tourists flock to see snakes snatch bats as they exit for the evening. Again, no one has looked closely for coordination. But given the number of examples of this style of cavern feeding, "it is possible that coordinated hunting is not uncommon among snakes," Dinets said. "But it will take a lot of very patient field research to find out."