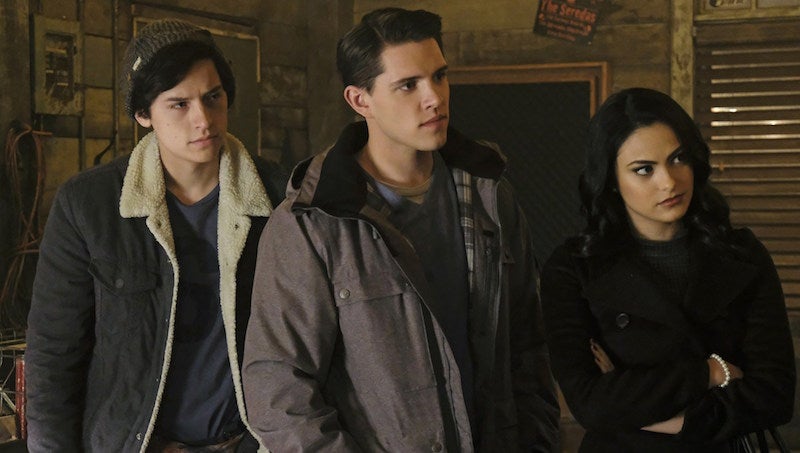 We finally found out who killed Jason Blossom yesterday. Of course, why he was murdered is still up in the air and a whole new mystery popped up. But none of that matched the episode's big reveal, which snatched the crown of weirdness from any other contender. And, in this show, that's some seriously stiff competition.

There was never a chance that F.P. Jones (Skeet Ulrich), Jughead's dad, was the actual killer of Jason Blossom. And if you had to pick someone to be responsible, you'd pin it on one of the wonderfully bananas Blossoms, right? Either Clifford (Barclay Hope) or Penelope (Nathalie Bolt) seemed creepy enough that they'd kill their son, although Veronica's (Camila Mendes) imprisoned dad Hiram, a bitter foe of the Blossoms, was also a candidate to have hired someone to do the dirty work.

We spent way too much time with the Gothic horror that is the Blossom family — or, as Alice Cooper (Mädchen Amick) describes it, "the witching hour at Thornhill" — this week for the answer to lie anywhere else. For a bit, Cliff was being relatively reasonable and Penelope was acting unhinged, so it looked like it could be her.

Then Cheryl (Madelaine Petsch) asks her mother what it was that made Jason run away. If Clifford didn't care about his relationship with Polly Cooper (Tiera Skovbye), then maybe it was a big secret about the family's maple syrup business? And that's when Penelope grabs her daughter Cheryl and drags her out to a barn (???) near the house filled with maple syrup and yells, "There it is. There is the sticky, dark, dirty truth. Maple syrup. Drown in it, why don't you?"

This, at the time, made even less sense than usual for Riverdale. (And it still kind of doesn't.) Because once the kids see footage of Clifford killing Jason and turn it over to the cops, Cliff's found hanging by a noose in the barn and there are huge quantities of drugs in the maple syrup barrels. Did Penelope mean the drugs when she had her breakdown? The Blossoms are so screwed up, she could have just been losing it. Also, oh no, is the local economy of Riverdale in trouble because of a drop in the maple syrup market? Is that why Cliff turned to running drugs? Will it ever stop being funny that everyone on this show treats maple syrup with deadly seriousness?

So, at the end of the episode another Blossom is dead — now poor Cheryl's lost her brother and her father — and Jughead's dad is cleared. 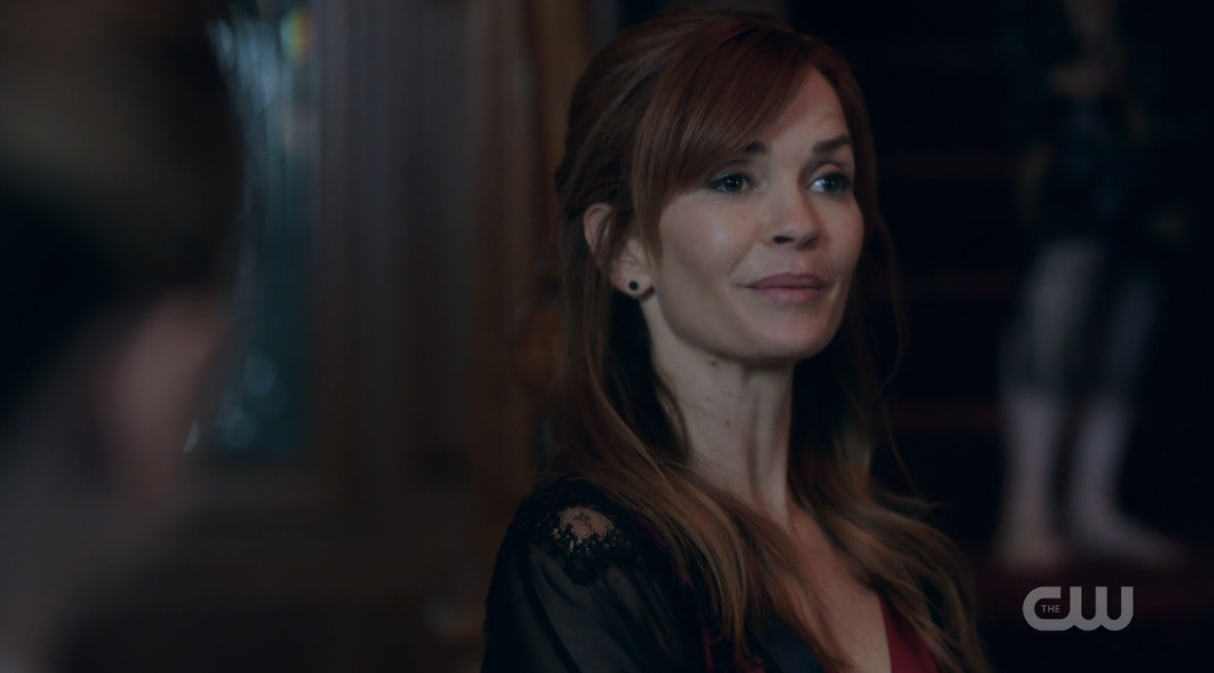 Penelope Blossom is the scariest person on this show (Image: Screencap from Riverdale, CW)

And yet, the best and weirdest revelation of the night had to do with maple syrup. Betty's dad Hal Cooper (Lochlyn Munro) sneaks back into his own home to be met by his wife with her gun (what the hell, Alice?), where he explains to Betty and Alice that the reason the Coopers and the Blossoms loathe each other isn't just business, it's blood. Betty's great-grandfather, who, remember, was swindled out of his share of the maple syrup business and killed by Cheryl's great-grandfather, was actually a Blossom. They were brothers.

(Also, everyone says "grandpappy" with the same gravitas that they say "maple syrup" and I have no idea how the cast makes it through any of this.)

So the Coopers picked their name to separate their branch from the Blossom family tree. Unfortunately for Polly, genetics don't change with estrangement, so Polly and Jason's relationship was a form of incest. And since the Blossoms are a Victorian horror story of a family, that revelation leads the Coopers to go get Polly back tout suite (prior to Cliff's hanging).

Of course, the Blossoms are full-on weird about this, too. Penelope has the same view on it that the ancient Egyptians had, saying that "Nothing could be more purely Blossom" than Polly and Jason's babies. Cliff says to spare him the "middle-class morality" because it wasn't like they were brother and sister, just distant cousins. (Bad luck for Cheryl; her family's willing to condone incest, but not enough for what she clearly wanted.) 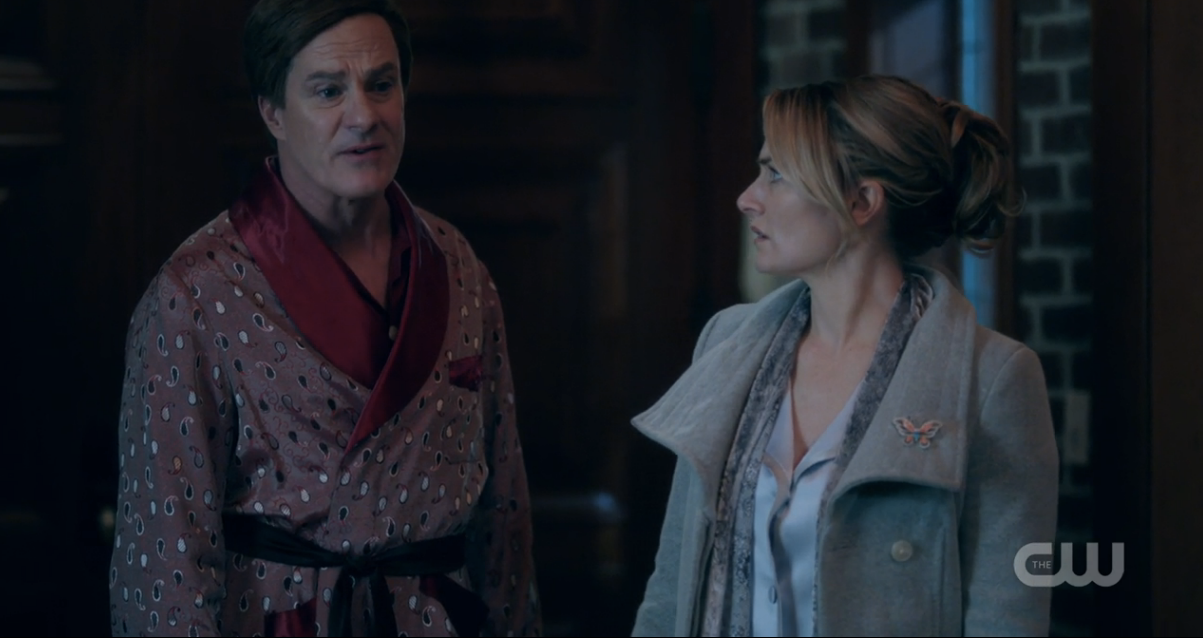 This is the face you make when someone says "incest was not a big deal" (Image: Screencap from Riverdale, CW)

I think the elder Blossoms were just trying to remove the idea that either of them would kill Jason, but they went over the top. Actually, I think Cliff was doing that; I think Penelope was fully on board with a Blossom-Blossom hybrid child. She is clearly missing a bunch of screws and it sucks for Cheryl that this is her only remaining family member right now. I'm predicting Cheryl moving in with the Coopers in season two. She clearly cannot stay with Penelope.

The death of Cliff and the continued issue of Hiram Lodge will probably take up much of the finale next week, since this episode feels like it closed out the major driving factor for the season. So no doubt the last episode has a big old twist and cliffhanger in it.

Most of this episode was about the kids figuring out the adults, which meant it was a lot less about them than it was their reactions to their parents' various complex plans and insane actions. Betty's "I'm a Blossom" face sums it up: 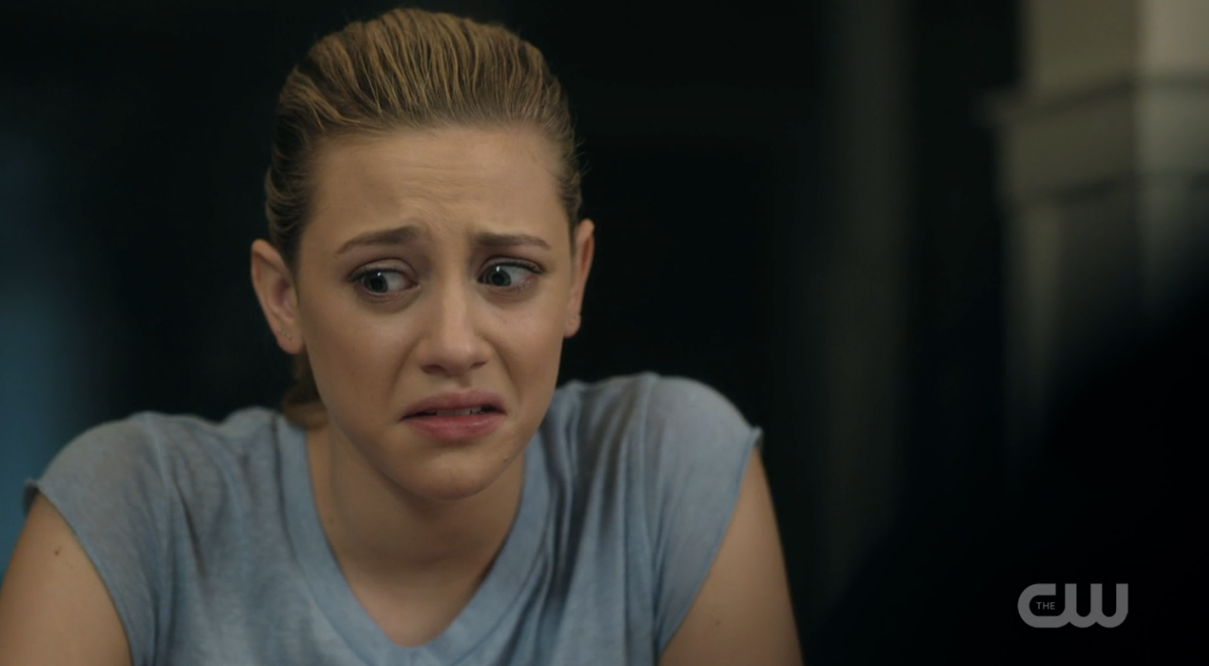 Hopefully, the season finale re-centres everything on the kids.

Random Shout-Out: Kevin's Serpent boyfriend takes a bus to San Junipero, the title of and location featured in the best episode of the cult-favourite show Black Mirror's most recent season. Which is an interesting shout-out and leaves me with all sorts of questions about how the Riverdale and Black Mirror universes interact.