Barcelona Has Some Pretty Cool Cars, And Surprisingly Cool Vans 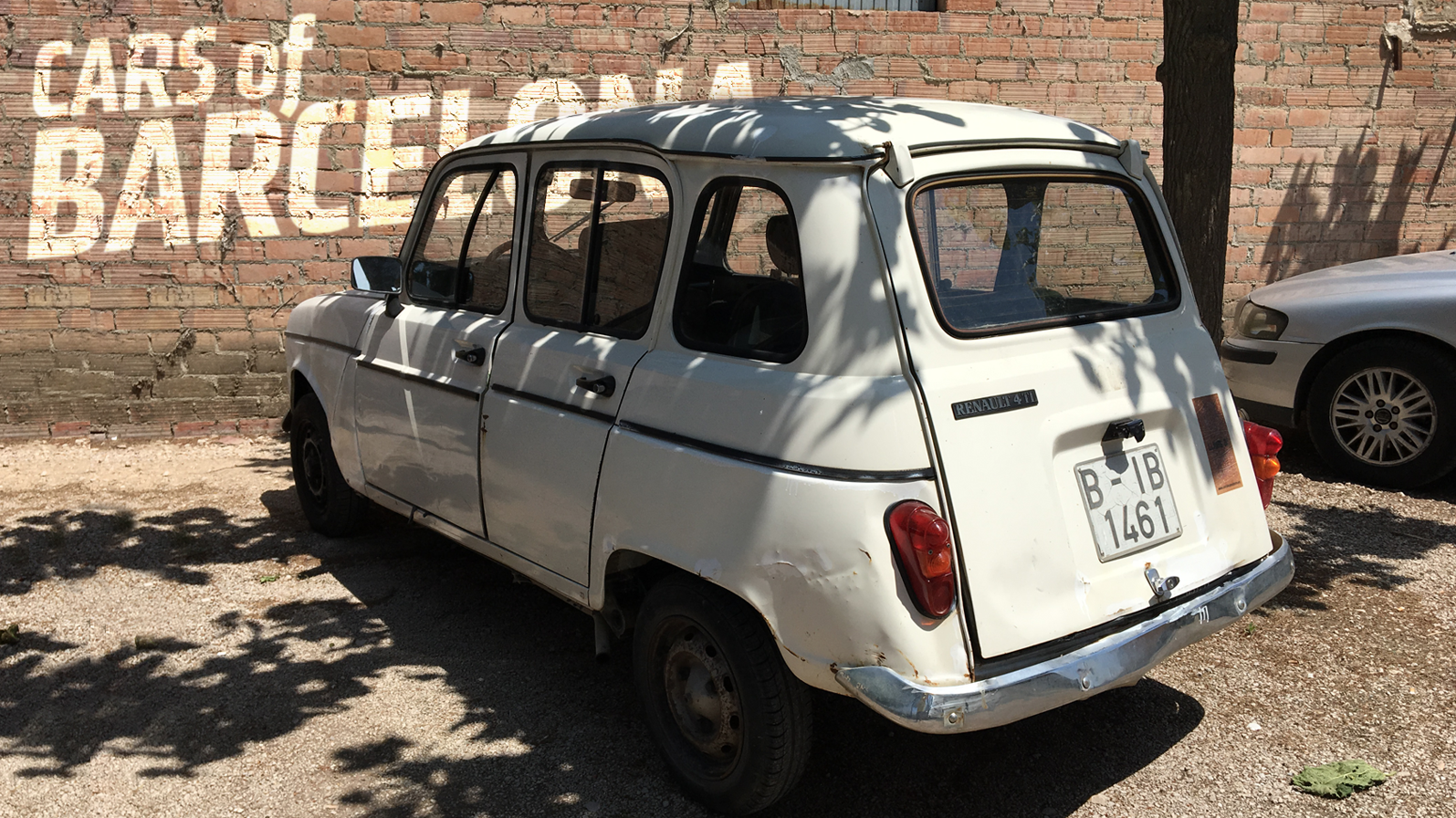 Last week I was in Barcelona thanks to Volvo, who wanted me to devalue some of their first production XC60s by driving them. I was happy to oblige, and even happier to scrutinize, in conversation-killing detail, the cars of Barcelona's lovely streets. The big surprise? I saw a lot of cool vans. Come on, join me on this magical tour of whatever happened to be nearby me!

I also want to mention that I got a lot of the nighttime shots of interesting cars because after the Volvo dinner the first night I was there, I was left behind by the bus that was taking all the journalists to the hotel, so I had to walk back.

Also, I was left behind because I briefly couldn't figure out how to work a bathroom door handle. So they made the right decision by leaving. 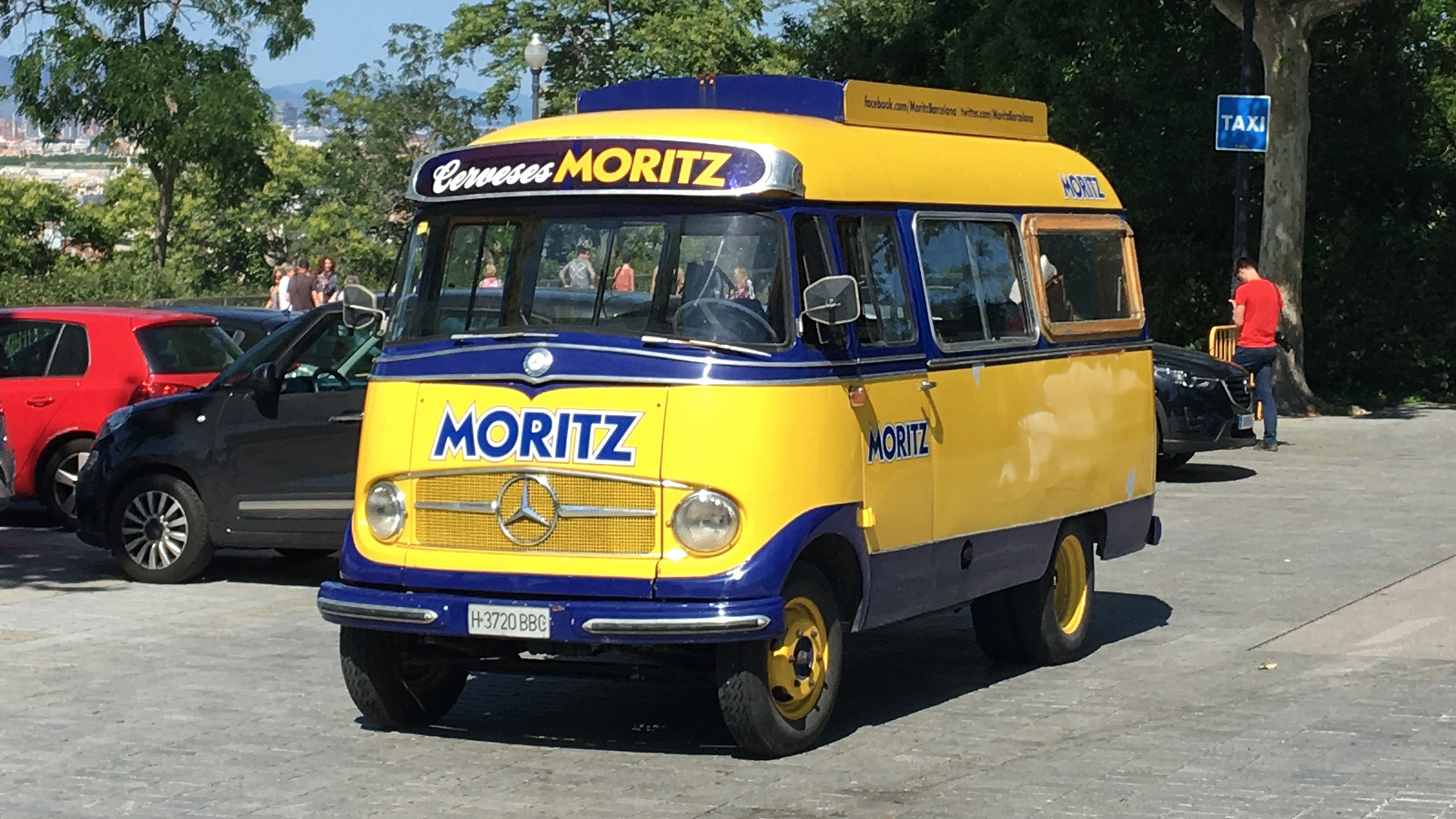 Remember what I was saying about vans? This wonderful Mercedes-Benz L319 was one of the first cars I saw in Barcelona. I'm guessing this is an early '60s one. It's got a job working for the Moritz beer company, whom I'm told has a fleet of these yellow charmers. 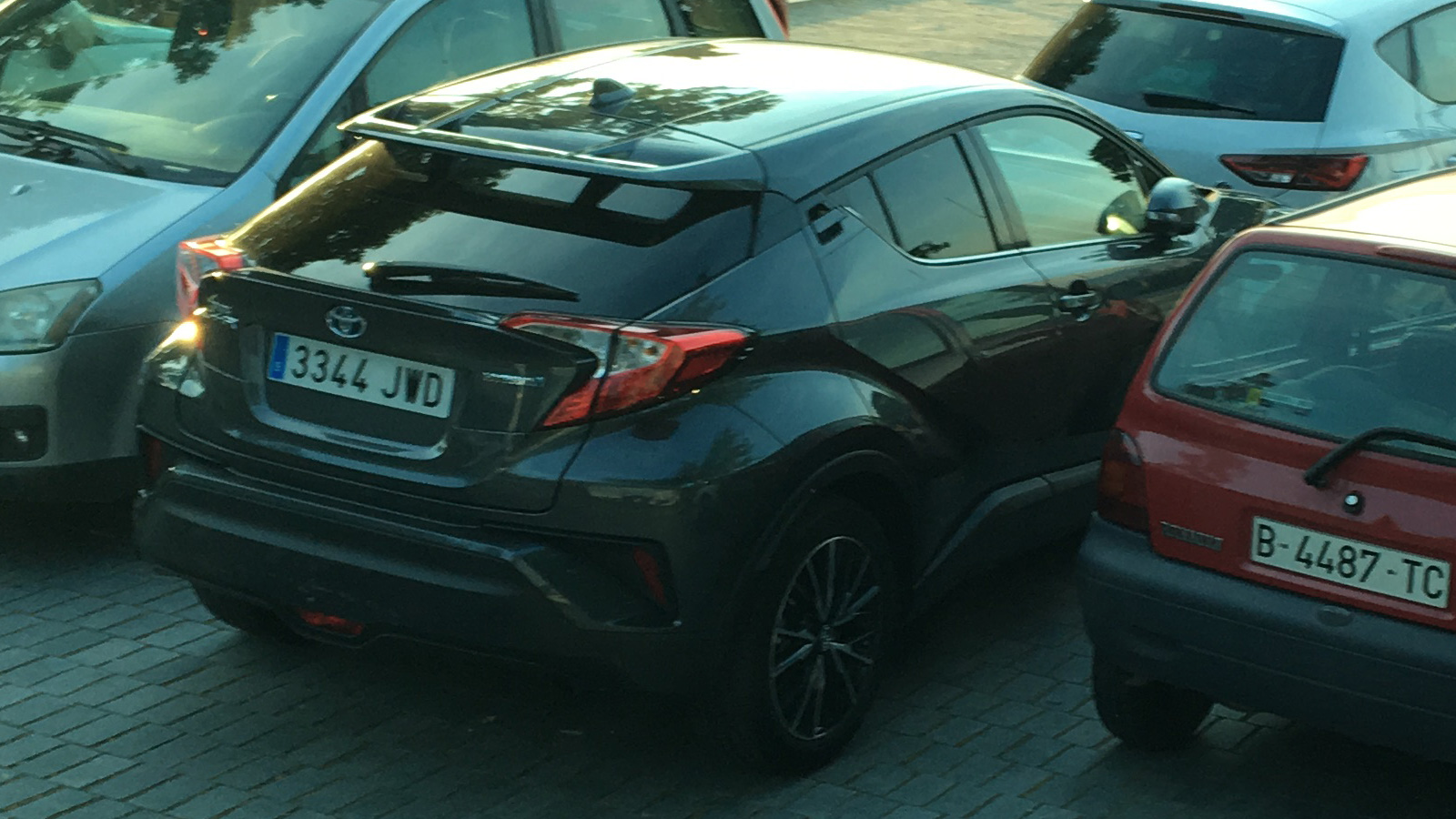 I haven't seen any of these Toyota C-HRs in the U.S. yet, so this was the first one I saw. For a Toyota crossover, it's pretty striking-looking, like the offspring of a hot, noisy union between one of the robots from Pacific Rim and a Hyundai Veloster. 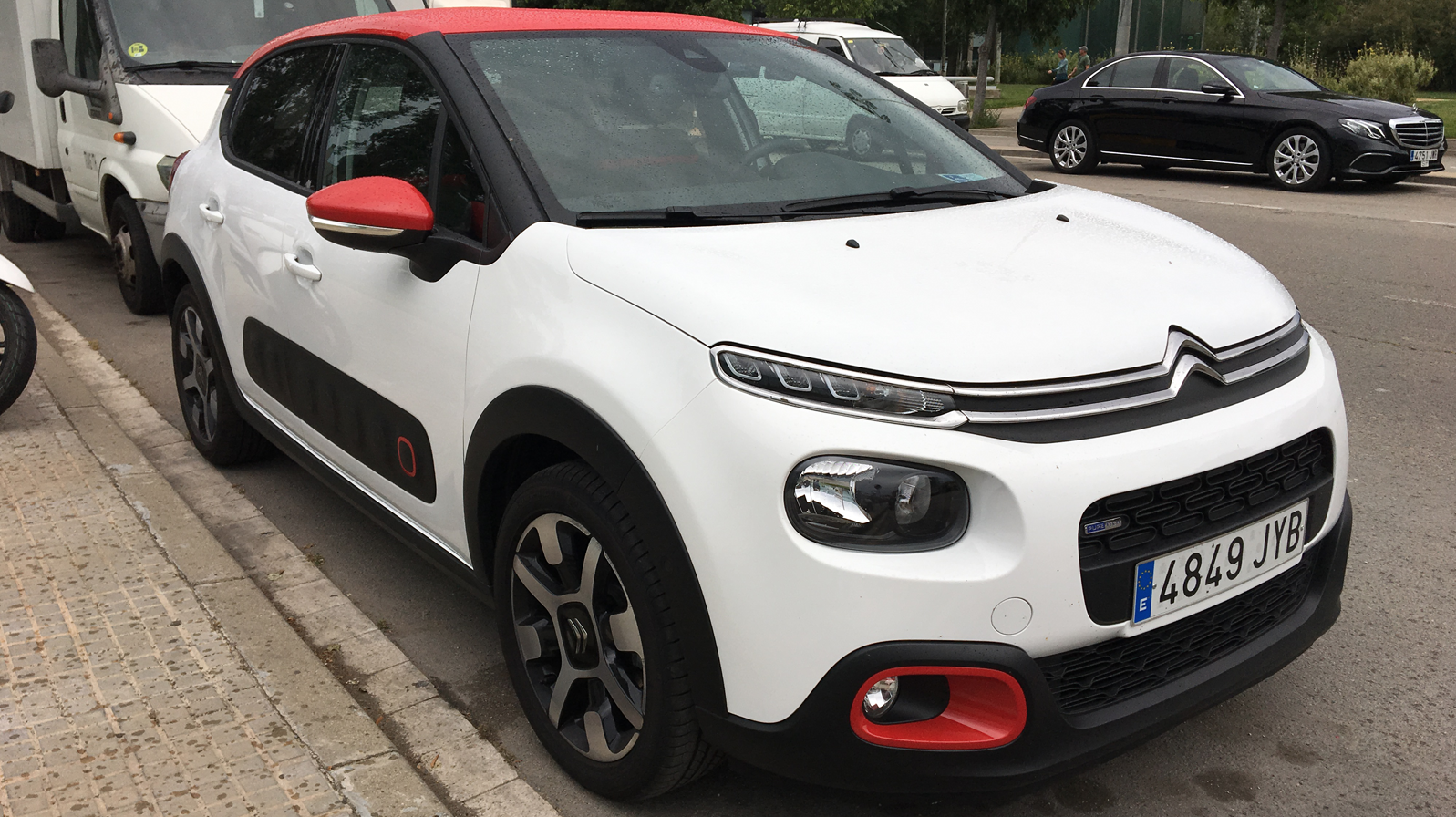 Man, when it comes to the styling of mass-market modern cars, I can't think of anyone that brings it quite like Citroën. I think this C3 is great looking. It's got those pneumatic Airbump things from the Cactus, it's boldly two-tone, the light/dark contrasts are striking and fun — whatever you think of the car, it's absolutely not boring, which is something of a triumph today.

I think Citroën may be the brand I'd most like to see come to America, though I'm not going to suggest any breath-holding. 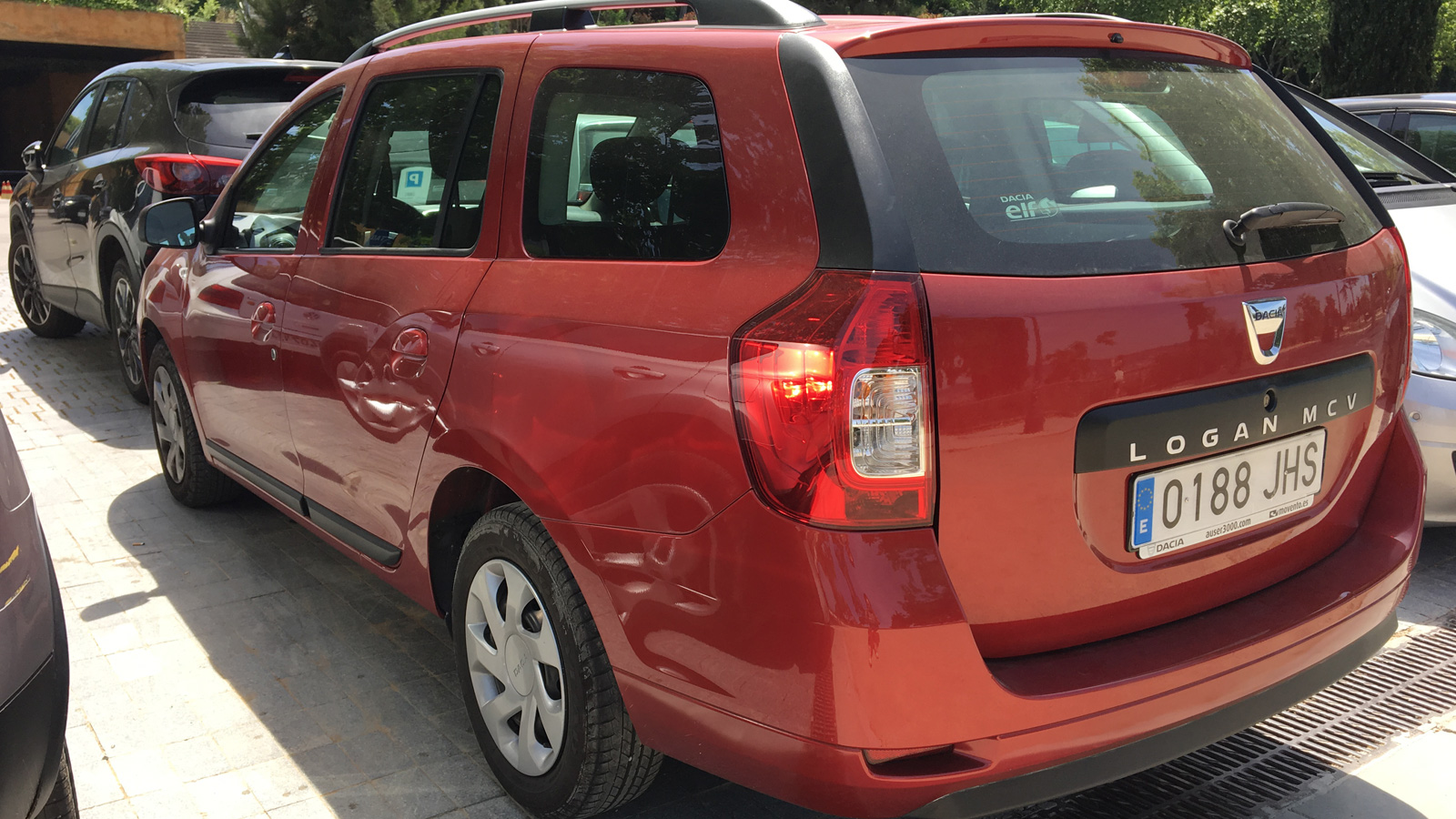 I always like to see Dacias, the cheap, Romain arm of Renault-Nissan. This Logan MCV is a pretty decent-looking wagon, roomy and useful-seeming. It doesn't look or feel like a tinny shitbox, and yet these things sell (in the UK) for about $US9100 ($12,170)! Holy shit, right? You can't even get a base Mitsubishi Mirage or Nissan Versa for that kind of money here! I'm a sucker for these first-gen Renault Twingos. They remind me of some kind of friendly, helpful tortoise that takes you to work and runs errands with you. 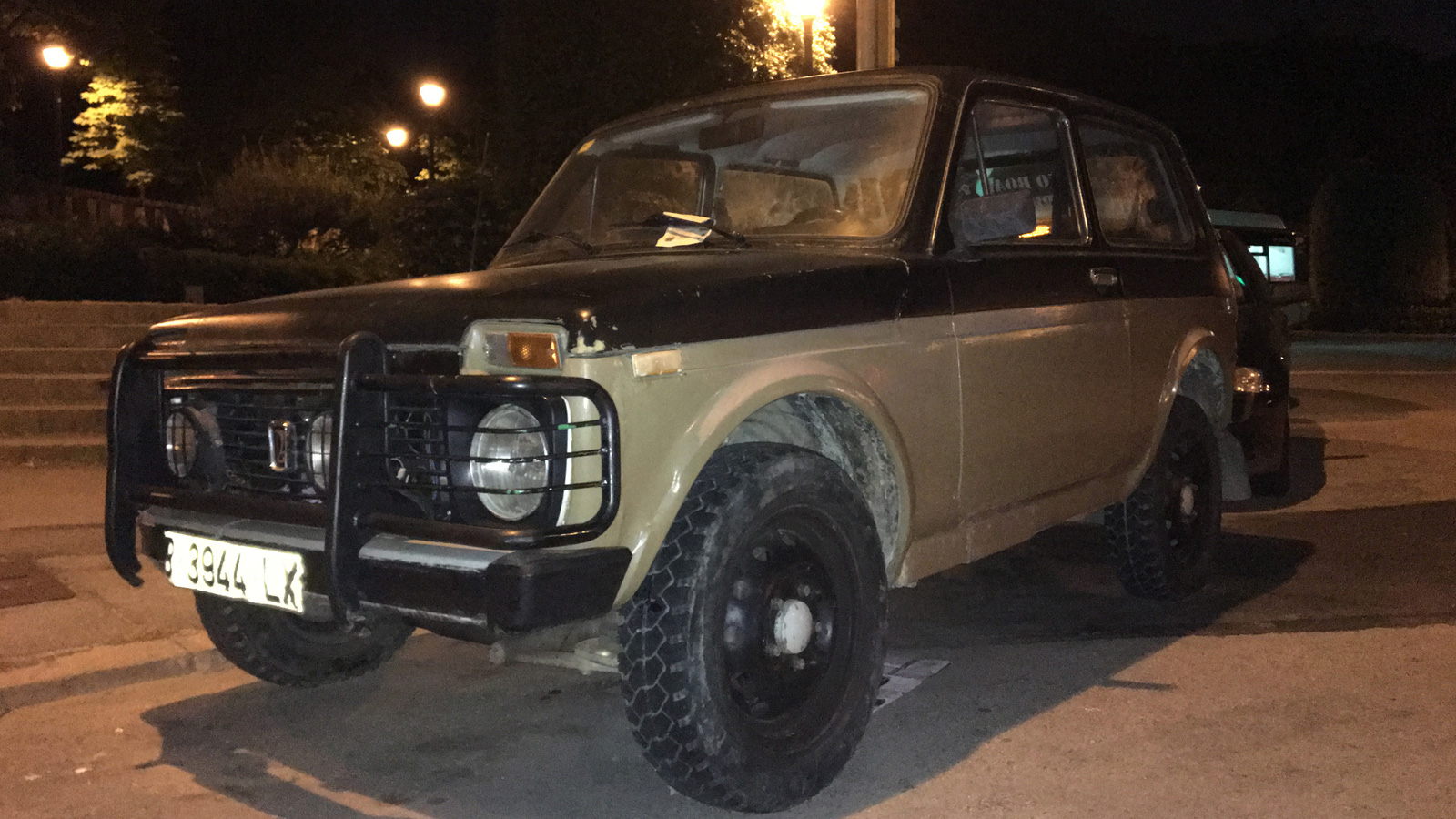 This was a treat! A Lada Niva, resplendent in gold-and-black, sporting a nice, tough face mask. This Niva had at least one ticket on the windshield and didn't seem to move the whole time I was there, so I'm not sure exactly how mobile it is. The feel of the car sort of suggests that maybe the owner is staying indoors until some shit blows over. 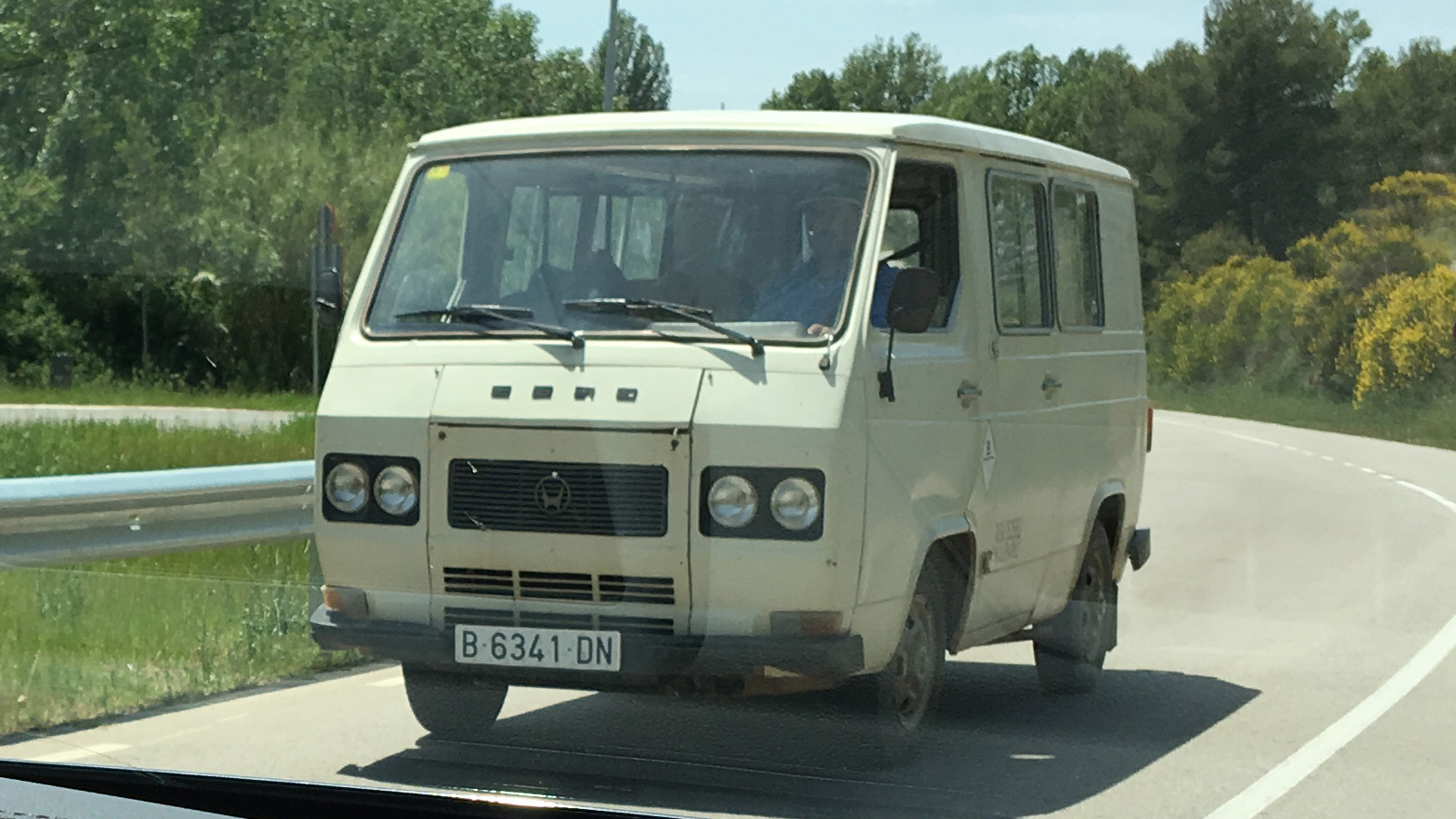 Remember what I was saying about vans? Here's a really remarkable van spotted just outside of the city: it's an Ebro F275. As much as I'd love to, I'm not going to pretend I recognised an Ebro. It took a lot of puzzled research, and eventually it was Raph who figured it out.

Ebro is strange, a wild minestrone of a company that made vans derived from Alfa Romeo, Aisa. SEAT/Siata, Jeep, and other companies, and sold their vans in a dizzying explosion of badge-engineering madness. That van up there, for example, could also have been had as an Alfa Romeo or a Nissan, among others. I'll do something bigger on Ebro soon. 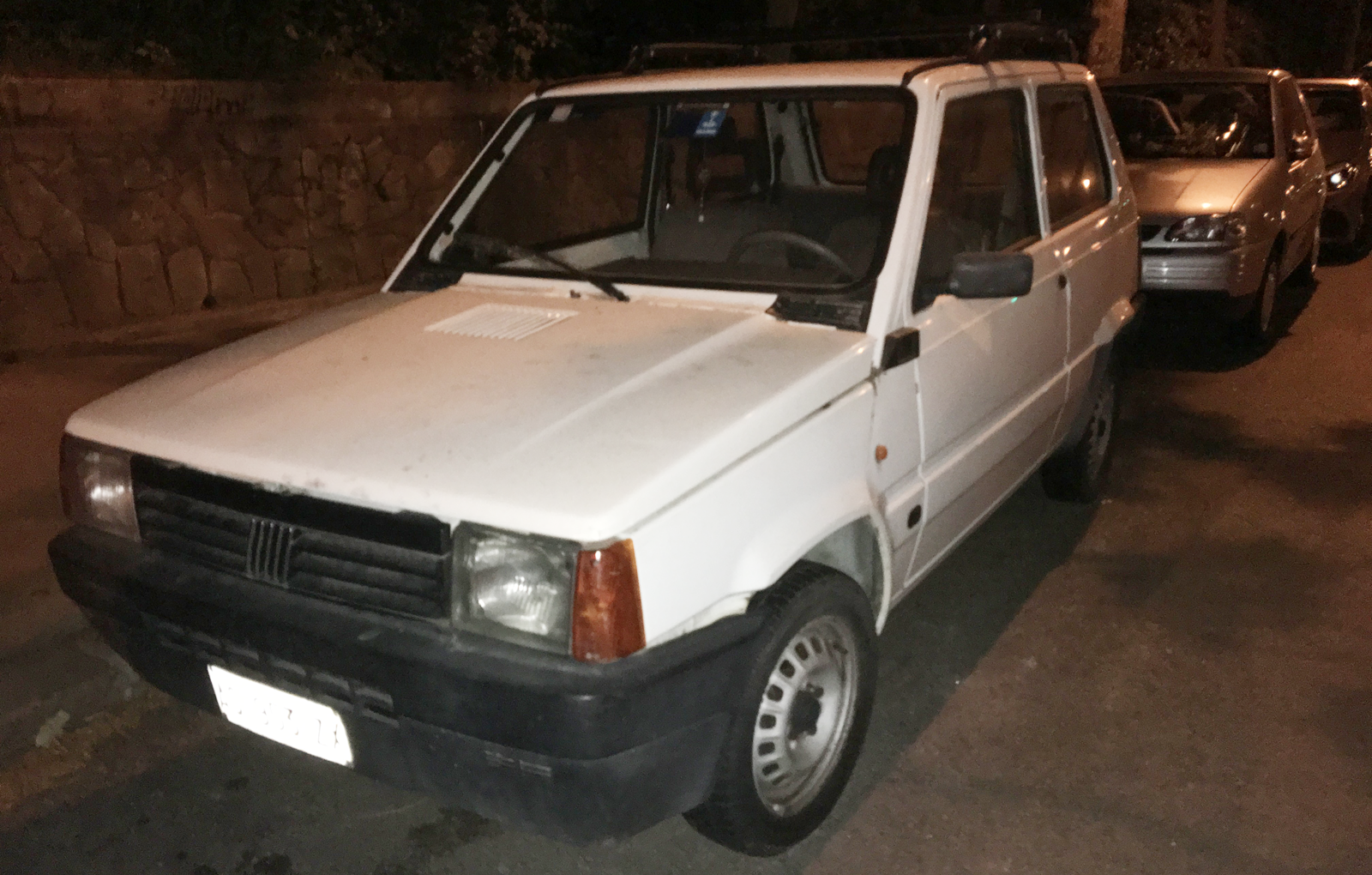 Man, I love the shameless utility of early Fiat Pandas. They're so basic and honest and straightforward. If you had to ask a car to babysit you and your valuables while you tried some weird new kind of psychedelic drug, I think a Fiat Panda would be a great choice. 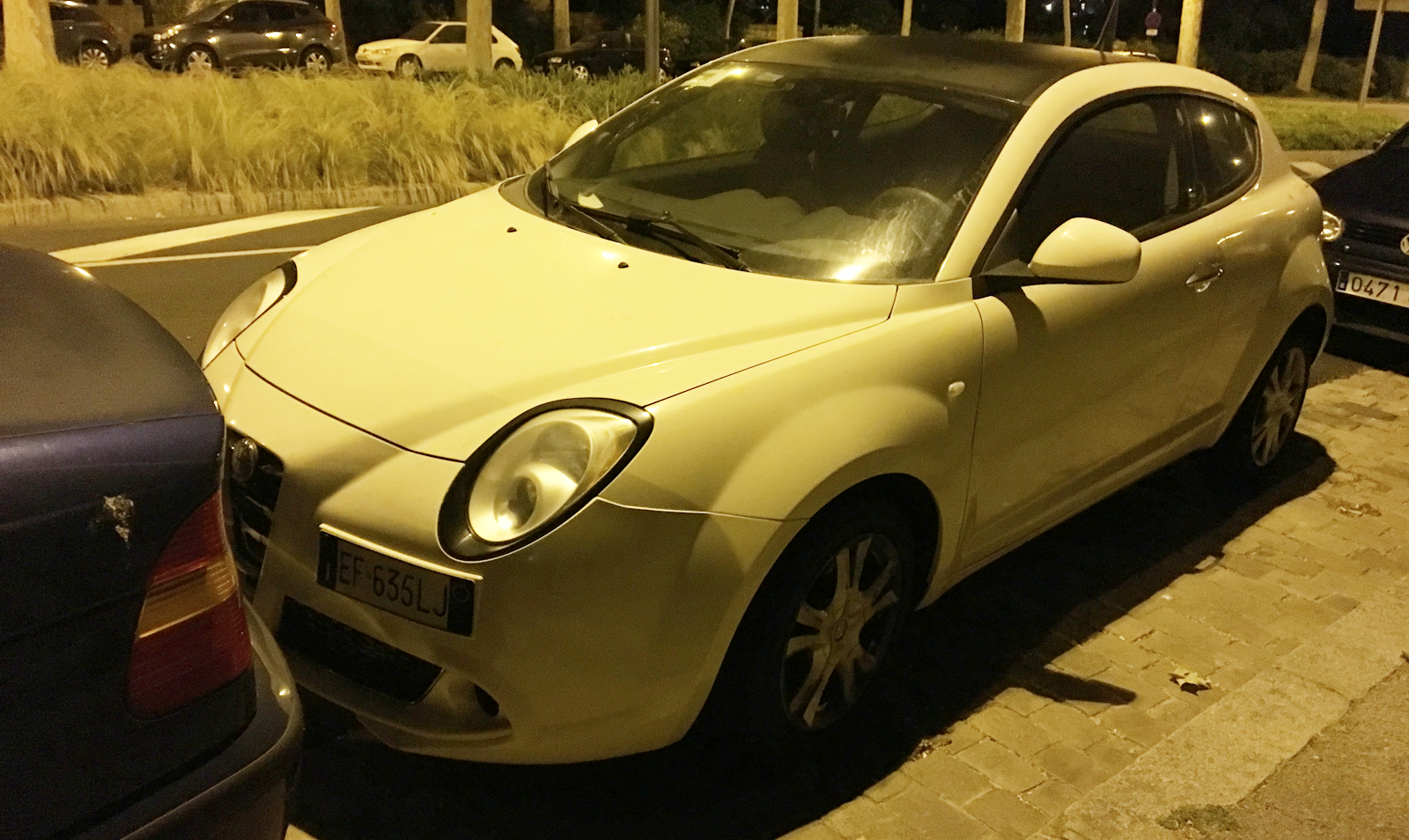 We get very few Alfa Romeos here in America, and I think that's a shame, because they bring a great look and character to even their little hatchback city cars. Why isn't FCA bringing the Mito to America? They could slot it in above the Fiat 500, and have a cool little Mini competitor. It's not like they have anything else in that category, really. 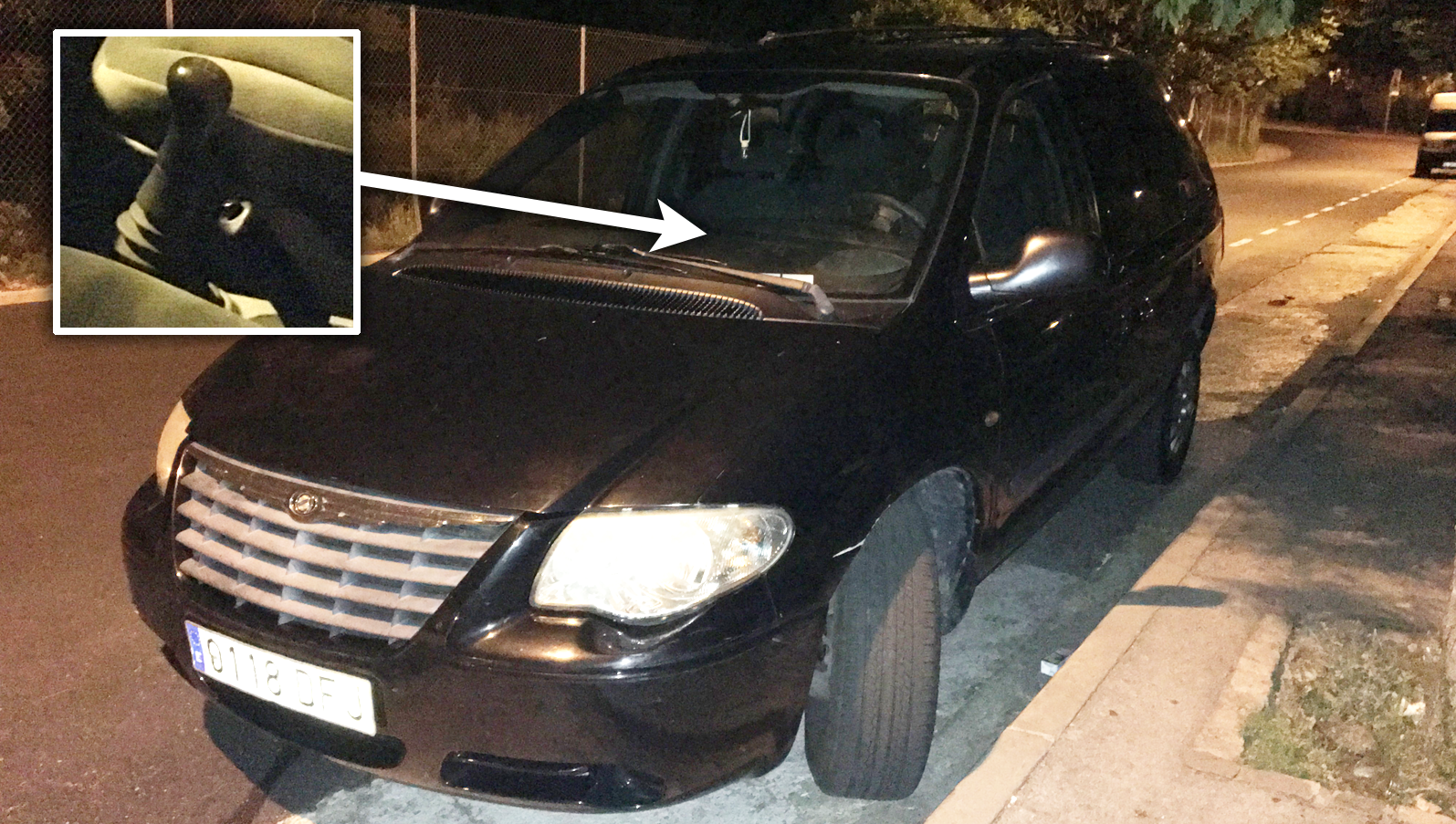 I know you're thinking hey, that's just some boring-arse Chrysler minivan; I can see three of those filled with vape smoke at the gas station on the corner any time I want. What's the big deal?

The big deal is inside, because this Chrysler minivan is a manual. I'm pretty sure I've never seen a manual Town & Country of this era in the U.S. This would be sort of fun to have in America, but I'd want to put tape stripes on it and a huge 5-SPEED MANUAL sticker on the side, like how turbo cars did back in the '80s. 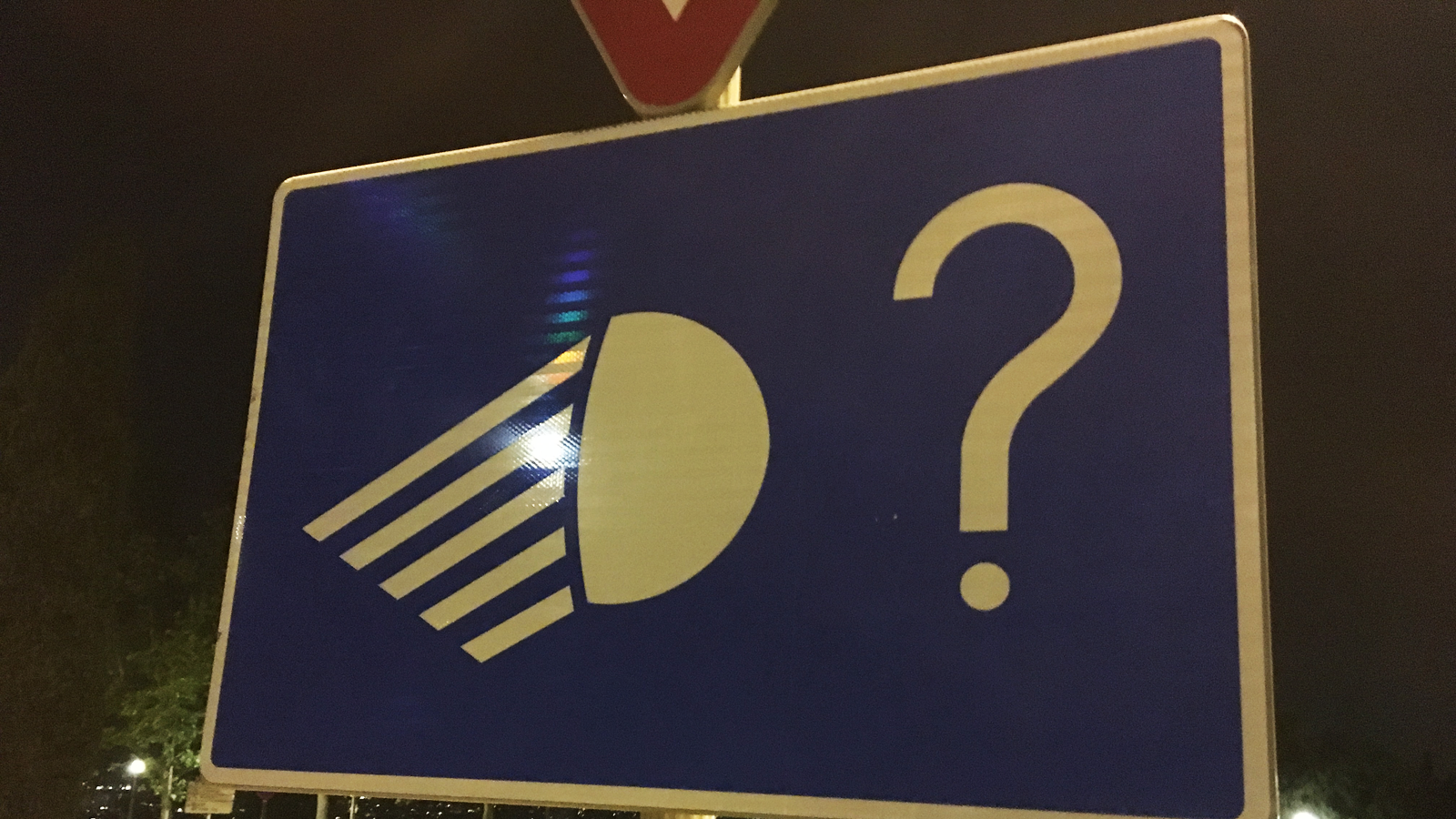 I'm not totally sure what this sign means. Is it asking if your lights are on or off? Or is it just warning you that confused jellyfish are crossing here? 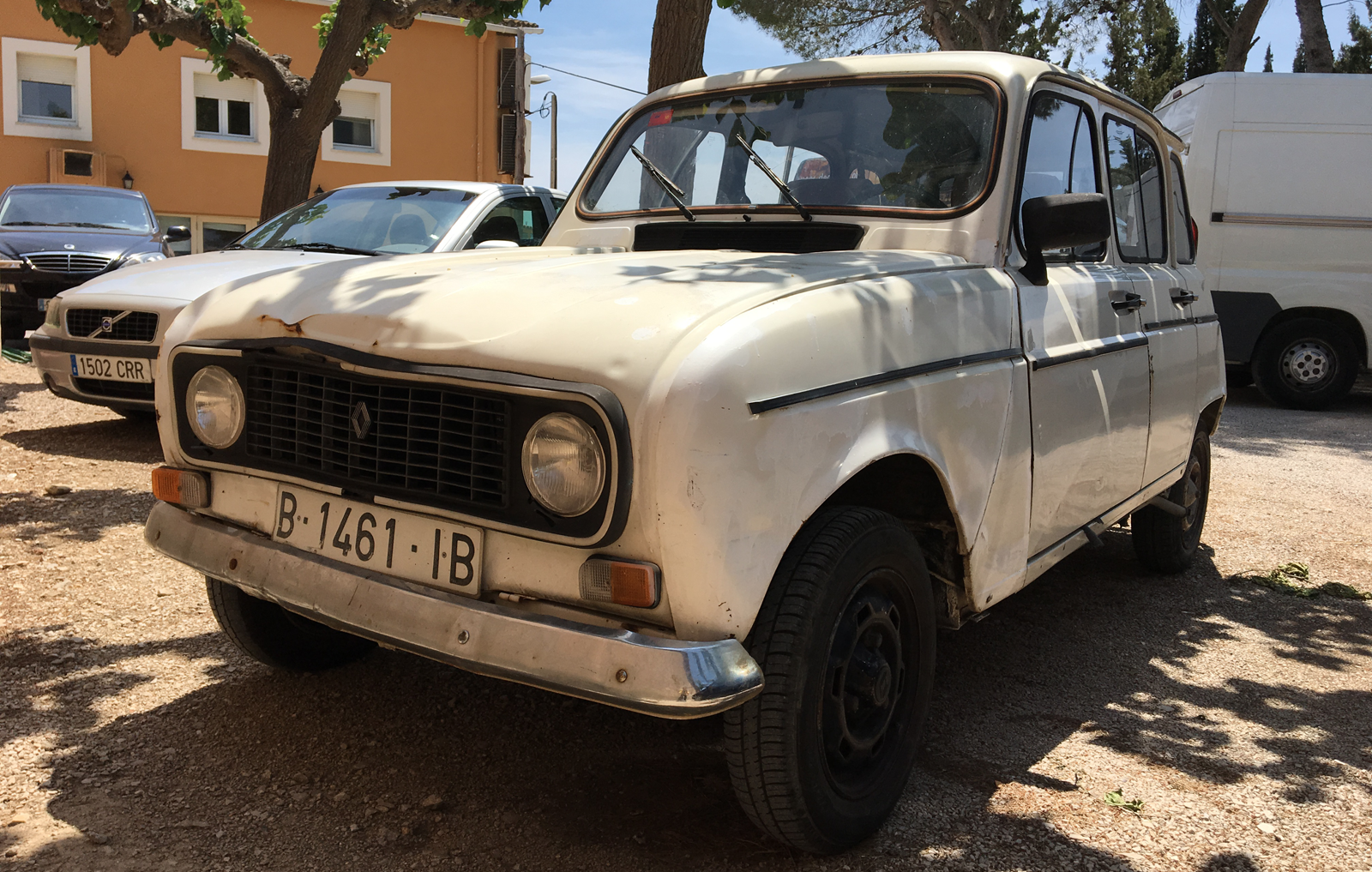 This is one of my favourite cars I saw — a Renault R4. This one I think is from the mid-late '80s, and as you can see, it's unrestored and in regular, non-pampered use. It's such a satisfying, useful design, a flexible little wagon. This one seemed to work at this vinyard, and I like to imagine it laden down with casks of wine and looking all Euro-stereotype charming. 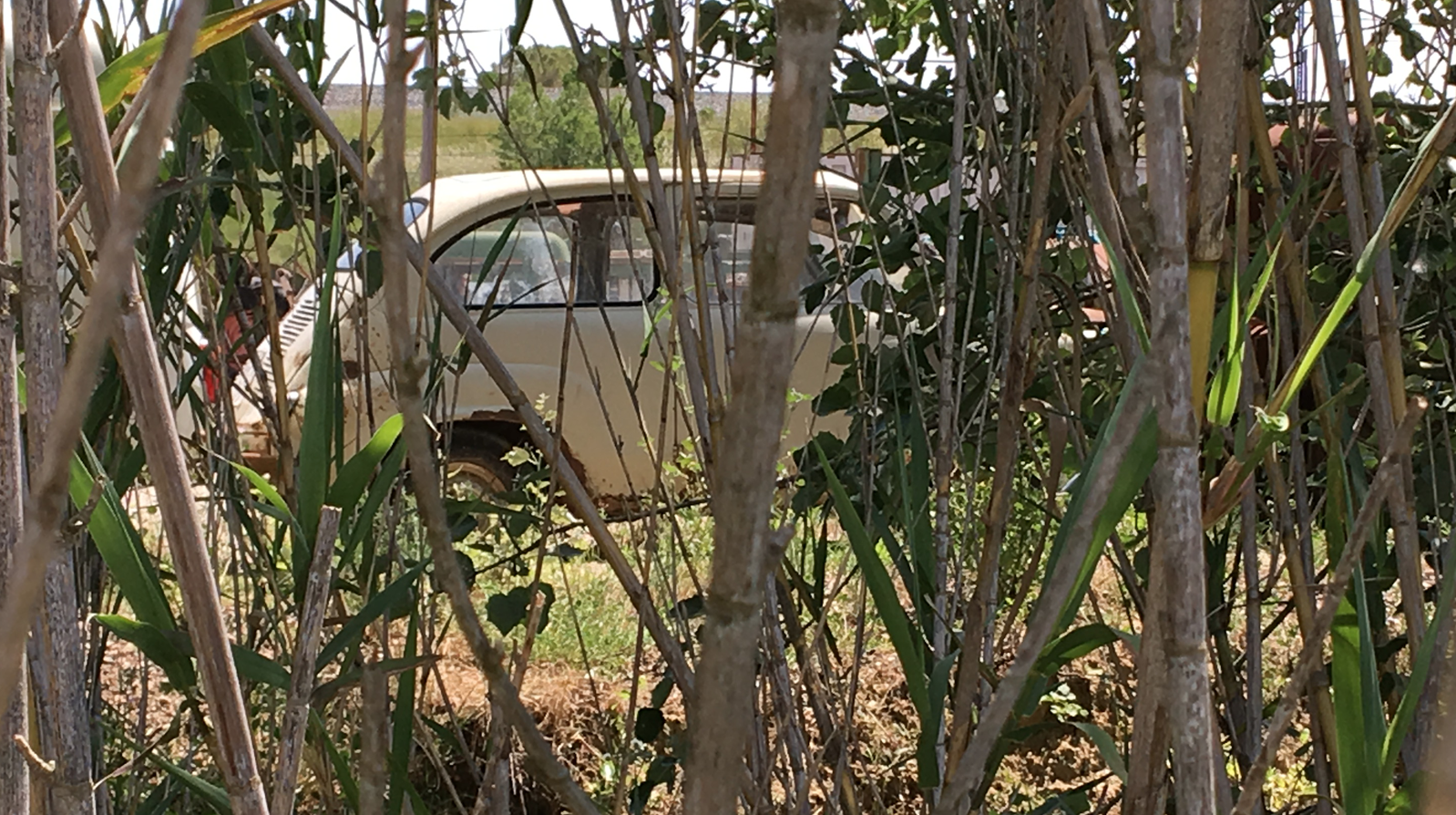 I couldn't get onto this private property to really examine this like I'd have liked to — those dogs were clearly not into me. So I had to settle for taking this peeping-Tomaso shot of what I think is an early SEAT 600. There was also an R4 van there, and some other kind of early Peugeot or something back there. 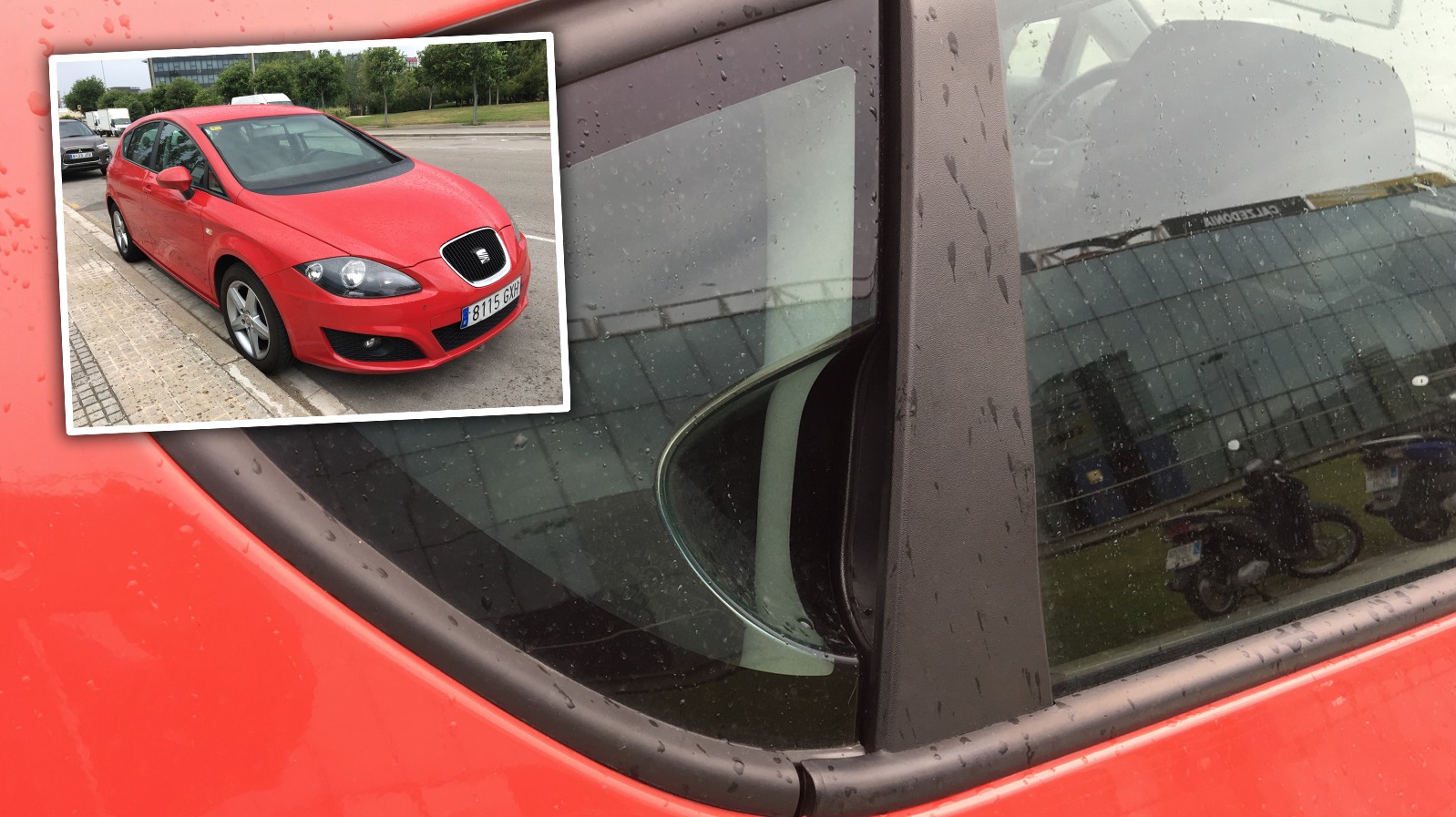 This SEAT Leon has a little design detail that's so freaking cool and clever I can't believe I've never seen it on anything else before: the recess for the door handle is set into the rear quarter window glass. It's so cool! I've never seen any car with glass as dramatically sculpted as that! Why isn't this more of A Thing? 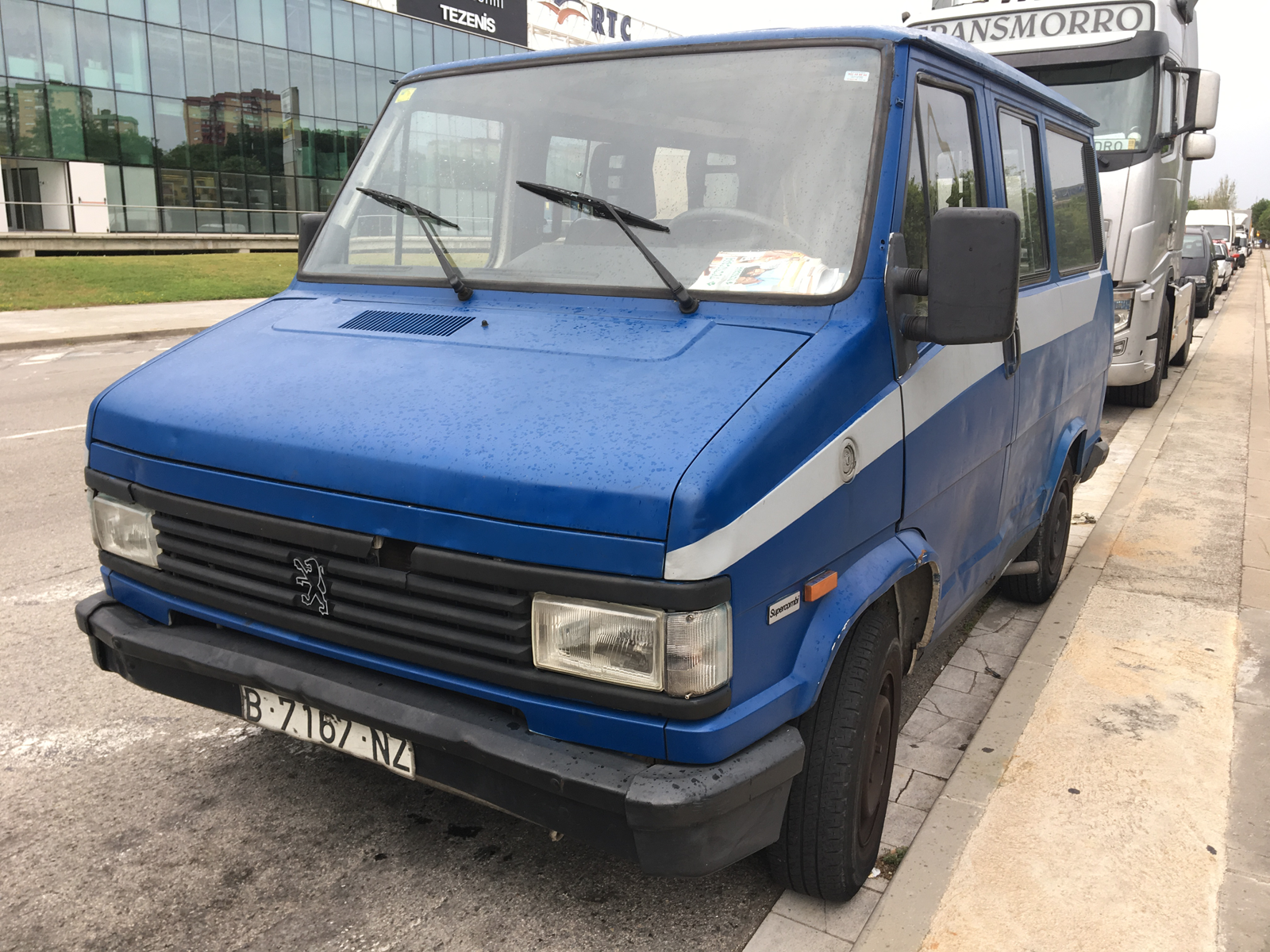 OK, more great vans! This mid-'80s Peugeot J5 van with a nice big side-stripe is right up my van-alley. The proportions are both utilitarian and pleasingly cartoonish all at the same time. It also had an IKEA rug in the back and looked like it does a lot of service as a sort of mobile lounge.

These same vans were also sold as Alfa Romeos, Citroëns, Fiats, Talbots, and Zastavas, making them badge-engineering heroes on top of everything else. 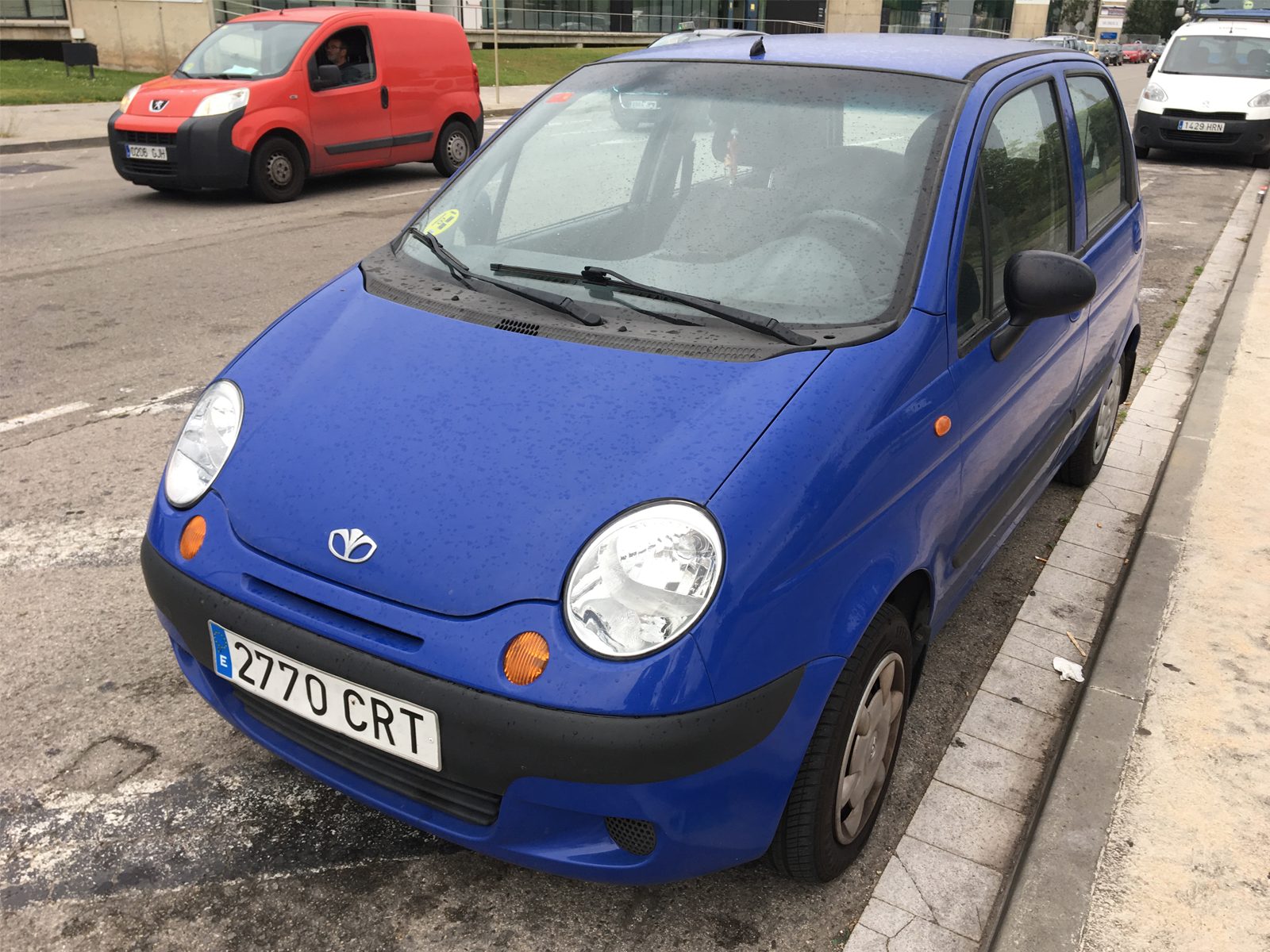 The Daewoo Matiz isn't a particularly good car (we had later ones here as the Chevy Aveo) but that face is so damn friendly I had to take a picture. 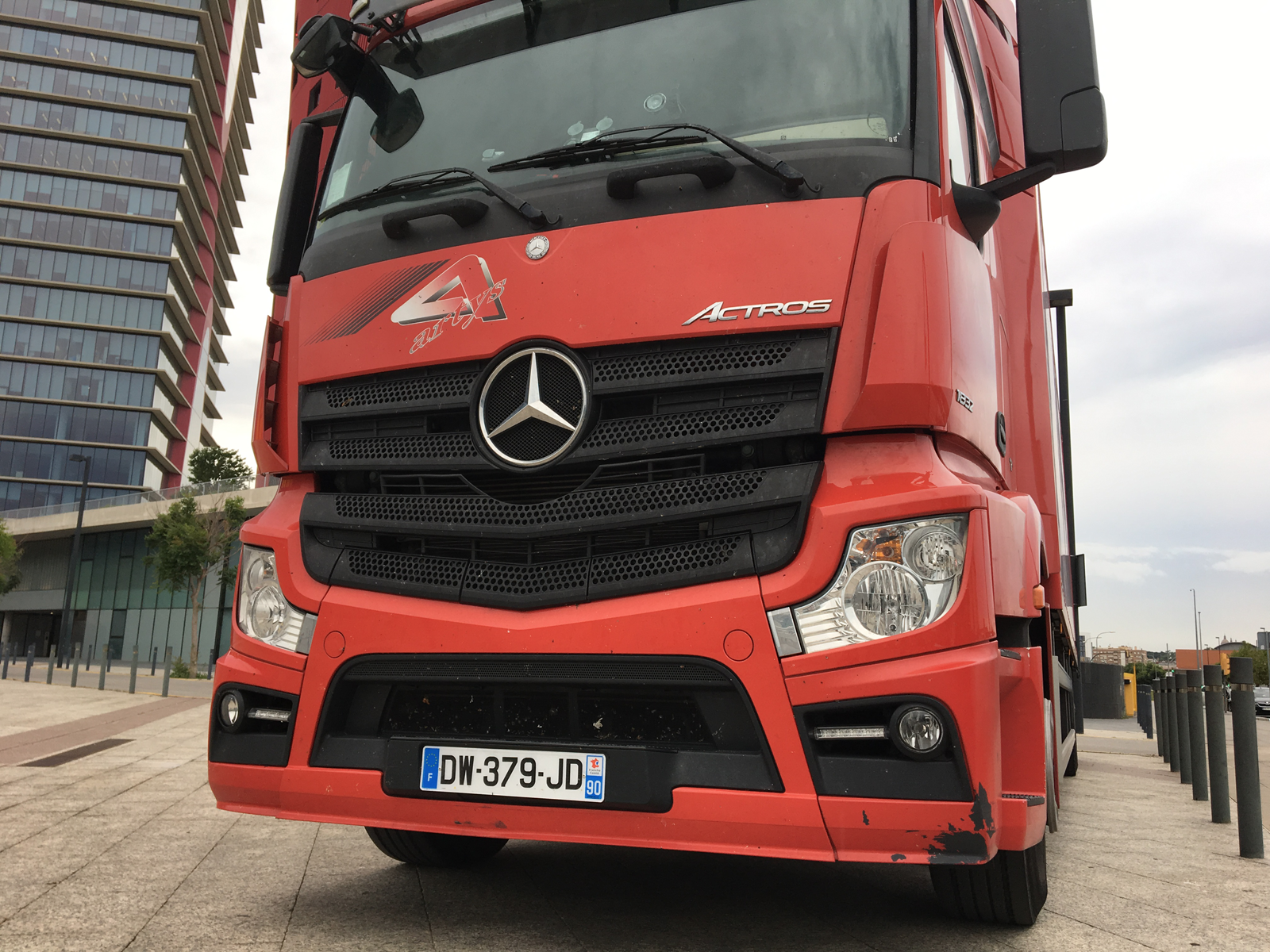 At the other end of the car-face spectrum is this Mercedes Actros truck, which looks like a livid, red-faced Deceptacon that wants me dead, right fucking now. I swear if I woke up on the street with one of those things right in front of me, I'd probably crap my pants.

I mean, other than the usual pants-crapping that would come from waking up right in front of any huge truck. 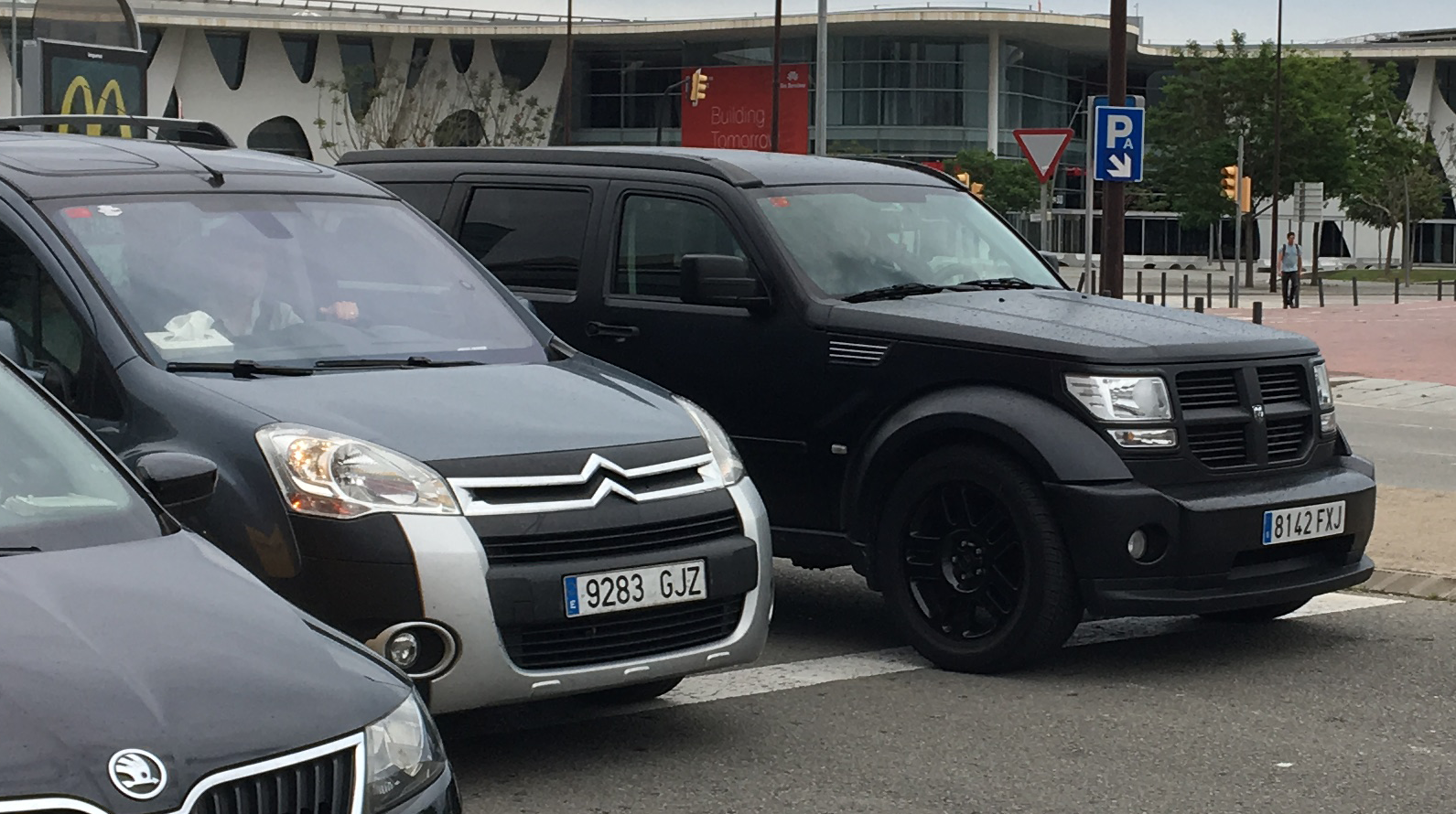 I just want to point out that someone in Europe purchased a Darth Vader-spec-looking Dodge Nitro. A Nitro. The uglier, less-capable sibling of a Jeep Liberty.

I guess people in Spain who've been hit by lightning in the brains have to buy cars, too. 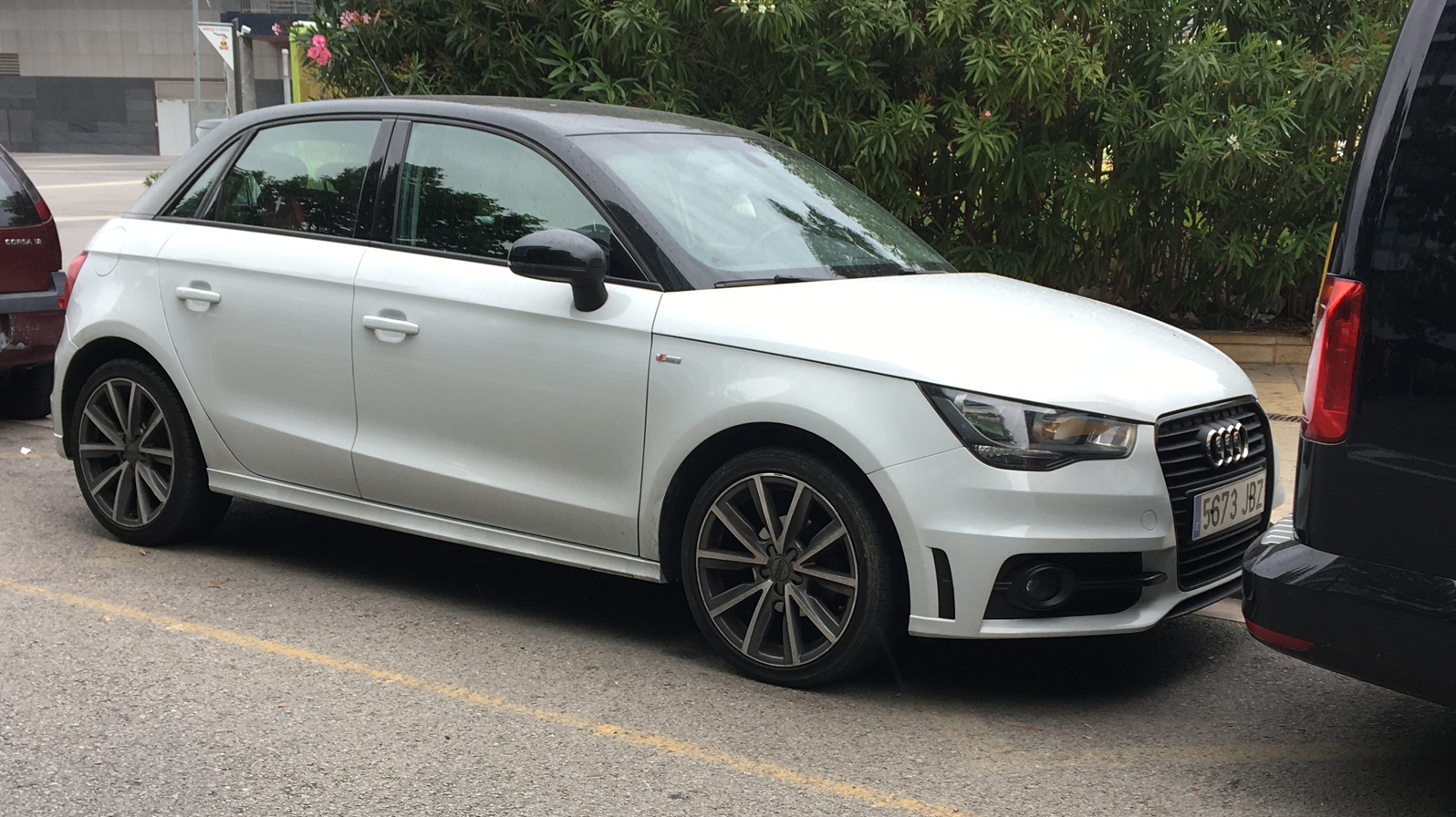 These Audi A1s are handsome little cars. I like their use of two-tone, and the way the front hood line defines the upper edge of the headlamps. The truth, though, is that at first I thought this was one of the Audis where the hood doesn't really open, but then I realised that was the A2. Sorry. 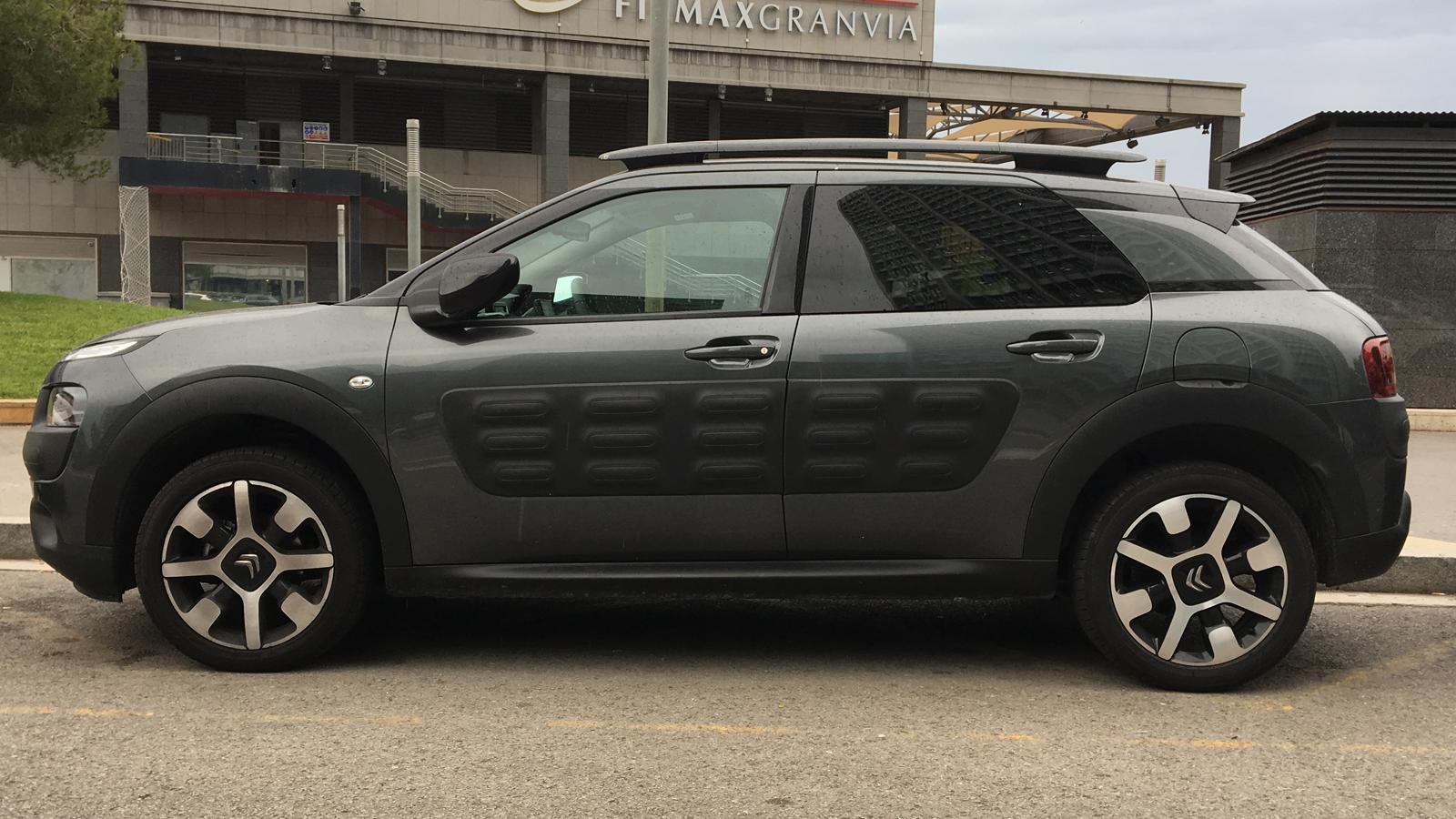 A Citroën Cactus! I saw so many of these in bright colours like yellow and red, but the one I was able to photograph was this grey one, which doesn't show off the unusual look of the car as much.

Even in grey, I still really like these. I still think these could sell in the U.S. 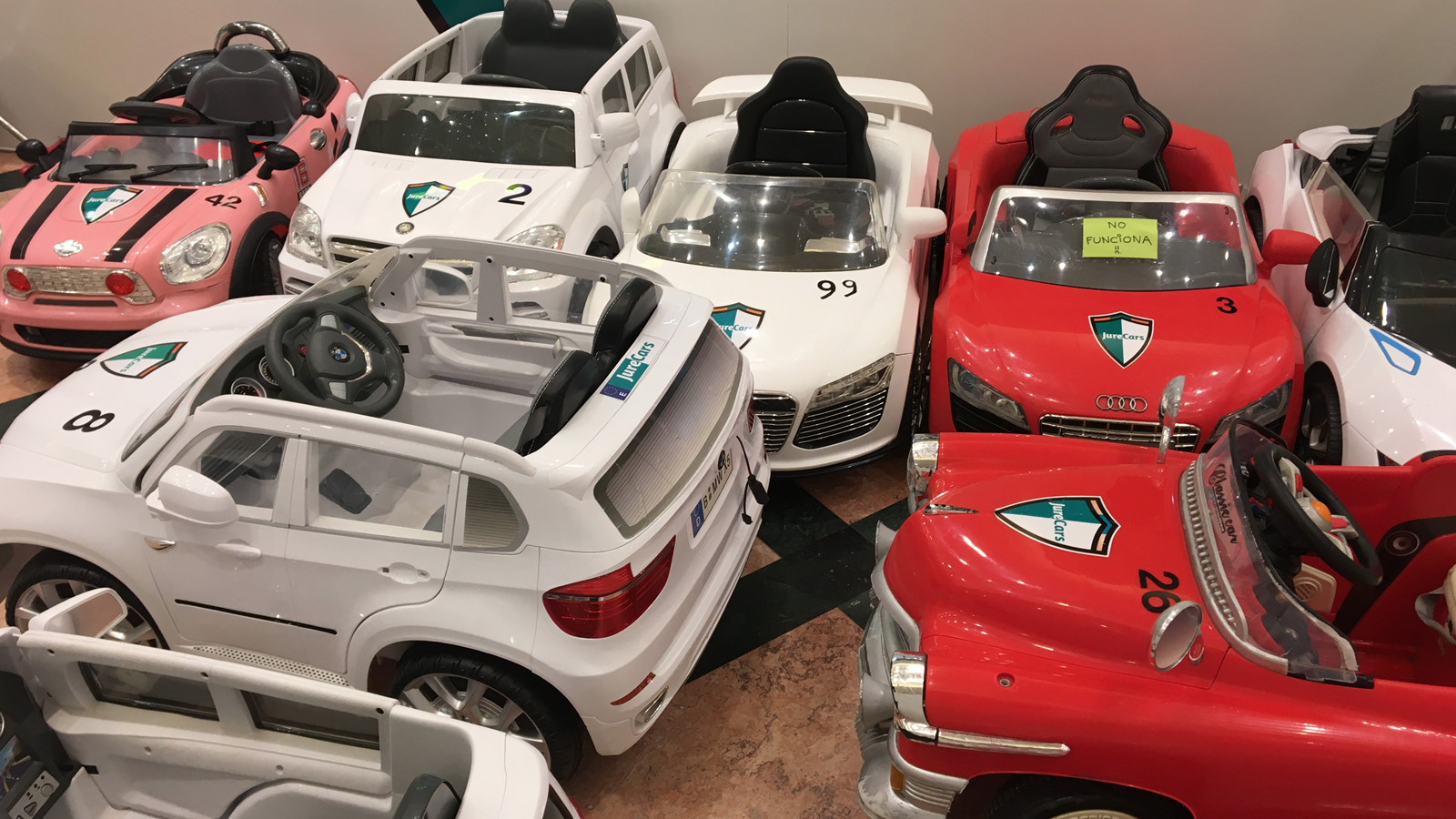 So, it seems some malls in Spain have these little electric cars that you can rent for your kids, who can then tool around a mall in a tiny BMW or Mini or Audi or Bel Air! It's fantastic. I hated malls as a kid (and mostly still do) but something like this would have made them vastly more fun. 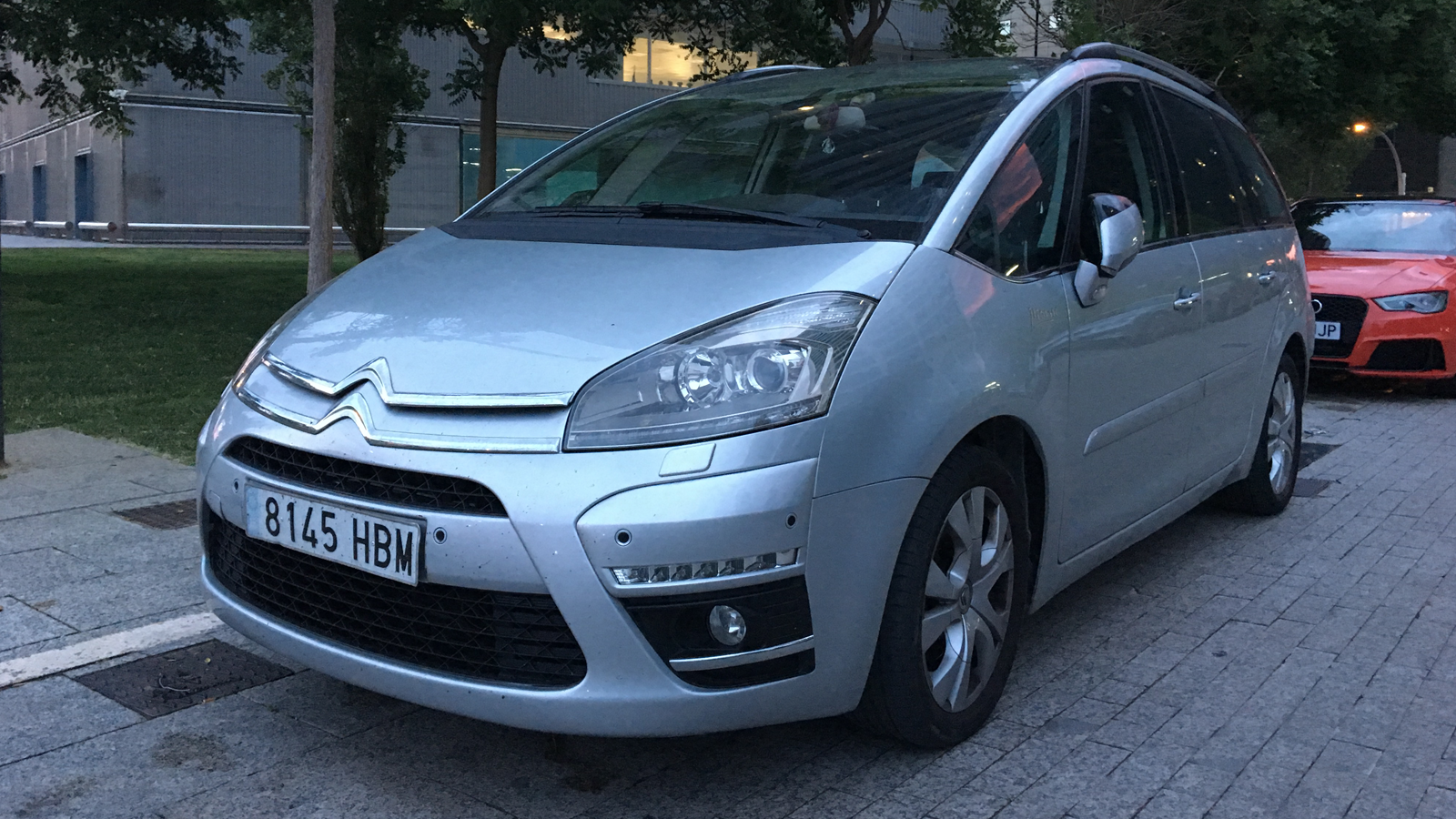 Again with the Citroën, again with the vans. I know, I know. But I think those Gallic types managed to make a very attractive modern minivan here, which isn't easy. 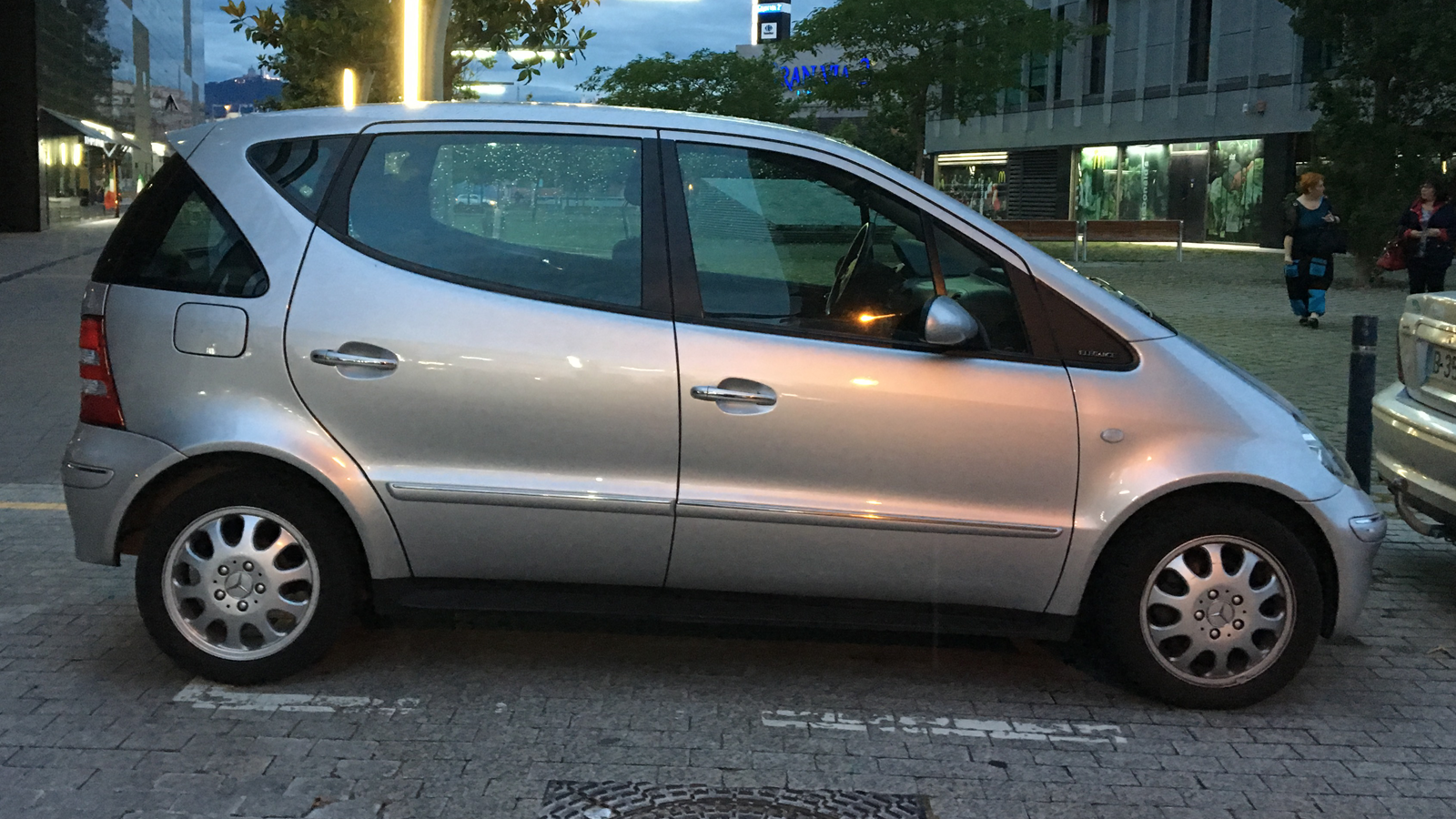 It's possible I have some brain problems because whenever I think about recent-ish Mercedes-Benzes I'd like to own, the A-Class is always at the top of my list.

There's something so spaceshippy and clever about these wedgy one-box things. Also, I like the Z-shaped D-pillar, even if I think it looks terrible on those Ssang-Yong Rodiuses. I don't even mind that these failed the Moose Test because I hardly ever hang out with moose, anyway. I think this book has something to do with midlife crises, or something like that. I don't really know. But I do like that it has a Rover, a Mustang, something I'm not totally sure of (Hillman Avenger?), an Impala, and a Capri on the cover. 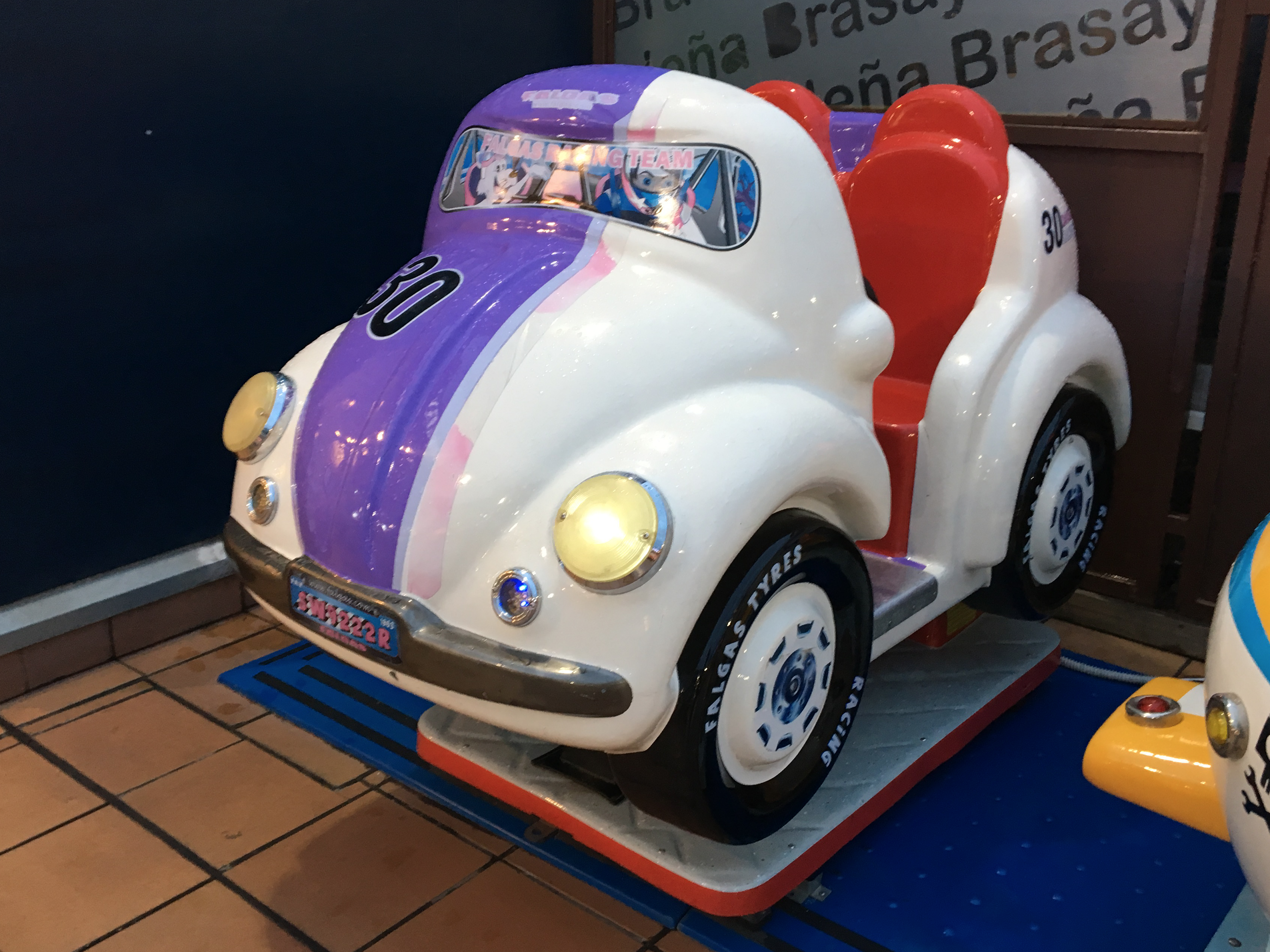 Sadly, this was the only vintage Beetle I saw in Barcelona. At least it was well-maintained. 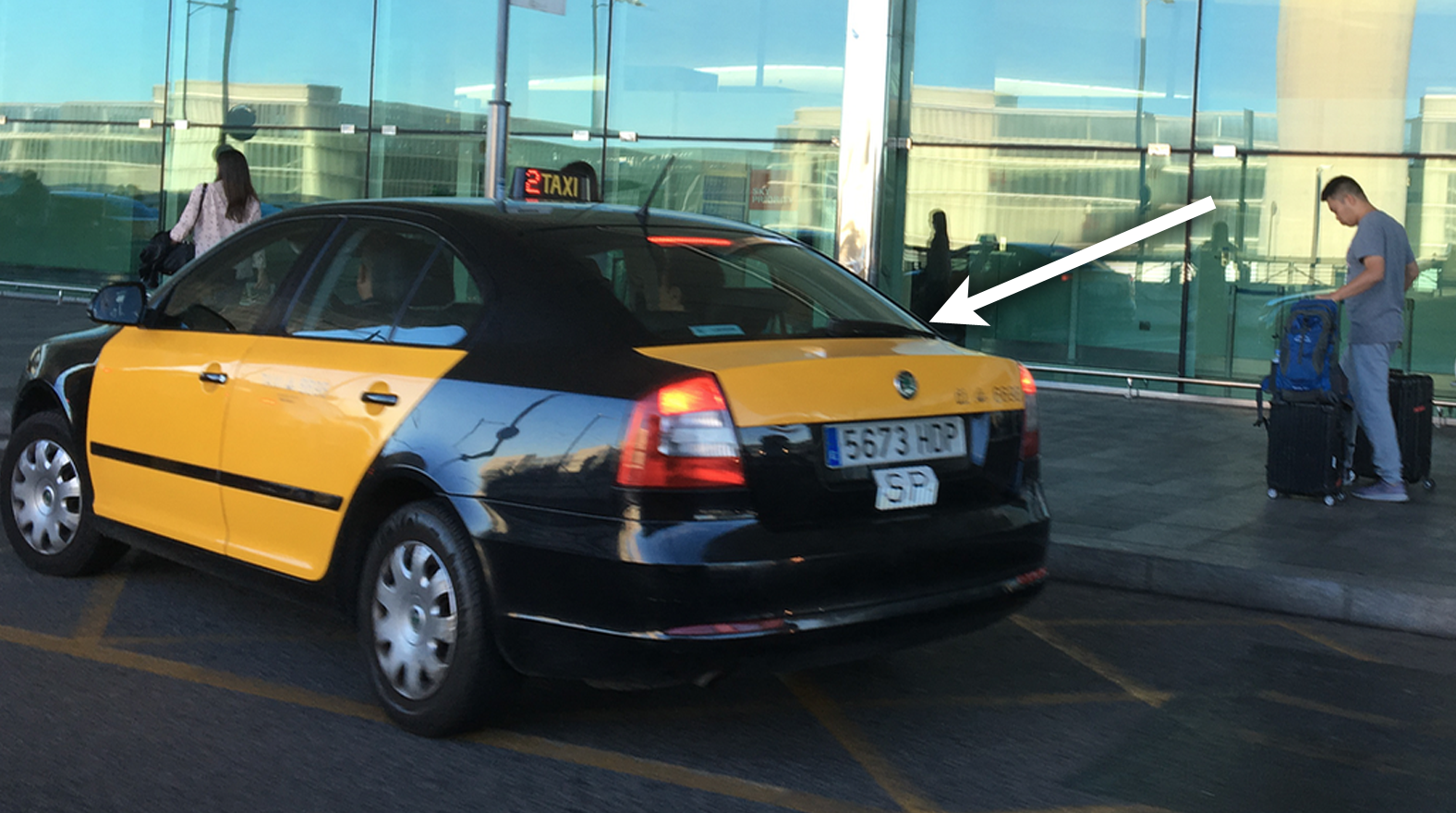 That's a crappy photo, but I just wanted to point out that these Skoda Octavia cabs had rear wipers. On a sedan, with a trunk. That's almost unheard of, and the more I think about it, the less I understand why. Why do we only have rear wipers on cars with hatchbacks, or the occasional fastback sportscar, like a Porsche 911? I'll look into that.

I was impressed with the overall car-scape of Barcelona; it managed to be reasonably eclectic and not boring, which is more than I can say for other places I've been this year.