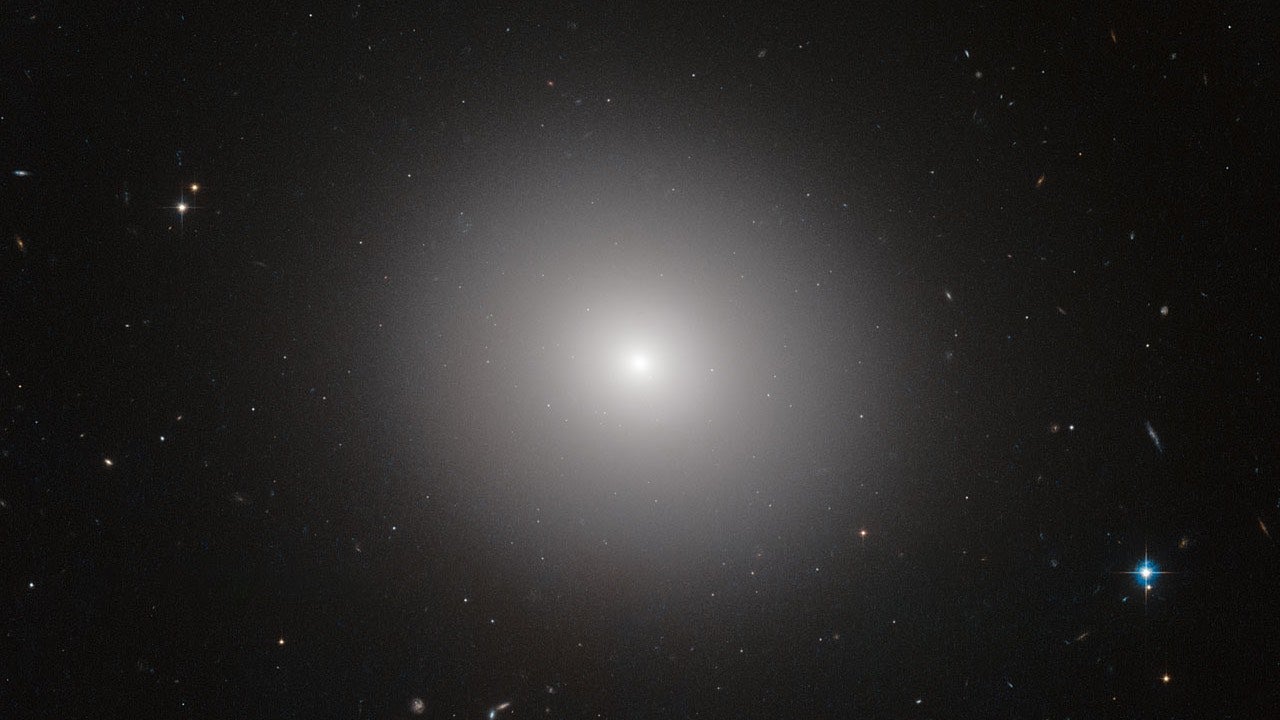 Only a billion or so years after the universe formed, a galaxy far more massive than our own blazed into existence. Just half a billion years later — less than the amount of time it took life to emerge and evolve into humans on Earth — the galaxy was a dead disc, no longer forming stars.


Elliptical galaxy IC 2006. Not the galaxy that the researchers are talking about, but you get the idea (Image: ESA/Hubble & NASA/Flickr)

This is incredibly strange.

An international team of astronomers spotted the ZF-COSMOS-20115 galaxy and similar objects, using the Keck Telescope on Mauna Kea in Hawaii. Our own Milky Way galaxy is still pinwheeling and forming stars after 13 or so billion years, while this distant blob seems to have lived a full life in a fraction of the time. Our theories aren’t ready for a complete shakeup, but our current understanding of galaxy formation doesn’t explain how this strange mass of stuff could have formed.

“This is the earliest galaxy that is massive and quiescent — no current star formation,” the paper’s first author Karl Glazebrook from Swinburne University of Technology in Australia told Gizmodo. “This galaxy is five times the mass of the Milky Way but about 12 times smaller… No one quite believed it really existed because it’s a challenge to formation ideas.”

Glazebrook and company made their observations of the galaxy’s spectral lines (the wavelengths of the light) to determine its age. As space itself expands, it causes light’s wavelength to get longer, so the galaxy looks much redder than it really is, kind of like how an ambulance siren pitch gets lower as the space between you and the ambulance increases. By measuring this “redshift”, scientists can determine how long the object has been around since the Big Bang — in this case, it’s 1.65 billion years, so we’re looking at the galaxy the way that it was 12 billion years ago.

(For those interested, that doesn’t mean the galaxy is 12 billion light years away. It’s actually much further, since the space between has expanded).

So, with this blob’s age calculated, scientists were stuck with a conundrum: How the heck did this small-but-massive thing form and die so quickly? The answer: ¯\_(ツ)_/¯

It’s important to note, though, that this observation alone isn’t a new thing, said Reinhard Genzel, a fellow distant galaxy hunter at the Max Planck Institute for Extraterrestrial Physics in Germany. “Even within a few hundred million light years, you can see galaxies collide. Once they collide, the gas is driven out very efficiently, they are compressed to this high density elliptical galaxy, and what’s left is a dead system.”

But, here’s the kicker: Glazebrook’s group actually found several of these galaxies, so although these cosmic corpses are still fairly rare, it’s unlikely collisions alone produced them. “The major merger explanation is not very likely,” though we can’t completely rule it out, said Genzel. Still, “This is a rather atypical way of making that transition so fast and quickly from a highly star-bursting system to a dead system. That’s not what anyone expected.” All in all, Genzel was impressed with Glazebrook’s team’s “really beautiful” dataset.

And if these galaxies were around back then, where are they now? There are elliptical galaxies in the universe today, so it’s possible that ones like ZF-COSMOS-20115 are now the chocolatey centres of other far more massive galaxies, but we don’t know for sure.

As for what’s next with Glazebrook and his team’s data, they will keep making observations both with Keck and soon with the James Webb Space Telescope, NASA’s slick new Earth-orbiting Hubble successor. Then, we’ve gotta figure these weird things out, said Glazebrook.

“We have to find a way in [our] theory to make these objects.”