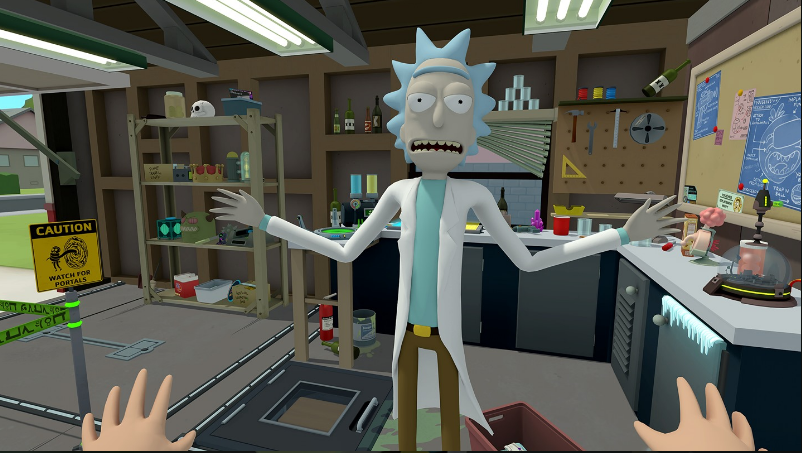 Growing up, one of my favourite CD-ROM games was called The Simpsons: Virtual Springfield. As games go, it wasn’t that advanced, but it let me take a virtual, interactive tour through my favourite television show. The game had in-jokes from the show, voices from the cast, and perfect attention to detail. It was awesome.

I was brought back to that sense of whimsy when playing Rick and Morty: Virtual Rick-ality, which is available today for $46.99 on the Oculus Rift and $US30 ($40) on the HTC Vive. I spent about half an hour playing the finished version of the game at a demo last week, and I have to say, this is some of the most of fun I’ve ever had in VR.

The game, built by Owlchemy Labs, the people behind Job Simulator, and Adult Swim Games, is a testament to the right way to make a VR game and the right way to use branded intellectual property. It’s also a blast. I came back from the office after playing the game more excitable than I’ve been in weeks. It was just that cool. 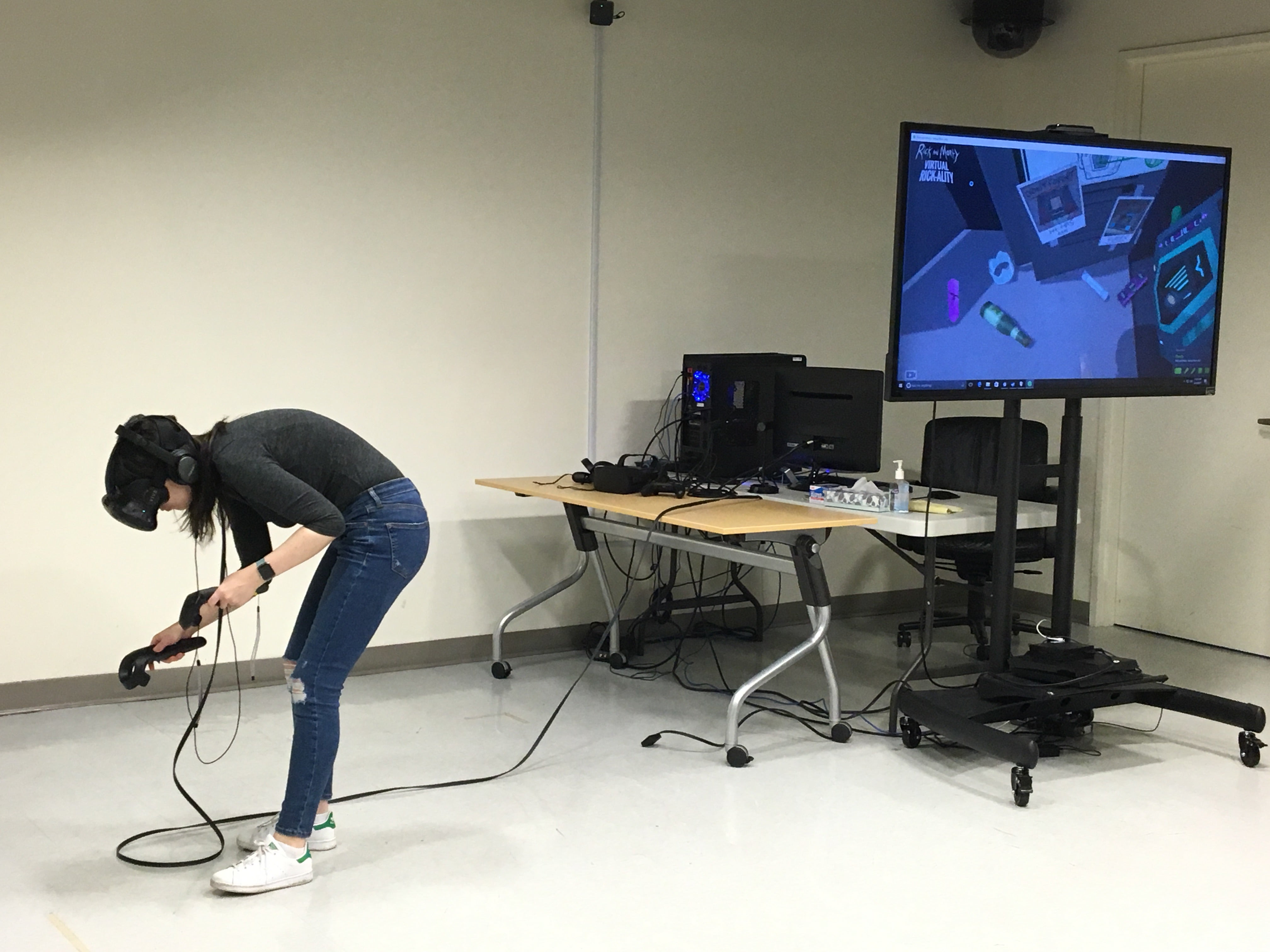 The author, desperately trying to pick up objects while playing Rick and Morty: Virtual Rick-ality

In the game, you live out life as a Morty clone, and your mission is to do crappy work for Rick. The entire experience looks and feels like an episode of Rick and Morty, replete with voice work from Justin Roiland, and references to the universe littered throughout the game.

The team at Owlchemy told me that at the highest level, they were inspired by old school adventure games, but that specific elements in the game were influenced by games like Space Team and Bop-It! That definitely came through in my time in Rick-ality.

The game uses room-scale on the Vive or the Oculus to great effect. I found myself moving around the large demo space quite a bit. Owlchemy told me the game was designed to work with room-scale spaces of all sizes. Still, as with most VR games, the more room you have to move around, the better the experience will be.

You can explore the world of Rick and Morty in the game, but there are tasks to accomplish and puzzles to solve too. At the start of the game, when I found myself a Morty clone, I was tasked with doing Rick’s laundry. This opens up a storyline that ended up requiring me to do silly chores, like collecting a package without actually leaving the garage.

Early in the game, Rick gives you a watch, which ends up serving as sort of a guide to figure out the next task to accomplish or the next puzzle to solve. But the game doesn’t rush you. If you want to spend a ton of time exploring a portal (as I did), you totally can.

The game doesn’t have specific save states, which is an interesting design decision. Instead, there are certain content breakpoints that you unlock when you reach a certain level. At the start of the game, you face a television set and are tasked with using a DVD to bring yourself into the world. As you play through the game, you unlock more content, which makes more DVDs show up. 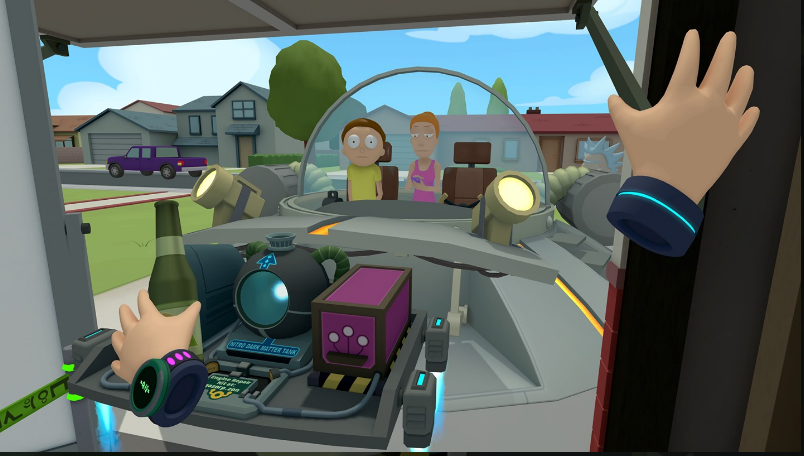 The decision to forego specific save states and go to these unlock points instead was made because the team at Owlchemy and Adult Swim Games think that this will be a game people will want to show off to their friends. And instead of risking messing up someone else’s save state, a new player can just start off the experience with the first DVD disc.

The nice thing about having these breakpoints is that if I wanted to revisit a certain section of the game, I could just go to that place and then roam around and explore the universe.

The partnership between Owlchemy and Adult Swim came about organically. Justin Roiland is a big fan of VR and was a big fan of Job Simulator. At the same time, Jeff Olsen, VP of Adult Swim Games, said that Turner (Adult Swim’s parent company) is very interested in VR. This turned out to be the right property to first test the VR waters.

The Owlchemy team said they had “total autonomy” from Adult Swim when designing the game. They created the objects, the puzzles, and wrote the script. The team would then send the dialogue to Roiland, who would send back “over an a hour of dialogue and riffing” that would really make the game better.

In addition to the VR being very good — cartoons are a perfect way to take advantage of VR’s current graphic capabilities — the game importantly feels entirely authentic to the ethos of the show. That isn’t often the case with IP-based games, VR or not. As a fan of the show, I totally felt like I was inside its universe.

My time with the demo ended in frustrating fashion — I had just figured out how to use this Bop-It!-like contraption when I was forced to leave. I’ll admit, I didn’t get as far into the game as I would have liked — there was just so much to figure out and play with. But no matter, the experience was thrilling.

In fact, if more games like this come to VR, it could be enough to convince me to make an investment in the platform. Simply put, it’s a game and experience that wouldn’t be the same if it weren’t in VR. I’m dying to go back inside, if only so I can solve that damn puzzle!