The Hunt For Undiscovered Drugs At The Bottom Of The Sea

In 2009, Kerry McPhail descended Jacques Cousteau-style towards the Axial Volcano, inside the cramped, 30-year-old little submarine DSV Alvin, with a pilot and another scientist. Four hundred and eighty kilometres off the coast of Oregon, they were collecting tubeworms, bacterial mats and bivalves living near a deep sea volcanic vent. These samples could potentially yield new pharmaceutical compounds — and in turn, new chemical cures and desperately needed antibiotics that are yet undiscovered.


“It was another world,” McPhail said, “with incredible sulfide spires and formations.” She was busy “helping the pilot navigate between them, trying to see where we are and recognise landmarks”.

The scientists didn’t notice that they’d forgotten to swap their carbon dioxide scrubber for a fresh one, a requirement partway through the eight-hour dive.

“We didn’t get a headache from too much CO2 or anything — we were so involved in what we were doing,” she remembers.

After ascending at the end of that dive they were left bobbing in the tank, nearly upside down at the ocean’s surface for a half hour, waiting to be recovered by the vessel that brought them out there — an especially tricky encounter in the choppy water. But they made it.

“It was the best experience I’ve ever had,” she said.

Pharmaceuticals come from all over. These days, we synthesise most in a lab — but the chemical that becomes aspirin once came from willow bark. Insulin was once derived from animals or safflower. Some put extract from aloe vera on their burns.

While nature and science have yielded countless useful drugs for modern medicine, we’re always in short supply of something. Right now, humans are running out of antibiotics. Bacteria just evolve too fast, and any bug killer we throw at them becomes ineffective when the few that didn’t die reproduce after a few generations. And, of course, there are the cancers and viral illnesses for which there are still no cures. 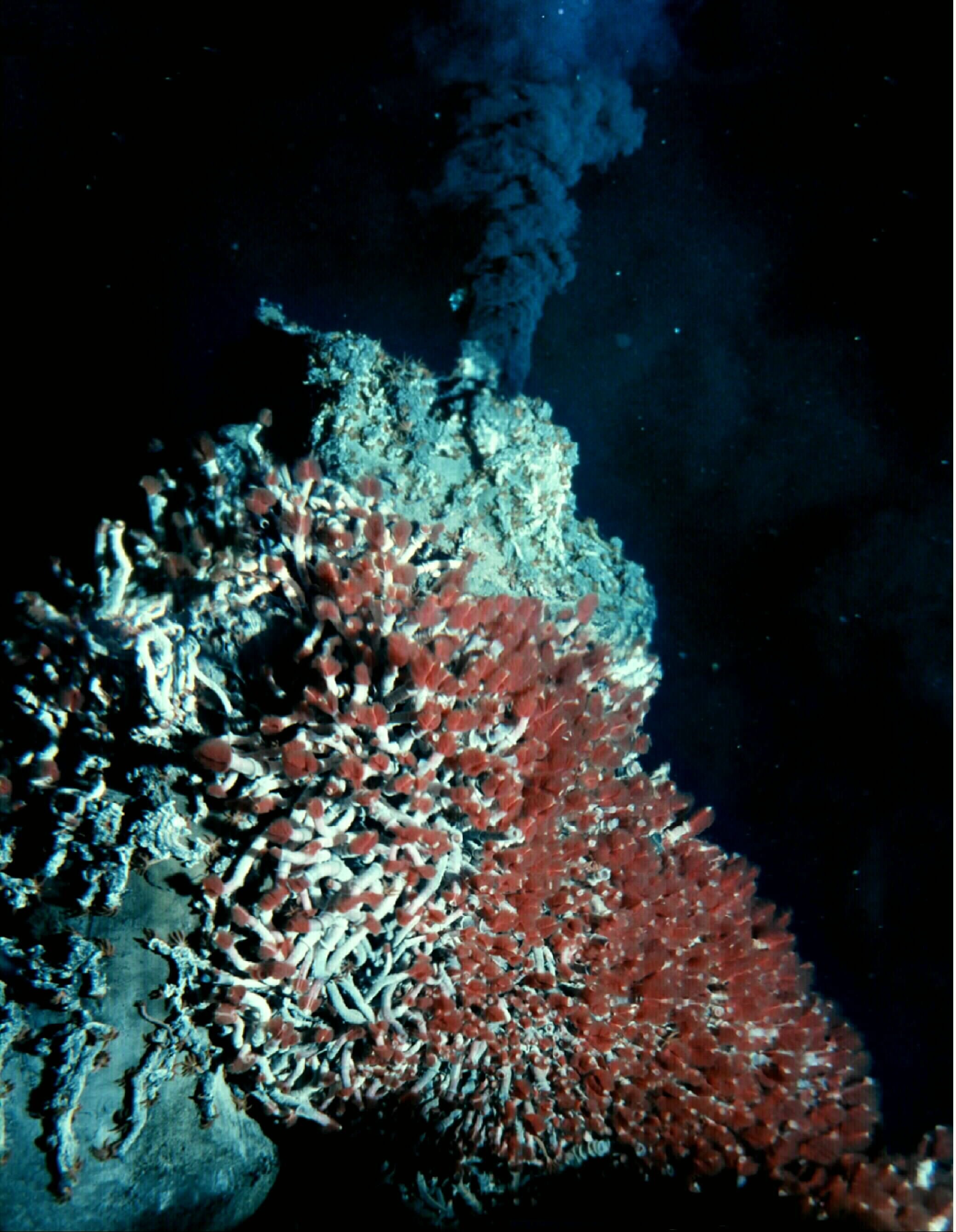 A black smoker vent, red tubeworms off the coast of Oregon on the Juan de Fuca Ridge. Photo: University of Washington; NOAA/OAR/OER.

Some researchers hope a completely different frontier could contain a cornucopia of never-before-seen molecules to cure our ails: The hydrothermal vents on the seafloor where water seeps into cracks in the rock, is heated by magma, and spews out in smoke plumes from rocky towers that can measure well over 30m tall.

“The metabolism of the organisms at the deep sea vents are so different in the way that they use metals” in their energy-producing chemical reactions, McPhail, a professor in Oregon State’s College of Pharmacology, told Gizmodo. “The byproducts are surely different molecules than what we have in the terrestrial biome” here on land.

McPhail is a leader of an effort to “bioprospect” for new molecules with pharmacological applications on the seafloor around hydrothermal vents. She hopes to find a crazy array of chemicals inside the exotic creatures, from bacteria to molluscs, thriving on deep-sea volcanic vents — chemicals that may one day cure diseases or be useful as antibiotics.

“There are weird microbes in the hot springs in Yellowstone and other places like that,” said Bill Chadwick, an Oregon State University professor working on the National Ocean and Atmospheric Administration’s Earth-Ocean Interactions Program. “But in the deep sea there’s much more. Hydrothermal vents are an oasis of life with life forms that aren’t found anywhere else.”

“Hydrothermal vents are an oasis of life with life forms that aren’t found anywhere else.”

The idea of bioprospecting in general, even bioprospecting the ocean floor, has been around for decades, explained David Butterfield, oceanographer at the Joint Institute for the Study of the Atmosphere and Ocean at the University of Washington. It’s received a huge amount of attention, too, with lots of companies investing money and discovering useful underwater compounds. Sea sponges produce anti-psoriasis and even anticancer compounds, for example. Butterfield had spoken about hunting for compounds with a company called Diversa on a research cruise, but they were more focused on finding new enzymes, the molecules that help the body carry out its chemical reactions. Butterfield was looking for someone who would step up to really carry out a deep sea drug hunt around hydrothermal vents.

“Then Kerry came along,” he said. The two spoke about it in October of 2008. “I just wanted to make sure someone was doing it,” said Butterfield, “And get them out on a ship to collect the kind of material they would need to get started on that kind of research.” McPhail would become the volcanic vent drug hunter. 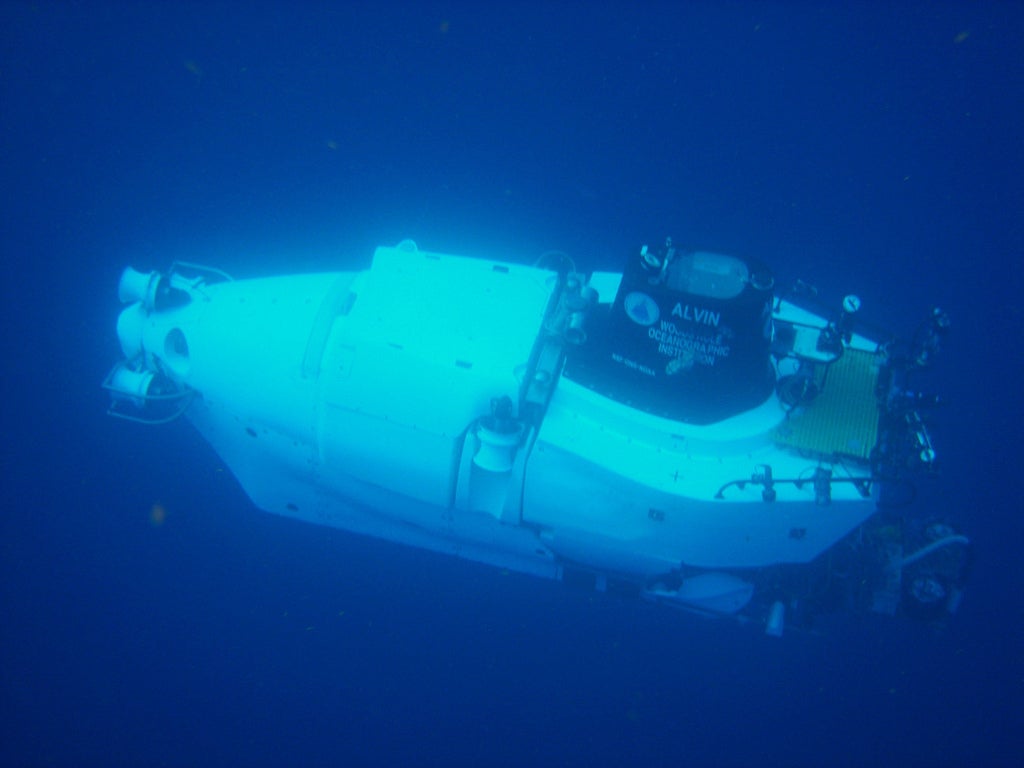 The Alvin submersible. Photo: Credit: Expedition to the Deep Slope/NOAA/OER.

Interdisciplinary teams of American scientists funded in part by the National Institutes of Health continued collecting samples at vents in places like Axial Volcano and the Mid-Atlantic Ridge through 2012, with researchers descending in Alvin or operating the remotely-controlled Jason submersible. The research has proven promising. They found animals with some strange bioactive molecules in the Mid-Atlantic Ridge, like mussels with new kinds of ceramides, cell-killing molecules that could possibly be used as anti-cancer drugs. Other exotic molecules looked like peptides, sort of like proteins except smaller and ring-shaped. These “cyclic peptides” include other molecules like the immunosuppressant drug cyclosporin and the first aid kit staple, bacitracin.

But a few potentially exciting compounds doesn’t mean volcanic vent medicines are ready for the big time. The research has produced more questions than molecules from species of bacteria that no scientists have ever seen before. Even after those trips, today, scientists are only working on decoding what the hell they have got and how to convince the bacteria to continuing making their strange new atomic arrangements far away from their high-pressure homes.

The research has produced more questions than molecules from species of bacteria that no scientists have ever seen before.

“It was tricky to get the bacteria to keep producing the molecules,” said McPhail. “Do they need metals or pressure or low oxygen? How do we get them to make these compounds again? Do they need other organisms, growing in culture together?” It took two years for McPhail’s team to coax some of the organisms they found to produce their crazy compounds again.

A combination of every field of science, from physics to chemistry to biology to geology, is needed to explain why these bacteria, shrimp and mussels produce their mystery molecules. Volcanic submarine zones create vents that heat the water to hundreds of degrees, so hot that it leaches compounds from the rocks comprising the vents. An aboveground volcano might release such compounds into the air, far from the reach of most terrestrial life. But the high pressures from the weight of the ocean above prevents the superheated water around the volcanic vents from boiling, so the chemicals stay dissolved in what looks like black smog. Life on these vents evolved to use the heat and the available chemicals to fuel an entirely new way of living, one that doesn’t require energy from sunlight like life on land does.

Not only that, but the way the tectonic plates on the seafloor move can completely change the kinds of chemicals and life forms found there. Most of the vents we’ve explored come from mid-ocean ridges, where tectonic plates spread apart. But in the past decade or so, scientists have also begun to explore the subduction zones, places where one tectonic plate slowly crushes another together and the bottom gets recycled. “That environment is very different geologically, chemically and biologically,” said Chadwick. “The water doesn’t get as deep or as hot or as isolated, and there are a lot more gasses in that volcanic environment.” Chadwick isn’t a chemist or a biologist, but thought those subduction zones could host an entirely different set of biological communities from the volcanic vents where plates are spreading. 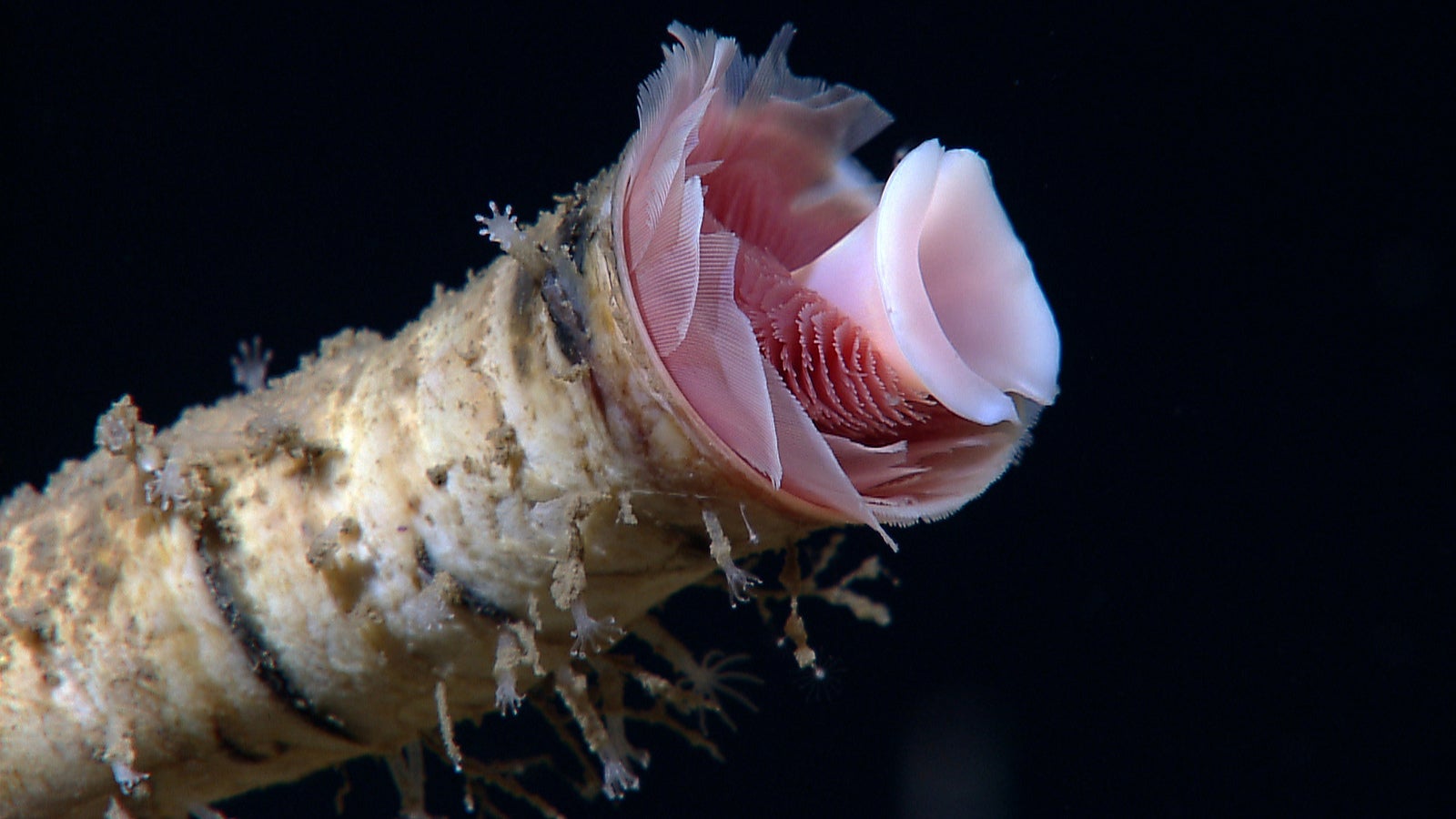 With all of that opportunity, bioprospecting hydrothermal vents for new pharmaceuticals is still in its early days — even if folks have been talking about it and bioprospecting other parts of the ocean for decades. Sure, lots of pharmaceutical companies have been issuing patents for ocean-borne molecules, but only a tiny fraction of underwater species have been found, according to a European Parliament report on bioprospecting back in 2015, and nearly all of the existing bioprospected molecules come from easier-to-access shallower waters. As for the vents, McPhail’s group is working on a textbook chapter on the subject, and scientists chatted about the topic while discussing whether to mine the seafloor at this year’s meeting of the American Association for the Advancement of the Sciences. And, while not pharmaceuticals, another group recently discovered a new DNA-building enzyme in a virus found on a vent and reported it in the Proceedings of the National Academy of Sciences last month, highlighting just how little we understand about the biochemistry taking place in the deep sea.

With any mining, even for exotic new drugs deep underwater, come concerns about feasibility, cost and the environmental impacts of scraping up all that life — even if it’s for a good cause. Hydrothermal vent communities have proven fairly resistant to natural changes, but haven’t had to deal with human impacts, according to a review published in the journal Marine Environment Research. Humans can unintentionally leave junk near the vents while exploring, and the light from ROVs can disturb ecosystems. Scientists aren’t even sure what might happen if companies tried mining the vents for molecules, since it hasn’t happened yet, according to the paper.

This type of work is going to be pricey, too. There aren’t figures for what harvesting might cost at the deep sea vents, but creating 300mg of the chemical halichondrin B from a sponge in shallower water cost a New Zealand company $US500,000 ($653,858), according to a United Nations report on bioprospecting published in 2005. This highlighted to the report writers the importance of coming up with sustainable solutions once useful molecules have been found. Then there are regulatory hurdles: The United Nations Convention on the Law of the Sea, or UNICLOS, governs taking resources from the seafloor. The ocean around countries belong to those specific countries, while seabeds outside those boundaries are fair games for everyone. Still, countries are obligated to “protect and preserve the marine environment”.

We may need to begin thinking about these issues soon. McPhail recently received word from a University of Washington oceanographer that there may be funding for an automatic vehicle to replace remotely operated and piloted vehicles to snag samples from the seafloor. “I can sit and watch in realtime data being collected,” said McPhail, and it could more efficiently pick up more samples without the scientists needing to go on seafaring voyages.

But losing the ocean trips is a bittersweet change. “It’s hugely disappointing,” she said. “Being able to be there and say, ‘Oh there’s an unusual thing we’ve never seen before, can we get it collected?’ That part of the discovery won’t be the same.” There probably won’t be any more The Life Aquatic with Steve Zissou-style jaunts to the exotic ocean depths.

“Our days of going out to the vents are probably over.”