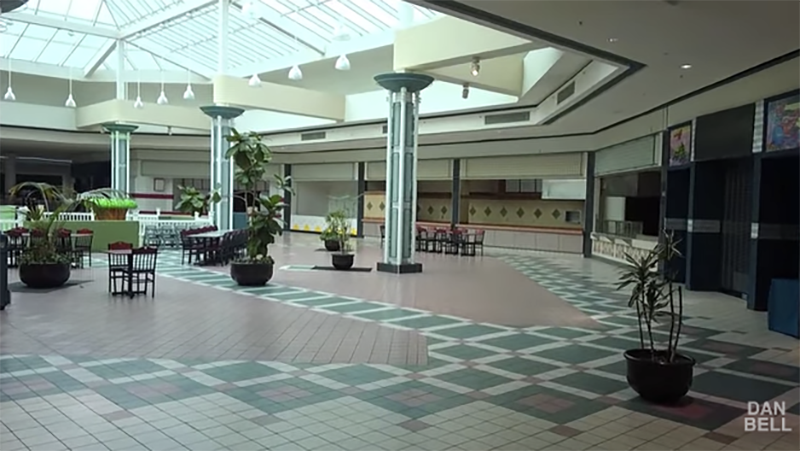 Video: The eerie quality of man-made structures that have become completely abandoned exists outside of Fukushima Daiichi’s exclusion zone, where convenience stores and homes have stood utterly still since a reactor meltdown made the area uninhabitable in 2011. The same sort of disuse can also be found across America.

Videographer Dan Bell has been documenting America’s countless mausoleums of forgotten economic booms through his series Dead Malls. As the title suggests, he travels the country touring these sprawling facilities that have been made largely redundant by online shopping, losing “anchor” stores year by year. What remains are the ghosts of capitalism past: Movie marquees that haven’t been changed since they shuttered, gated and gutted spaces where stores either fled or went out of business, and a few of the world’s last remaining Radioshacks. (Lol.)

Bell’s commentary is part researched video essay and part unboxing video. He flatly describes the upkeep level and colour palettes of food court tiles while dropping bizarre facts about how some of these dying shopping centres are owned by nearby universities or religious organisations. Each episode also opens with a montage Bell cuts together from salvaged commercials and VHS tapes, set to vaporwave music to enforce the conflicting feelings of touring a post-capitalist dystopia in present day. They’re weird and delightful.

Did I mention the series is also extremely difficult to stop watching? At least three hours of my weekend were spent chromecasting episodes of the Dead Mall series to my TV, vacillating between why am I still watching this and how is this so interesting. It’s a dissonant experience. I’ve arrived at the opinion that this rules.

Here’s an episode to start you off. The rest can be viewed here.