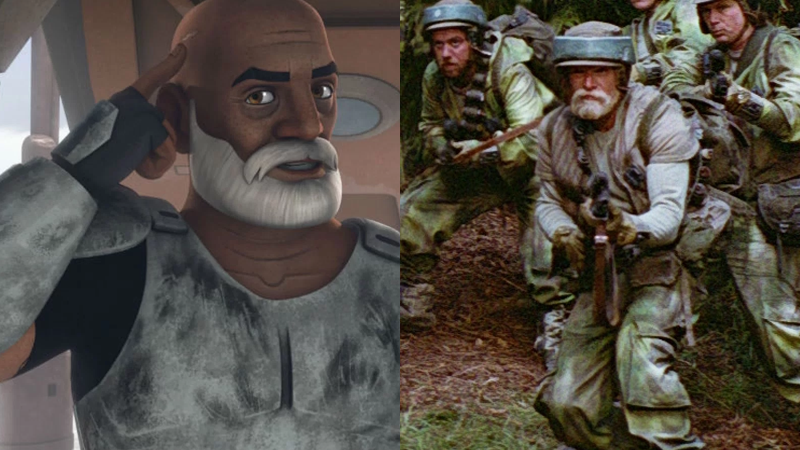 Ever since Captain Rex joined the crew of Star Wars Rebels and got himself a big ol’ bushy beard, fans — and even Rebels head honcho Dave Filoni — have theorised that the lushly bearded Rebel strike trooper on Endor is an older Rex. Well, it seems like the next season of Rebels might actually be lending some credence to that theory.


At today’s Animated Origins panel for Celebration Orlando, Dave Filoni dropped a sneaky teaser for this weekend’s Rebels panel by sneaking in a piece of concept art for a new look Rex is getting in the next season, finally ditching most of his old, ill-fitting Clone Trooper armour. And it’s a look that’s very similar to the gear of that Endor trooper many believe could be Rex.

Actually, it is Rex. All the concept art for the characters have a Wolf label. pic.twitter.com/BABoNhpkMf

“What’s that? That’s some kind of… don’t pay any attention to that. That shouldn’t even be in this folder!” Filoni joked when the art appeared behind him. “Why would he need camouflage? Doesn’t make any sense!” Meanwhile fellow panelist and Lucasfilm story group executive Pablo Hidalgo teasingly added, “Just speculate away, we’re putting it out there.”

It’s not an outright confirmation that Rex and that trooper — who in the old EU was jokingly named Nik Sant, a reference to his St. Nicholas-style beard — are one on the same (it seems like we might hear more about that at this Saturday’s Rebels panel at Celebration), the inspiration behind Rex’s new look is pretty clear. Hopefully it won’t be too much longer until this fan theory becomes Star Wars fact.