Physical therapy often involves the use of a device providing transcutaneous electrical nerve stimulation — TENS, for short — that uses electrodes attached to the skin to stimulate the muscles beneath. But virtual reality researchers have found an alternate use for the shocking technology: To let someone in a virtual world feel walls that don’t exist.

The human body already uses electrical signals to activate groups of muscles throughout the body, allowing us to walk, lift things and perform other physical activities. Researchers at the Human-Computer Interaction Lab (HCI) at the Hasso-Plattner Institute in Germany have taken that idea one step further to create a system that uses electrical muscle stimulation to simulate the feeling of bumping into a wall, or lifting a heavy object that doesn’t actually exist, for users experiencing a virtual world.

In addition to donning a virtual reality headset and gloves featuring tracking markers that allow the setup to know exactly where someone is moving in a virtual space, users also wear an electrical muscle stimulator and computer in a backpack. Electrodes attached to the user’s skin activate muscles in their arms, causing the limbs to twitch and move all by themselves when they touch or bump into a wall in the virtual world. 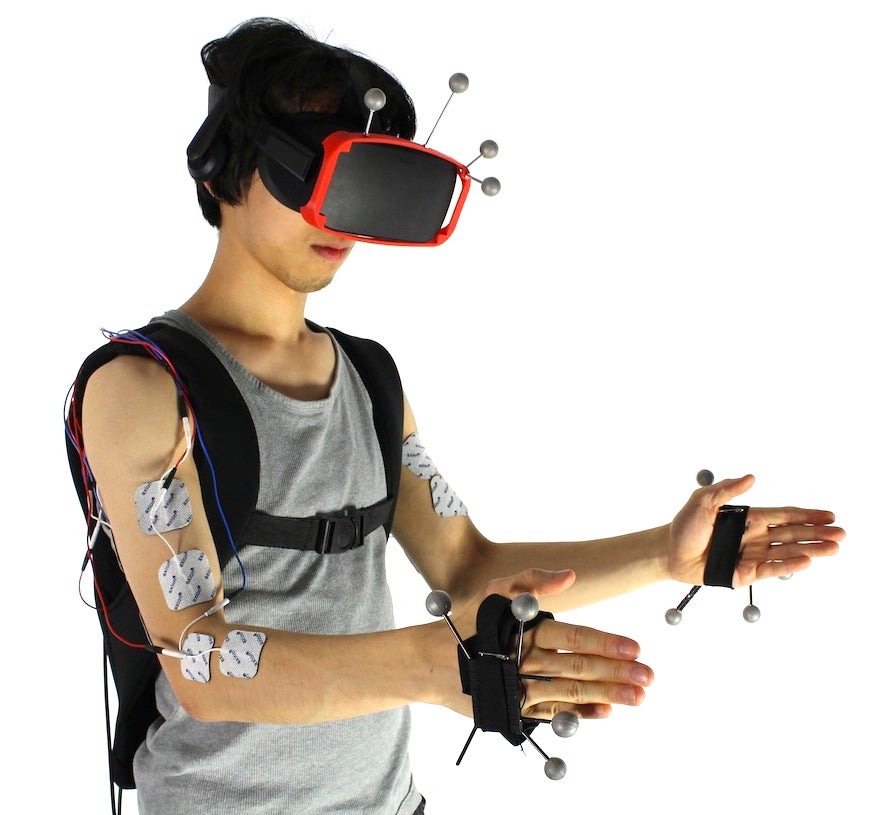 The new approach to haptics and force feedback can also simulate the feeling of lifting a virtual object. As the user reaches out to grasp and move an object, opposition muscle groups in the arm are activated to make it feel like there’s resistance, as if the object is heavy and being pulled down by gravity. The more electrical stimulation applied, the heavier a virtual object will feel.

It’s an innovative approach to bridging the virtual and real worlds, but these complicated systems also serve to make virtual reality less accessible. Playing a video game on your home console involves pushing a couple of buttons to power up your TV and hardware, but strapping into this VR setup requires lots of gear, in addition to the sticky electrodes that have to be applied to the skin. Not to mention those who already find virtual reality nauseating might not feel that adding electrical shocks into the mix will enhance the experience.