Watch the behind-the-scenes footage of any effects-laden blockbuster film and you’ll see actors running around in checkered body suits. Capturing the motions of a human performer is the most lifelike way to bring a digital character to life, but scientists at Stanford have come up with a less intrusive way to capture and study the motions of animals.

Trying to put a tiny motion-tracking bodysuit on a bird, or gluing tracking markers to its feathers is not only difficult, it’s cruel. But there’s a lot we can learn by studying birds, which are still far more agile in the air than even our most advanced aircraft, and high-speed footage of birds flying in a wind tunnel can only yield so many insights.

Previous attempts at recreating the intricate motions of birds in 3D have involved tracking unique patterns or visual clues on their wings, but scientists at Stanford’s Lentink lab have come up with a better way that involves turning birds into tiny flying projection screens, as detailed in the Journal of Experimental Biology. 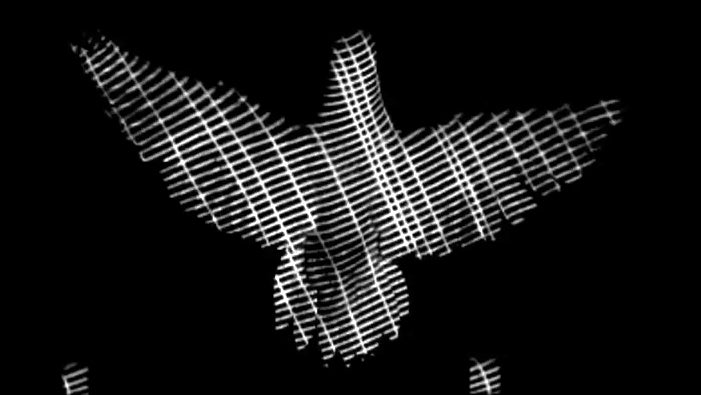 In the researchers’ experiments, two overlapping layers of light were projected on a white parrotlet as the bird flew a short distance between two perches. One layer was a dense uniform grid that helped an overhead camera capture a high-resolution image of the bird, while the other layer was a series of unequally-spaced lines, creating a visually-unique pattern. Both layers of light warped and deformed as the bird flapped its wings, and those deformities were captured by a computer, which then recreated the bird’s motions as a detailed 3D model that could be studied from all angles, and at any speed.

The advantages of the new system are that it’s completely automated, generating a 3D model without requiring someone on staff to translate all of the captured data using a complex modelling software. But in theory, it can also be used for almost any animal, or moving object, assuming you have a projector that’s powerful enough to cover something as large as an elephant’s strides, or a car being deliberately crashed.

The motion capture system itself isn’t the only innovation to come from this research. As the Stanford scientists started to analyse their test parrotlet’s flight in 3D — specifically the downstrokes of its wings — they discovered an extreme angle of attack was being used to deliberately create drag and airflow that served as additional forward thrust to help support the bird’s weight. The discovery could one day be used to help improve efficiency of drones and other small flying craft.