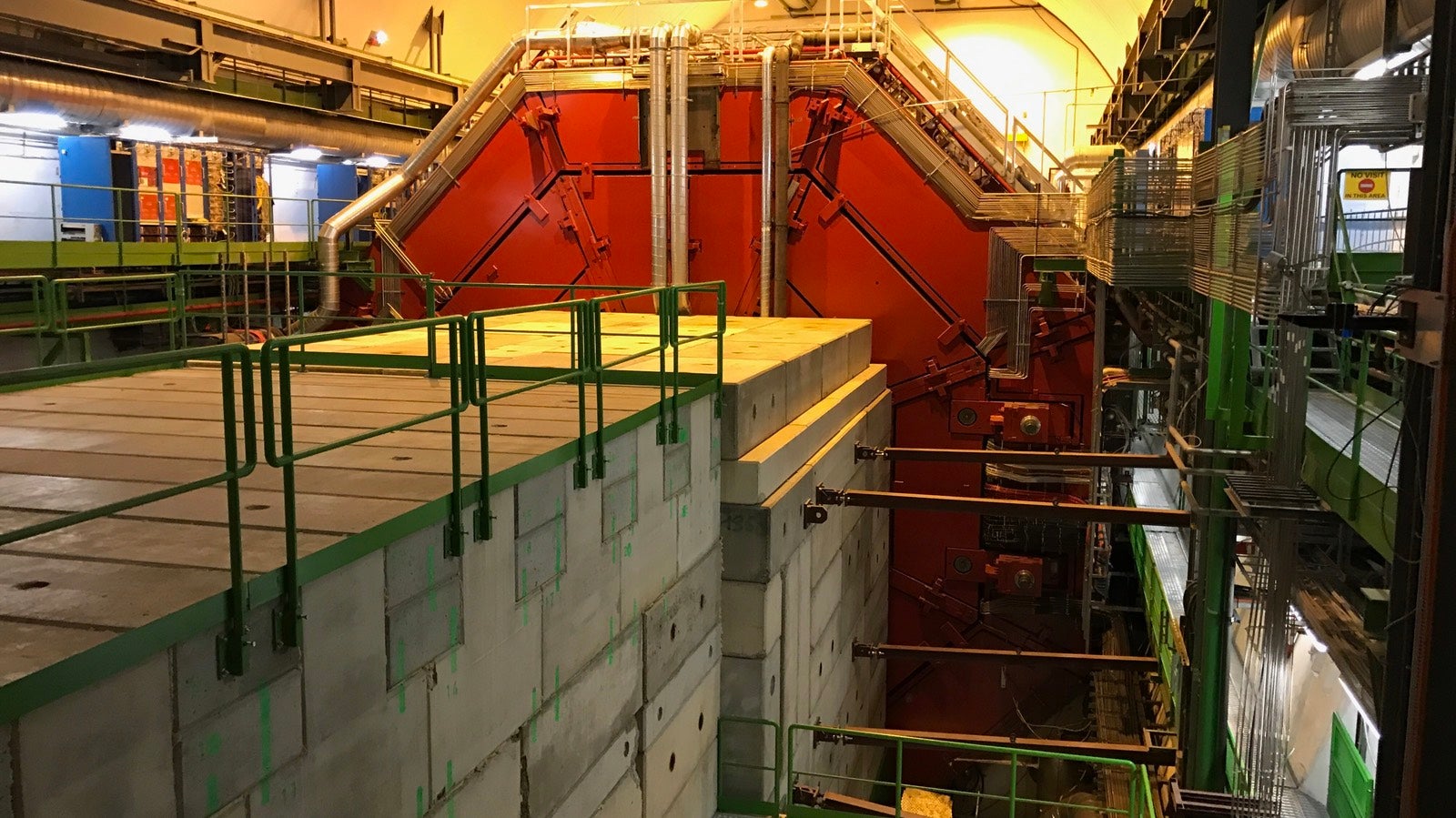 GENEVA, SWITZERLAND — Hiding in the suburbs behind trees and a meadow with furry brown donkeys is a warehouse with an elevator that only visits negative floors. Hundreds of feet down, hyper complex detectors inside an octagonal tube the colour and size of a large barn whistle loudly and peer like cameras at protons, the positively charged bits at the center of every atom. Those cameras may have just produced an exotic phase of matter in a brand new way. Maybe.

Scientist at the experiment, the Large Hadron Collider’s ALICE detector at CERN outside of Geneva, Switzerland, are hunting for a strange liquid that probably filled the baby universe a mere instant after the Big Bang. Other experiments have produced this “quark-gluon plasma” before, by slamming together comparatively enormous lead atoms. This time around, they have checked off some of the most important prerequisites needed to claim a discovery by colliding measly protons — but not all of them. The importance of the results, published yesterday in the journal Nature Physics, might not be immediately clear. Mainly, protons could provide a more precise way of looking at this weird quark-gluon plasma. “If you produce quark-gluon plasma in proton-proton collisions, you can think about shifting your attention there,” instead of at the messy data that comes from colliding lead nuclei, ALICE researcher Livio Bianchi told Gizmodo on a sunny afternoon in a CERN cafeteria. “Protons are much easier to treat.” The discovery will also help physicists better understand what happens when protons collide, giving us more accurate data to guide our search for undiscovered particles. The outcome of proton collisions has been used to discover new particles before, like the Higgs Boson.

All protons and neutrons are made of two kinds of quarks, “up” and “down” flavours. But four other kinds of quarks, “strange,” “charm,” “top” and “bottom” also exist, forming a zoo of exotic particles. Glue-like particles called gluons hold these quarks together in pairs and triplets under normal conditions, and it’s impossible to find a quark alone, since the force between them grows stronger with distance. Crank up the energy, though, and quarks take on brand-new arrangements, eventually becoming a hot soup where they’re all sort of loosely bound together like a perfect fluid. This is the quark-gluon plasma that scientists want to understand.

Collider scientists knew about this quark soup from very high-energy gold or lead nuclei collisions at the United States’ RHIC collider and the LHC. But in order to really claim a discovery of this proton-produced quarky broth, they have got a checklist of several items they need to hit. The particles in the trillion-degree-plus liquid fireball need to expand collectively. There should be more strange quarks as the total number of particles spewing out of the fireball increases, a property known as “strangeness enhancement.” And jets of particles that usually stream in pairs out of the collision should only come in singlets — one of the jets should be suppressed.

And the ALICE detector is really, really good at determining the identity of all of the individual particles exploding out of the collision, thanks to the complex array of detectors housed inside its shell. The experiment whistles like a steam engine as it sends its data up from its cavernous lair, through an apartment building-sized stack of electronics and computers, and into the its control room or onto the CERN servers. 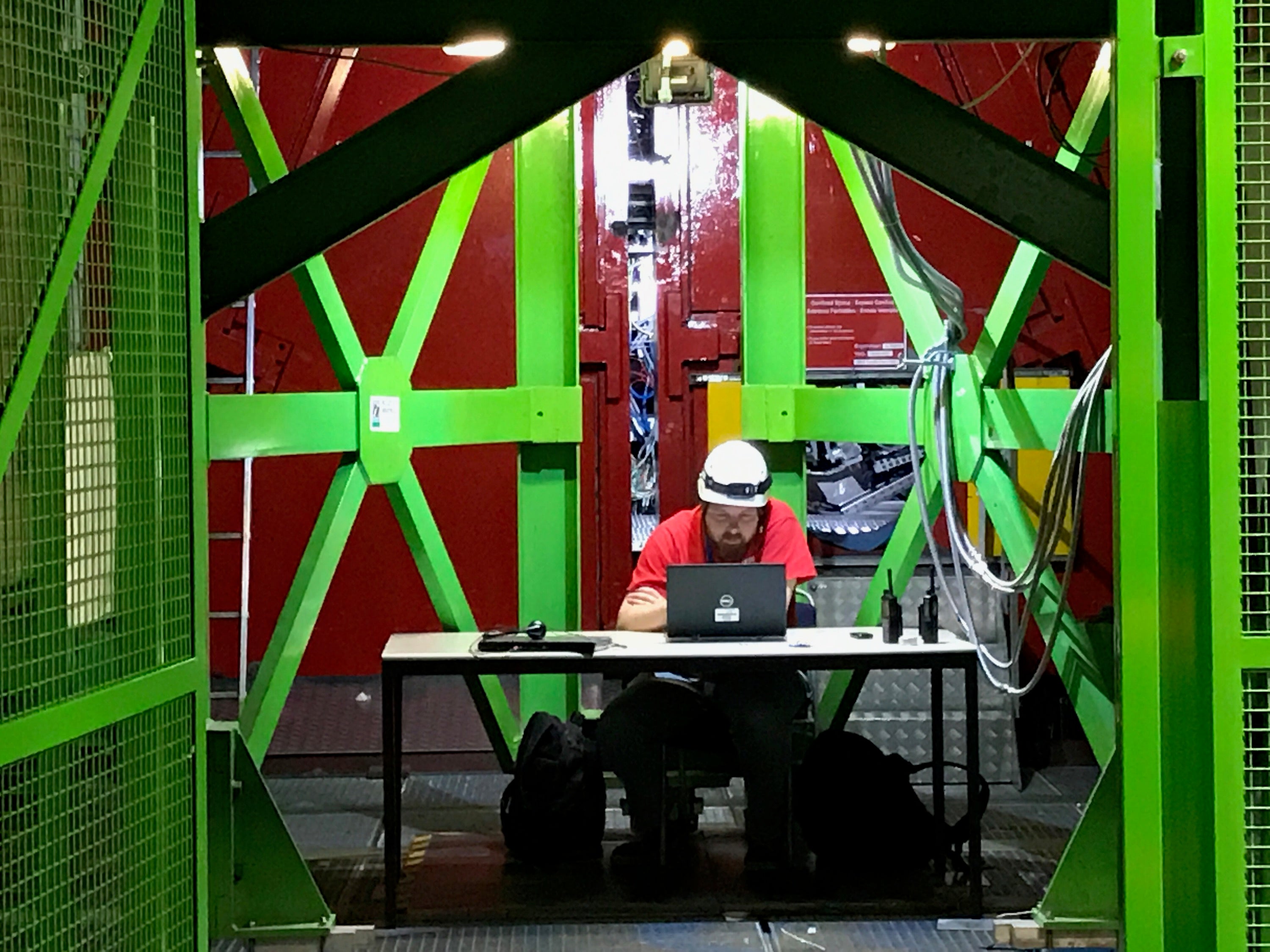 I think this man was guarding the entrance to the experiment (Ryan F. Mandelbaum)

If the experiment sounds confusing, it’s fine — particle physics is basically taxonomy, but the animals are less cute and follow complex mathematical rules instead of genetics.

And, if you feel like this all is very speculative, you should. No one is saying that they found this quark gluon plasma in proton-proton collisions. After last year’s excitement over a particle that turned out to be nothing, physicists always hedge their bets, presenting only data, its limitations and its importance whenever possible, rather than making bold, hyped-up claims, Bianchi told me in a car ride on the way to the ALICE detector.

“The press might interpret this as we discovered quark-gluon plasma [in proton proton collisions],” he said. “This is what we’re mostly worried about. We want to be really precise.” 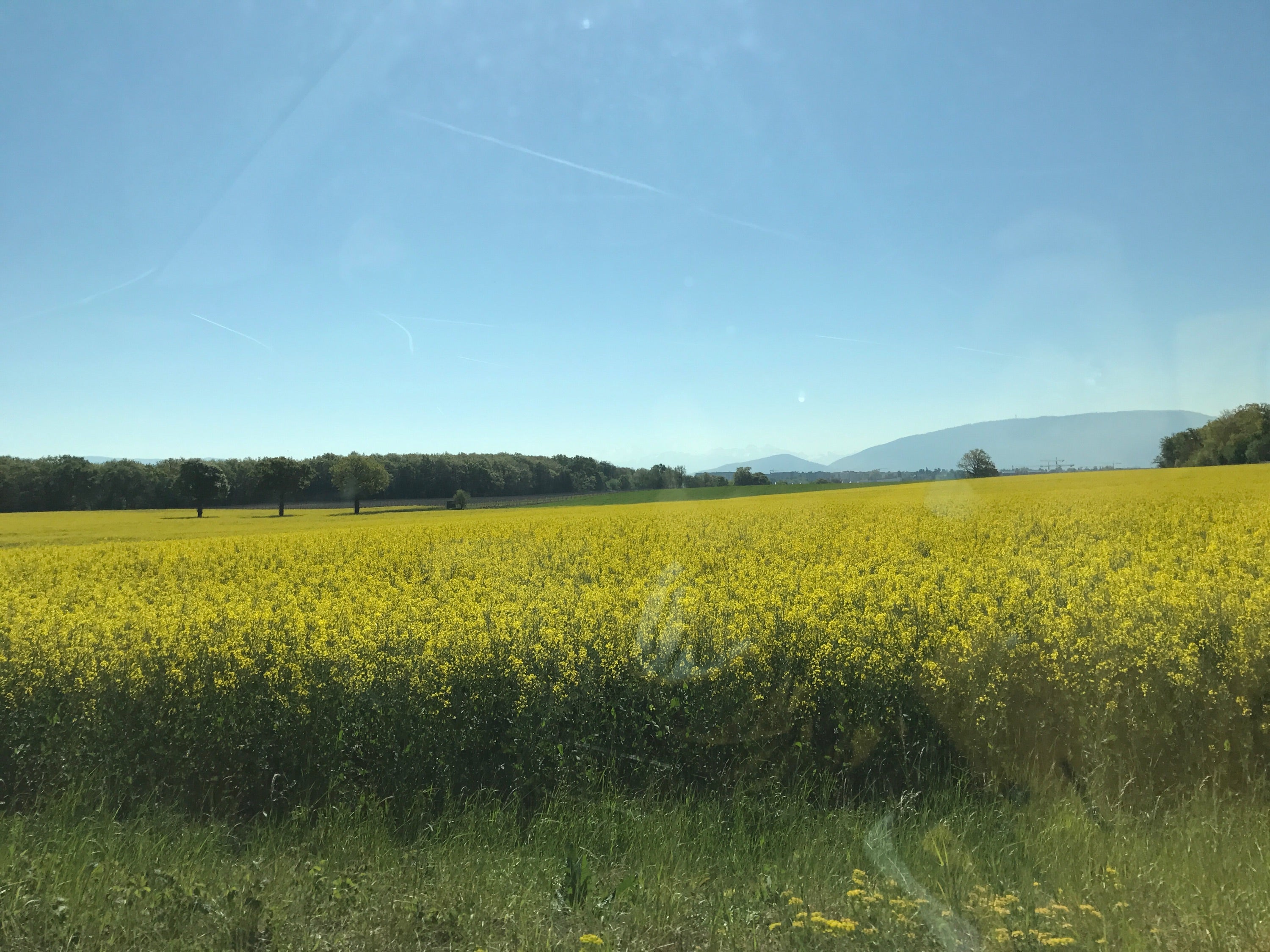 The Swiss/French landscape outside of CERN (Ryan F. Mandelbaum)

After all, the physicists still have the third check mark to tick off — they have to see one of those jets fail to completely pass through their hot particle soup. And scientists aren’t sure they will be able to detect this effect with proton collisions. “Maybe you don’t have jet quenching because the size [of the colliding particles] is so small that the jets escape easily in both directions,” said Bianchi. We don’t know. People are working on that.”

Regardless, ALICE and other CERN detectors CMS and ATLAS have hundreds of physicists combined looking for similar results. This week’s results were only reported using proton collisions at around half the energy level the LHC is capable of delivering. This week, the Large Hadron Collider is turning back on after a several month long technical stop, and the experiments will continue, colliding protons and trying to understand the quark gluon plasma, what other kinds of stuff exists in the universe, and exactly what events took place after the Big Bang turned the universe into the one we live in today.