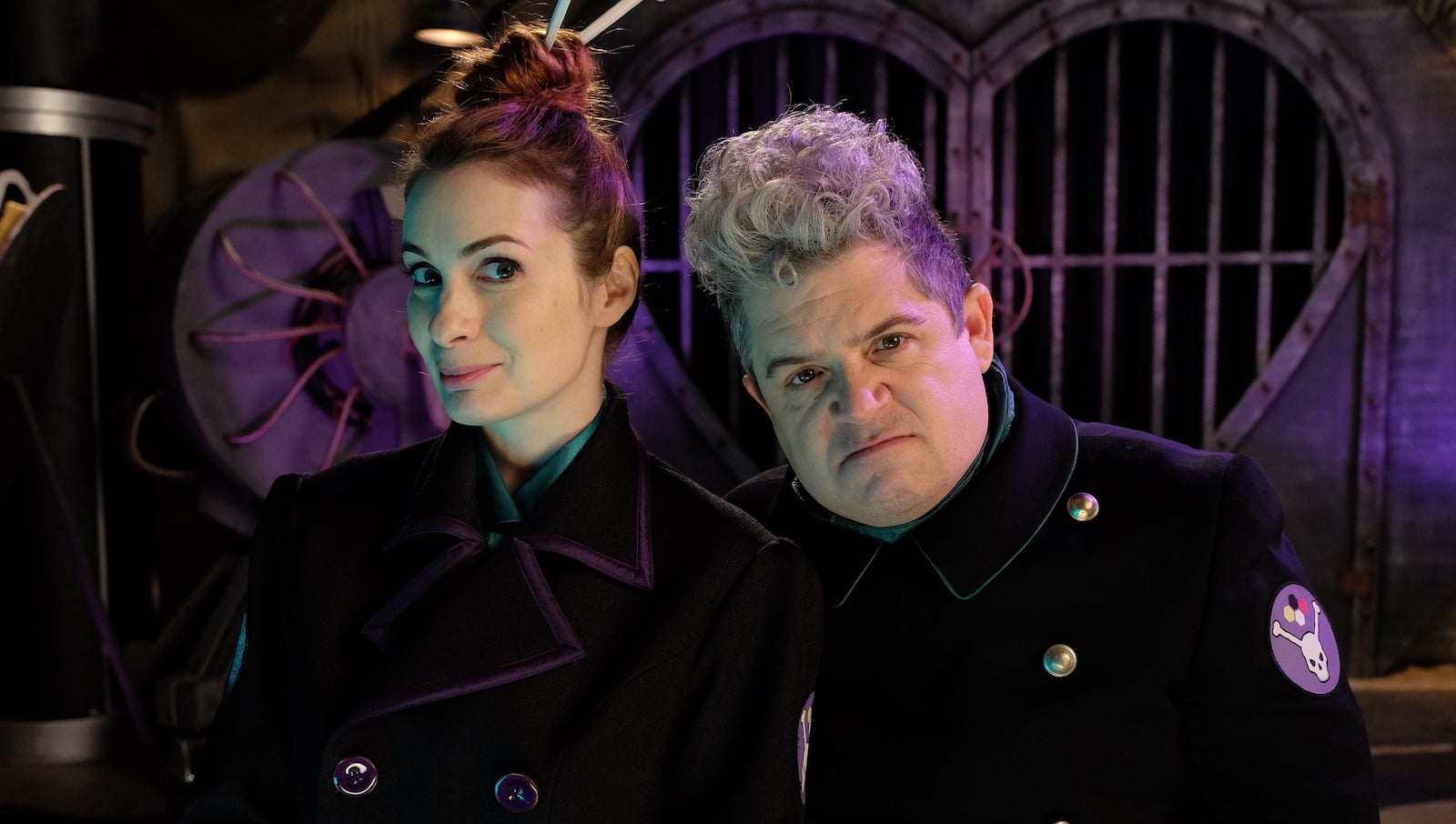 Felicia Day was famously mistreated by Dr Horrible, but now the lab coat is on the other back. As Kinga Forrester, the new Mad tormenting Jonah and the ‘Bots on the upcoming Mystery Science Theatre 3000, it’s her turn to be evil — and not just on-screen. Here, Day relates her serious bad movie cred and explains the perfect way she joined MST3K‘s anticipated return.

I’m sure you’ve answered this question a million times by this point, but I feel like it’s required to start by asking about your history with bad movies in general and MST3K in particular.

Felicia Day: Bad movies are my favourite. I love bad movies. I actually read a study the other day that smarter people like bad movies and I felt really vindicated. Because I’d much rather watch a cheesy kung fu film from the ’70s than any Oscar-winning film ever.

Mystery Science Theatre in particular has definitely been a part of my life since my childhood. My brother and I were home-schooled, so we didn’t really get out of the house much, and we didn’t actually get along very well, either. The one thing that always unified us was Saturday mornings, and sitting down to watch Mystery Science Theatre 3000 together.

So I have a soft spot for bad movies. I’ve been in a couple myself.

Do you have a few favourite episodes?

Day: Oh man. There are so many. I have a soft spot for all the shorts, because they’re so ridiculous. I also love Manos: The Hands of Fate — Torgo is my favourite character in all of fiction. And Santa Claus Conquers the Martians is one of my favourites, because we would watch that every year around Christmas, to this day.

How did you get involved with the new series?

Day: I actually got the job because I went up to Joel at a convention to take a selfie with him just to rub it in my brother’s face, and then we got to talking and he got to know my work and that’s when he emailed me. So I have my brother to thank, because I just wanted to rub his face in the fact that I met Joel and he didn’t. My brother got me the job.

I have to assume your brother hates you so much right now.

Day: He actually got to appear in one episode, and that was a dream come true for him. So I hooked him up.

You are a very good and kind sister.

I know. Well, I have to be nice to him, because my mum said I had to.

How much did Joel have Kinga conceptualised when he approached you, and how much did you bring to her?

Day: Joel had a lot of ideas about Kinga. Early on in the process he and I bounced ideas back and forth. He had me watch Grey Gardens, because he liked the eccentricity of those characters. He’s very visual and has an amazing creative mind, so when he sort of wrapped Kinga up in a package, I said, “Oh my gosh, I know exactly how to play her.”

Is there a story behind her name?

Day: She was always named Kinga from the pitch Joel emailed asking me to play her. That was literally the best email I’ve ever gotten besides Joss Whedon asking me to be in Dr Horrible. Those are my two favourite emails of all time, and I have a lot of emails.

MST3K once described Dr Forrester as someone whose passion for evil far exceeds his aptitude. Would you say that’s true of Kinga?

Day: I think Kinga is very driven, and she’s definitely a leader — or in her mind she’s a leader — but a lot of her plans may not be as well-thought out as her ambition warrants.

I got the sense that Kinga is not necessarily evil but someone who wants to do her job well, and it just happens that her job is to be an evil mad scientist.

Day: Yeah. A lot of what drives Kinga is that she’s trying to live up to the Forrester legacy, her dad, and her grandmother. There’s a high bar for evil there and I think underneath it all, Kinga really didn’t get enough love in her life. Or evil, for that matter.

Patton Oswalt plays your henchman, TV’s Son of TV’s Frank. Had you known him before this? Because watching you two made it feel like you’d been playing these roles together for years.

Day: Thank you! That’s really nice. I met him a couple of times around, socially, but very briefly, so when I learned he was going to be my sidekick I was kind of intimidated because not only is he a brilliant writer and satirist and stand-up, but actor. But once we got on set and met formally and started working, we had the best time together.

It was so such fun to create the dynamic between the two characters, and by the end we were improv-ing at the end of every scene we shot.

I know the episodes had a pretty quick turnaround time. What was the production like for you two?

Day: We shot [them all] in several days, actually. It was crazy. I’m from the web, so getting dozens of pages a day… it’s not easy, but it doesn’t throw me, especially when you have awesome people to work with. We did do the episodes very fast, but it was really the production and the crew who were amazing for being able to make that happen with all the props and set pieces. I can’t give away, but there are some really fun sketches [coming up] that could never have been done with a normal production crew.

Day: Yeah, but I loved doing that because if you stop and think you start to get intimidated, especially if you know you’re in one of your favourite shows in history

Day: I do like being in the driver’s seat. In my career I’ve been the victim a lot — I’m always dying, because people love to kill me off. So I really like being the one to kill someone. Well, the MST-version of killing. [laughs]

Might I suggest getting Neil Patrick Harris to guest-star as one of Kinga’s invention’s test subjects? And complete the circle?

That would be an epic episode.

I’m sure you can’t tell me who it is specifically, but do you know who Kinga’s mum is?

Day: Yeah, I can’t really address it, it’s a back-story that will hopefully be uncovered as the episodes — or seasons! — unfold.

You guys are keeping quiet about what films you’re riffing in the new season. But if you had a real life enemy, what bad movie would you torment them with?

Day: Oh. Oh my gosh. There is a movie — and I’m not sure if they could do it on Mystery Science Theatre — it’s The Wraith. But it’s a Charlie Sheen movie from the ’80s where he plays a murderous alien car.

I would very much like to see that movie on MST3K.

Day: Well, there’s a gratuitous nude scene in it, though, so it’s not exactly MST3K material.