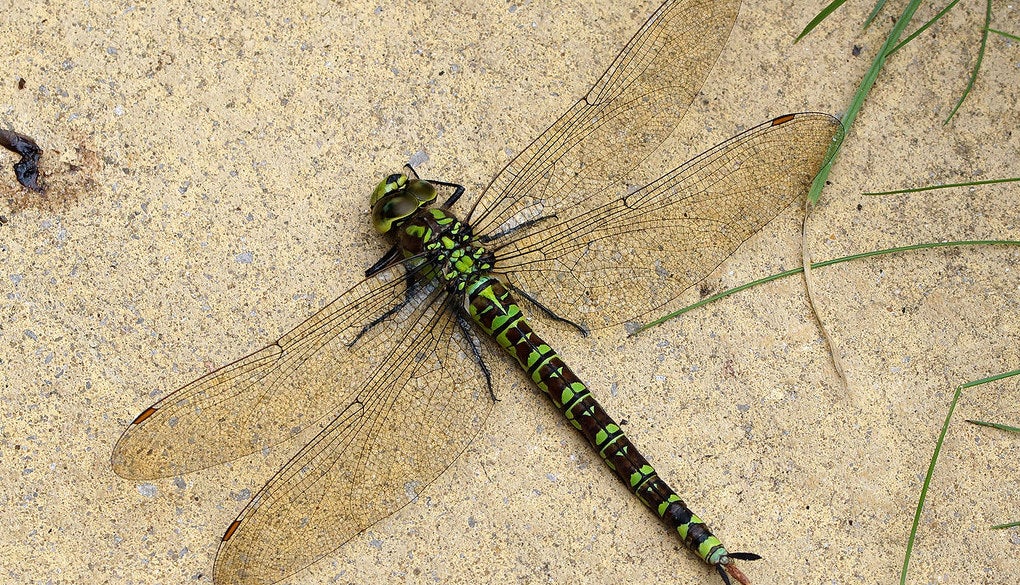 It’s a scenario many women in the room are all too familiar with: You’re sitting in the park, enjoying some R&R, when you spy a leery Y-chromosome carrier lumbering in your direction, clearly looking to test the pickup line he found on Reddit last night. You could run; you could start talking loudly and to no one in particular about your last menstrual cycle. Or, you could do as the female moorland hawker dragonfly does, and pretend to be dead.

Biologist Rassim Khelifa first witnessed a lady ‘fly being pursued by a male on her way to a pond several years back — and he could not believe what happened next. He wrote about it recently in the journal Ecology.

On 5 July 2015, while I was waiting at a pond near Arosa, at about 2000m elevation, I witnessed a dragonfly dive to the ground while being pursued by another dragonfly… As I approached the two insects, I realised that they were Aeshna juncea [the moorland hawker dragonfly], that the individual that crashed was a female, and that she was lying motionless and upside down on the ground….The male hovered above the female for a couple seconds and then left. I expected that the female could be unconscious or even dead after her crash landing, but she surprised me by flying away quickly as I approached.

Khelifa went on to observe 31 other unwelcome insectoid advances, and found that in an incredible 27 of them, the female dragonfly pulled the fake death ruse. Twenty-one times it worked, and the male bug buzzed right off. Each of the incidents occurred near the water, as a lone female was travelling toward or away from her eggs.

As Khelifa explained to Gizmodo in an email, sex is a risky business for the female moorland hawker dragonfly — especially after she’s just dropped her eggs.

“The function of male penis is not only limited to sperm transfer, but also to remove sperm left in female storage organ from previous matings,” Khelifa said. “In fact, males have evolved a sophisticated penis structure that sweeps sperm out of the reproductive tract of the female. Therefore, since one copulation is enough to fertilize all eggs, it is disadvantageous to carry out extra-copulations… given the potential survival costs.”

Faking one’s death to avoid sex, while never previously seen in dragonflies, “has been observed in other arthropods such as a species gift-giving spider, two species of robberflies and one species of mantid,” Khelifa said. “So, the new case of sexual death feigning in [dragonflies] is the fifth for the entire animal kingdom.”

Solidarity, little bug sisters. You’re a source of inspiration to us all.