Drawing A Lotus F1 Car For A Magazine Article Isn’t As...

Tardigrades, also known as “water bears”, are probably the toughest microscopic creatures on the planet, capable of surviving freezing, radiation and even the vacuum of space. They’re also able to withstand complete dehydration — and scientists have finally figured out how they do it.


A scanning electron micrograph image of six tardigrades in their dehydrated state. When tardigrades dry out they retract their legs and heads within their cuticle forming a ball like shape known as a “tun”. (Image: T. C. Boothby)

Researchers from the University of North Carolina, Chapel Hill, have discovered a unique set of proteins, now known as tardigrade-specific intrinsically disordered proteins (TDPs), that turns parts of the tardigrade’s body into a glass-like substance when it dries out, protecting its cells from destruction. This trick, say the researchers, could be applied elsewhere, including agriculture and medicine. This study now appears in the science journal Molecular Cell.

Classified as “extremophiles”, tardigrades have confounded and astounded scientists for over two centuries. These ancient and surprisingly adorable microscopic creatures are capable of withstanding the worst that nature can throw at them, making them a valuable organism for scientific inquiry. 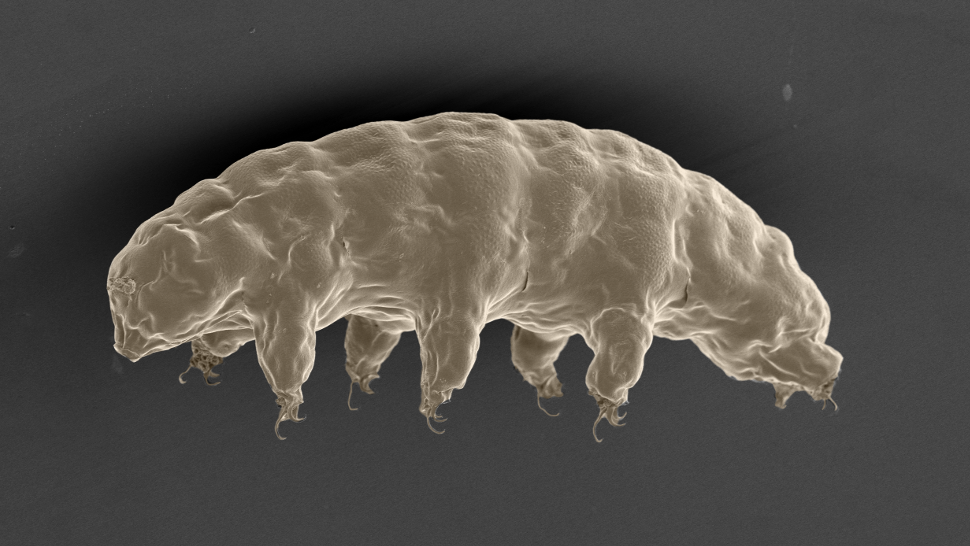 A recent study from Japan showed that the vast majority of tardigrade genes are “proprietary”, meaning these animals evolved their death-defying traits on their own, and were not “stolen” from other animals (an evolutionary process known as horizontal gene transfer). Thus, water bears have genes — and by consequence, characteristics — that aren’t seen anywhere else in the animal kingdom.

Normally, tardigrades, of which there are over 1000 species, spend their days crawling around wet moss or swimming through the oceans. Their global travels often get them into trouble, and they have managed to evolve an incredible array of life-saving tricks. As noted, tardigrades can withstand severe environmental conditions, such as freezing, radiation and, of relevance to this post, dehydration.

When tardigrades dry out, they retract their legs and heads within their cuticle, forming a ball-like shape known as a “tun”. They can stay in this configuration for up to a decade or longer, and then spring back to life once water is available.

Other organisms, like yeast, brine shrimp and nematode worms, use a sugar called trehalose to tolerate dehydration, or desiccation as it’s referred to by scientists. For years, scientists figured that tardigrades used the same compound, but biochemical analyses of tardigrades has revealed very low to no traces of trehalose in their tiny bodies. The absence of this compound in tardigrades suggested a different strategy, prompting Thomas Boothby and his team from UNC to figure it out.

The researchers came up with a clever plan: Expose tardigrades to various levels of stress, such as freezing and dehydration, and pinpoint the genes that suddenly become active. This strategy led to the discovery of genes that, during the drying out process, express the tardigrade-specific intrinsically disordered proteins (TDPs). Unlike most other proteins, TDPs have no fixed three-dimensional structure, taking on a protective glass-like texture. To show that this unique family of proteins worked, the researchers inserted the genes into other organisms.

“TDPs are required to protect the tardigrades themselves from desiccation, but they also increase desiccation tolerance when put into bacteria and yeast,” explained the study’s lead scientist, Thomas Boothby, to Gizmodo. “Amazingly, TDPs are sufficient even in a test tube to protect purified biological material like desiccation sensitive enzymes. The glassy solids that they form are thought to coat desiccation sensitive molecules and physically prevent them from breaking apart, unfolding, or fusing.”

Boothby says the most interesting aspect of the discovery is that tardigrades, who don’t use trehalose, have stumbled upon a similar solution to the dehydration problem.

“Trehalose is thought to form a glass-like solid when it dries that helps protect cells and their components,” he said. “We found that these tardigrade disordered proteins seem to be doing the same thing, that is, they also form glass-like solids. This is a great example of convergent evolution, where nature has found a way to do the same thing…but through two very different means — one using a sugar and the other a protein.”

The authors of the new study say there are a number of potential practical applications for these proteins, such as generating stress tolerant crop plants that can survive droughts, and stabilising pharmaceuticals in a dry state so that they do not require refrigeration.

More speculatively, these proteins might work in the cells of larger animals, and possibly even humans — the key word being might. But there’s reason to be hopeful; last year, scientists showed that the protein that protects tardigrades from radiation can be transferred to cultures of human cells. Perhaps the same thing applies to the TDPs, but that still needs to be proven in the lab. If yes, we might be able to engineer animals — and even humans — capable of withstanding extremely dry conditions. It may sound superfluous, but such a genetic tweak could prepare colonists for long stays on Mars where water is scarce.