This Sea Monster News Is Really Messing Me Up

See that creepy long-necked green beast eating a little fish in the illustration above? It’s called a Dinocephalosaurus, and it will haunt you like it now haunts me. But believe it or not, that serpentine silhouette isn’t even the weirdest thing about this Triassic sea monster. That would be the ancient reptile’s reproductive strategy.

A new study in Nature Communications shows evidence that the Dinocephalosaurus was the first animal in its clade to perform a live birth, as opposed to laying eggs as most other reptiles did at the time (and still do today). The clade in question is the Archosauromorpha group from which egg-laying animals like crocodiles and turtles evolved. See that little white blob on the creature’s abdomen in the illustration above? That’s where researchers think the embryo chilled out some 245 million years ago, when these reptiles roamed the ocean.

To come to its conclusion about the first live birth in this evolutionary group — a feat that was formerly believed to date back less than 200 million years — the team examined a fossil found in 2008 in the Yunnan province of southwest China. Much to their surprise, there was a little Dinocephalosaurus fetus inside the mama Dinocephalosaurus.

This isn’t really an open-and-shut case, however. Researchers initially believed that the fossilised remains inside the creature’ stomach could have been from a Triassic dinner, but ruled out that possibility since the fetus was the same species as the mother and positioned in a way that suggests it was actually developing in a womb. The team also reports that “the taphonomic absence of a calcified shell cannot be excluded”. In plain English, this means that it’s possible the fetus could have had a shell surrounding it that decomposed over the years. This seems unlikely since there are plenty of fossils from similar species with surviving shells.

So it seems like the ancestors of crocodiles birthed live babies back in the day! If that doesn’t freak you out enough, here are some other facts about the Dinocephalosaurus. Its neck was twice the length of its body. It used this impossibly long neck to sneak up on poor little fish and gobble them up. The long neck also enabled the creature to reach up to the water’s surface and take some gulps of air. Check out this handy graph from an old Science article: 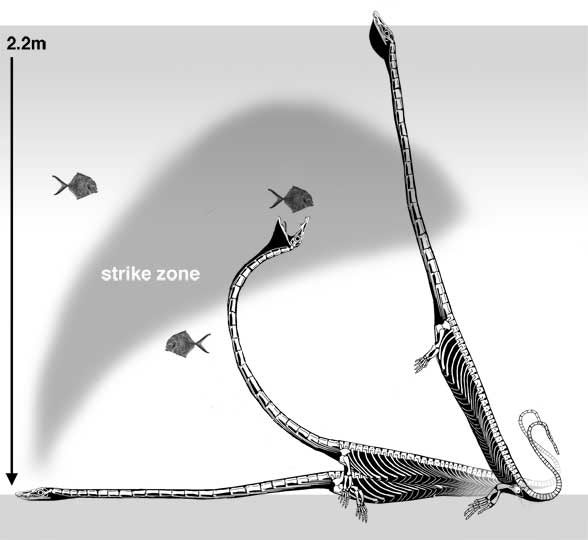 Now can you imagine going swimming with this beast lurking below the surface? There’s a reason Jurassic Park was always a bad idea.