Cinder Precision Grill Review: Someone Finally Made An Electric Grill That Doesn’t Suck 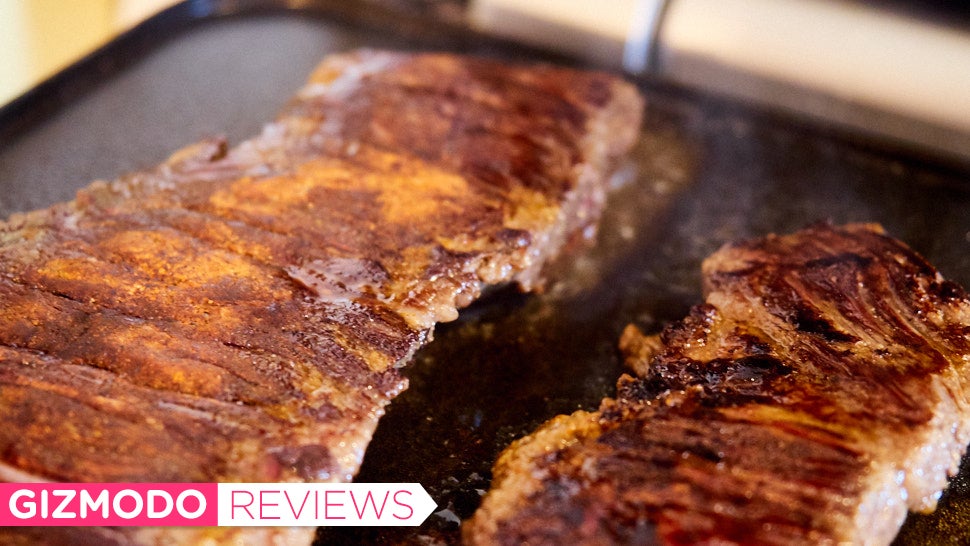 George Foreman changed the kitchen game when he slapped his name on a low-rent panini press and sold it to the masses. In the late 90s and early aughts, the George Foreman Grill was the kitchen appliance to own — after the refrigerator, microwave, and stove. But what if the George Foreman grill wasn’t that cheapo appliance your grandma bought you when you went to college? What if it was a super smart device that could cook your food perfectly without you ever keeping an eye on it. That might just be what the Cinder Precision Grill is — the magical meat maker I’ve always wanted.

Before we get to the cooking, though, please note: the Cinder is huge — it’s heavy and bulky, taking up just under a foot of counter space, and handily dwarfs my roommate’s five-quart Kitchen Aid. Which is a problem in a tiny apartment like ours. Dragging it out of the box I suffered some serious buyer’s remorse, and my roommate slowly chopped her parsley and glared at me.

Then we got to cooking. 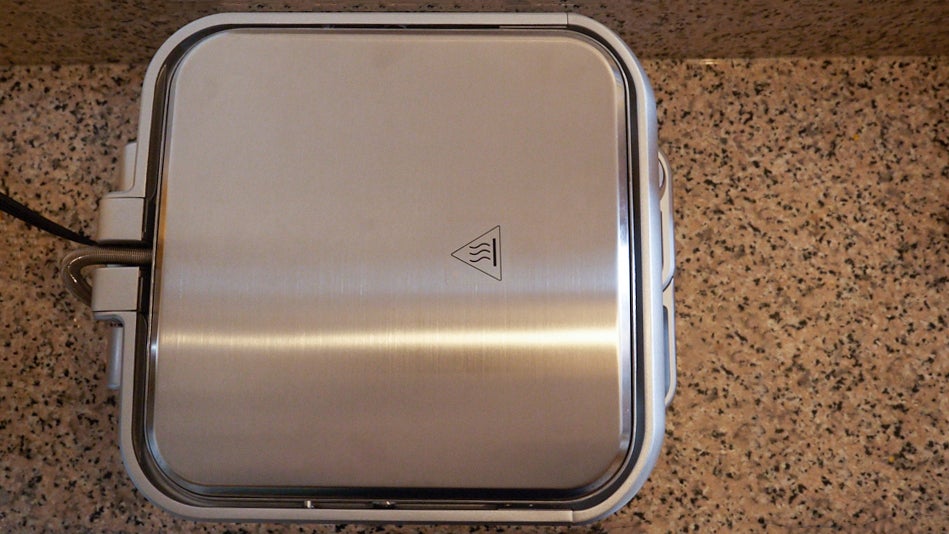 It takes up a lot of space on your countertop.

The Cinder is designed to cook proteins precisely — sort of like the expensive sous vide set up that cooks food using a water bath and a sealed bag. Cinder gets almost the exact same job done without the bags. Instead, it cooks the food between stick-free ceramic plates. You set the dial to the preferred temperature, or punch the food type into the Cinder app (iOS only for now), and the grill slowly heats up, filling the room with a smell that’s distinctly…hot. Like the smell of a curling iron before the first use, or a pan pre-heated on the stovetop. 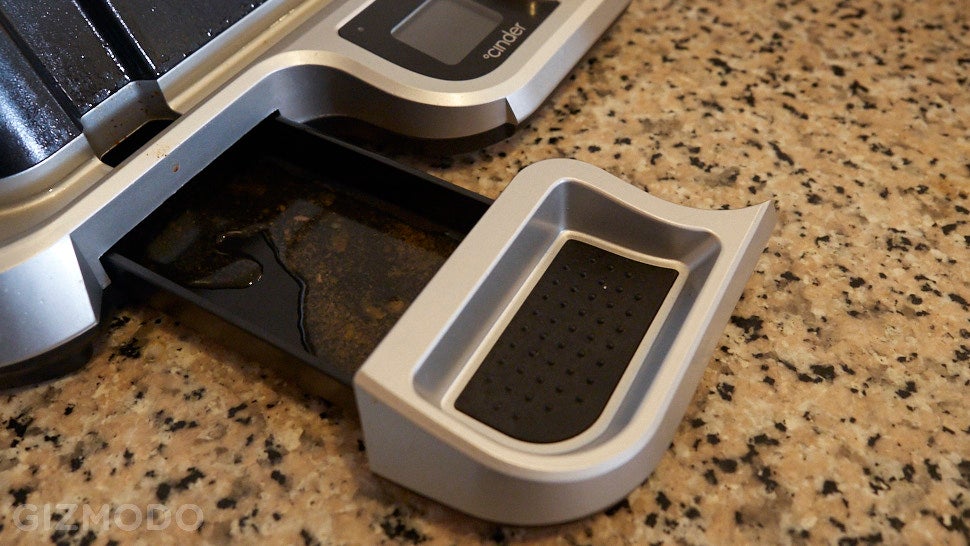 It’s super easy to clean. Rinse the gunk out of the tray and wipe the plates down with a sponge. Done.

That made my roommate nervous. All she wanted to do was cook some pork chops and my giant arse appliance taking up half the countertop seemed counterproductive. But curiosity beat hunger, and after a twenty-minute wait, and some mildly unpleasant smells, her pork chops were done.

Cooking food by heating it up to the precise temperature it should be served at takes a lot longer than just scorching it in a pan and hoping the inside isn’t too raw or overdone, and because the chops were cooked at a low temperature and for a longer time than traditional methods, the outside didn’t brown like you would it expect it to and sugars, like those in the pork chop’s marinade, didn’t caramelize — leading to the mildly unpleasant smell of all the acids in the marinade evaporating and leaving the sugars and spice behind. It also left us with meat that was perfectly cooked on the inside and really sad looking on the outside.

So I patted the pork chops dry, cranked the dial up to sear, and waited for the plates to reach a toasty 450 degrees Fahrenheit. That’s way less than what I can get a cast iron skillet to on a stove, but when I threw the meat back on the Cinder and closed the cover it stopped all the splatter that comes from searing. And when the meat finally came off the Cinder my roommate actually groaned with joy. According to her, the pork chop was perfect. 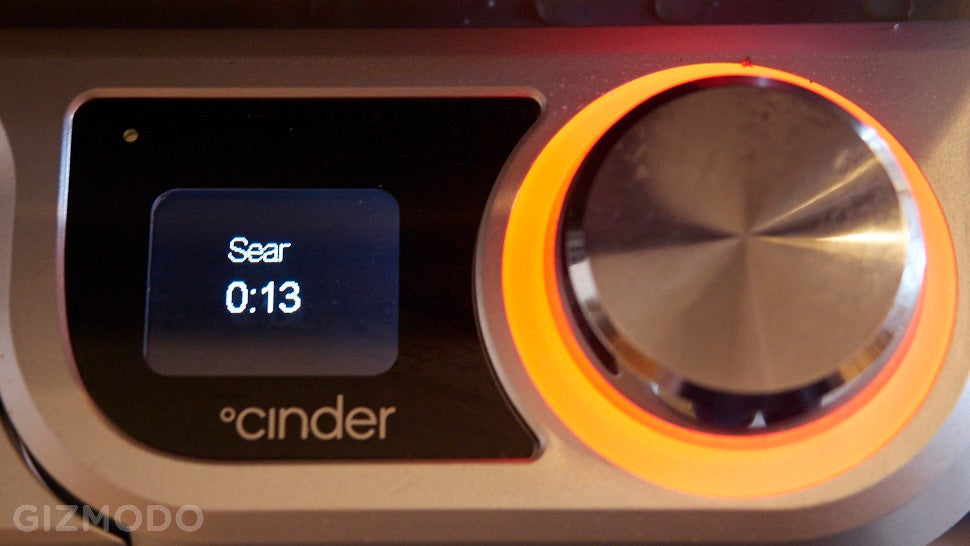 Adjust the dial to change the temperature or set to sear, which gets the grill scorching hot.

Hamburgers were less perfect. You can use the Cinder like a sandwich press, which let me cook them flat and fast (it took under a minute), but the ceramic plates on the Cinder don’t get hot enough to make the burgers pretty. Instead, they came out looking a like a sausage from McDonalds.

I’d be upset, but I still cooked a burger in less than a minute! And then I cooked a steak without filling my house with smoke or spattering grease everywhere. And that’s worth the $US250 ($327) I dropped on this thing when I pre-ordered it way back in October 2015 (Cinder only began shipping grills in January 2017). The price has gone up since. If you order now, it won’t ship until later this year (CEO Eric Norman told Gizmodo December is a conservative estimate) and it will cost $US400 ($524). But if you cook a lot of sandwiches, meat, and other foods that need to be flat, and you want to cook them near perfectly without hovering over them for every second of the day than $US400 ($524) and a year long wait might feel like a steal. 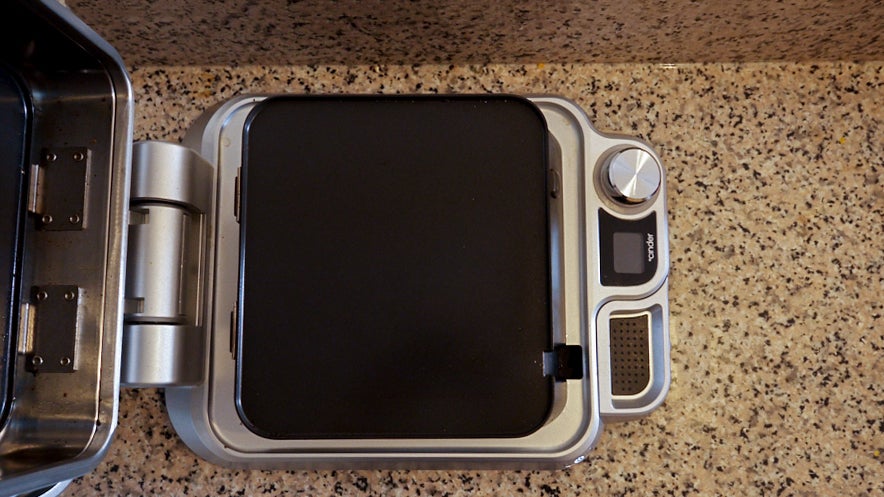 You can pre-order one for the next delivery shipment here.