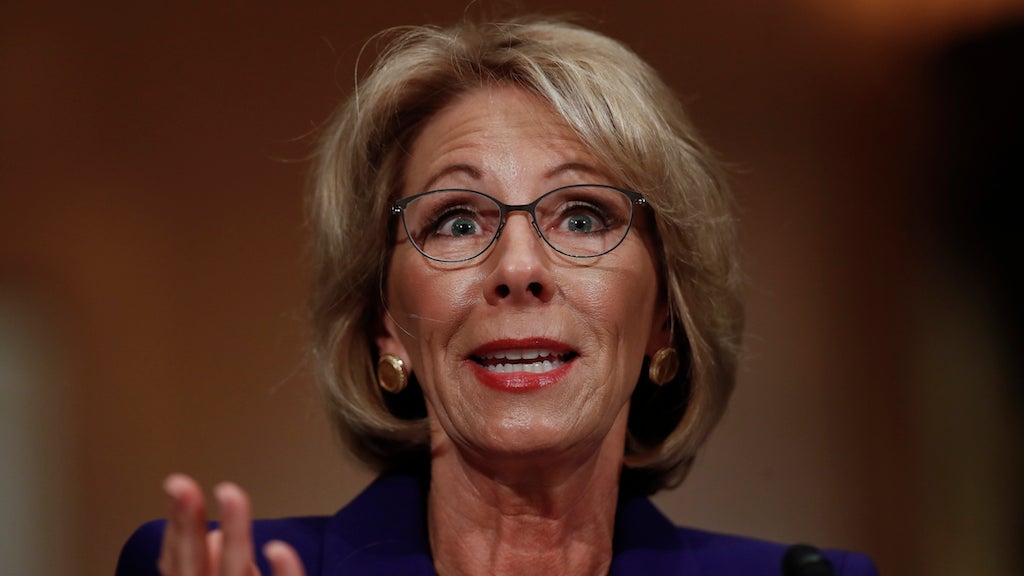 Despite widespread resistance, yesterday, Betsy DeVos was confirmed as US Education Secretary in a 51-to-50 vote. Though 48 Democrats and two Republican senators voted against her, ultimately, vice president Mike Pence broke the tie. For public school educators, and particularly science teachers, her confirmation is a nightmare realised.

While Devos has claimed she will be a “strong advocate for great public school”, her record suggests otherwise. In addition to having no actual classroom experience, Devos, a billionaire with myriad financial ties to education companies that could represent conflicts of interest, has long favoured privatising education through charter schools over bettering public education. In 1993, she worked to pass the first charter school bill in Michigan, and has since advocated to loosen restrictions on these schools in her home state, only to see students’ performance plummet. During her Senate confirmation hearing, Devos declined to support accountability rules for for-profit universities, which have a long, controversial history. In addition to low employment rates for recent grads, these schools have been accused of encouraging students to lie about their FAFSA information. They’re widely regarded as scams.

To make matters worse, DeVos has repeatedly supported Republicans who have waged war against climate change and evidence-based education. Her family supports the notoriously anti-science evangelical group Focus on the Family, and other fundamentalist Christian organisations. Unsurprisingly, DeVos also supports vouchers that can carry taxpayer dollars to religious schools, which could be teaching creationism. In effect, taxpayers could be sending their children to school where evolution is regarded as — to quote Trump — “fake news”.

“The president-elect, in his selection of Betsy DeVos, has chosen the most ideological, anti-public education nominee put forward since President Carter created a Cabinet-level Department of Education,” The American Teacher Federation wrote in a statement back in November. “In nominating DeVos, Trump makes it loud and clear that his education policy will focus on privatizing, defunding and destroying public education in America.”

“If a high school freshman can see how unprepared and how little DeVos knows about education, it’s sad.”

“I’ve never really been political until now and hearing how unqualified she is has really sparked my action,” John D, who teaches biology in US vice president Pence’s home state of Indiana, told Gizmodo. “As a science teacher from Indiana who tends to focus on evolution, I’m familiar with Pence’s viewpoint [editor’s note: Mike Pence does not seem to believe in evolution] and it seems like DeVos shares the same idea on evolution and creationism. That, paired with her utter lack of knowledge about anything education-related has me extremely concerned on what she’s going to try to do.”

“What is really disheartening is that my students are becoming aware of the situation and are looking into it with disbelief,” he said. “I had a conversation with a student just today about how ‘scary’ (her word, not mine) the whole thing is. If a high school freshman can see how unprepared and how little DeVos knows about education, it’s sad.”

I was educated in the public school system. It propelled me to be a Professor of Physics. DeVos will take away similar chances for others.

Educators in public universities, who’ve followed DeVos’ advocacy of for-profit institutions with bated breath, are also concerned for the future.

“I’m highly disappointed,” a teacher’s assistant in geology at a public institution in Illinois said. “For-profit colleges are a sham and target students from vulnerable backgrounds to get them to apply for loans to pay for a worthless education. I knew so many people in my high school who had not done well in school but were still concerned about their future and were sucked into this idea that a for-profit college would help them out and it was awful, because they wouldn’t receive any support and wouldn’t finish, and then be in debt for nothing.”

For teachers who’ve just started their careers, there’s an extra layer of unease.

“Next year I’ll have my first public high school teaching job, and I am still really excited about it despite this monstrous mistake being posted as our head of the Department of Ed,” biologist and science teacher Allie Sherman, from Marin County, California, said. “I think that teachers, especially newer teachers like myself, need to mobilize to resist the growth of charter schools, which often use labour practices that de-professionalize teachers and don’t cooperate with unions. We need to refuse to work at them, and demand to be respected as professionals of our craft.”

Like John, Sherman is troubled by DeVos’ stance on science and facts in general. That said, she’s ready to fight back.

“DeVos may try to push some backwards anti-science curriculum, and that’s going to be tough for science teachers in places that already struggle with anti-science culture,” Shermain said. “But I think those of us who really understand and care about science are going to laugh at any attempt to tell us what to do in our classrooms.”