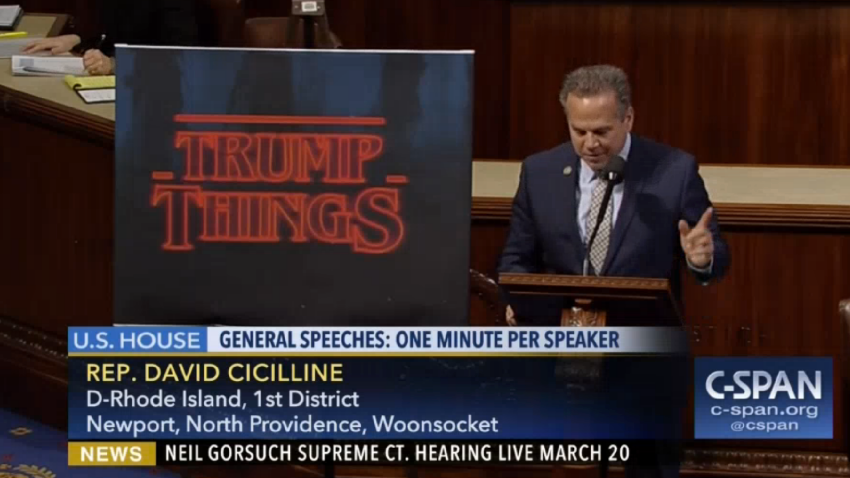 “Mr. Speaker, like the main characters in Stranger Things, we are now stuck in the Upside Down.”

Congressman David Cicilline (D-RI) took to the House floor Thursday to talk about the current crisis in President Donald Trump’s administration. He berated former National Security Advisor Michael Flynn’s reported ties to Russia, Trump’s Muslim travel ban, and the refusal to address Flint’s ongoing water crisis. In order to make his point clear, he gave a comparison everyone can relate to: Stranger Things.

“Mornings might be for coffee and contemplation, but Chief Jim Hopper is not coming to rescue us,” Rep. Cicilline told lawmakers, as a Trump Things poster stood proudly beside him. “Like Mike, Lucas, Dustin, and Eleven, we must remain focused on the task at hand and hold this administration accountable so we can escape from our own version of the Upside Down.”

Rep. Cicilline even confirmed with io9 that he’s a fan of Stranger Things and “can’t wait for season two.”

This man just became my new hero. Forget statistics, graphs, or snowballs. If you really want to make a dent, you’ve got to hit politicians where it hurts, with their binge-fests.