A Japanese Effort To Remove Hazardous Space Junk Has Failed 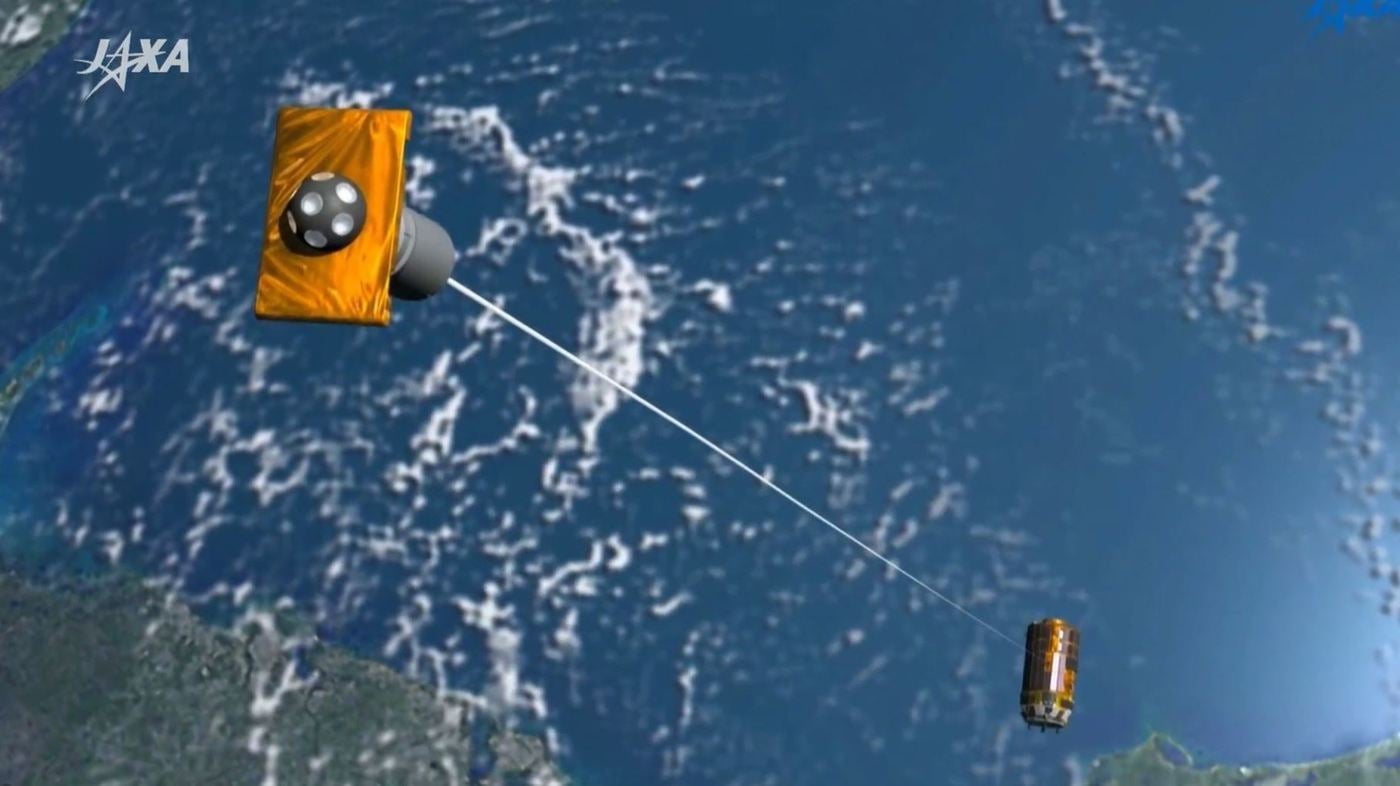 An experimental Japanese mission to remove dangerous debris from orbit has ended in failure. It’s a frustrating setback given the mounting risks posed by the nearly two million bits of junk currently swirling around our planet.


Artist’s impression of how the JAXA system is supposed to work. In tests, the cable did not deploy. (Image: JAXA)

Scientists at the Japan Aerospace Exploration Agency (JAXA) were trying to test an experimental system in which a long cable would be deployed from the Kounotori 6 satellite and directed toward a piece of space debris. Once attached, the tether would slow down the object, forcing it to re-enter into Earth’s atmosphere where it would burn up. The test of the new system got off to a rocky start when mission planners couldn’t even deploy the cable.

The need for an effective space-based garbage removal system is starting to get pressing, so this failure is not just a setback for JAXA, it’s a setback for the global community. There are about 20,000 pieces of tracked debris currently in orbit. But there are potentially millions (yes, millions) of bits of smaller items swirling around the Earth, too. These objects include everything from discarded tools to debris from solid rocket motors, paint flakes and even frozen coolant from nuclear-powered satellites. Whipping around the planet at high speeds, tiny bits of space junk pose a hazard to equipment and human life.

There’s also the risk of a Kessler Syndrome — a runaway chain reaction of collisions. As portrayed in the movie Gravity, the ensuing cloud of debris can snowball relatively quickly, wiping out objects in its path. Frighteningly, a Kessler event has the potential to destroy a significant portion of the world’s satellite fleet.

A number of ideas have been proposed to clean up the mess we’ve made up there, including balloons to slow down objects, kamikaze satellites, solar sails for pulling objects out of orbit and — as the latest JAXA test indicates — an electrodynamic tether to nudge objects into the upper atmosphere.

Under the proposed plan, the Kounotori 6 satellite was supposed to unfurl a 700m-long cable made from thin wires, stainless steel and aluminium. The tip of the tether, equipped with an end mass weighing 22kg, would attach itself to a piece of space debris, such as a dead satellite. The position of the tether relative to the craft could be changed by the use of force that’s generated by an electric current and the Earth’s magnetic field. Once the tether is attached to a chunk of space debris, the object is slowed down and guided into a destructive reentry. The Kounotori craft, which launched to the ISS in December with supplies, would be loaded with garbage from the ISS. Both the craft and the space debris would burn up on re-entry.

At least that’s how it was supposed to go. After days of trying to get the cable to deploy, however, the mission planners had to give up. JAXA scientists had only a week to work in, and they ran out of time. Last night, Kounotori 6 re-entered Earth’s atmosphere.

“We believe the tether did not get released,” said lead researcher Koichi Inoue in a press conference. “It is certainly disappointing that we ended the mission without completing one of the main objectives.”

Disappointing, sure, but certainly not the end of the world. The Japanese effort, though unsuccessful, is hopefully a sign of things to come. Given the risks involved — and the ever-increasing amounts of debris appearing in space — we have little choice but to come up with a viable solution.

[AFP via The Guardian]