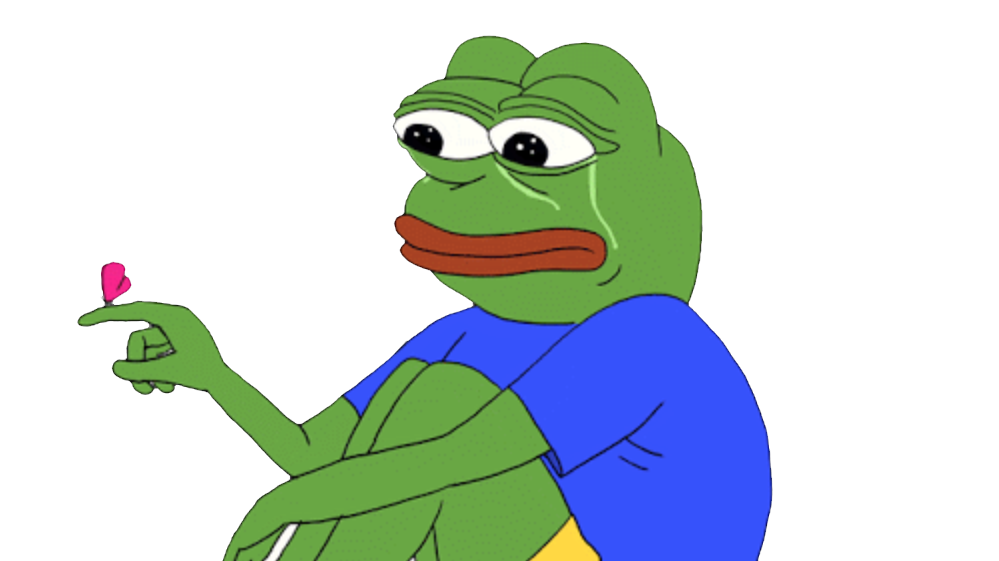 Yesterday Buzzfeed published an incendiary document alluded to in an earlier CNN scoop. The 35-page report, supposedly written by an ex-intelligence agent, alleged among other things, that US President-elect Trump had hired "a number of prostitutes to perform a 'golden showers' (urination) show in front of him" and that Trump had engaged in "sex parties" in Russia. The fallout of this publication is now being referred to as pissgate, and of course, Trump's ardent imageboard supporters are spinning elaborate yarns about its origin.

While the document itself is unverified and was only published — according to an internal email sent to staffers by Buzzfeed boss Ben Smith — in an effort "to be transparent in our journalism" despite "serious reason to doubt the allegations", some are rushing to produce counter-explanations for pissgate. Most loudly, users of 4chan's /pol/ ("politically incorrect") imageboard are trying to get to the bottom of it.

To recap: /pol/ is the same imageboard where pizzagate was first created, and the same group of people who long alleged that Julian Assange was either assassinated or captured by the CIA. But the latest /pol/ conspiracy doesn't just seek to explain away PEOTUS's alleged piss fascination — it attempts to take credit for it.

One of many threads posted yesterday pointed to an archived thread dating back to November. Four posts within that archived thread — all using the same user ID — were from a 4chan user claiming he or she had leaked false information to Rick Wilson, a GOP political strategist. The posts make no mention of any details specific to pissgate and Rick Wilson is not mentioned in either the Buzzfeed or CNN pieces. Could anyone be gullible or desperate enough to believe a single amateur had hoaxed the CIA with bad intel? Another thread titled "/pol/ literally trolled their way into an intel report" appeared last night, so you be the judge. 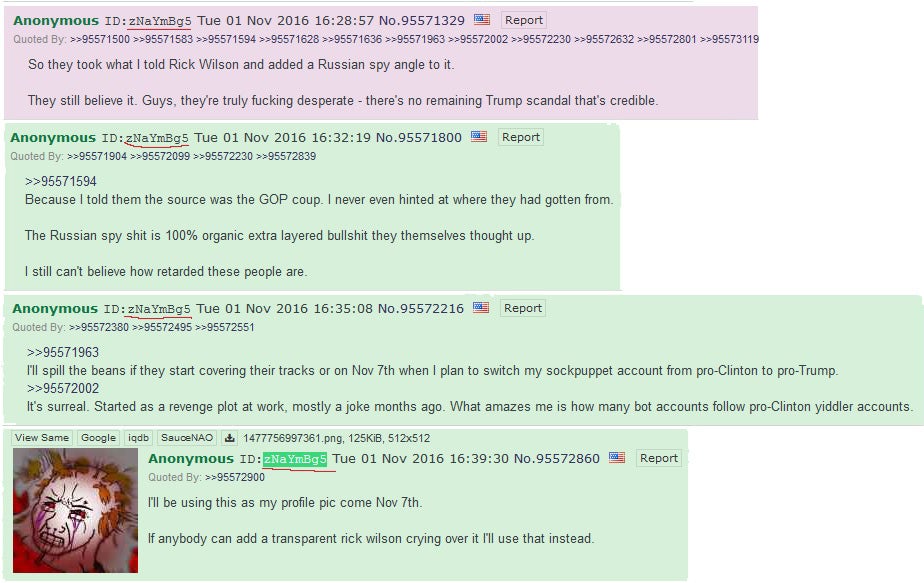 Image: a composite of the four archived posts/ 4chan

How did this supposedly false dossier get from the hands of Rick Wilson and onto the front page of nearly every news outlet? According a very dull chain of events dreamed up by /pol/, Wilson gave the documents to Evan McMullin — a former CIA officer who ran a lacklustre independent campaign for US president last year — who then for some reason gave them to Senator John McCain, who sent them to government intelligence agencies, who then leaked them to the press to intentionally hurt US President-elect Trump. Hmm. Makes you think. 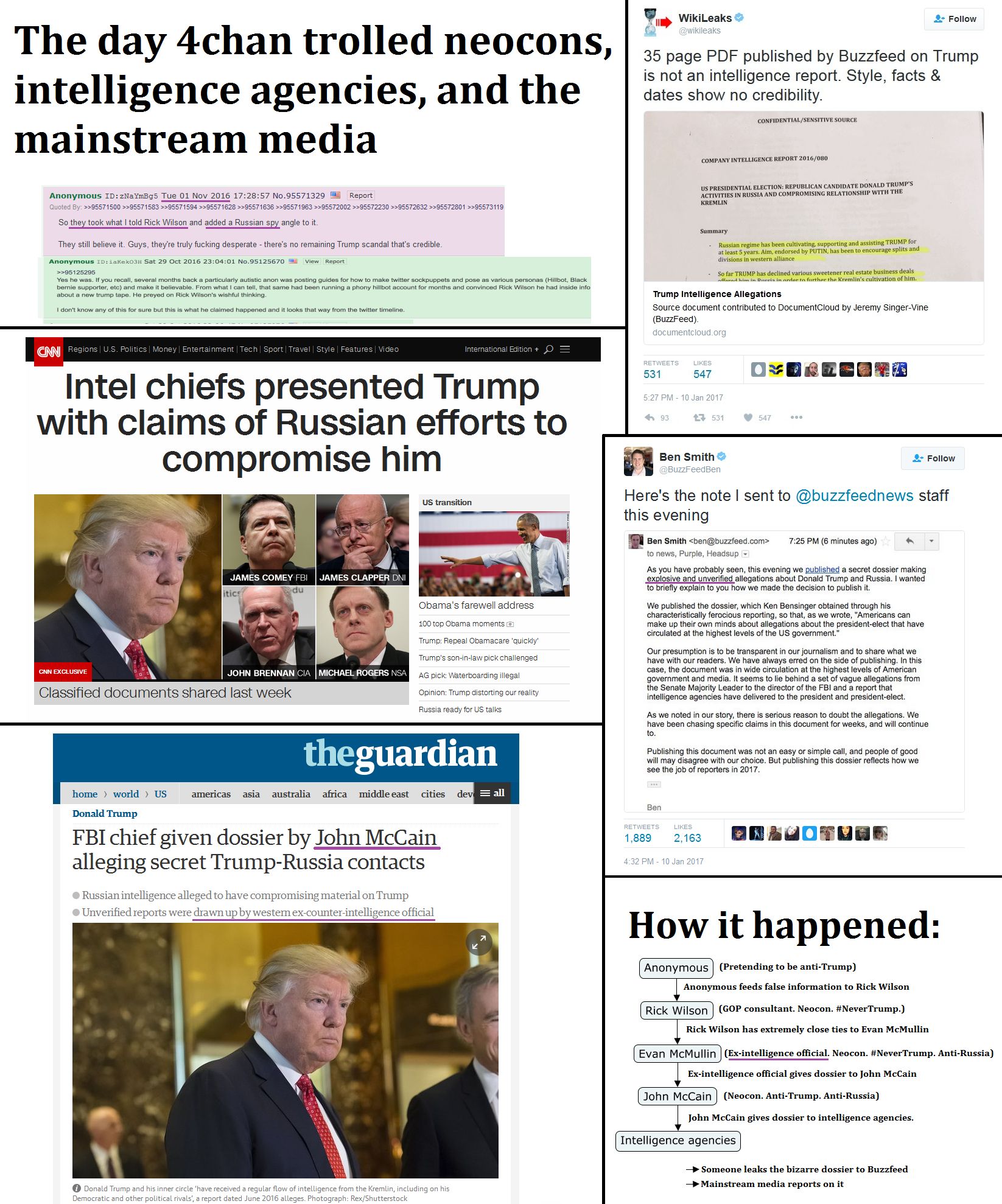 Besides offering no proof this chain of events occurred, there's one gigantic hole in this scenario: Wilson has denied any involvement in the strongest terms. "I release ANY journalist I've talked to about Trump from any off-the-record/background protections of anonymity," he wrote in a Medium post this morning. "Why? Because the first time I saw the memo was when BuzzFeed published it." He also wryly points out that the timeline of events doesn't add up:

If you believe the Russian/4chan spin that this information came from them, you can't use a calendar, or common sense. This information on Trump's various personal and business dealings in Russia was being pursued by major campaigns and by major media to my knowledge as early as late July of 2015, and the "Ritz Carlton" information was out the in the summer of 2016.

Two posters — one on /pol/ itself and another on Twitter — made broad claims about being the mastermind behind the "fanfiction" dossier. The former conveniently mentions that he or she "installed a new OS after the election so I have no proof that I fabricated them". Similarly, @trsprudence continues to talk a good game, with his claim to being pissgate's architect bolstered by rumours within the Trump supporter Discord chatroom Centipede Central.

Why would /pol/ get behind a theory so obviously ridiculous? Besides denying any credibility the dossier might have, a faked document making its way to national and international press feeds into their (and Trump's) narrative that the media are liars. And for an internet community that believes they sent a man to the White House with memes, this is just another feather in their trollish caps.

But the glaring, obvious problem with this dossier being a work of complete fiction planted by Trump supporters is that its publication has done nothing but damage Trump. Surely anyone clever enough to fake intel so believable that it made its way to the top of the political chain of command would have foreseen how these allegations would be counterproductive?

Then again, this self-congratulatory pissgate conspiracy explanation probably has nothing to do with disproving anything in particular. Shrieking the first thing that comes to mind is, after all, how frightened men on the internet calm their nerves.

Intelligence agencies should never have allowed this fake news to "leak" into the public. One last shot at me.Are we living in Nazi Germany?