Which Emotions Are The Most Contagious? 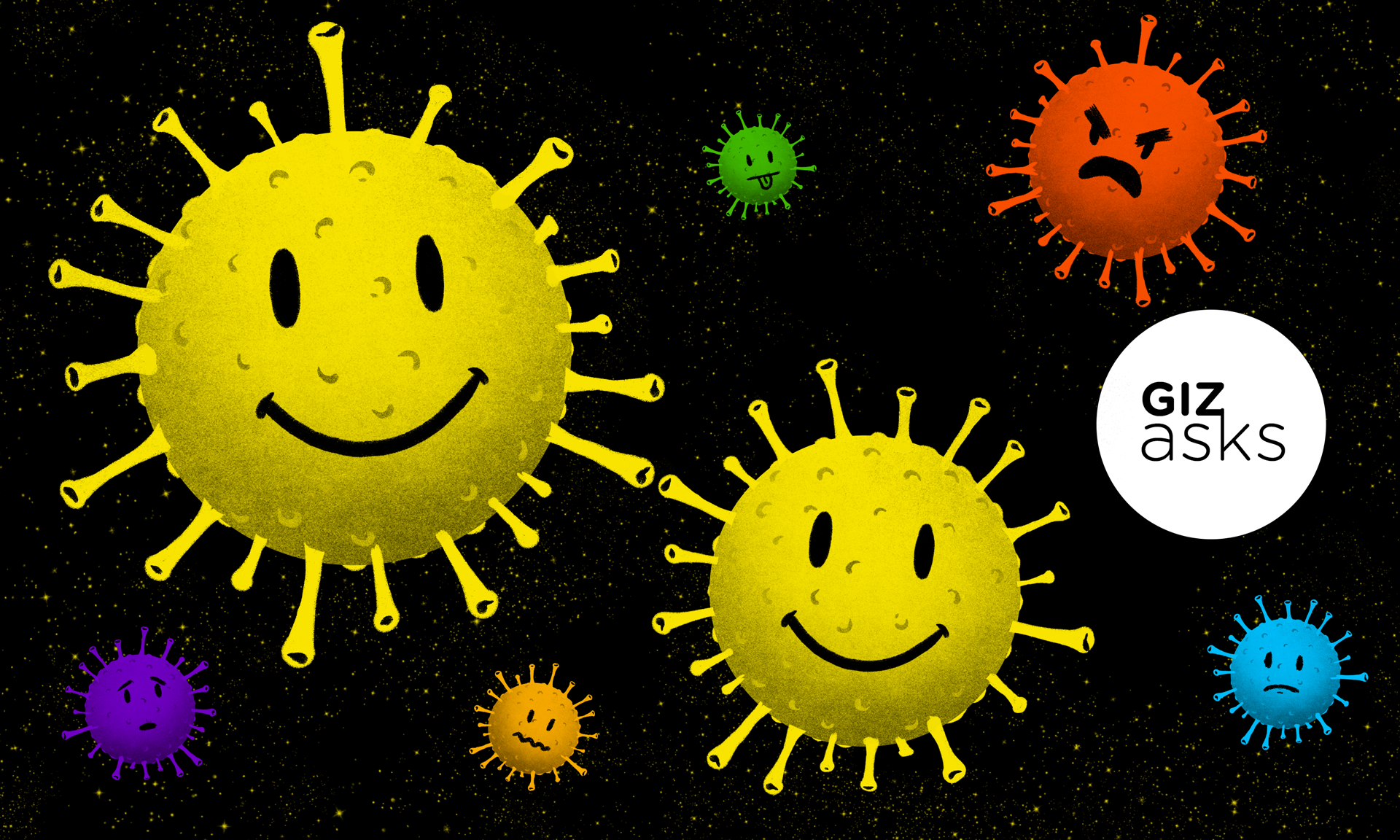 Welcome back to Giz Asks, a series where we ask experts hard questions about science, technology, and humanity's future. Today, we're wondering which emotions are the most communicable, for humans and for other animals. Illustration: Jim Cooke/Gizmodo

We're all intuitively aware that feelings can be contagious. Your grumpy friend always makes you upset. Your neighbour's giggly baby can cheer you up in minutes. But how, exactly, do humans transfer psychological states between one another, often without noticing? If emotions are communicable like diseases, which are the most contagious? We asked animal behaviorists, evolutionary anthropologists, bioethicists and behavioural scientists to enlighten us.

Professor of Bioethics, University of Toronto, president of the Canadian Ape Alliance

Emotions are definitely contagious. It's impossible to give a bullet proof answer, but all indications are that negative emotions are by far the most contagious.

This is not just humans. It's been studied in humans and non-human primates — mostly monkeys and some of the great apes. (And dogs, maybe because they have been living with humans for thousands and thousands of years now.)

There's an evolutionary reason as to why negative emotions are so contagious. If there's a shift in a social hierarchy, if there's anger — it's very important that people or non-human primates are able to pick up that emotional change, so that they will be ready to adapt to the change, or a predator, or fear.

Most of the changes that people go through with an emotional contagion are not in their conscious mind. You may not be at all conscious that your emotions are changing and being influenced by another person. This has a dark side. Positive emotions and generally positive people can have a tremendous effect on people, but the inverse is also true. Depressed people can make their spouses or their partners depressed without them even fully realising that they're becoming depressed in many cases.

People can absolutely become aware of the changes and emotions that they're going through when they're around another person. People can be trained to do this. In psychotherapy, the concept of transference is pretty close to that. A good therapist has to be very very aware of how their patient is making them feel.

The biggest misconception [about emotional transference] is that it doesn't exist. Most people feel that their emotions are unique, that they depend on themselves, their personalities, their thoughts. They have no idea that they may be picking up on emotional changes. They think they're immune from that. Most people enormously underestimate how easily influenced they are in general. Most people don't see ourselves that way. We think we decide for ourselves how we feel about all kind of things, where in fact, we're being changed and manipulated all the time.

Paul Ekman is one of the well-known researchers on emotions. He identifies that there are six basic emotions: (anger, disgust, fear, happiness, sadness, and surprise). Robert Plutchik talks about four pairs of emotions to make eight: joy/sadness, anger/fear, trust/distrust, and surprise/anticipation.

Research does show that emotions are contagious. For example, [in] a research study reported in Psychiatry Research, Barbara Wild, Michael Erb and Mathias Bartels found that when people looked at pictures of sad or happy faces they reported feeling the same emotion. There is quite a bit of research on this.

If you are around someone who is expressing a particular emotion or you see someone's face and/or body expressing a particular emotion, then you will tend to pick up and feel that emotion too. This works most strongly if you are physically with them and/or you see their face/hear their voice, but there is also an effect (not as strong) if you read something they have written (i.e., Facebook post or tweet). The stronger the emotion, the stronger the contagion.

The idea is that mirror neurons in the brain cause us to mimic the facial expressions of others. So when we see a face (in person or in a photo) of someone who is showing an emotion we tend to move our facial muscles in the same way, which actually makes us feel that emotion. Emotions and body expression are two-way. Meaning when you are sad you hunch your shoulders and you move your facial muscles in certain ways. But if you are not sad and you move your body and face as though you were sad, you actually become sad.

In the research study I cited above they found that the stronger the emotion visually displayed, the more contagious it was (and that men and women reacted the same way and the same amount). In that research they only tested "sad" and "happy". Happiness, sadness, disgust, fear, and anger are more easily conveyed, and thus would be more contagious. Some emotions are more complex and are not easy to convey, such as trust, distrust, anticipation and so they would be less contagious.

Professor Emeritus of Ecology and Evolutionary Biology at the University of Colorado, Boulder, Author of Rewilding Our Hearts: Building Pathways of Compassion and Coexistence and The Animals' Agenda: Freedom, Compassion, and Coexistence in the Human Age

I think that many or most emotions are contagious, but for me the two that really grab me are joy/happiness and grief/sadness. I study dogs and when I see dogs playing I want to jump right in, as do other dogs. It's that contagious. I can feel their passion and glee, likely because we're all mammals and share much of the same neural wiring and neurochemicals underlying joy and happiness. Likewise, I can feel when another animal, including a human animal, is feeling down and out.

I once came upon a herd of wild elephants living in the Samburu Reserve in northern Kenya. I hadn't seen many wild elephants before but I could feel their grief. They just didn't look happy and 'up.' I had the pleasure of being there with Dr. Iain Douglas-Hamilton, one of the world's leading elephant experts, and I asked Iain if something was wrong. He told me that the matriarch of that particular group — the oldest female who was their leader and social glue and keeper of traditional knowledge — had recently passed away. And yes, the other members of the herd were mourning and depressed and lost without the wise elder.

I think the most interesting work is on contagious yawning. What we have seen is that across primates individuals will yawn in response to others yawning - but the likelihood of them yawning is linked to their relationship with the individual who yawns. Friends and family of an individual are more likely to illicit contagious yawning than a rival or a stranger unrelated to them. The same seems to be true for humans - I find it fun to watch people in meetings to see who yawns contagiously as a gauge of relationship quality.

If one bonobo screams in alarm another bonobo will also [scream]. It is hard to know why the second bonobo is alarmed. Is it because they saw the threat and also became fearful? Or they simply called in a fearful way reflexively when another group member calls in fearful way, but don't actually experience the fear unless they encounter the threat as well? This is much harder to know.

Responses of fear, anger, disgust, and pleasure all clearly have an important role in the social life of any primate and even have predictable behavioural responses, dedicated facial expressions and musculature. More abstract notions of emotional states like pride, shame, hate, etc. do not really have a morphology or nonverbal behaviour specific to them that would allow us to easily measure in nonhumans (or even non-verbal human infants).

That said, taking my science hat off for a moment, animals definitely fall in love and feel jealousy! And yes, those emotions are contagious.