The Walking Dead Finally Got Its Crap Together 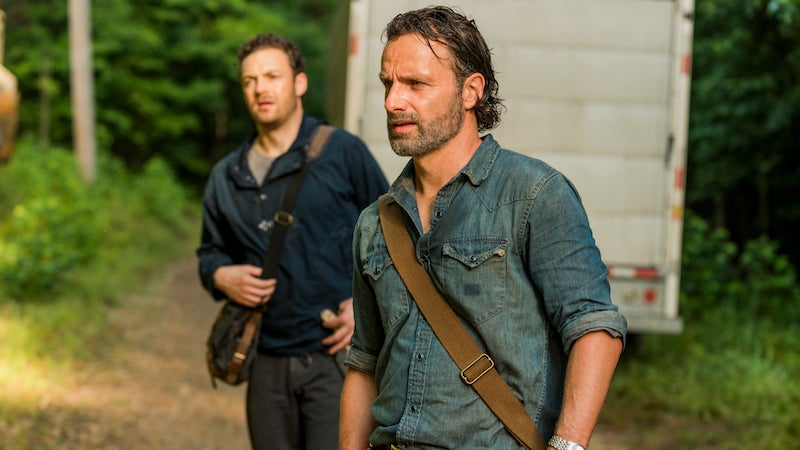 If you've been as bored watching The Walking Dead twiddle its decomposing thumbs this season as I've been, then the mid-season finale was probably equally satisfying to you. It was a pretty low-key episode — with a few violent exceptions — but one that finally got Rick out of his funk and put Alexandria and the other groups on the path to war with Negan and the Saviors.

I get why the show felt it needed to slow things down after the premiere — give time for the characters to feel the repercussions of Negan's arrival, of their subjugation, of making Rick's desire to fight back feel earned — but that doesn't mean it was riveting to watch. With the exception of introducing the Kingdom, which was weird enough that it needed an entire episode, everything felt like it took twice as much screentime as it actually needed.

Which it why it was great and kinda frustrating that "Hearts Still Beating" did most of the things that the show could have (and should have) been doing all season. For starters, it gave a bevy of good moments to its lesser characters: Aaron is rightly miffed at Rick when asked if he wants to skip paddling in a leaky boat to the cabin in the zombie lake, and then talks about how he's OK with the deal Rick made with the Saviors in what seemed to me a passive-aggressive way. Rosita opens up about how she feels like a useless member of the group and thus should have been one of Negan's victims instead of Glenn or Abraham, which is both meta and very effective; Father Gabriel, who has been dispensing good advice all season while still being creepily intense, continues his streak by agreeing with her that Negan needs to die, but she doesn't need to throw her life away in the attempt. Even Spencer has a good moment when Rosita catches him bringing a bottle of booze to Negan in hopes of ingratiating himself and forming a relationship that he can eventually use to improve the lives of the Alexandrians. She tells Rosita he thinks it's what his mum would have done, which is probably true.

Of course, part of Spencer's plan is telling Negan that he should be in charge of Alexandria instead of Rick, because Rick is crazy and will inevitably try to cross Negan, which is definitely true. Alas, the cruel irony of Spencer is that even when he's 100 per cent correct, he's still an enormous douchebag. Negan takes offence at the cowardly way Spencer is trying to take over — instead of just killing Rick himself — and spills his guts out on the streets. This is when Rosita decides to be stupid and tries to shoot Negan with her one bullet.

To be perfectly fair to Rosita, she was standing right in front of Negan with no one in her way. Also, the fact that Negan somehow blocked the bullet with Lucille is as unlikely as it is ridiculous. Still though, given that Alexandria was still full of armed Saviors at the time, who knows how many people would die in retaliation, which seems like a Pyrrhic victory at best. As such, it's a minor miracle that Negan only has poor Olivia murdered in retaliation.

Of course, it's only the fact that Negan recognises the bullet casing as homemade which stops him from murdering others, because he wants the person who made it. Although terrified, Eugene admits it was him before Negan starts killing more bystanders, even though he knows full well Negan is going to drag him off to be his one-man ammo factory. One hopes that Rosita feels extra-terrible for calling him a coward last episode, especially when her "act of courage" got people killed, and his saved people's lives. 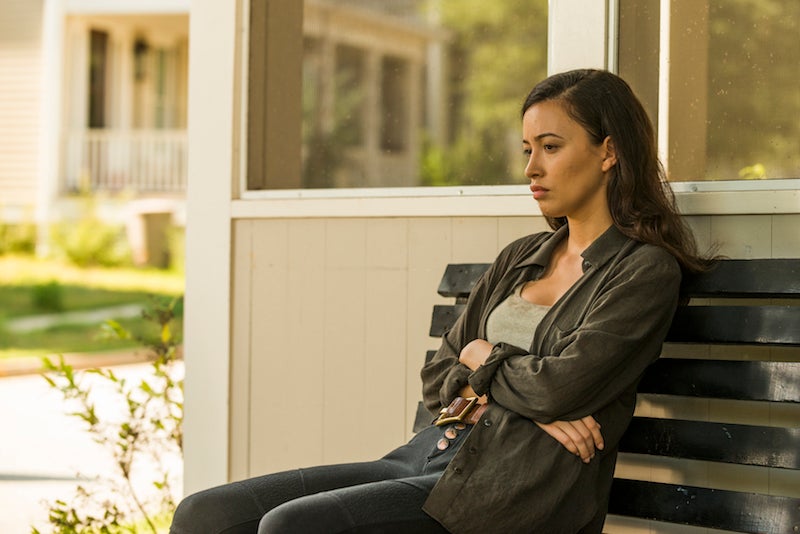 Rick finally returns just in time to see Eugene dragged away, Olivia dead on his front porch and Spencer gutted in the street, and Negan greets him with, "How about a thank you?" It's perfect, because in Negan's mind he's completely right: Rick's son did attempt to kill him and killed two of his men in the process, but he dropped Carl off at Alexandria unharmed; one of Rick's people tried to kill him again, but Negan only killed one person in turn; and Spencer did try to overthrow Rick, but Negan took care of him. Given what Negan did to Oceanside, he's practically magnanimous in leaving without doing more harm.

Somehow, these deaths are even more horrible than Glenn and Abraham's. It all goes back to that damned raid on the Saviors' compound. Glenn and Abraham were there, they knew what they were doing, and they made their choices. I'm not saying they deserved to die, but they knew the score. Likewise, by trying to kill Negan, Carl and Rosita had accepted their deaths. But Olivia was as innocent as anyone on this show. Even Spencer, douchebag though he was, genuinely (and quite reasonably) thought Rick had screwed over the town by tangling with the Saviors in the first place. I don't think he was trying for a power grab as much as he was doing what he thought would be most likely to keep Alexandria safe. He tried to work with the Saviors, but Negan killed him, too.

So when this makes Rick realise there can be no peace with the Saviors, it actually feels like Rick's the good guy again. Rick didn't want to fight them, but even when he tried to play by Negan's rules, people still died — innocent people. So when Rick and the others fight back in the second half of the season, it's not going to be tainted by their belligerent, hubristic compound raid. (Or at least not as much.)

All this is augmented by a speech that should have come much, much earlier in the season, when Richard (the knight) implores Morgan and Carol to convince Ezekiel to fight the Saviors before things go bad. Like Alexandria before the compound assault, the Kingdom hasn't technically been attacked by the Saviors yet. But Richard makes a far more compelling case for a preventative attack than Gregory and Hilltop ever did:

Right now we have peace with the Saviors, but sooner or later something's going to go wrong. Maybe we'll be light on a drop. Or maybe one of ours will look at one of theirs the wrong way. Or maybe they will just decide to stop honouring the deal. Things will go bad... I know what the Saviors are and I know what they do. And I know they cannot be trusted.

Even then, Morgan and Carol are still reluctant to talk Ezekiel into starting a war. (Carol actually tells everyone to get the hell off her lawn). But that's good — making a concerted effort to murder a bunch of bad guys is something that should be approached with reluctance. It shouldn't be done for a pile of vegetables.

The end of "Hearts Still Beating" is one of the more… I won't say moving, but one of the more satisfying scenes The Walking Dead has produced. Rick, Michonne, Carl, Tara and Rosita come to Hilltop, where Maggie spots them. Having been separated in the premiere, they all reunite, including Sasha and Enid — even Daryl, who used his key and Jesus' help to escape Sanctuary. All the close-ups on smiling faces were silly, but if you weren't moved by Rick and Daryl's tearful man-hug, I mean come on. Seeing them all come together again, knowing they're going to take on a common enemy, and that their fight is finally justified… well, I just wish this moment had come two or three episodes ago.

Now the question is if The Walking Dead will continue spinning its wheels in the second half of the season, or, now that the denouement of WhoDoesNeganKillGate is finally, truly over, if it will use this as the starting point of its true new chapter. I'm actually optimistic. TWD often alternates between slow and fast, so things are due to speed up. And I truly think that the show's dropping (but still incredible) ratings will rouse the showrunners out of their stupor. They'd gotten cocky and paid for it; now they're ready to do things right. Go figure.

Of course, they still have to get the Kingdom involved. And as Michonne has seen first-hand, the Saviors' compound is huge and Negan's army vast. And the Alexandrians have no weapons. And Eugene, the only person who could have made them bullets anyway, has been taken.

But on The Walking Dead, nothing good ever comes easy. Even for the viewers. 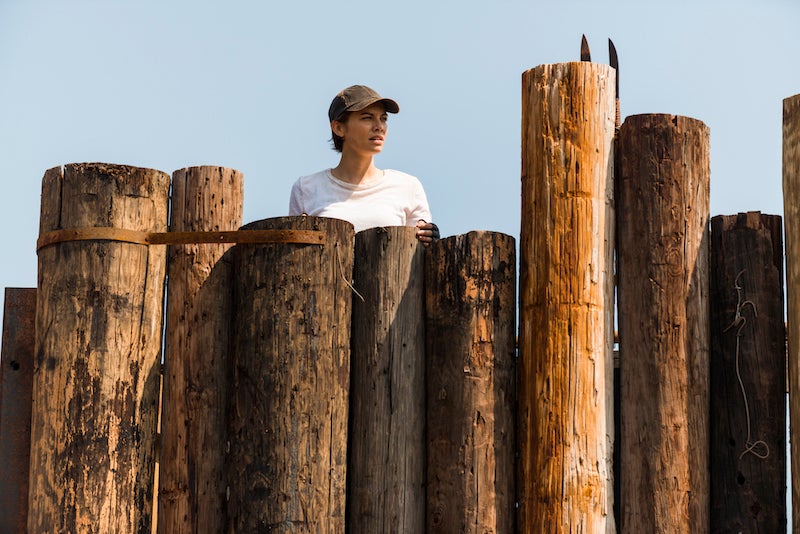 • I have no idea why, but Jeffrey Dean Morgan as Negan looks far more sinister shaved than with a beard.

• That said, Negan playing "Leave It to Beaver" with Carl will never not be funny to me. I bet Negan makes a good spaghetti sauce, too.

• Everyone at Hilltop loves Maggie and Sasha and hates Gregory. I know this is going to end badly for everyone, but it's still funny watching a Hilltopper browbeat Gregory into giving Maggie an apple, whether she actually wanted it or not.

• Uh, was the person with the boots watching Rick and Aaron loot the houseboat? There was apparently an after-credits scene with him/her/it that my recording cut out. Feel free to describe in the comments.

• The Savior that Michonne took hostage decides to let Michonne kill her, even telling her there's a silencer in the glove compartment. I assume this means that life under Negan is so unbearable she's OK dying, but it seems like Michonne could have taken her hostage or something, right?

• Likewise, I suppose Daryl could have let Fat Joe go, but Daryl had some crap to work out.

• Hey, I thought Jesus had left with Negan's convoy to Alexandria. Why was he there to help Daryl?

• I've knocked The Walking Dead a few times on VFX this season — and Maggie's standing in front of the Hilltop mansion looked pretty fishy — but Spencer's guts spilling out of his stomach when Negan knifed him was great.

• Uh, did you guys see that crazy spike zombie at the end of the "next on The Walking Dead" preview? That thing looked like it was out of Resident Evil.