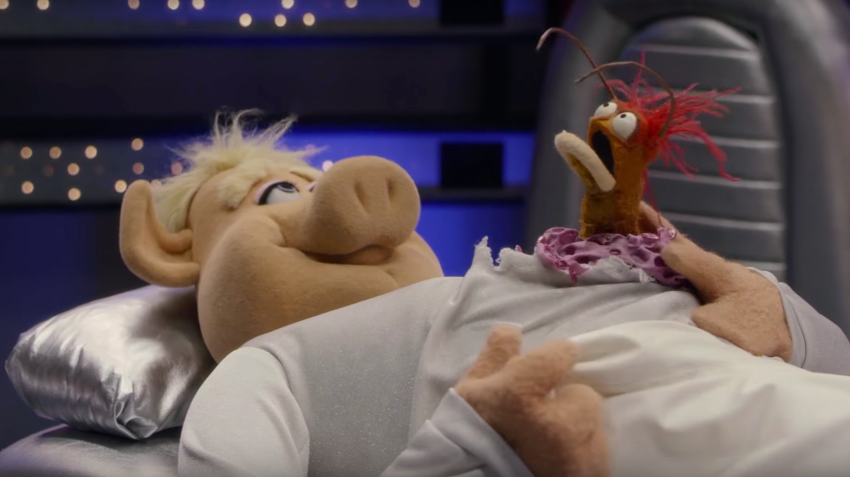 Just in case a show that gave Fozzie an inter-species relationship, mocked Miss Piggy for her weight and gave Animal side chicks wasn't adult enough, The Muppets are back in a recreation of one of the most messed-up moments in science fiction movie history. Yippee?

The Muppet Show's iconic space opera "Pigs in Space" is now on YouTube with the first episode in about 20 years, a parody of Alien called "Guess Who's Coming to Dinner." Spoilers, it's an alien.

Specifically, Pepé the King Prawn, who comes bursting out of Captain Link Hogthrob's stomach in a blaze of pig guts glory. Let me repeat that: A Muppet prawn alien bursts out of a pig's stomach. I've seen some things...but nothing prepared me for the image of Pepé circling around in a Muppet's entrails like it was the swimming pool from Poltergeist. Hey, that's kind of like how the actors of Alien weren't prepared for how Ridley Scott scarred them psychologically.

The short episode also features a squid alien face-humping Captain Link, which is clearly a nod to the face-hugging alien in Alien. But again, no part of me wanted to watch a sentient alien hump Link's face while telling the doctor that impregnating the captain's stomach with his prawn spawn is "none of your business." But hey, at least the captain calls Miss Piggy a hussy, after she's introduced in the credits as gluttonous. No shaming is too much shaming for Miss Piggy, I guess.

Don't get me wrong, it's awesome to see "Pigs in Space" again. The show was one of my favourite parts of The Muppet Show, especially the episodes where they mocked gender stereotypes in science fiction. In the original series, Captain Link continually belittled Miss Piggy despite her being a capable member of the crew, which reminded me a lot of early sci-fi shows and films. Too bad the latest reboot has basically regressed to calling her a fat slut.

Muppet Treasure Island director Kirk R Thatcher co-wrote and directed this and at least three other episodes of the "Pigs in Space" miniseries at YouTube Space LA last year. The next one will be released later this year, and it's a parody of Gravity starring Sandra Bullock and George Clooney.