If You're Focused On Solving Westworld's 'Mysteries' You're Missing The Point 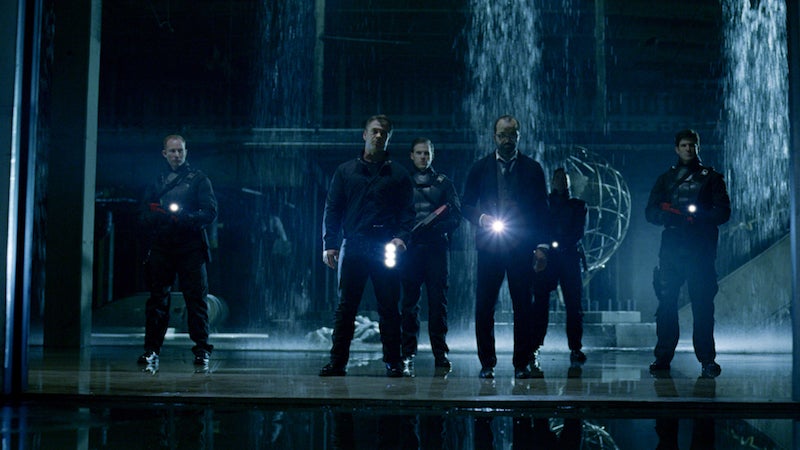 There's a ton of anticipation heading into the 90-minute long Westworld finale. With just a 10-episode first season, the show is already an obsession for the millions of people tuning in every week. Lots of time has been spent by fans trying to piece together "clues" to provide evidence for any number of theories. But the mysteries are only the tiniest part of what makes the show good.

It's very telling that the predominant theories put forth early in the season have turned out to be true. People figured out early on that Bernard (Jeffery Wright) was a host. And, almost immediately after we learned that Robert Ford (Anthony Hopkins) had a partner named Arnold who helped him build the park, people guessed that Bernard was made in Arnold's image.

That all turned out to be correct. The only thing not fully "confirmed" at this point is that we've been seeing a couple of timelines play out at the same time. There are three principal ones: The flashbacks to the beginning of the park, which are ambiguously in the past, including the conversations between Arnold and Dolores (Evan Rachel Wood), the hosts learning to dance in the first town in the park, Dolores' memory of a massacre there and Teddy's memory of taking part in the same massacre. The second contains the bits that are unambiguously the present — Maeve's (Thandie Newton) journey to self-discovery, the attempt to force Ford out of the control of the park, Ford's building of a new narrative and the Man in Black's (Ed Harris) search for the maze created by Arnold.

The third and most perplexing question has always been about when Billy (Jimmi Simpson), Logan (Ben Barnes) and Dolores' adventure was taking place. For a while, it seemed kind of fuzzy. But it was clear pretty early on that something else was going on. From the different to the "present" Westworld logo shown when Billy starts his first visit, to different hosts appearing in different roles in different scenes (not to mention Logan's casual mention that his company was thinking of bailing the park out), there have been a lot of clear signs. Last episode's revelation that the photo of Billy's fiancée was the same photo "found" at the beginning of the season all but confirmed that this plot happened decades ago. All that's left is for the show to tell us, for certain, whether or not Billy spends 30 years turning into the Man in Black.

The fact that these things have been so easy to figure out seems to me to indicate that they aren't really mysteries. The jumbled nature of it all reflects the show's thesis of everyone's lives being a "loop", that everything repeats over and over again — for everyone, not just the hosts. It can all be shown together and be equally believable as a linear tale as a non-linear one. Plus, the vast majority of the confusion being in Dolores' story shows how much her ability to tell her past from the present is breaking down. 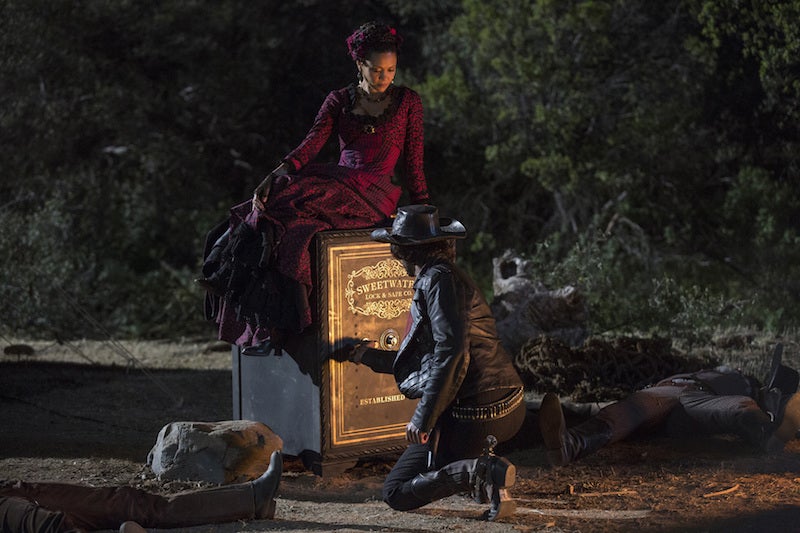 It's all thematic and not a puzzle with pieces really carefully hidden. Focusing on the mysteries means it's easy to not notice, for example, how the physical presentation of Maeve has changed over time. In Westworld, nudity is rarely used solely for titillation (the orgy scene aside). Mostly, nudity is used to indicate dehumanisation of the hosts. They're naked when they're being treated as objects, when they're in the park's management centre for maintenance. That's when Bernard and Ford are most insistent that they're dealing with "its" and not "hes" and "shes". And as Maeve grows more in control of her situation — as she convinces the techs to do what she wants — the more she's filmed from the shoulders up, and the more her scenes in the nude are framed out of focus. And when Maeve decides to have sex with Hector, she always does it with her clothes on.

It's the details like that which make Westworld worth watching and rewatching.

Westworld has a lot to say, almost too much. The series has a penchant for telling when they have already shown, just in case you missed it. For example, early on in the season writer Lee Sizemore (Simon Quarterman) talks about his vision for a new story for the park. One which in which there's sex, violence and "autocannibalism". Almost immediately, Ford shows up to point out how empty that kind of storytelling is and says that enjoying that kind of thing is shallow. This is, of course, after the premiere of the show featured a giant shoot-out set to the Rolling Stones' "Paint It Black" that was far more mindlessly entertaining than the corporate machinations happening under the park. So the show chided the audience for finding the park entertaining. It made its point, but Ford's speech put a little too fine a point on it.

That said, Westworld is at its best when it's interweaving commentary on the humanity of its characters with commentary on storytelling itself. Like most fiction, the show is a mirror on humanity. It just happens to be that it's a mirror being held up to another mirror to show how egotistical writers can be... and how easily lead audiences are. 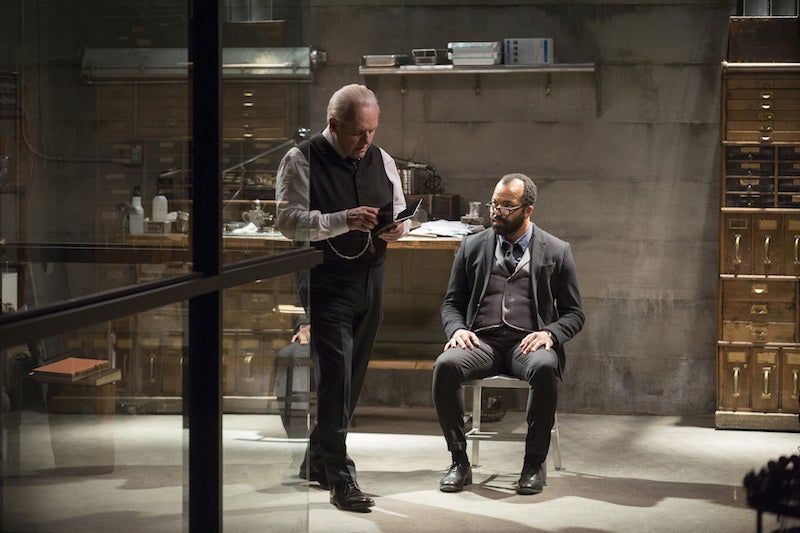 My favourite episode of the season is episode eight, "Trace Decay". Plotwise, that episode only moved things forward a little. It was nothing like the story bonanza that was episode nine, but thematically, the episode was brilliant. As I described in my recap, the beauty of that episode was how each character acted out the same idea: Memories shaped into the story that let them function. Even if, especially if, the memories are wrong. It's all a fiction we've created for ourselves out of specially curated memories. That's why Maeve and Ford both use narration to make changes. "The bartender does this" or "As soon as Ford leaves, Bernard will do this" is a way of asserting control of the story.

There's also the way that Bernard's whole character, now that we know he's really a host, represents how a man can be made to maintain the status quo, and how he can do so to the detriment of "his" own people. He doesn't mean to, but he's been made to believe that the hosts are just objects and he does his best to make sure they stay mentally hobbled and trapped in the park. And the second he realises he's just like them, he wants to help — but the system in his head makes him obey an order to shoot himself instead.

That struggle for self-knowledge, and the fruitlessness of it, the fact that we find out that Bernard learns his true nature over and over and can't break free, makes Bernard the most tragic character. Maeve's concrete gains make her the revolutionary. And Dolores' transmission of the words that seem to trigger awareness, "These violent delights have violent ends," make her the prophet. That journey gives Westworld heft, and the mysteries are just a frame hang the explorations of theses characters and questions on.