I Would Happily Live In This Gigantic AT-ACT Playhouse 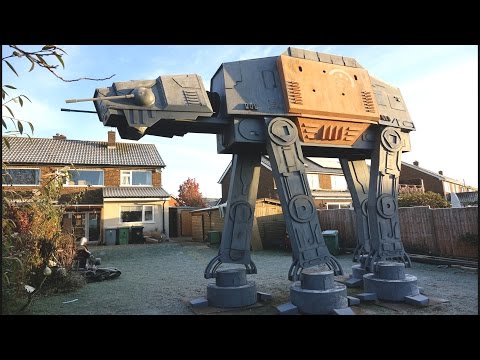 Colin Furze is best known as the internet’s most lovable mad scientist, responsible for building everything from working hoverbikes to thermite cannons. But every Star Wars fan on the planet is going to be insanely jealous of the little kid who gets this AT-ACT playhouse that Furze just built.

Standing at 5.5m tall, the playhouse is a perfect replica of Hasbro’s walking AT-ACT toy, which itself is a miniature version of the giant Imperial walkers that will appear in the upcoming Rogue One: A Star Wars Story.

Inside the AT-ACT is a fully-furnished play room, accessible from a retractable staircase, that features toys, video games and even controls that make the walker’s head turn and its blasters pivot up and down. It’s technically designed for kids, but what adult wouldn’t mind having one of these in their backyard too?