This Star Is The Roundest Celestial Object Ever Measured 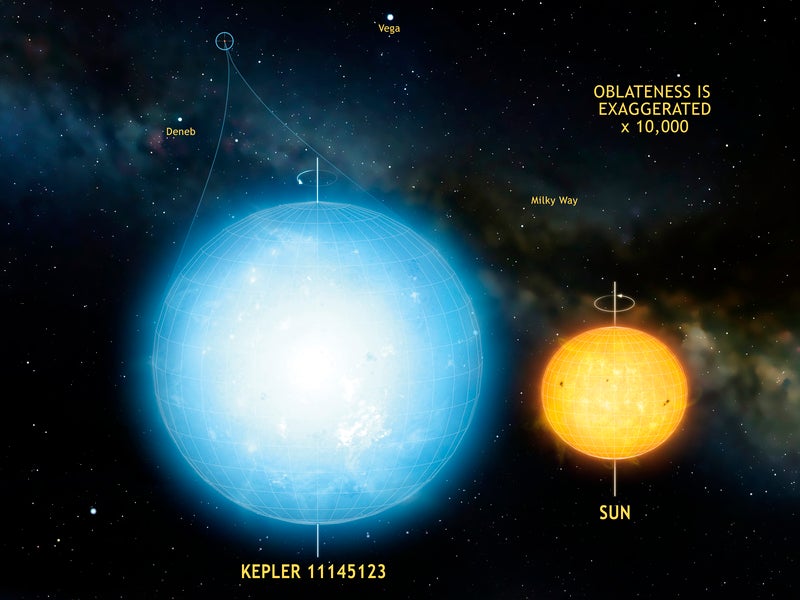 Stars are not perfect spheres owing to centrifugal force. But there's a star about 5000 light-years from here that scientists now say is the roundest natural object ever measured in the universe.

A new study published in Science Advances identifies the star Kepler 11145123 as being the most spherically symmetrical object ever observed in space. A team led by Laurent Gizon from the Max Planck Institute for Solar System Research measured the shape of this star using a new technique that detects the way a star periodically expands and contracts from our vantage point. By tracking these oscillations, scientists can infer the shape of a distant object with extreme precision.

As stars rotate, they become flattened by centrifugal force. The faster a star spins, the more oblate it becomes at the poles, while the equatorial region bulges outwards. But Kepler 11145123 spins excruciatingly slowly (about three times more slowly than our Sun, which rotates once every 27 days), resulting in very little outward gravitational pressure. Using data collected by the Kepler Space Telescope, Gizon's team showed that the difference in radius between the equator and the poles is only 3km, give or take about 800m.

So sure, it's not a perfectly spherical object, but let's put this into perspective. Our Sun has a radius at the equator that's 10km larger than the poles. The Earth is particularly pumpkin-like, featuring a difference of 21km. What's more, Kepler 11145123 is twice the size of our Sun, making the scant 3km difference all the more remarkable.

Gizon's team has compiled a list of other potential super-spherical stars, and they plan to use their new technique to measure them as well. It will be interesting to see how long Kepler 11145123 stays in the record book as the roundest known object in the universe.