This Is A Real Graph From Thomas Friedman’s Latest Book 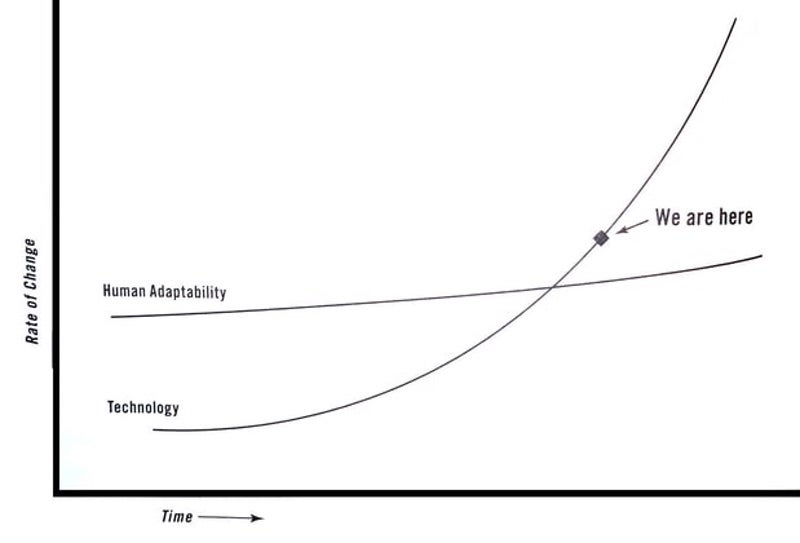 I haven’t read Thomas Friedman’s new screed, Thank You For Being Late. But if this graph from the book is any indication, I wouldn’t learn much from it. Yes, that graph above is real. And yes, it’s completely meaningless.

Friedman’s basic argument is not new. Quite to the contrary, it’s the premise of every techno-reactionary argument put forth since the Industrial Revolution. It’s also the exact premise of the 1970 book Future Shock by Alvin Toffler: Technology is changing too rapidly and humans simply can’t cope with it.

I’ve written numerous times about how silly these arguments about humans not being able to cope with technological change are. They’re almost always written by old men who worry that the world is now moving too quickly. This perspective can often be chalked up to generational divides, but young people aren’t above believing this message. What was Toffler warning about? Information overload because too many books were being printed. Oh dear!

The truth is that technological adoption isn’t necessarily speeding up. Just look at consumer goods like television. In 1950 just eight per cent of Americans had a TV. Four years later, in 1954, a whopping 59 per cent of American households had a TV. Here we are on the cusp on 2017 and I’m having a hard time thinking of any consumer technology that made any comparable jump since 2012.

Or let’s go back further. The Great Depression was a desperate time for many people. But technological leaps didn’t stop. Look at the mechanical refrigerator as another example of rapid change in a relatively short period of time. Just eight per cent of American households had a fridge in 1930. By the end of the decade roughly 44 per cent had one. People much smarter than myself have argued that refrigeration did more to shape the United States than most other technologies of the 20th century. Yes, smartphones are revolutionary. But refrigeration tech arguably changed the US — and the world — as much, if not more.

But let us return to Friedman’s graph. What does he see as the solution to this new future shocked wine in an old future shocked bottle? Learn faster and govern smarter. Now, why didn’t I think of that? 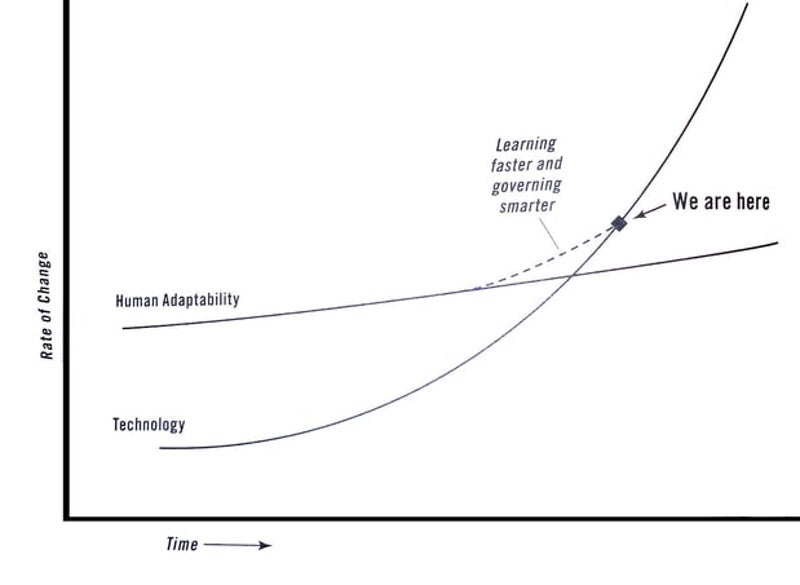 As Taibbi points out, if we take the second graph literally there must be some sort of time travel involved. But again, that’s strangely the least of our problems if we’re trying to decipher Friedman’s argument.

Friedman isn’t the first nor will he be the last to argue that humans simply can’t handle the pace of technological change. It’s so ingrained into our thinking that to question it is seen as antithetical to common sense. But when you take a deep breath and look at the rates of change in the 19th and 20th centuries, there’s nothing to suggest that technology is moving too quickly for humans to adapt.

Political and social change might be another argument entirely. Destructive things like military coups and positive things like progressive Supreme Court decisions can change people’s lives overnight. But even those take time to build and move into place. And technology can’t be divorced from society as having a role in all of it.

But this fixation on technology as moving too quickly for humans to properly adapt is nonsense. And when it’s done in such ridiculously bad graphs we get a peek at how weak the techno-reactionary argument really is.