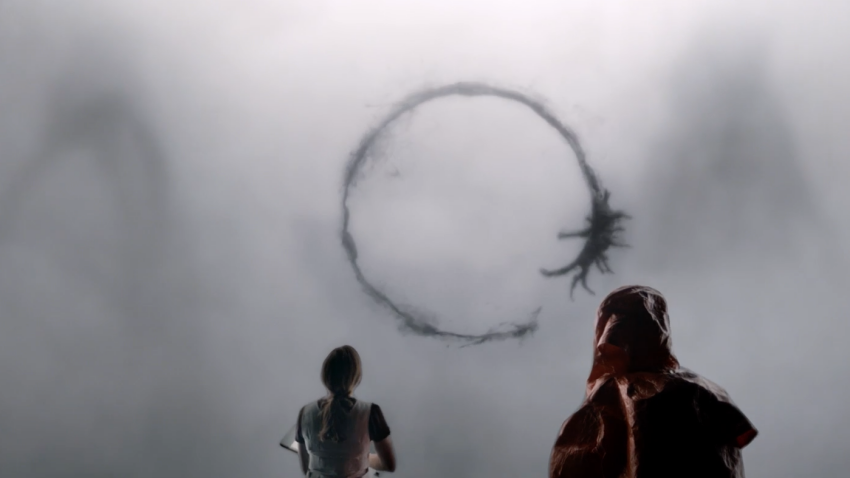 Like many of us who are suffering from Post US Election Stress Disorder, I went to the movies this week and saw Arrival, the new sci-fi Oscar contender starring Amy Adams. If you haven’t seen it, stop reading right now and go check it out.

If you have already checked out this film, stay here and let’s chat about the coolest part of the movie… and why it guarantees I’ll absolutely be watching it a second time.

Time. It’s one of the most constant things in our lives, and yet Arrival gives us a reality in which time is relative. It’s statistically shown that language can change our thinking patterns, but this movie postulates that language can actually teach you how to experience time in a non-linear fashion. This isn’t time travel, it’s Star Trek: Deep Space Nine. We see Adams’ character, Dr. Louise Banks, existing both inside and outside of time, seeing what has been and what will be almost simultaneously.

The movie presented some interesting ideas, but it actually left me with a lot of questions. Some I think I’ve answered in my own thought-gathering (which I’ll share), some will warrant a second viewing, and others may just need to be addressed in fan fiction. I’d love to hear some of the things you guys have gathered from the movie too, and what they say about the film’s larger universe.

1. How were the heptapods so easily able to understand our language? When Louise spells out “Human” and points to herself, Abbott and Costello are immediately able to recognise what that means and replicate it in their own language. That seems a little convenient, right? Unless, the aliens already know our language. Since they experience a non-linear version of time, they likely already understand how we speak and spell, because they have already lived through it. It’s similar to how Louise is able to transfer a message from her future self into her past. If that’s the case, the aliens are simply going through the motions until our dumb asses get on the same page.

2. What’s up with Forest Whitaker’s accent? Where is he even supposed to be from?

3. Can Louise change anything about her life? Louise has technically already done everything that we see her doing since it’s happening both in and out of time, in the past and the future. So, is Louise destined to have already made all of her own decisions? And, by that regard, does she simply have to resign herself to never feeling in control of her choices ever again? It’s the free will versus predestined debate, and there are arguments for both.

4. Are other people experiencing non-linear time like Louise is? If they have access to the whole language, that would be a possibility, and it seemed like China’s General Shang had an understanding that what he was telling her in the future would affect them in the past. So, is our entire society now faced with the decision whether they want to learn an alien language and completely change how they see time, or avoid it and stay linear? That would cause a huge rift and could tear apart society more than the spaceships did.

5. Did Abbott know when he was going to die? Cause if so, that would suck.

So, what kind of questions did you have after seeing the movie, and do you plan on seeing it again?