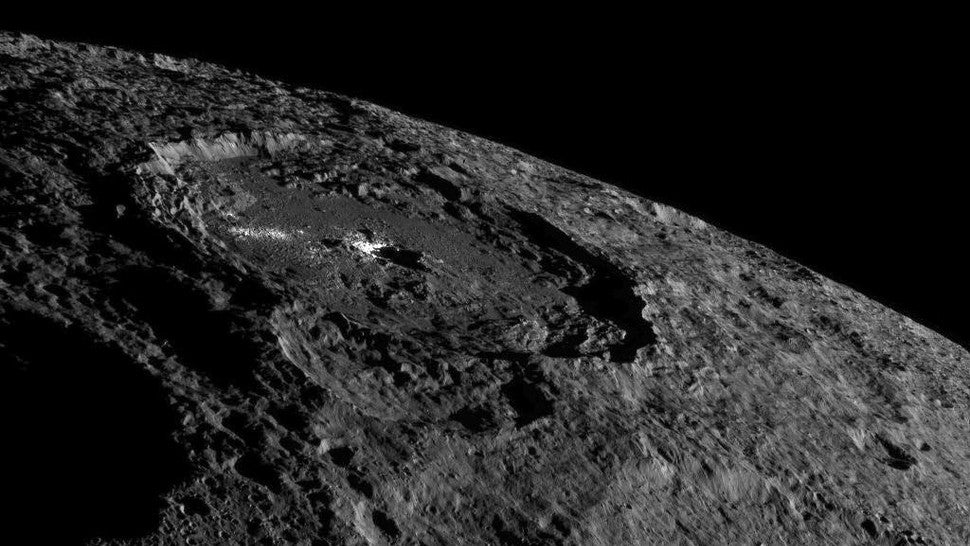 Swooping by at a unique angle, NASA’s Dawn space probe recently captured some of the clearest views yet of dwarf planet Ceres, including Occator Crater and its intriguing bright surface features.


Occator Crater at a distance of 1480km. (Image: NASA/JPL-Caltech/UCLA/MPS/DLR/IDA)

Dawn’s latest orbit, its fifth since arriving at Ceres in the autumn of 2015, took it to within 1480km of the dwarf planet, and at an angle where the Sun’s position was different than during previous orbits. The new images are offering fresh perspectives of this remarkable object and the strange geology responsible for its distinct surface features. 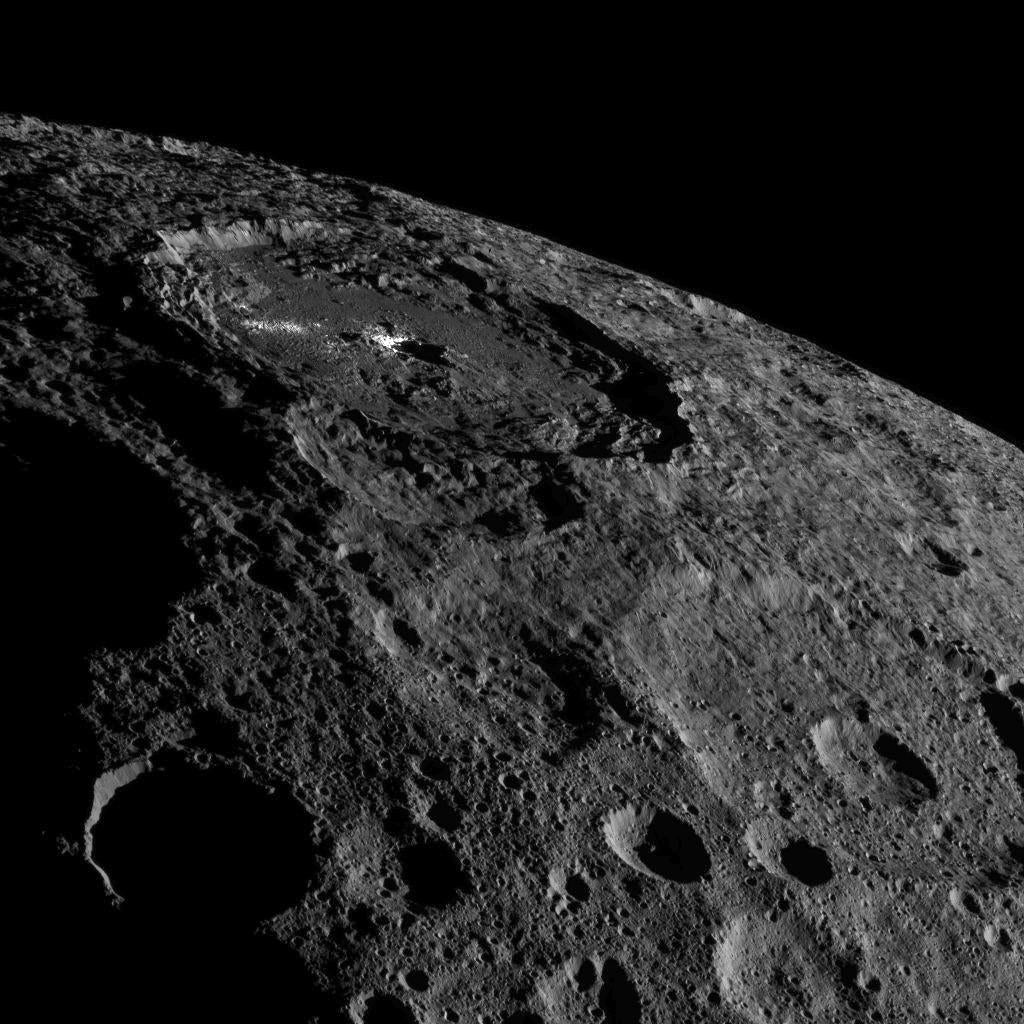 One of the brightest areas on Ceres can be found within Occator Crater, a hole measuring 92km wide and 4km deep. Astronomers believe that the bright material at the centre of this crater is made up of salts left behind after briny liquid seeped up from below, froze and then sublimated, meaning it turned directly from solid ice into vapour. An asteroid impact likely triggered the upwelling of the salty liquid.

During the month of October, Dawn snapped thousands of images of Ceres at its 1480km orbit, many of which can be seen in this new NASA gallery. 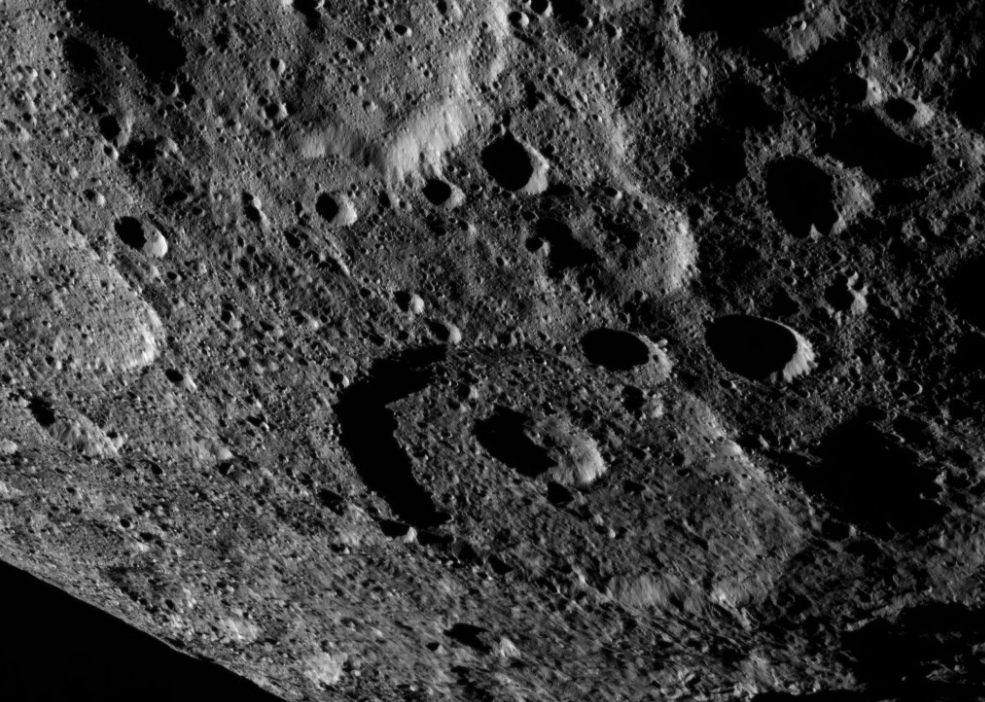 NASA’s Dawn took this image on Oct. 17 showing the limb of dwarf planet Ceres shows a section of the northern hemisphere. (Image: NASA/JPL-Caltech/UCLA/MPS/DLR/IDA) 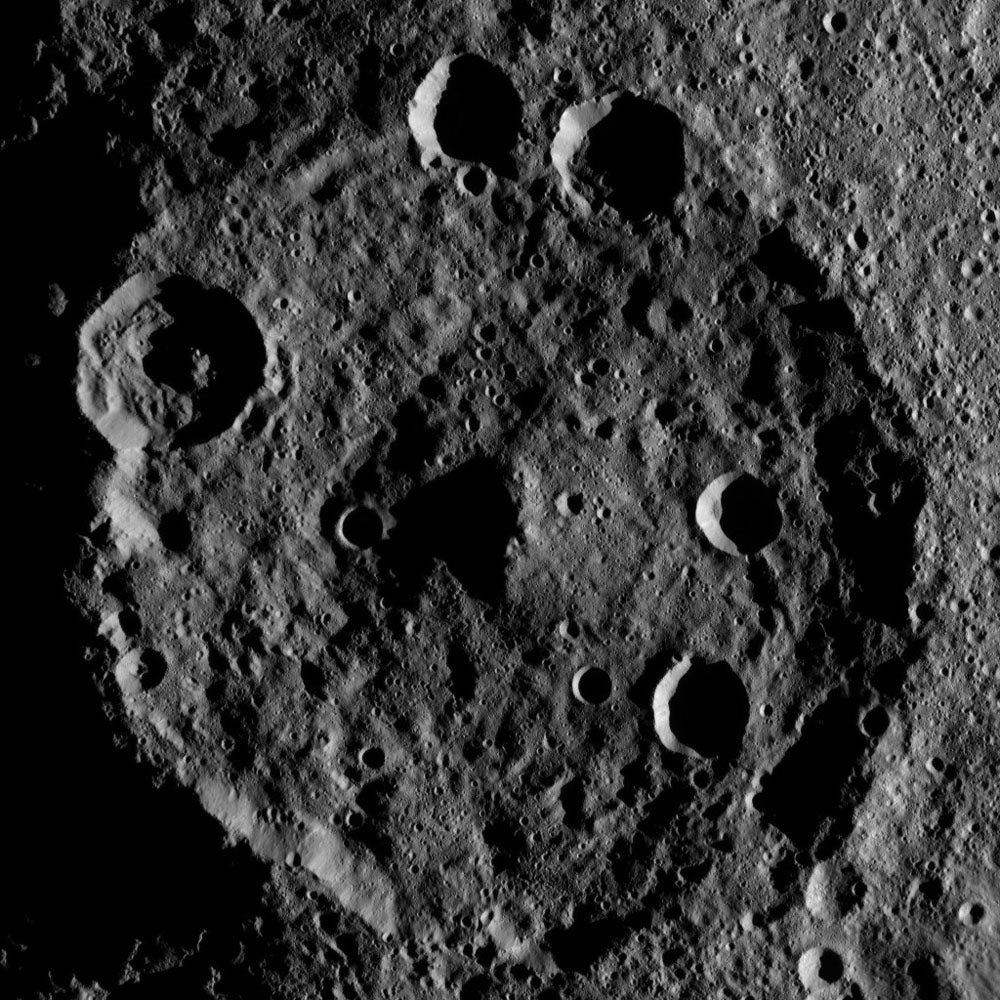 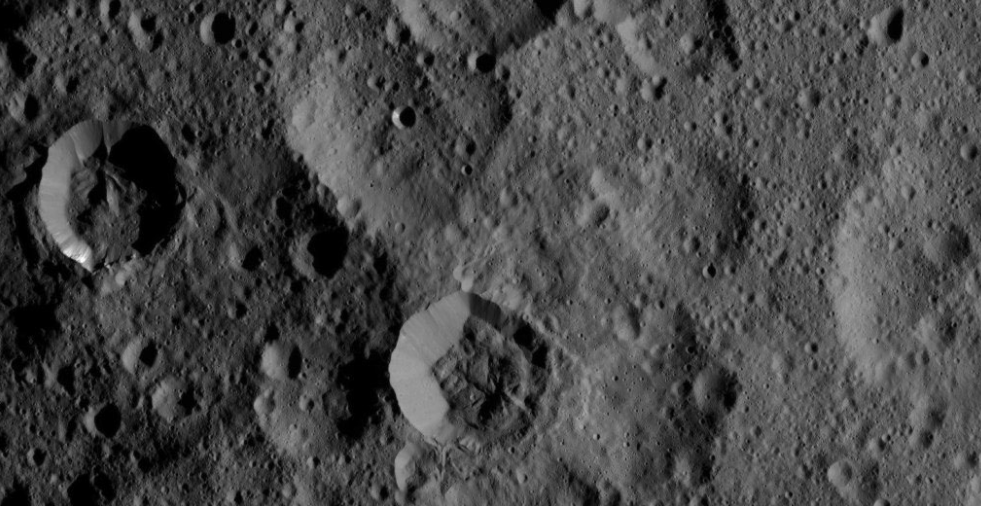 The craters Takel and Cozobi are featured in this image. Takel is the young crater with bright material on the left of this image, and Cozobi is the sharply defined crater just below center. (Image: NASA/JPL-Caltech/UCLA/MPS/DLR/IDA) 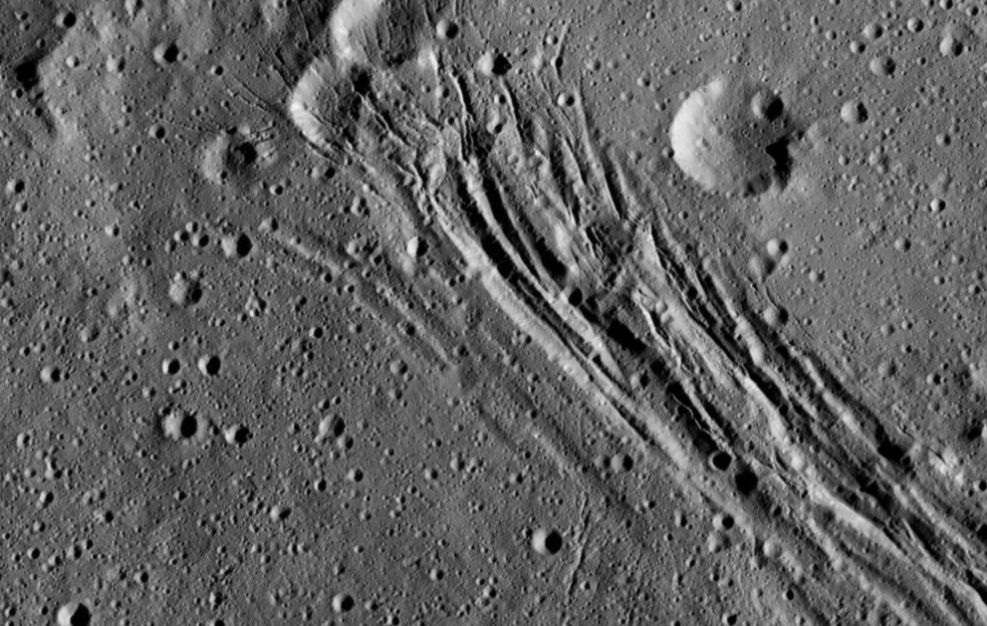 A series of linear features, which are depressions that are located within the large Yalode Crater. (Image: NASA/JPL-Caltech/UCLA/MPS/DLR/IDA) 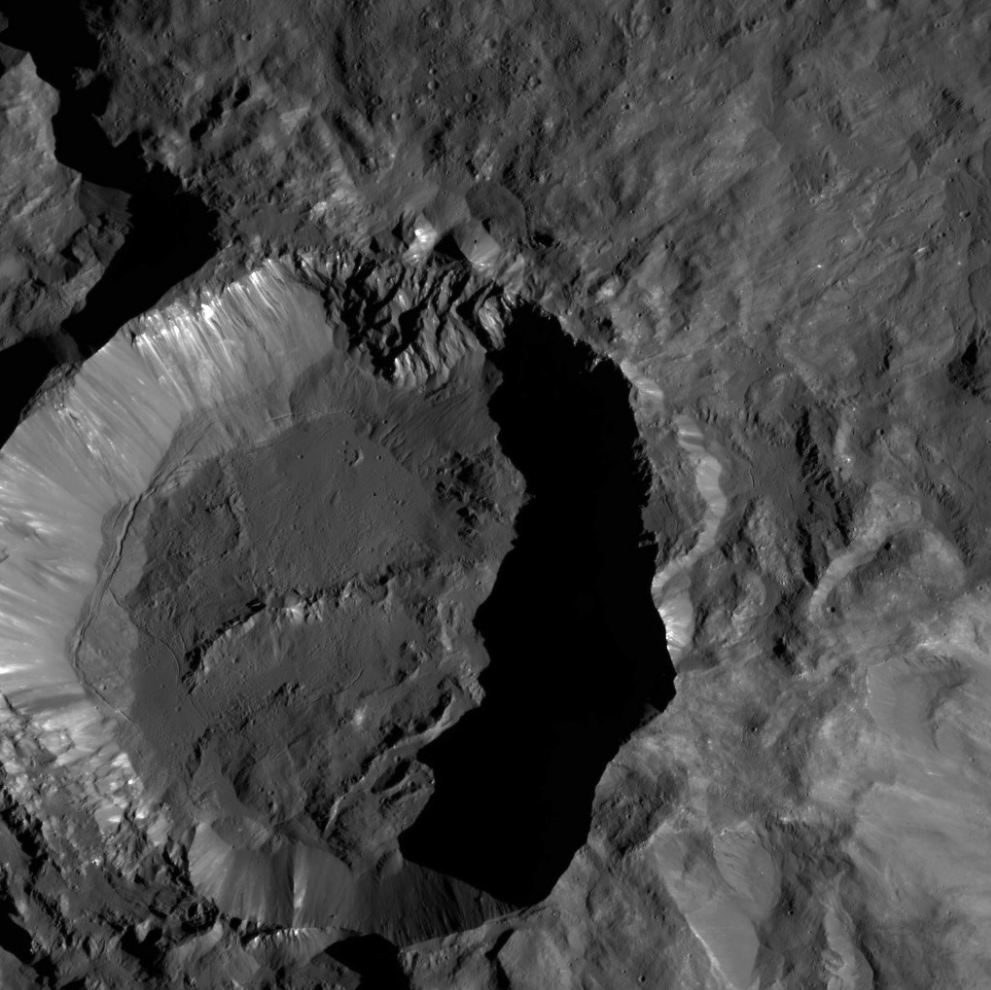 Kupalo Crater, which measures 26km across and is located at southern mid-latitudes. (Image: NASA/JPL-Caltech/UCLA/MPS/DLR/IDA)

NASA scientists also released a colourised photo showing what the dwarf planet would actually look like to the human eye. With help from the German Aerospace Center in Berlin, the Dawn team took images from the probe’s initial orbit in 2015, and then calculated the way Ceres reflects different wavelengths of light. It’s not a true colour image, but it’s pretty darned close. 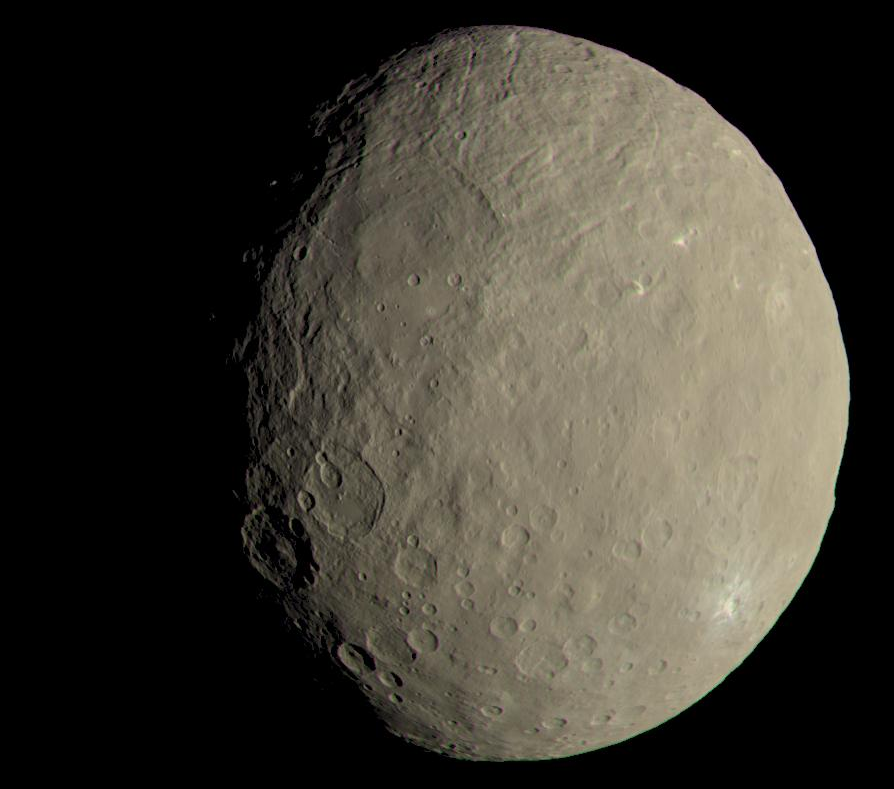 A colourised view of Ceres based on data collected by Dawn. (Image: NASA/JPL-Caltech/UCLA/MPS/DLR/IDA)

From here, Dawn will proceed into its sixth orbit of Ceres, attaining an altitude of over 7200km. During this phase, the probe will refine previously collected measurements, particularly those of the surface.